America has been going through one rough week.

The saying, "out of the frying pan, into the fire" comes to mind. That is to say, just as more and more cities and states across the United States begin the challenge of opening back up and trying to bring their economies back to life, America, as a whole, takes a turn for the worse.

Almost instantly, the news cycle switched from non-stop coverage of the coronavirus pandemic to non-stop coverage of the protests and riots, and what was already a stressful and tense situation in the re-opening of America has morphed into a whole new level of complexity. Moreover, only one week ago, a small business owner may have thought, "if I re-open my barbershop, will the customers come?".

Or perhaps an employee of a sit-down restaurant may have thought, "when I go back to work, will the people return to dining out?".

Most likely, the thoughts of "will my shop get looted or vandalized" or "will I get pepper-sprayed or hit with a rock if I have to flee from work" never crossed the business owner or the employee's minds.

Thankfully, as one scans the headlines this Wednesday morning, we're greeted with much less reporting of death and destruction as has been reported in the days before.

Hopefully, the breakdown in social cohesion has hit rock bottom, because it sure seems there is a lot of healing to do in more ways than one, with the economy and the markets being only part of what ails America.

Curiously, amongst the chaos, the US stock market has inched higher over the last few days: 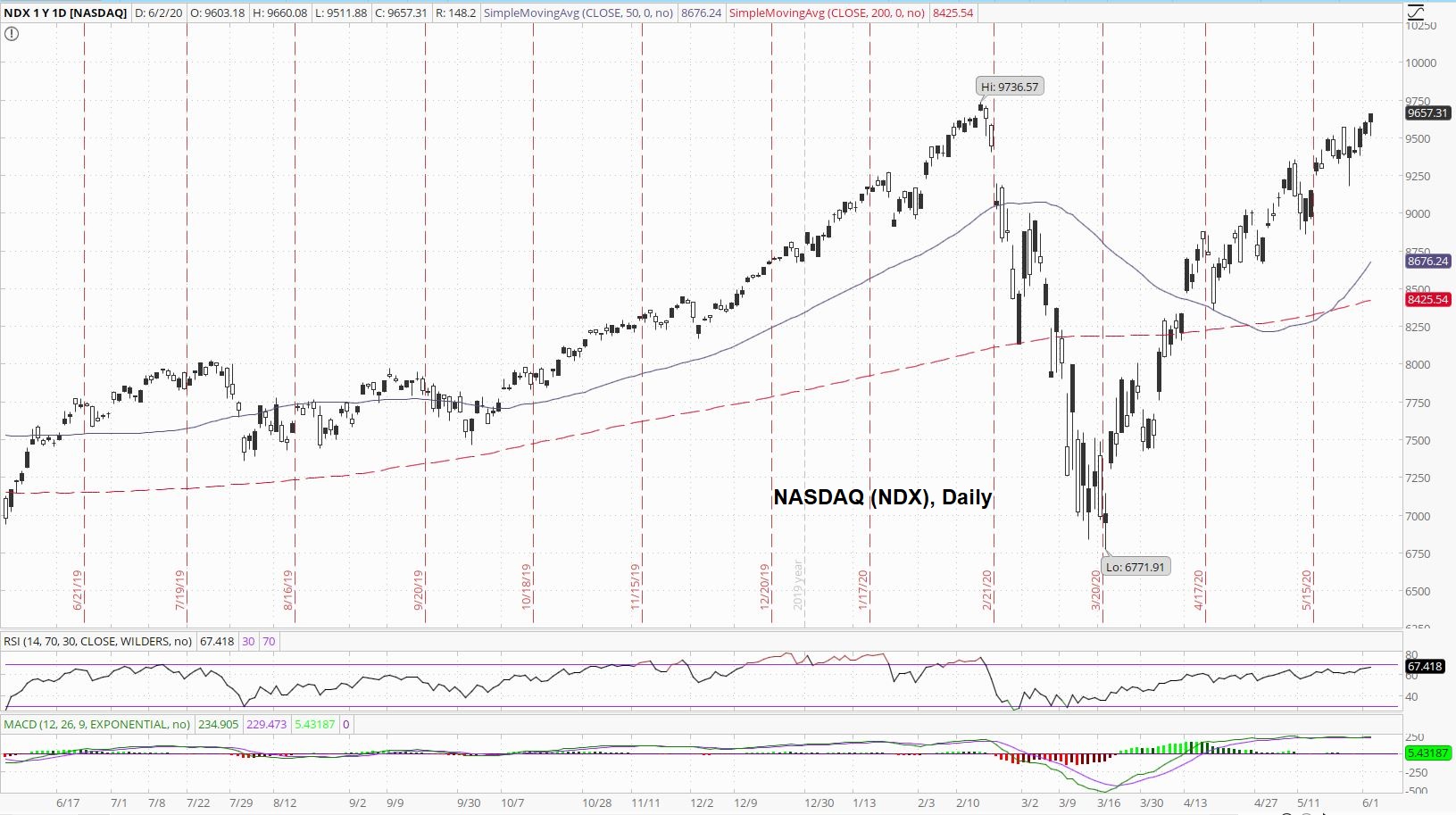 The Nasdaq is now less than 80 points from all-time record highs, despite the developments on Main Street.

The VIX has also continued with its recent trend lower: 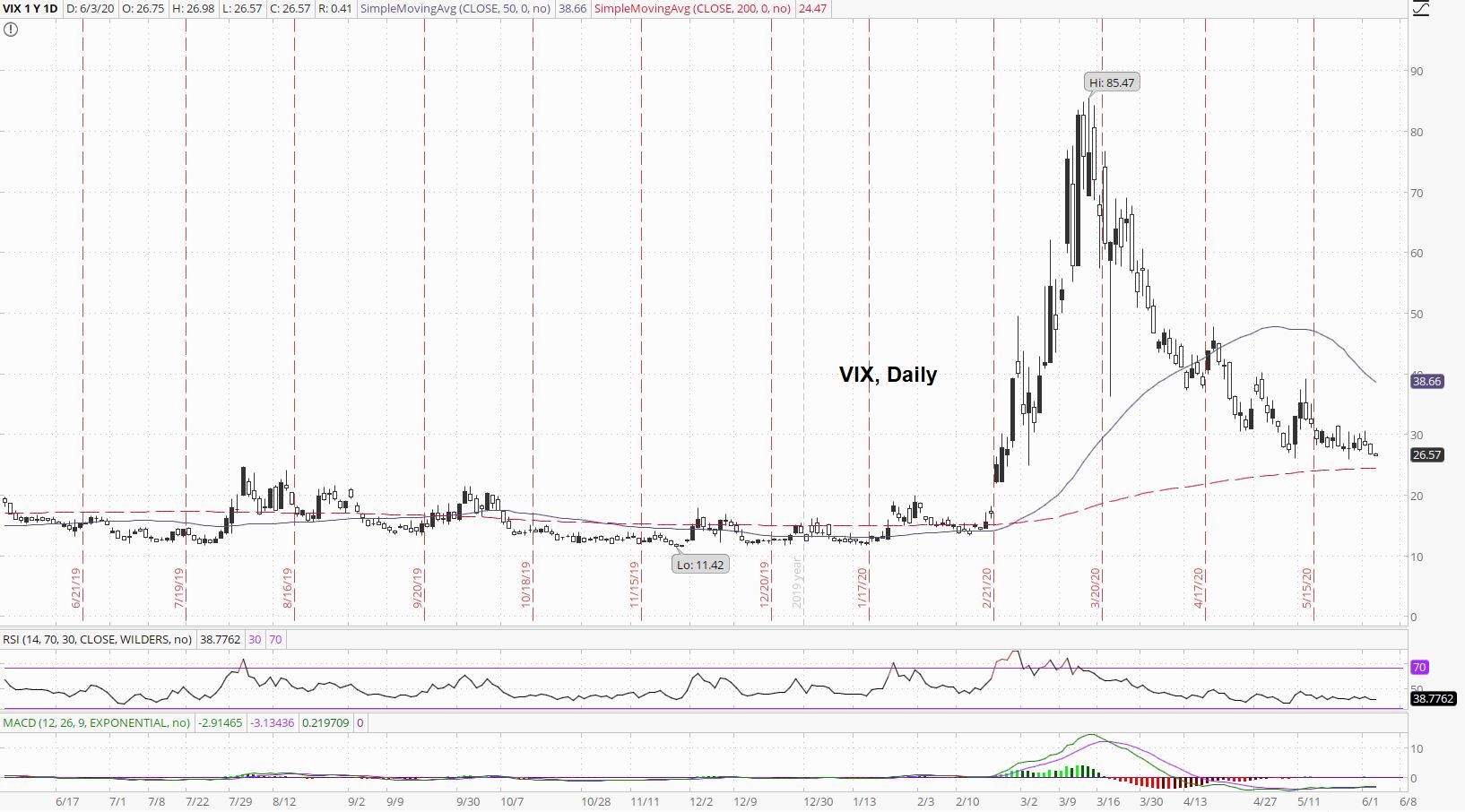 Another thing that has seen very little movement is the yield on the 10-Year Note: 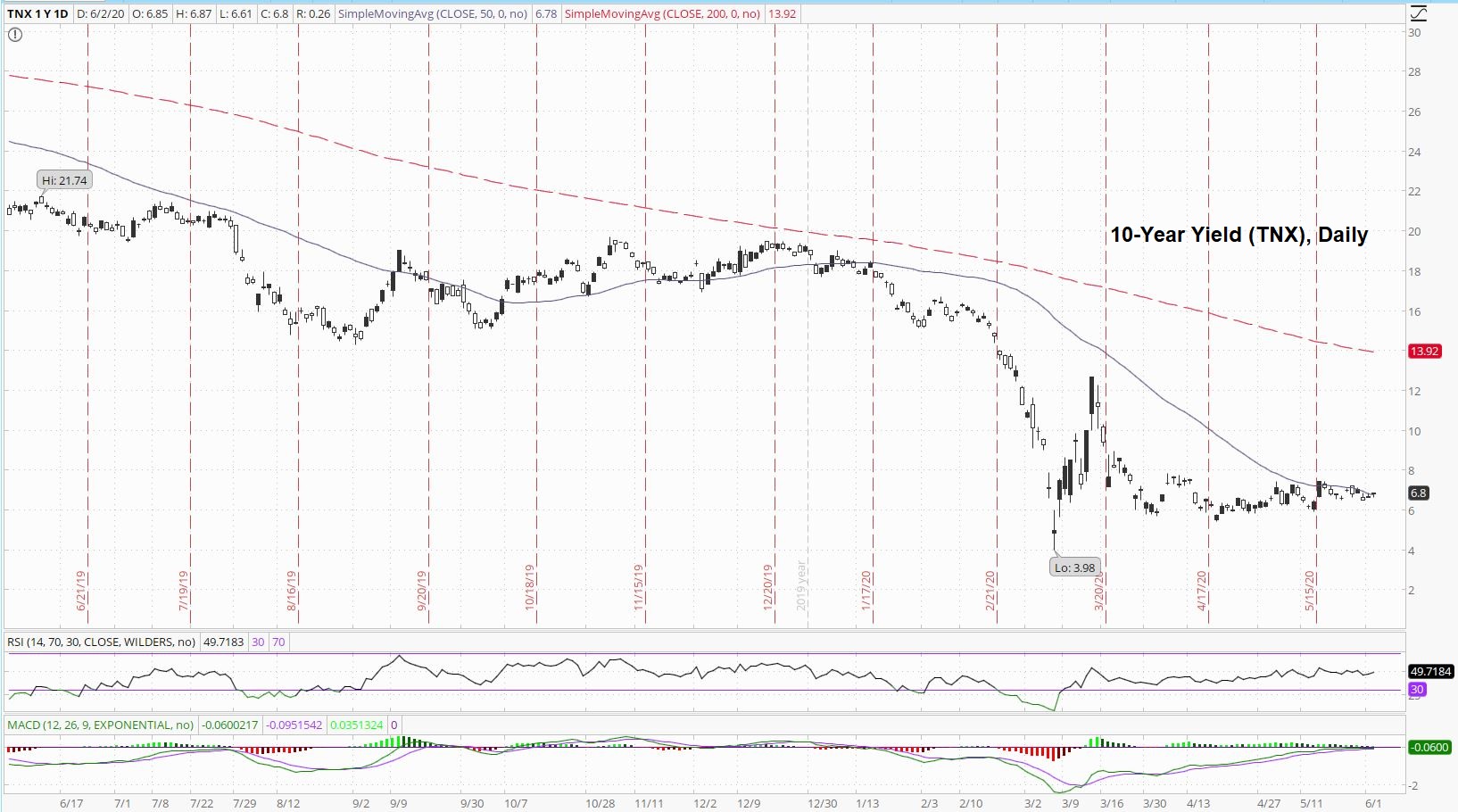 From the perspective of the benchmark US Treasury, there is neither a move into risk assets nor a move away from them.

The US dollar index looks to be falling for the seventh consecutive day: 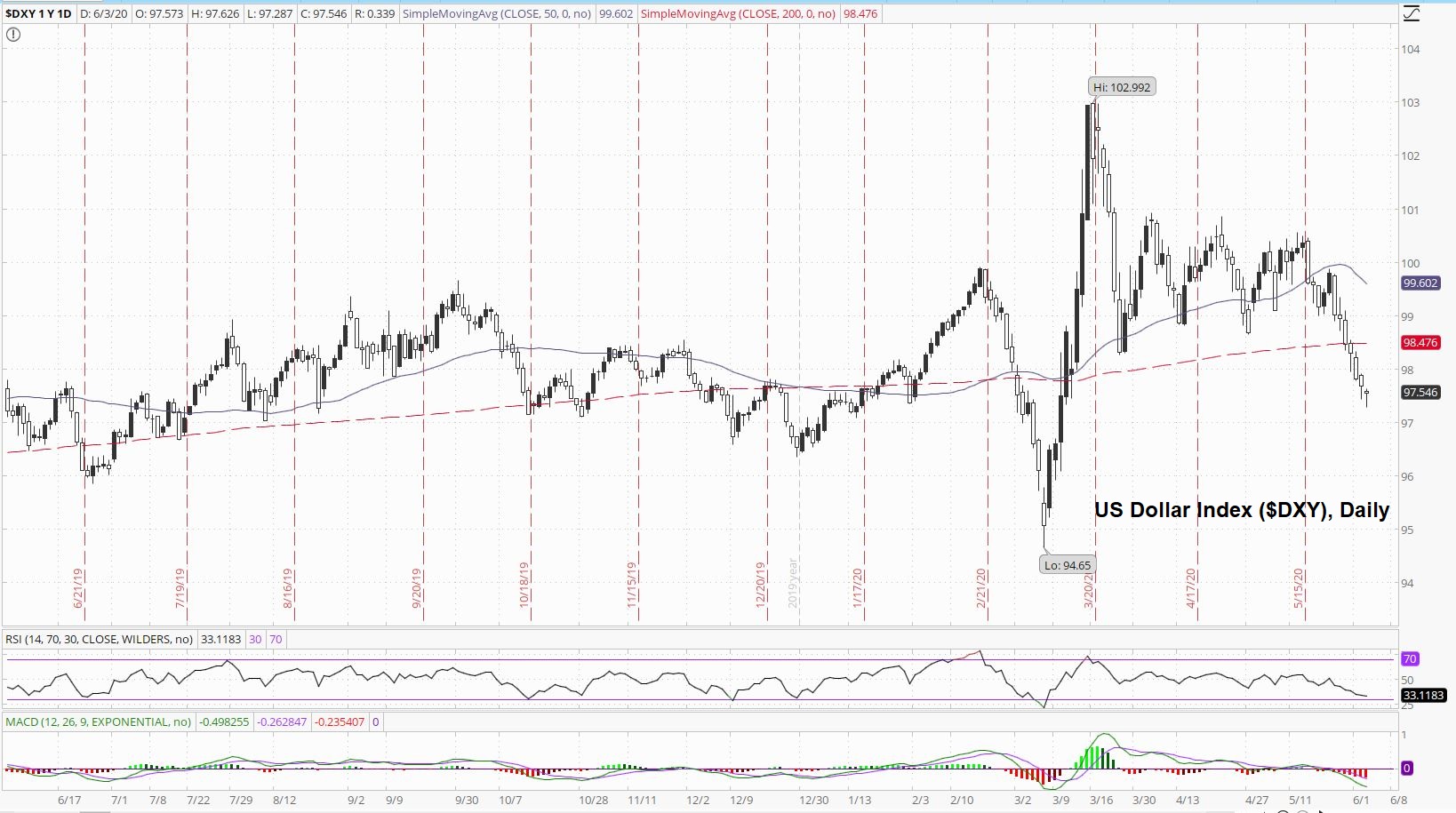 Between the re-opening of the United States and the protests & riots, tensions with China on multiple fronts have been increasing, which means currencies in general, and the dollar and yuan specifically, are likely to return into focus.

Copper continues to climb its Wall of Worry: 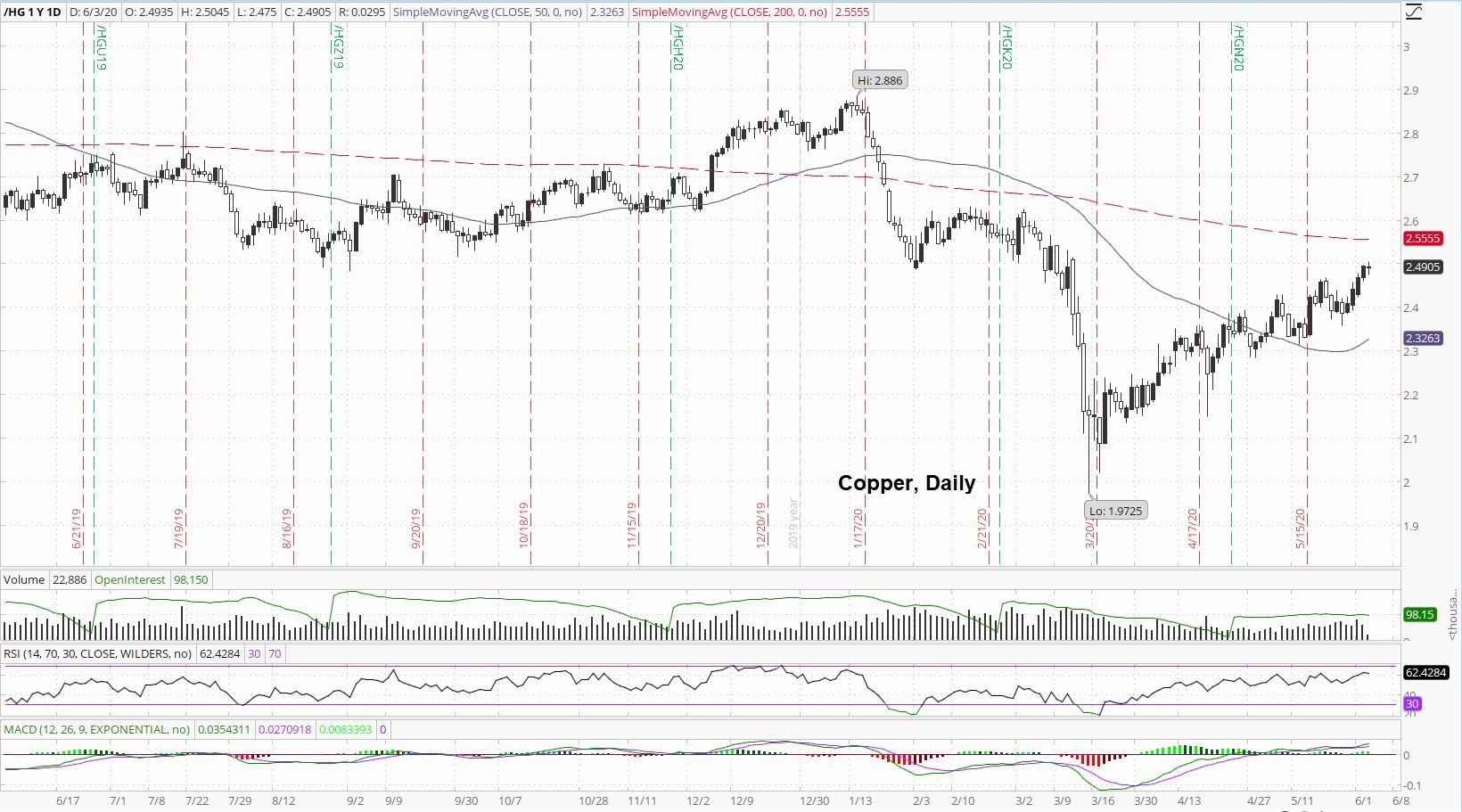 The question is, is the global economy done contracting?

Crude oil is up over 450% from its spike low of late April:

We're getting close to the point of finding out if we'll see a "V"-shaped recovery or not.

Deeper-pocketed, smart investors would not be wrong to see value there.

Palladium has seen very little trading volume, and its trading range is tightening:

Will that change as gold catches up to palladium in price?

Speaking of gold, the yellow metal continues to trade in its sideways choppy channel:

We are at a significant point on the chart, where a drop below the major moving average would normally trigger more selling, but if it is true that we're in a bull market, then it would also trigger dip-buying.

The gold-to-silver ratio continues to fall on paper:

Many Silver Bugs are surely getting excited about silver's continued outperformance of gold, as well as the coming crossover on the chart.

In the meantime, however, let's see if support at $18 holds:

There are several reasons to think $18 will hold, but even if it doesn't, the healthy balance between the bear case and the bull case sure is making things interesting!