Markets Get First Real Look At Economy With GDP This Morning

Today is a big day for the markets, and it just kicked off with the release of the first quarter GDP.

Suffice to say that everybody was expecting a contraction in the first quarter, and according to the US Beurau of Economic Analysis, GDP came in at -4.8%:

Recall, however, the "stay-at-home" orders didn't really start in earnest until the early to late part of March, which means that the second quarter, depending on when the states "re-open", and depending on how much things return to "normal", could be even worse.

This really is unchartered territory, and US GDP isn't the only thing on market participants' minds today.

At 2:00 p.m. EST, the March FOMC Statement "hits the tape", and at 2:30 p.m. EST, Fed Chair Jerome Powell will deliver remarks and take questions from the financial press.

In the same noteworthy sense as GDP, the last time Powell had a FOMC Press Conference, the coronavirus was not the main news, but rather, developing news. The main news affecting the markets at the time were the Phase One Trade Deal with China, the impeachment, and the rising tensions in the Middle East. The coronavirus was discussed at the Fed's last FOMC, but that was very early on in the pandemic.

So it's worth repeating: The markets truly are in unchartered territory, so as far as the short-term goes, we could see some volatility coming back.

The VIX, however, has basically gone in one direction since topping out on March 18th: 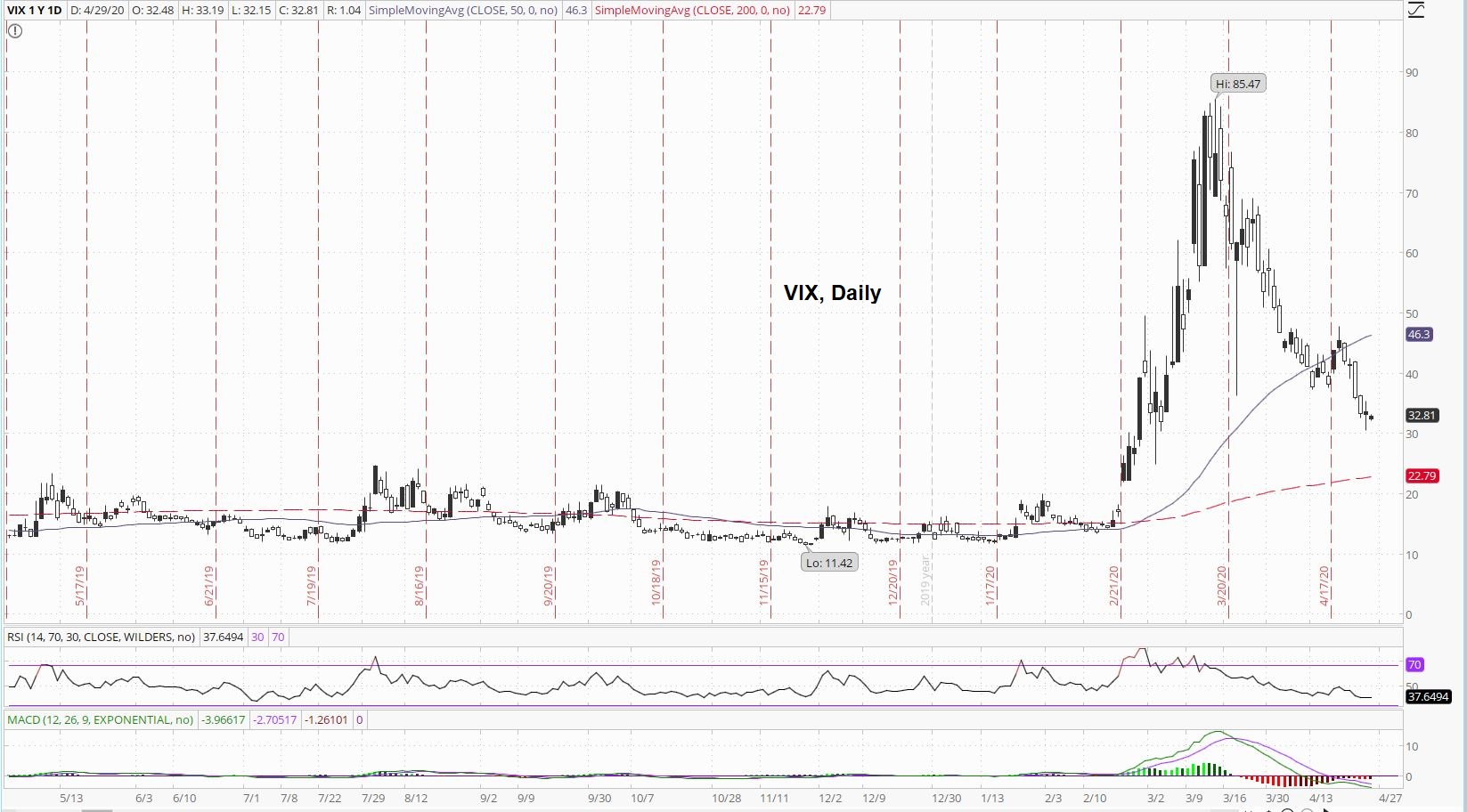 For now, fear in the market appears to be waning, at least on paper.

Either way, the Dow is back above its 50-day moving average: 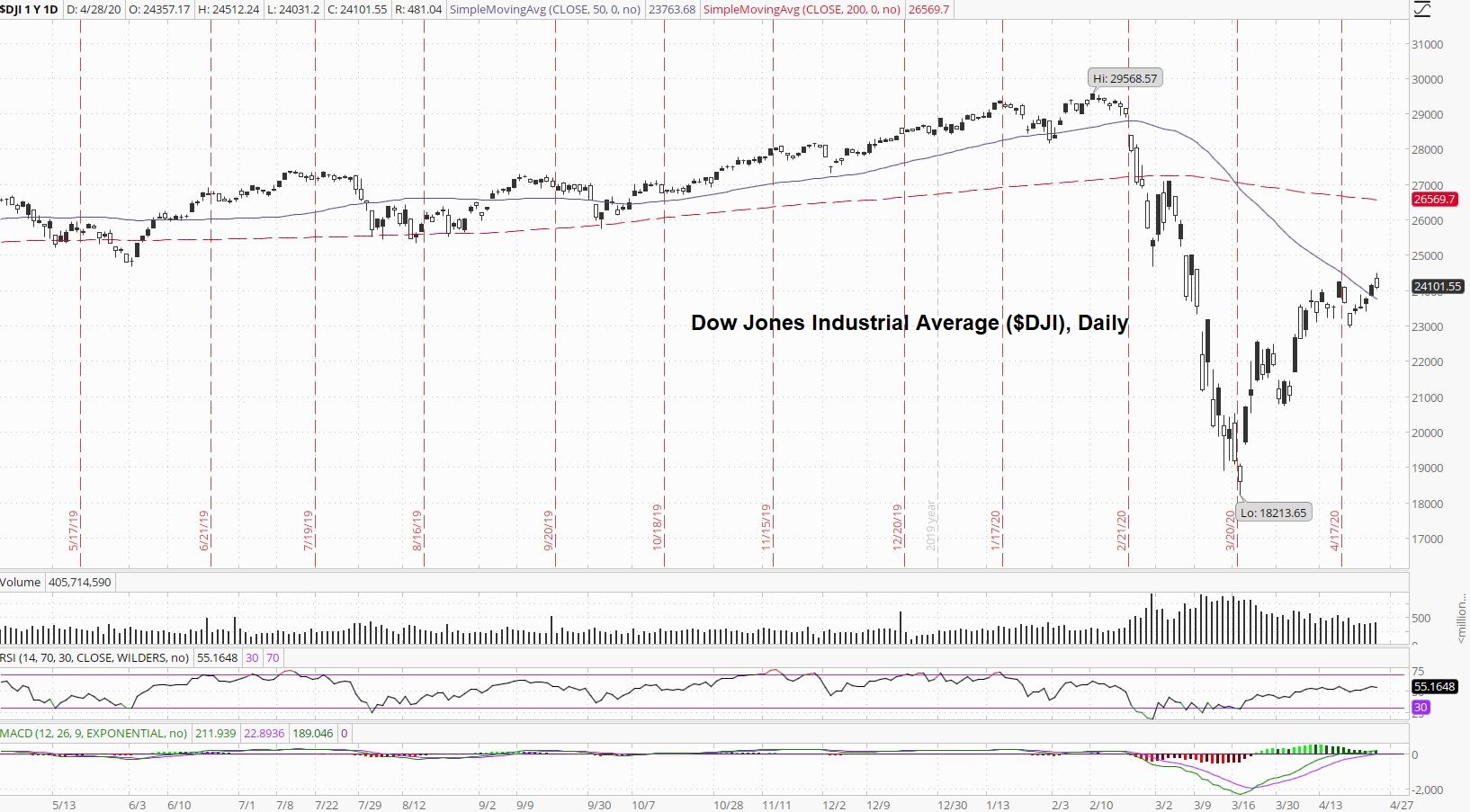 Is the Dow bullishly breaking out of the overhead resistance of the 50-day moving average, or are we in one epic bear rally?

If it seems like we've been talking about 0.6% yield on the 10-Year Note for weeks, we have: 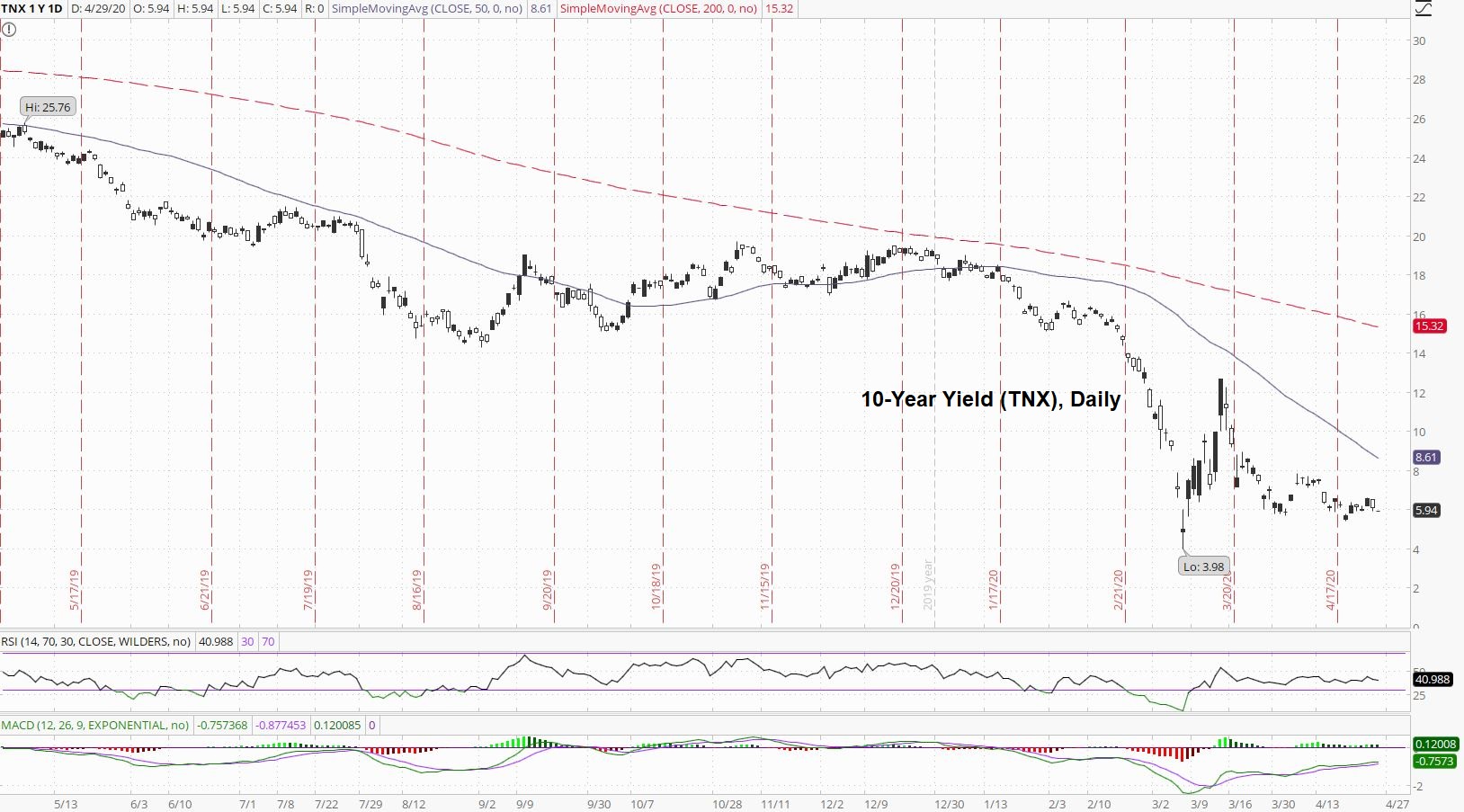 For now, 0.6% looks like the sweetspot for 10-year US Government debt.

If the US dollar index is in a wedge, it's close to the break-out or break-down: 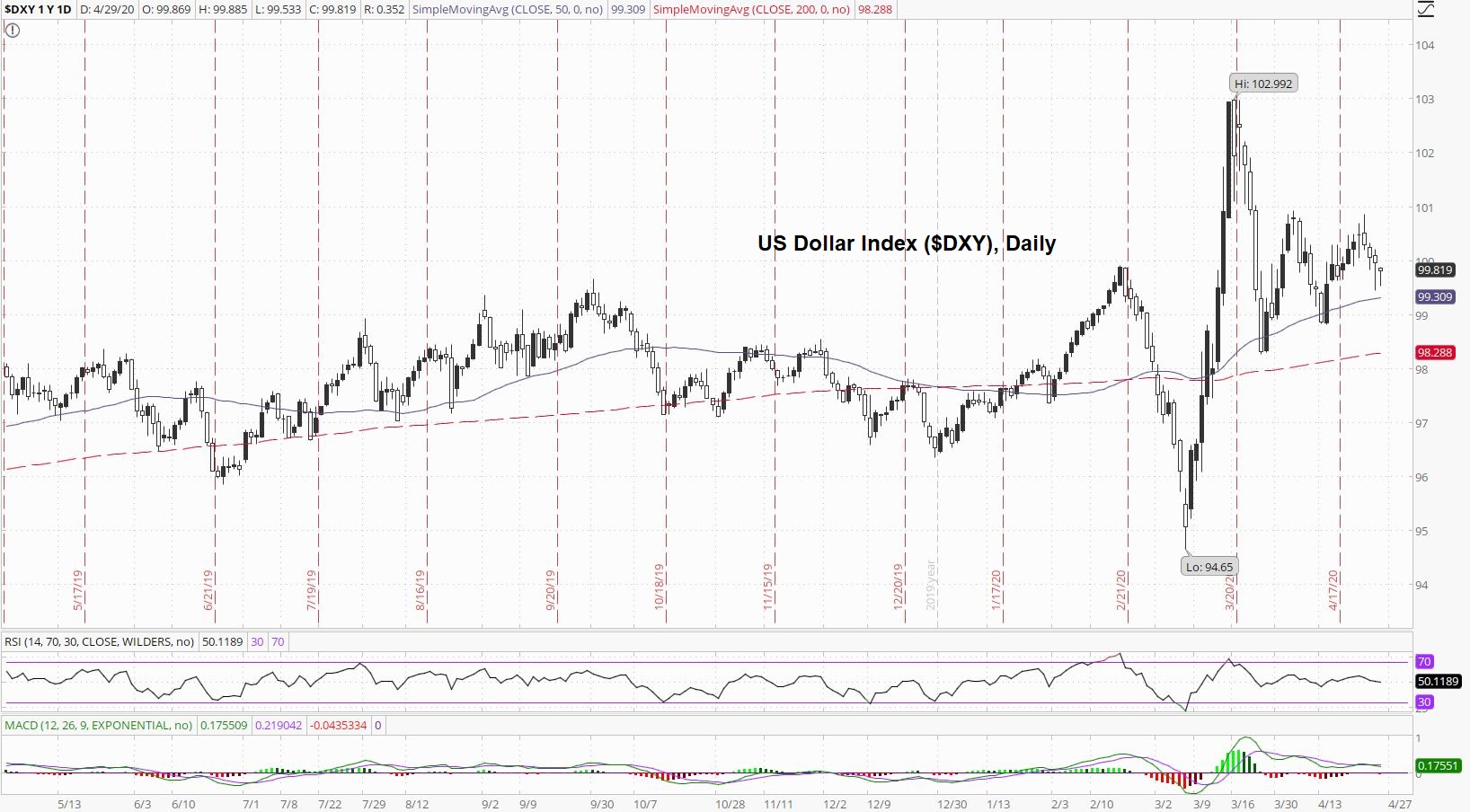 Notice, however, that taking out the wild swings from late February through late March, the DXY has basically been straddling its 50-day moving average for the better part of a year. 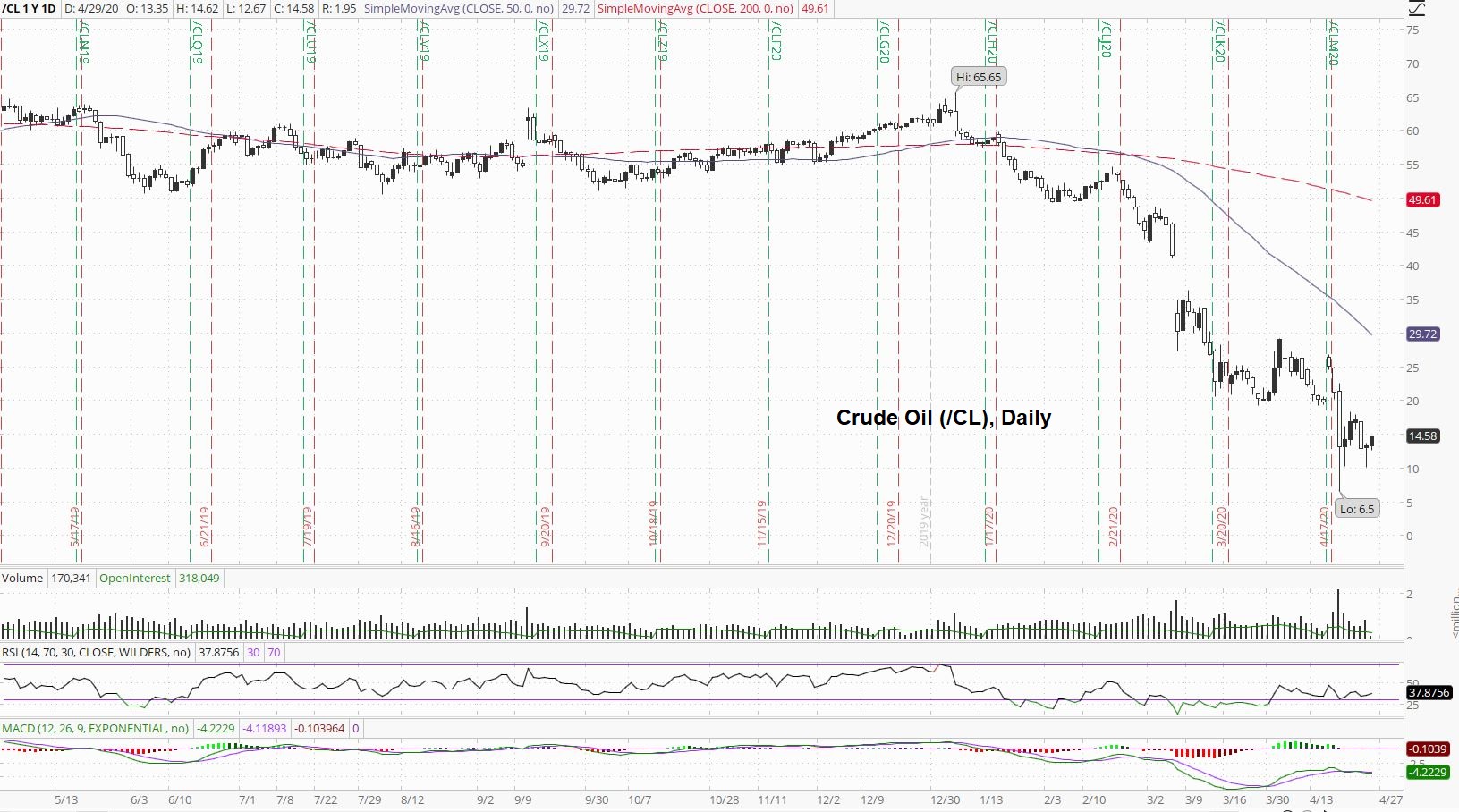 Since there's only so much crude oil that can be stored in above-ground storage, at refiners, and on floating oil tankers, that spike low to a 6-handle may not even be the last of the single digits we see either.

Copper, however, is signaling that the bottom could be in: 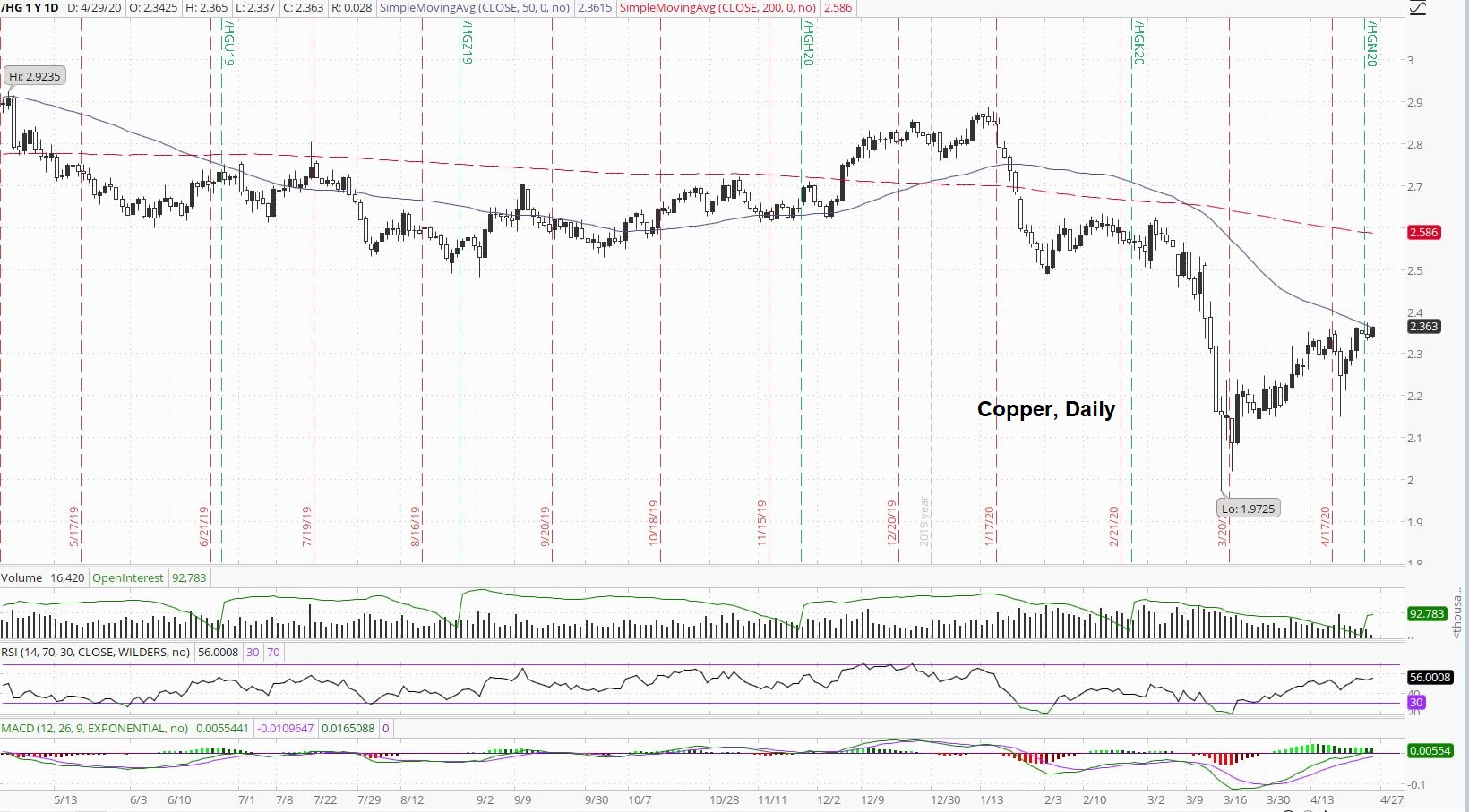 Copper is often used for a barometer of the economy overall, and in that sense, if the bottom is in, next comes the commodities price inflation.

It is noteworthy, however, that although not shown on the copper chart above, copper did not put in a lower-low from the low put-in at the beginning of 2016 ($1.93).

Platinum looks like it could be finally breaking-out of resistance: 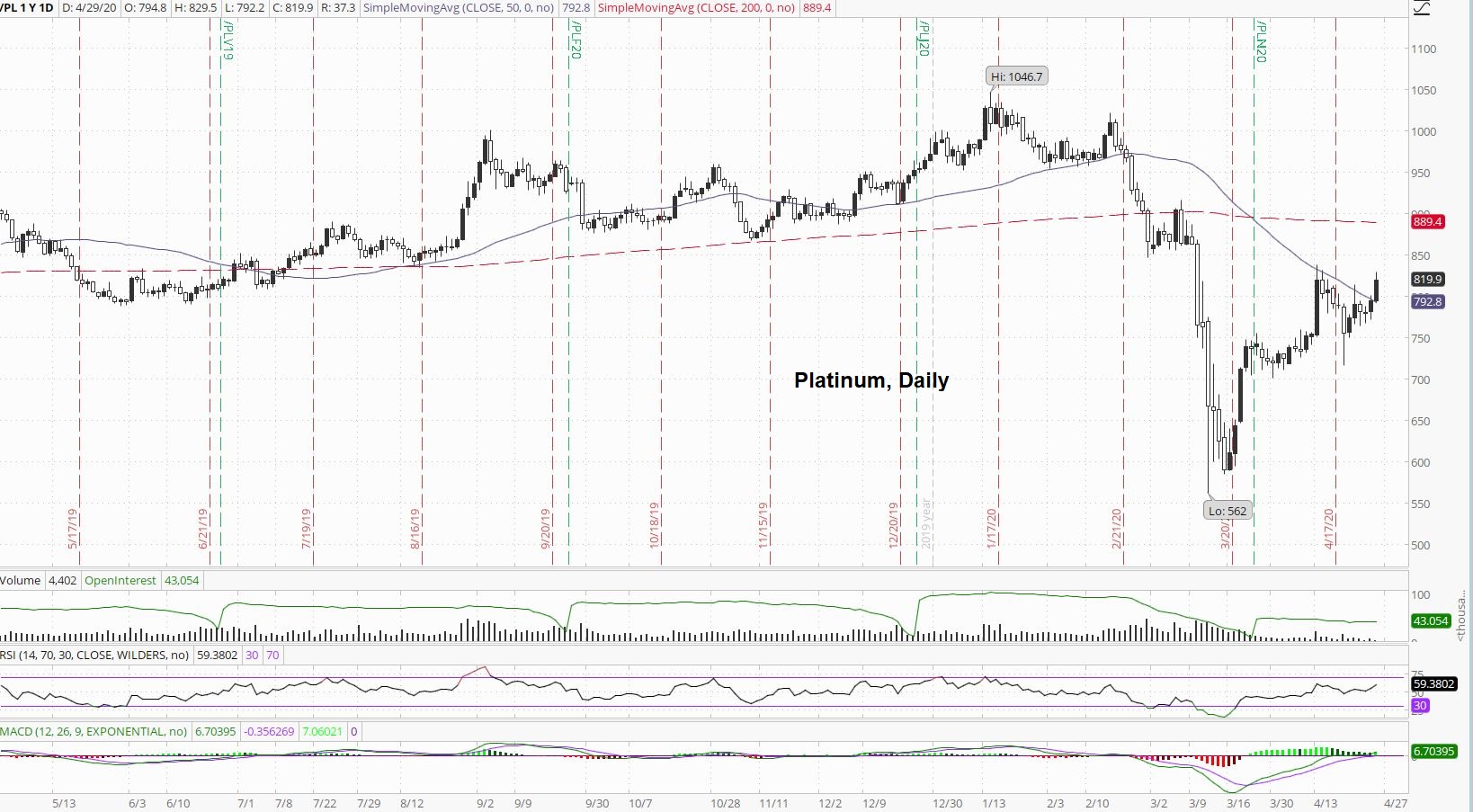 If platinum is breaking-out here, we may not be talking about the 200-day moving average but fresh new 52-week highs.

Here's the question: Will platinum catch the "flight to safety" bid we see gold and silver catching?

For deeper-pocketed investors looking for an alternative to gold, platinum looks like a good value here.

If all four precious metals catch and maintain that flight to safety bid, it may not come until later for palladium: 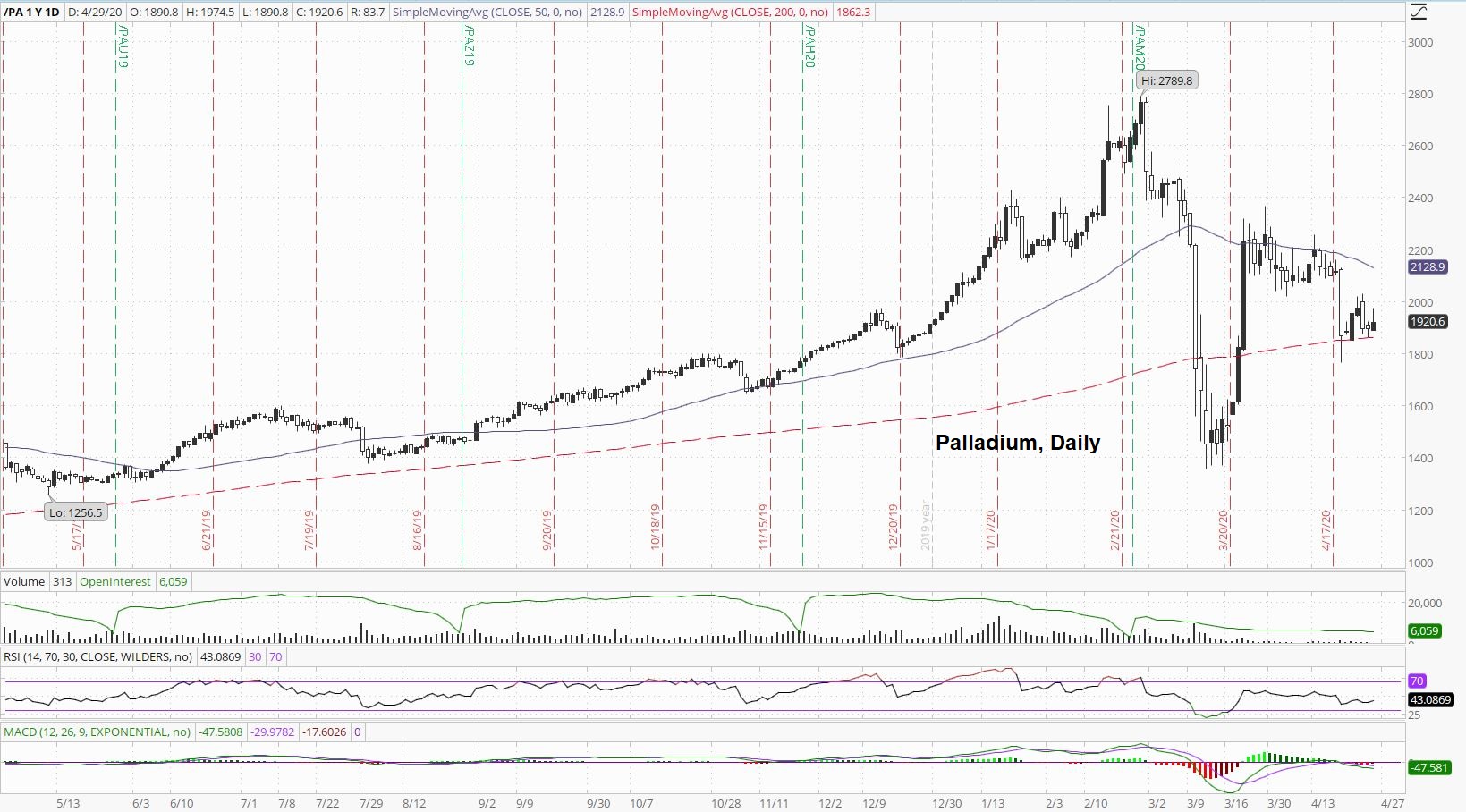 Palladium has been the shining precious metals star for years, and it may take the other metals reaching parity, or possibly over-shooting palladium, before a flight to safety bid begins in earnest. 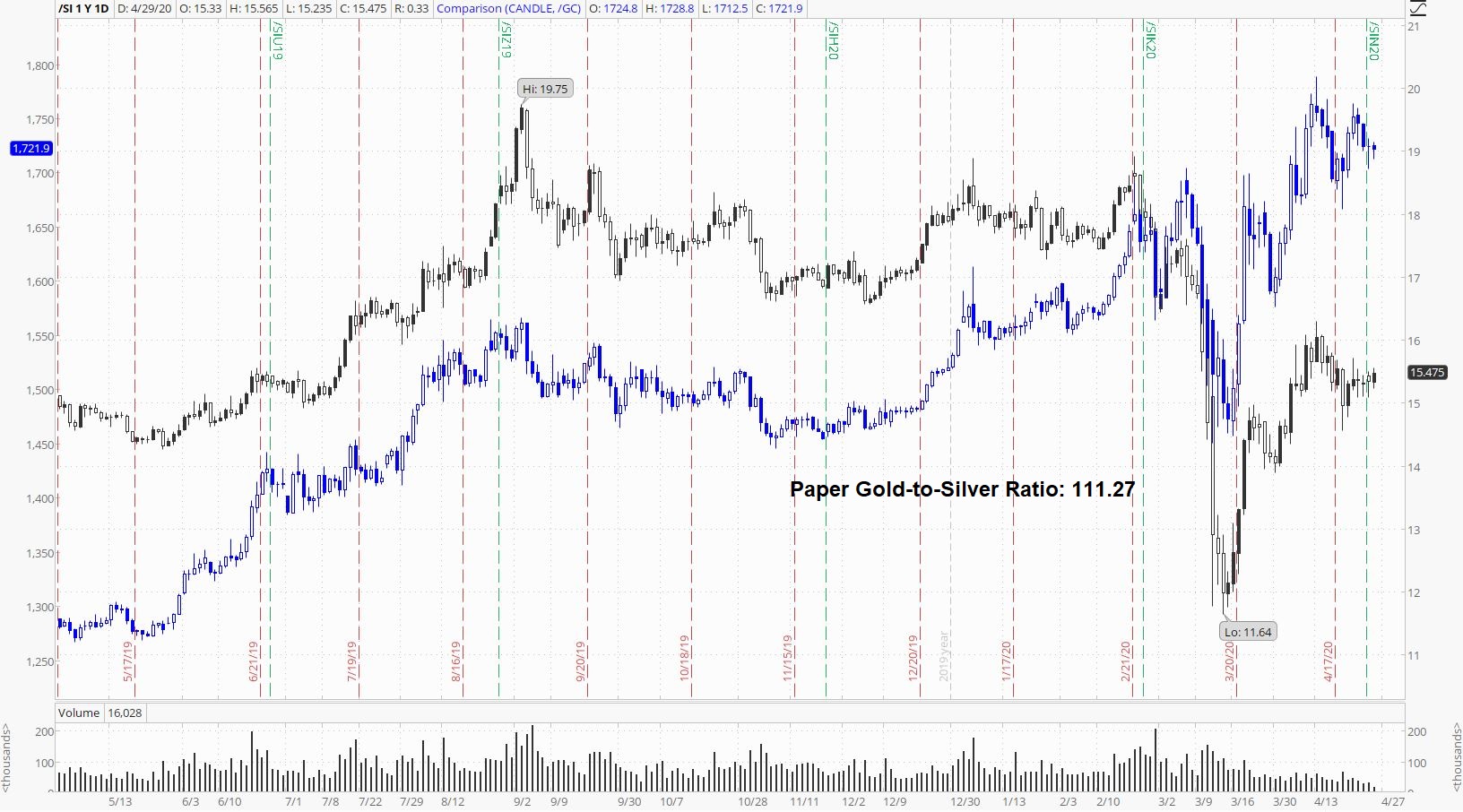 The gold-to-silver ratio arbitrage play is, arguably, one of the most interesting opportunities in all of investing right now becasue it's one of the few active, once-in-a-cycle opportunities.

The question is: Is it possible to get anywhere near 111 ounces of silver for one single ounce of gold?

Speaking of the price of gold, check out this consolidation above $1700: 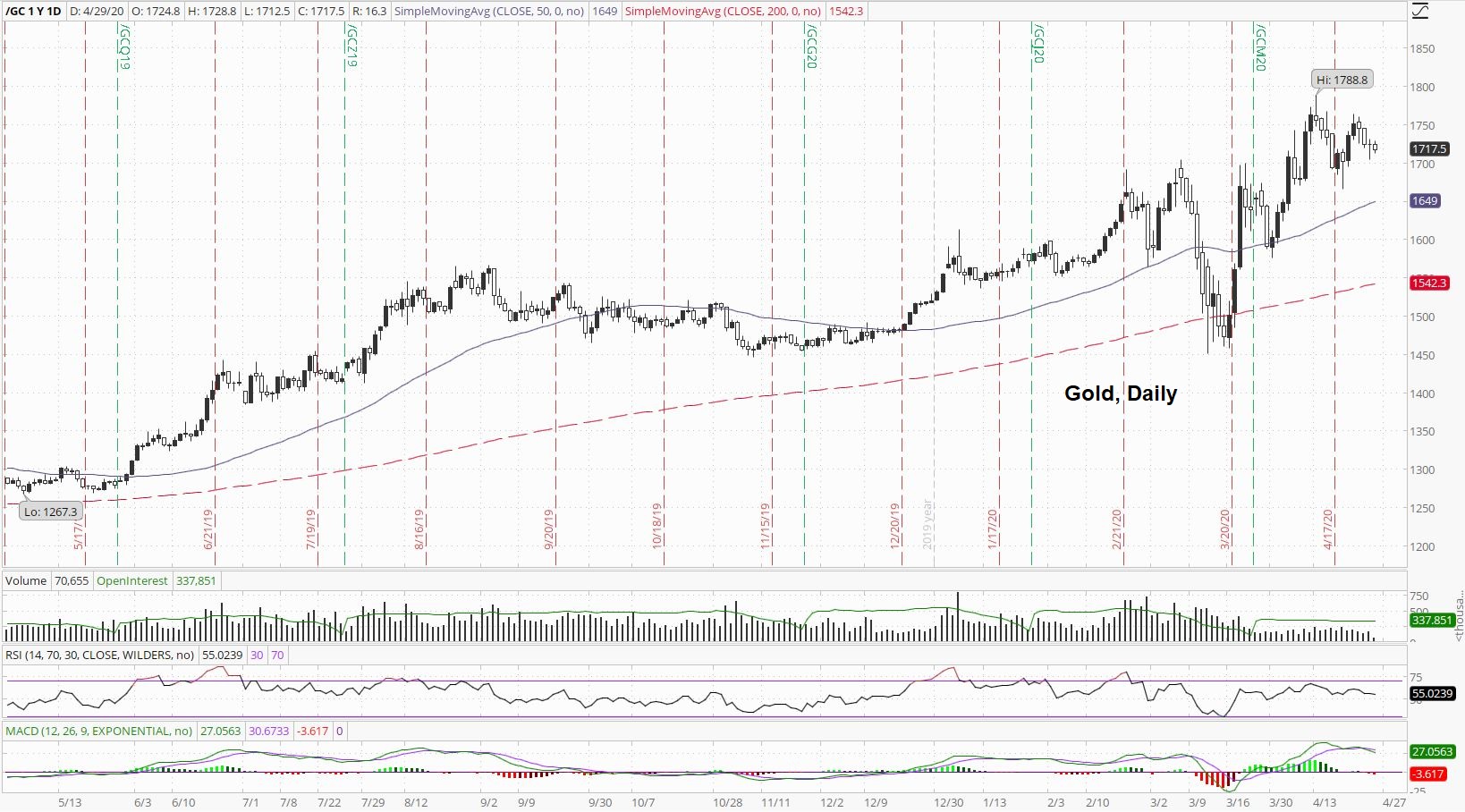 Some analysts might point to a "double top", but that would be something only valid for the very near short-term, and only something for trading, which I do not advocate.

Trying to catch short-term tops and bottoms in price could end up being more costly than simply dollar-cost-averaging with measured investments.

How can that be?

The paper futures market, price doesn't accurately reflect or take into account any premium to get gold "in-hand", and all physical gold comes with that premium, no matter the size, so if an investor is looking for a $50 pullback in the paper price of gold, but premiums on 1-ounce gold coins, for example, go up $75, it would actually end up being more expensive to puchase the coin since the premium more than offset the decrease in the paper price.

I call that "premium creep", although lately, it's been more like spiking premiums to entice sellers to sell.

The silver price is still, arguably, the most undervalued investment on the planet: 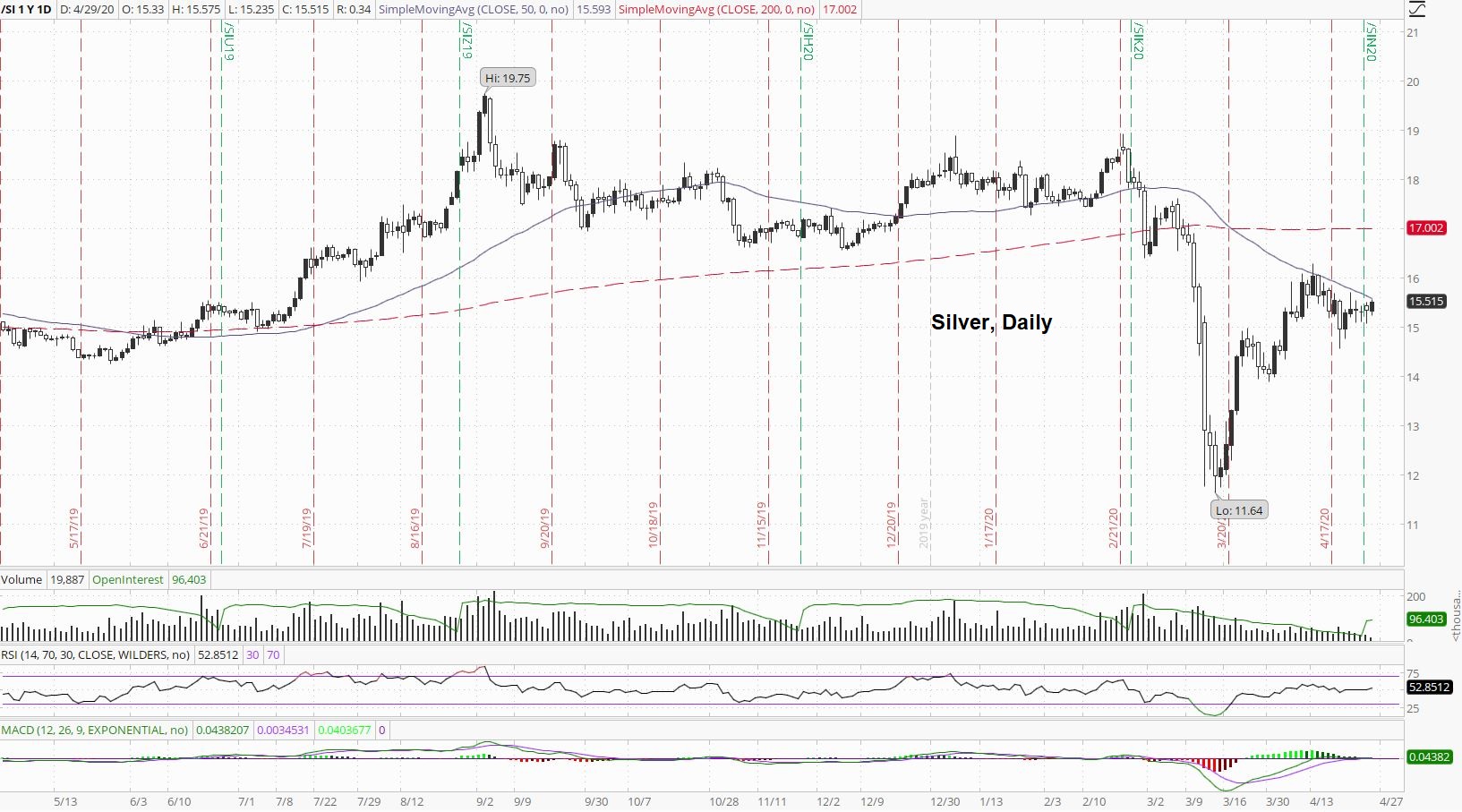 If I had to choose my dream team for the now postponed Tokyo Summer Olympics, I'd pick silver for the gold!

Pun intended, and not.