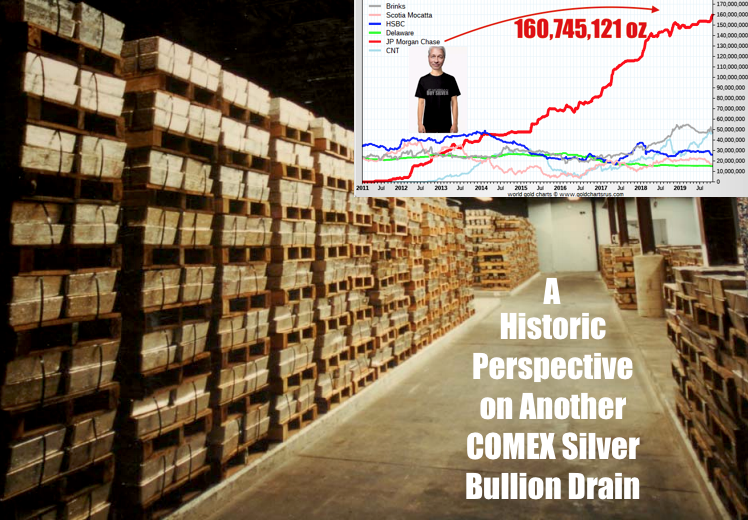 You might be wondering where this SD Bullion blog article's silver bullion vault and depository image is from.

It catches but a glimpse of 60 million ounces of silver, (in non-homogenous industrial 1,000-ounce silver bullion bars), all then held in a silver bullion depository by the Wilmington Trust.

It was documented by Jeff Christian’s CPM Group, a silver price forecaster who is also silver and record gold price bullish headed into the early 2020s.

Knowing the just in time nature of silver bullion depository holdings during the late 1990s. Almost certainly all that silver you see in the shot has been used up in silver bullion investments and thinly laced into everyday items we mostly still can’t thrift out of future silver demand.

Even now all silver items hardly ever get recycled, at these historically depressed fiat silver price points.

By the time that pic was shot, silver bullion was already heavily draining out of the then, less leveraged COMEX silver warehouse system.

See the following chart to confirm that claim. 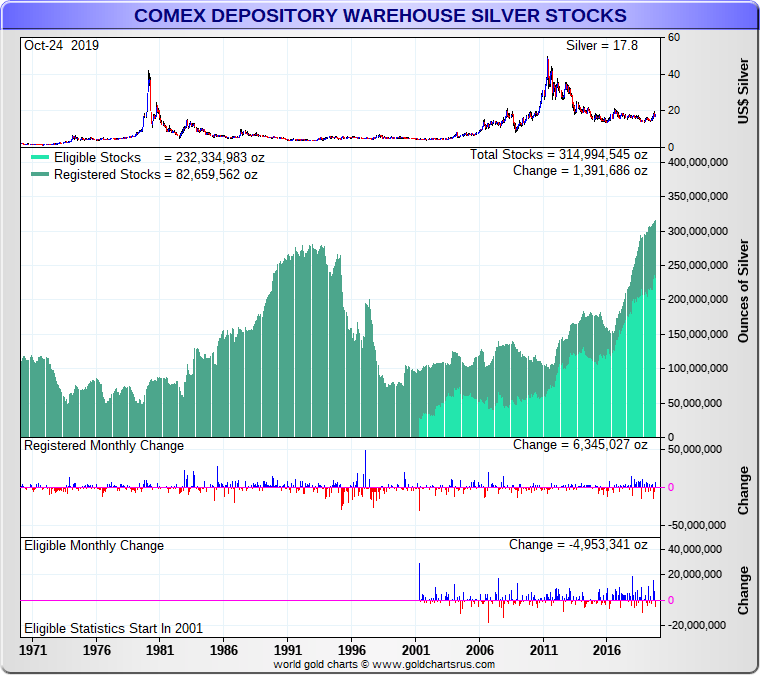 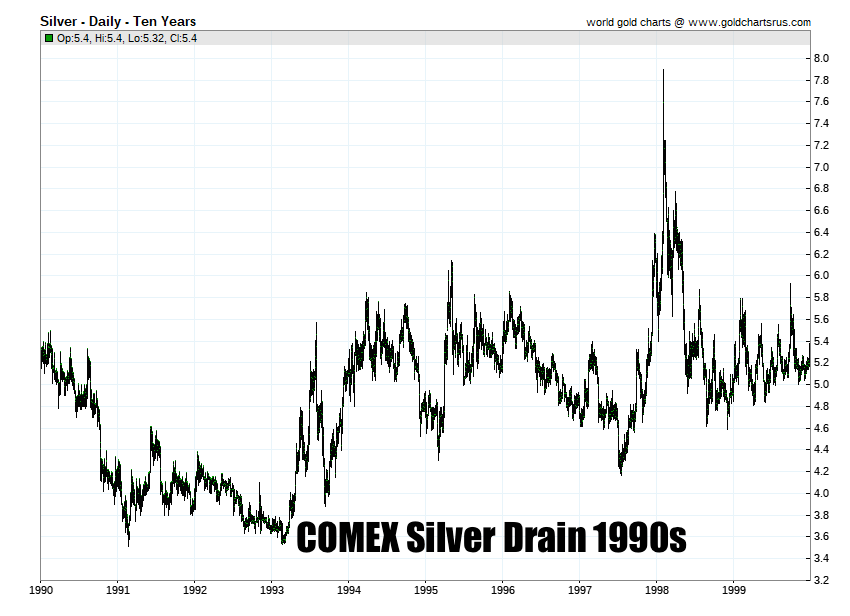 This newest record-sized COMEX warehouse position is now likely nearing its peak too. That claim based mainly on the bullishness building in both gold and silver. The massive bases built over the 2010s moving into the 2020's financial system comeuppance.

In the next COMEX silver bullion drain, we expect it may even shrink faster than last time given the leverage and scale of the financial issues at hand. And the fiat silver price action will likely have way more upside volatility than even the mid-1990s doubling or the 2001 to 2011 silver price history that followed the 1990s drain.

Swinging back to present-day silver markets, and now looking out into the 2020s collectively.

The recent JP Morgan RICO arrests by the Department of Justice for precious metals market riggings over a 9-year timespan made many of us all pause and think these last few months.

What a freaky silver saga this has been. We probably only know a trace of the twisted reality too.

Impossible to not be become further curious to see if this too-big-to-fail, but now bail-in-able bank's dominance within the COMEX silver market will continue unabated.

Judging by today's data downloads, perhaps it will, for the foreseeable future.

But we are also here today to put this into further historic context.

Think Bear Sterns getting smoked by silver longs in early 2008.

The JP Morgue, as it was crudely referred to in popular Youtube 'Talking Bear Cartoons' following the 2008 financial bailout era. It remains perhaps the most systematically important bank (see pg. 3). Allegations also abound that the bank also remains essentially a financial criminal operation that should be nationalized and broken up for the betterment of our nation.

Over the past decade like many of you, the JP Morgan has stacked large swaths of both gold bullion and most obviously silver bullion, adding large chunks to its COMEX warehouse depository of late. Few know how much bullion the bank truly holds unreported in its London silver depositories and gold vaults.

According to the latest most transparent data, JP Morgan's cumulative physical silver holding on the COMEX has breached the 160,000,000 troy ounce mark. 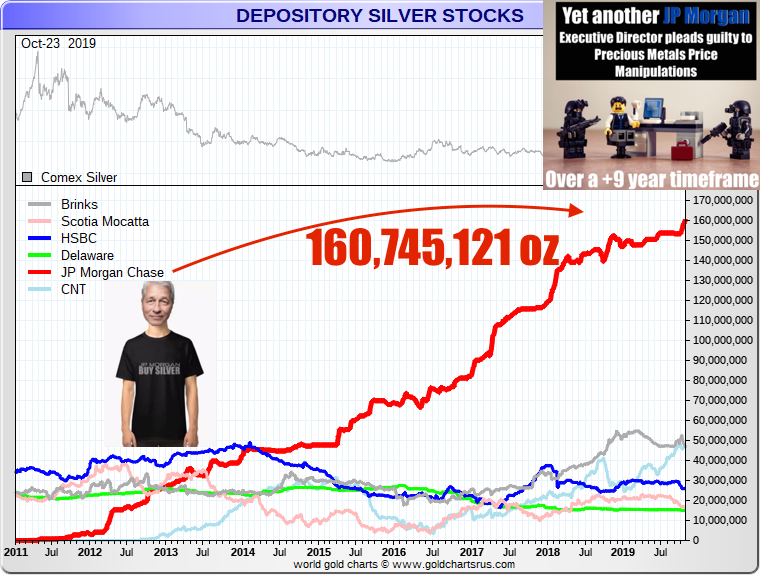 Of course in COMEX silver and private silver hoarding terms, this amount of "Who has the Most Silver?" figure is record-breaking.

The bank's aggregate +160 million oz position too is over 50% of the fractionally reserved silver bullion warehouse holdings which COMEX silver price discovery leverages to sharply move the silver spot prices we see day to day in all fiat currencies.

No single alleged silver market cornering entity in the modern financial era has amassed silver bullion stacks of this size. Not even the likes of the Hunt Brothers or Warren Buffett's Berkshire Hathaway.

Almost no silver market participant can even know the amount of silver bullion that JP Morgan owns for its account either within this COMEX pile nor pulled out of SLV (from which they are an AP and the custodian).

Tracking CME Group documents, we see that over a long span of their alleged RICO precious metals market rigging timespan, almost 60% of JP Morgan's stopped and delivered silver futures contracts went to their house account. That is just over 85 million ounces in just under an eight-year timespan.

If one takes a dive down the silver price discovery rabbit hole, it becomes clear rather quickly that futures contract derivative bets are pricing silver bullion about as often as the COMEX silver contracts are settled not in physical silver bullion, but in fiat Federal Reserve notes. Over 99% of the time in other words.

What is also clear looking back at recent 2010 silver price and 2011 silver price history is that JP Morgan was physically short a lot of silver bullion in the last major run-up for silver prices.

They were likely sitting on a lot of potential losses had the then silver spot price rose above $50 oz and sustained an over three-decade-long price breakout. It was then only three years prior that silver’s rising price helped contribute to Bear Sterns’ bankruptcy proceedings.

If you put into context JP Morgan’s current record-sized pile of COMEX silver bullion holdings versus how much silver India alone is buying in 2019, it further crystallizes the unintuitive way a precious item like silver gets priced the world over.

Poor farmers in India are told what the price of silver will be by those closest to levers of financial power for the most part. But occasionally though, the silver bulls overrun the bears, and the silver price and demand get nutty again. 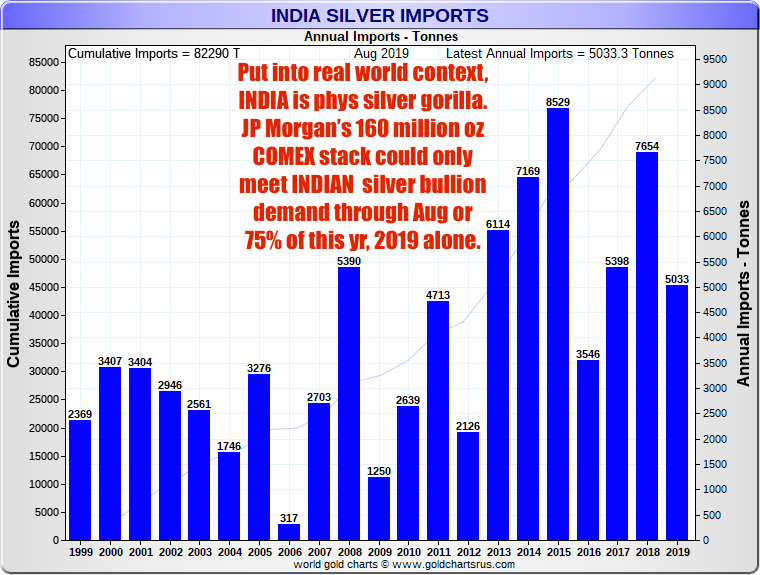 Often COMEX silver and gold delivery guardians repeat the fractionally true mantra that heavy silver contract deliveries are not a real threat to their highly leveraged system. Surely without physical silver to deliver the silver futures COMEX derivative casino can perhaps still run cause speculative bets and legit price hedging is still a necessity. But good luck with any credibility and somehow keeping price discovery power if fiat only settlement becomes your commodity market's future.

Interests who like silver appearances to be sanguine might feel better knowing there are always force majure COMEX clauses that ultimately allow silver futures to be settled in fiat in a real physical silver delivery default scenario.

But the bad news for them is that silver bullion investment demand can turn on a silver dime, so to speak. And every few decades or so silver reminds everyone that it remains money to many. And it builds a price premium that causes silver markets to go berserk.

Coming increased demand for physical silver bullion can and likely will deliver away much of this latest COMEX silver pile of over +300 million ounces, much like what occurred before this 21st Century Bullion Bull market began in earnest.

Not to sound glib. But just knowing roughly how much silver there is, lets one see how silver is now a dwarfed speck of dust in the fiat derivative laden financialized markets.

It takes very little physical silver bullion interest in the aggregate for the silver market to outperform all other asset classes in brief and bright stretches.

Manufacturers who have to have silver bullion so their products work, they will likely be the ones seeing to the next major COMEX silver bullion drain.

Most likely they will be doing so at markedly higher prices than today. Get your silver bullion position now before the real crowds start rushing in.