Gold Surges To All-Time Highs Ahead Of Fiscal & Monetary Events

Gold has surged to new all-time highs, and silver is consolidating, at twenty-five bucks!

Gold has basically launched off of $1800, and the yellow metal hasn't looked back: 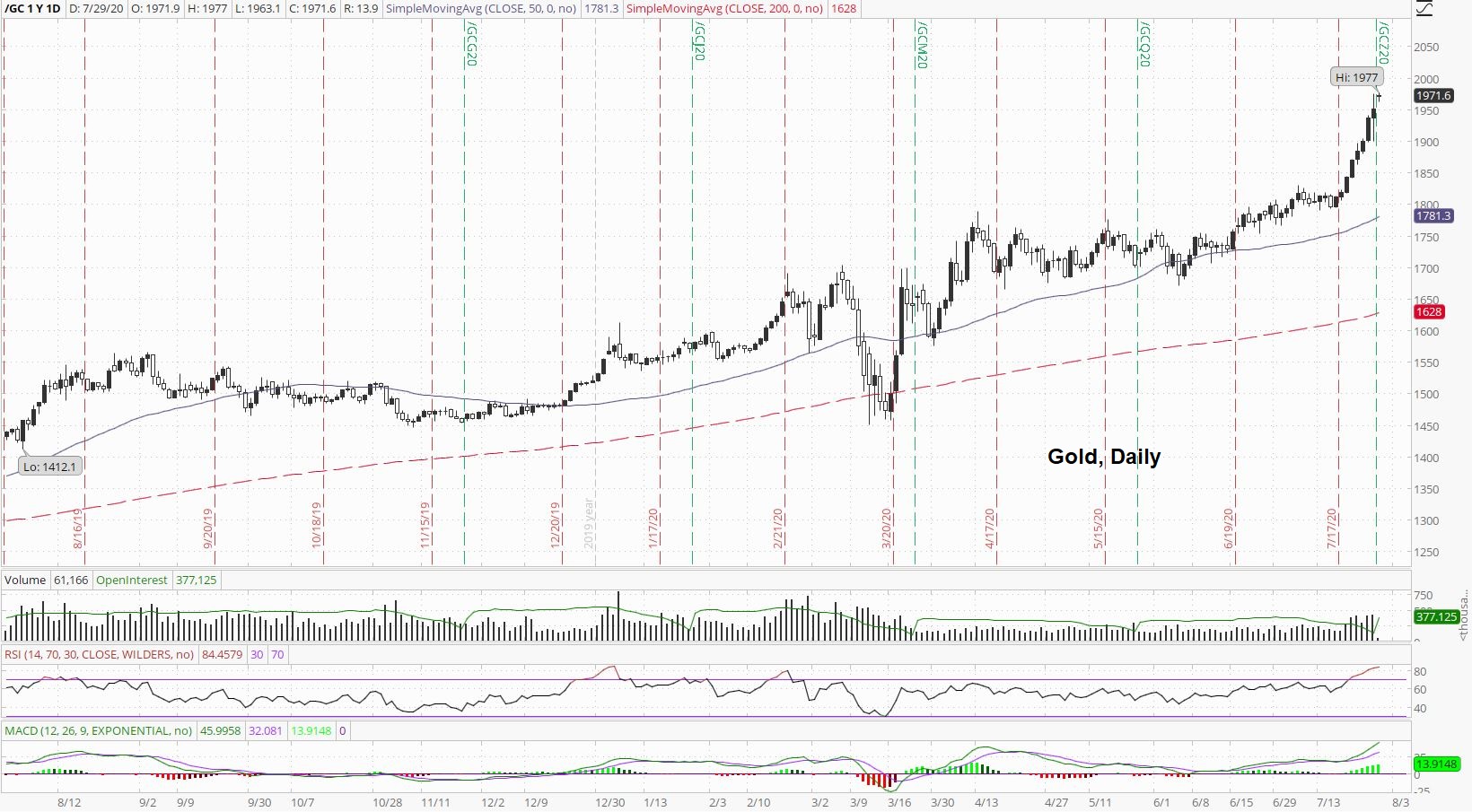 Many technical analysts are concerned that the market is currently overbought, and others say $2,000 will be staunch resistance, however.

Gold has been performing spectacular, and silver's really been on fire: 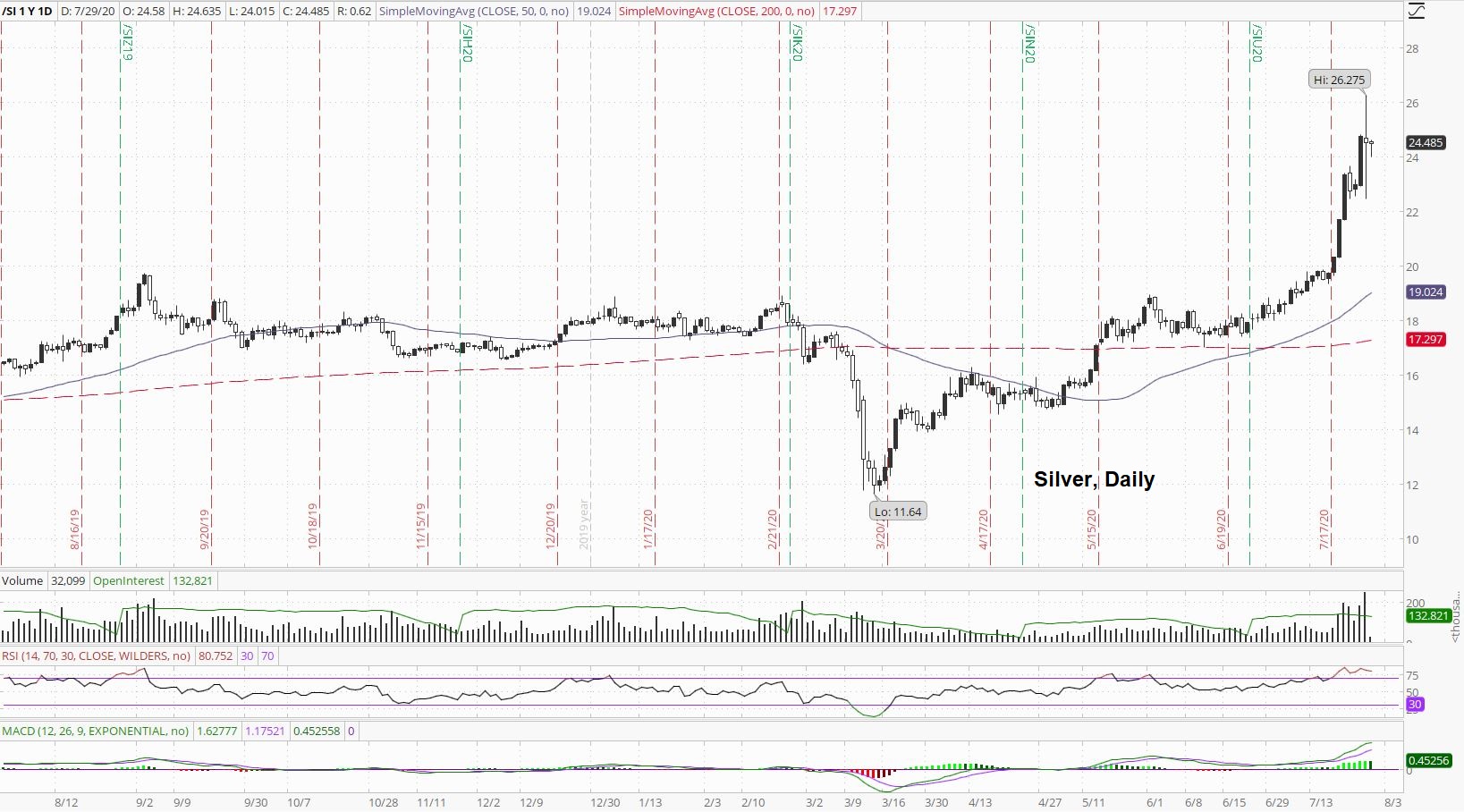 A couple of days of pause here and there is all of the pullbacks that silver's really had lately.

As such, at this point in the cycle, the Gold-to-Silver Ratio is practically ready to say goodbye to the 80-handle: 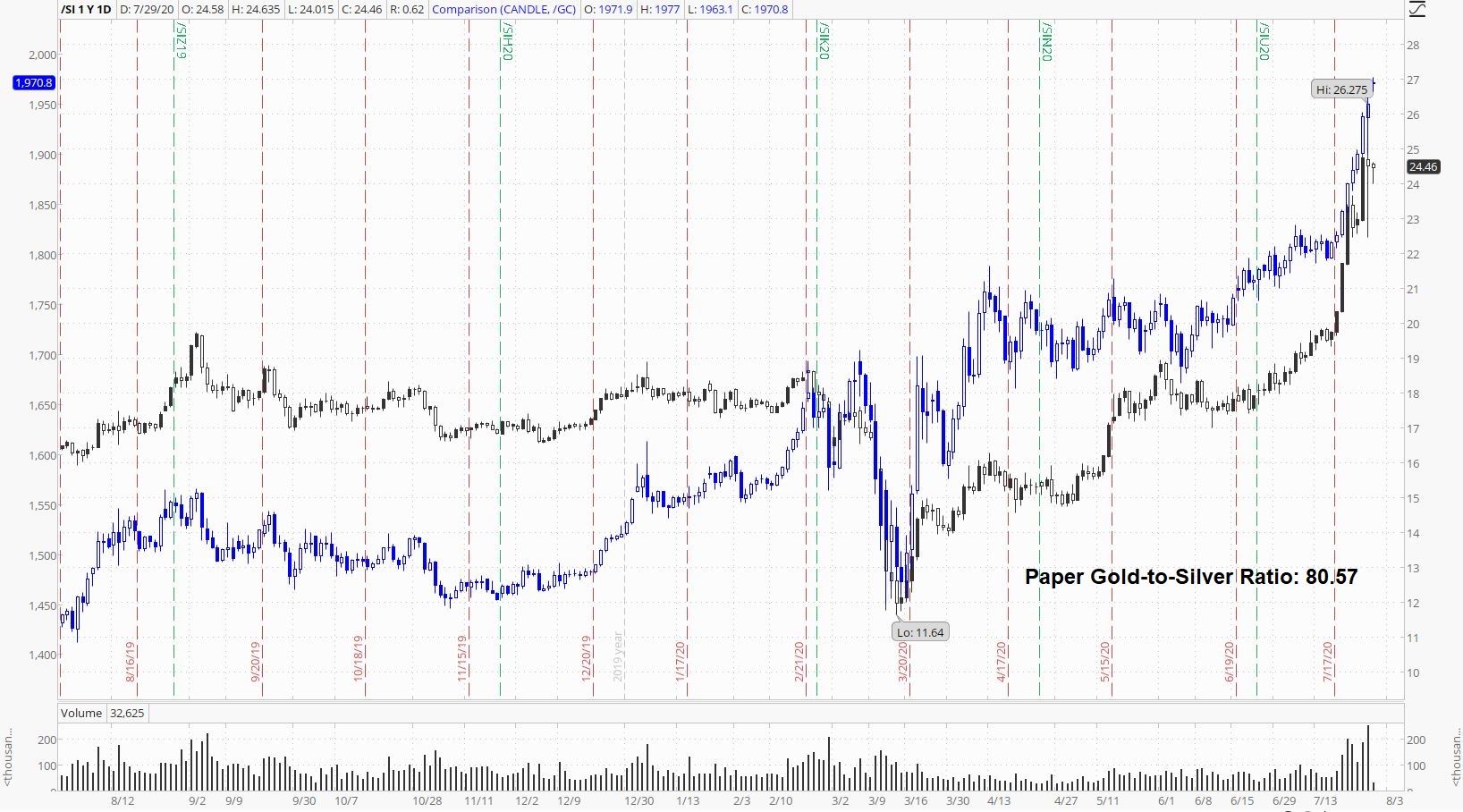 For investors, the ratio is coming down for the bullish reason of rising prices, with silver outperforming gold to the upside.

Why have Gold & Silver continued to surge this week?

Said differently, there are many things happening in the world that are driving investors into real, physical gold & silver, none the least of which are two fundamentals factors on full display this week: Fiscal and Monetary Policies.

On the fiscal side of things, we have Main Street, USA that is in the middle of what is arguably an economic collapse.

Tomorrow (Thursday, July 30) will be the BEA's release of 2nd quarter GDP, that is, the US Federal government's measure for economic growth during the months of April, May, and June.

Needless to say, going off of the Atlanta Fed's GDPNow estimate, we're looking at a deeply negative number: 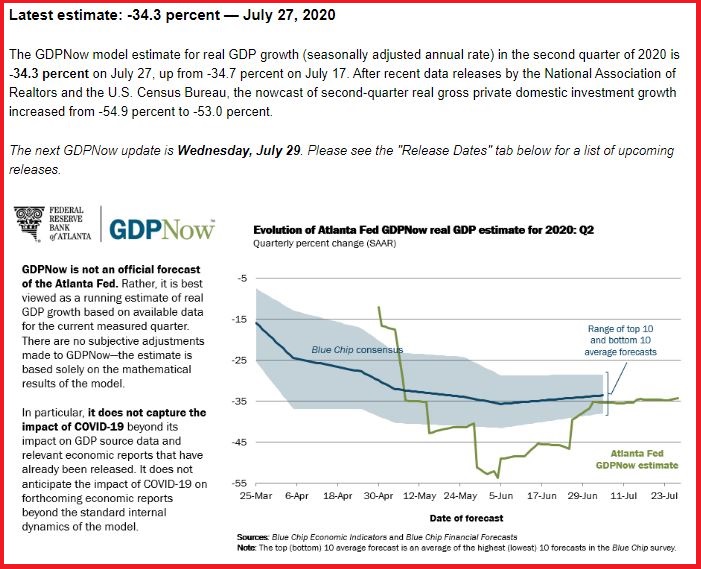 In fact, whereas GDP is normally economic "growth", what we have right now is a severe economic contraction, and the Atlanta Fed is estimating that contraction will be nearly 35%.

Why is such a severe economic contraction bullish for gold & silver?

For many reasons, with the government response, fiscal policy is, being the key to the bullishness.

Specifically, with so many people out of work, and with so many businesses closed or operating on severely reduced sales, US Federal Government politicians are hashing out round four of the CARES Act to provide fiscal (i.e. government) stimulus to the economy.

Here's the thing: With people not working, they are not producing anything, so all of this stimulus, such as the direct deposits to taxpayers, along with the pandemic specific Federal unemployment benefits,  are not only all based on debt and deficit spending, but this stimulus is highly inflationary in nature.

But that one example on the fiscal side of things is only one of the bullish fundamentals.

Another bullish fundamental is the current monetary policy undertaken by the Fed.

Today, at 2:00 p.m. EST, the Fed will release its latest FOMC Statement, where the Fed discusses, among other things, employment, inflation expectations, and the Fed also declares its current interest rate policy.

In what should come as no surprise to anybody, well, this chart of interest rate probablility from the CME Group pretty much says it all: 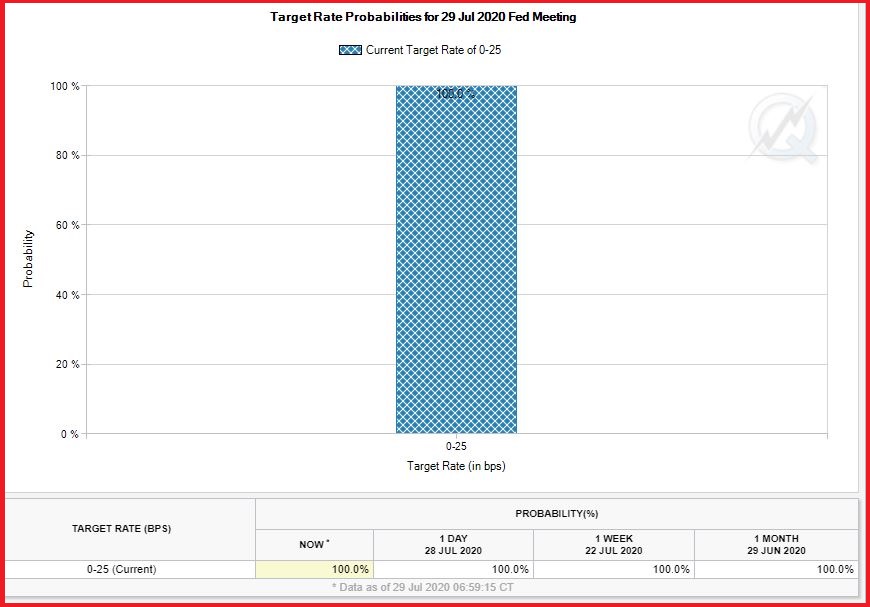 Zero percent interest rate policy (ZIRP) it will be!

Furthermore, in addition to the ultra-low interest rates, nominally speaking, or, taken at face value, the Fed is providing all kinds of financial programs to inject so-called liquidity into the markets to keep them operating according to the Fed's desired manner of operation.

Platinum could be considered a hedge against all of this too: 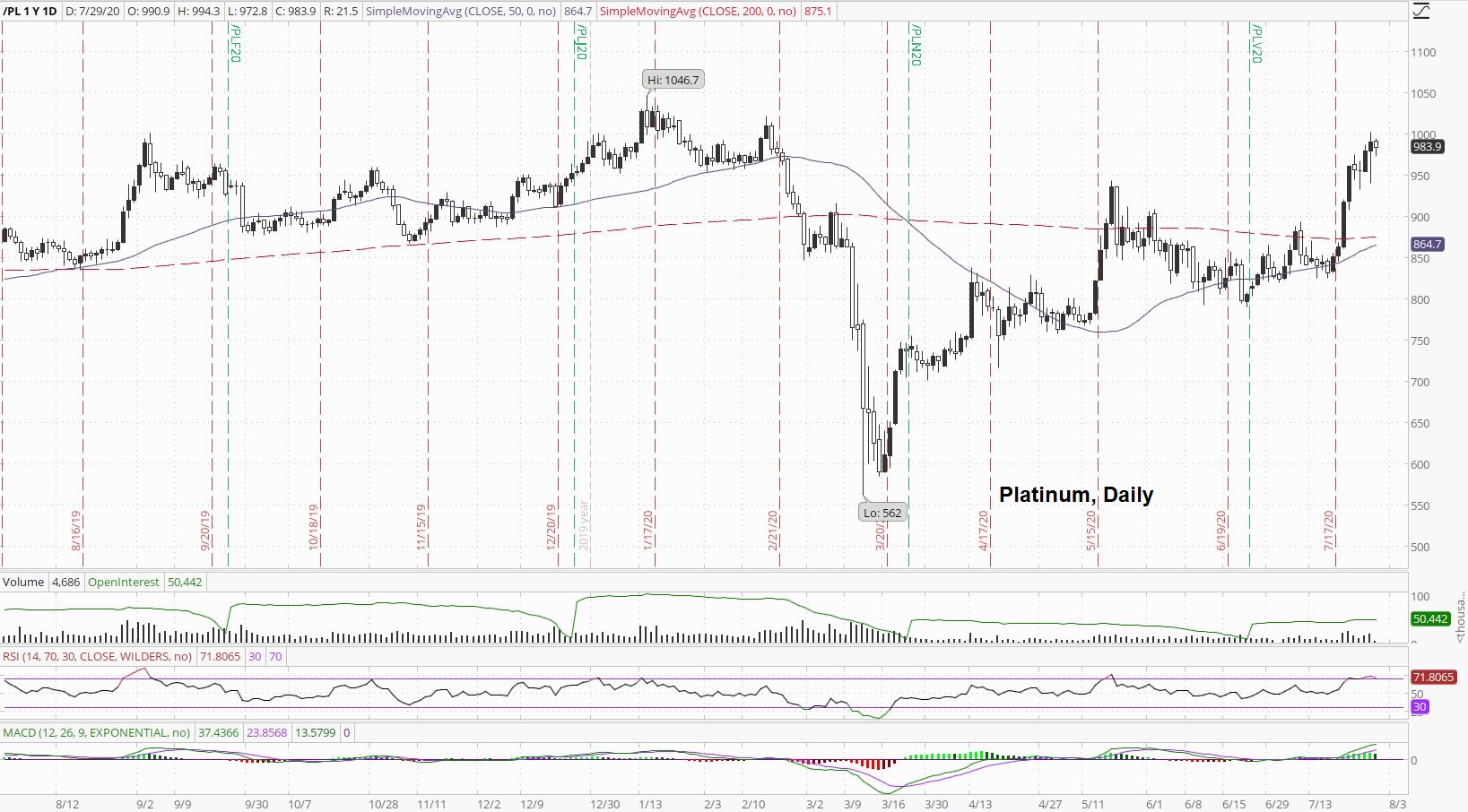 Platinum does, after all, meet all of the requirements to be money, real money, and platinum basically having clawed its way back to flat, year-to-date, platinum may be presenting itself as a great value investment for deeper-pocketed investors.

Palladium has taken off since last Wednesday: 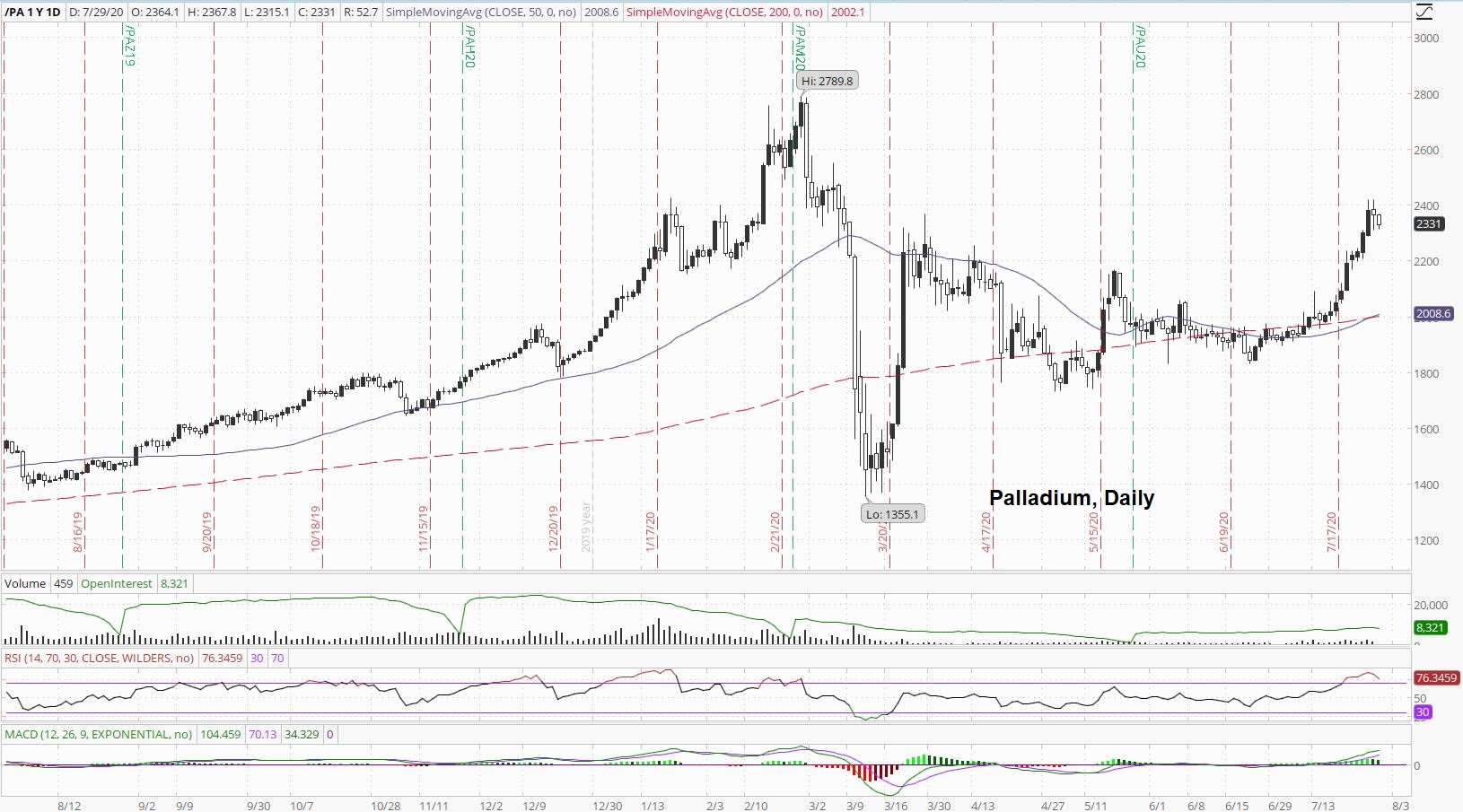 Palladium's pullback is more pronounced than that of gold & silver, but then again, palladium is not quite as sought after for the same reasons as the two original monetary metals, which are being invested in with ferocity.

Copper is now consolidating after such an epic wall of worry: 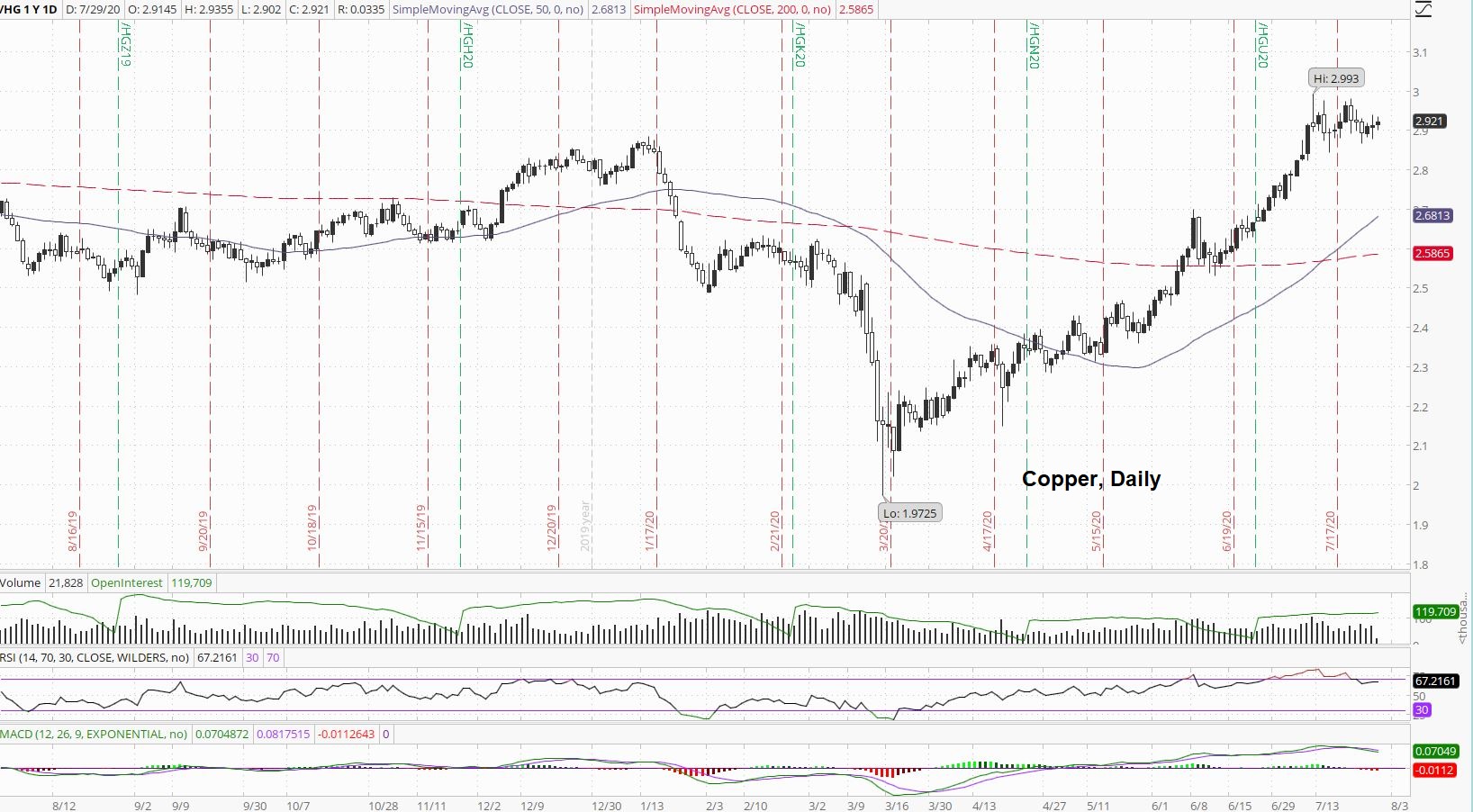 Copper may not be money, but to this day, copper is still an ingredient in currency, so whereas many people are assuming that copper will crash again if and when the stock market and/or crude oil crash again, in the near term, if copper is currency, and if it is also true that coins are in short supply in the United States, would it be too far of a stretch to say that copper is real-time proof of Gresham's Law in action?

Regardless, the price of crude oil is barely moving: 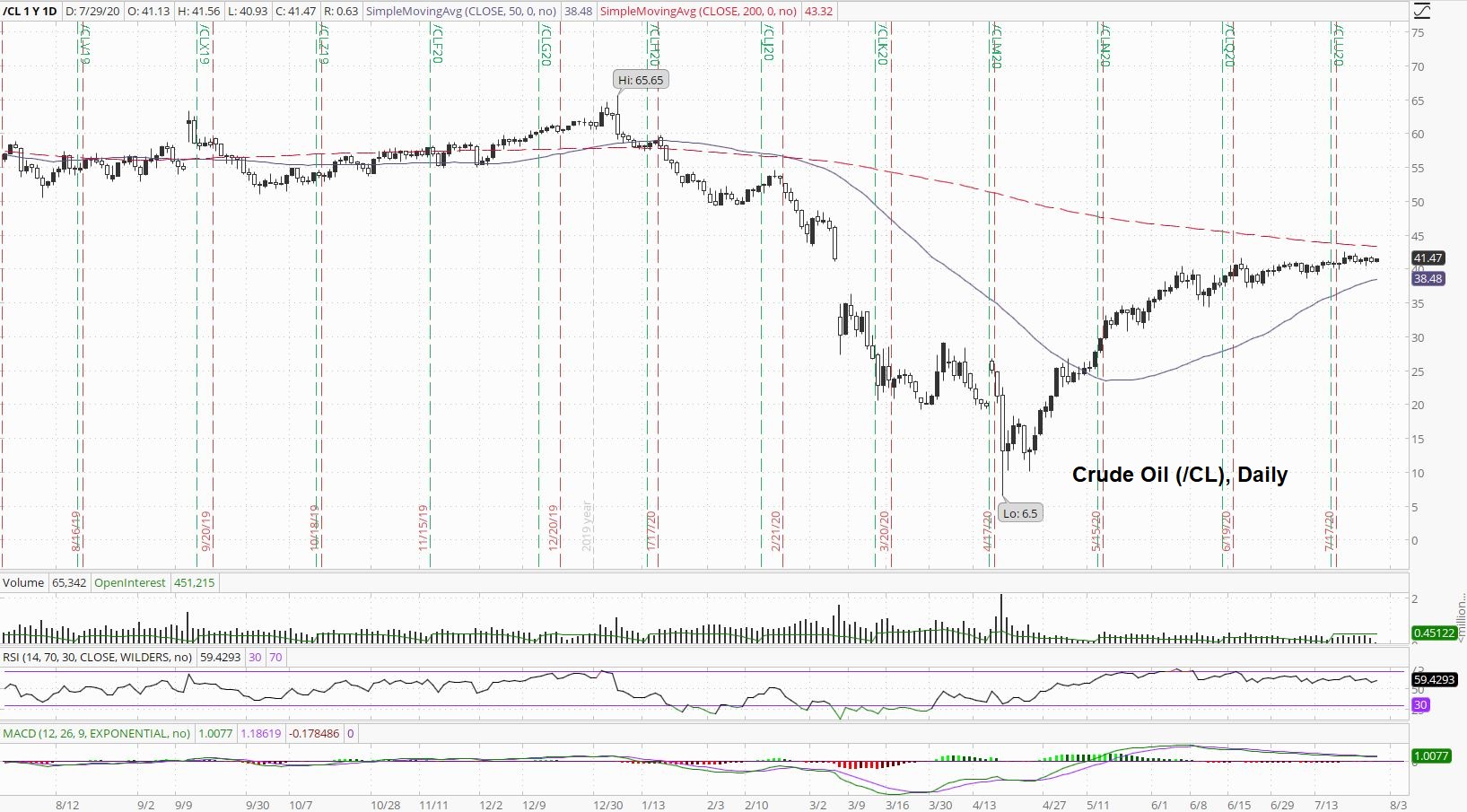 With price action that has become this tight, it sure seems like we're ripe for an explosive move to the upside or to the downside.

Speaking of explosive moves, since the stock market is so Fed-dependent right now, we could really see some fireworks this week if something from today's FOMC Statement (or Press Conference at 2:30 p.m. EST) doesn't sit well with market participants: 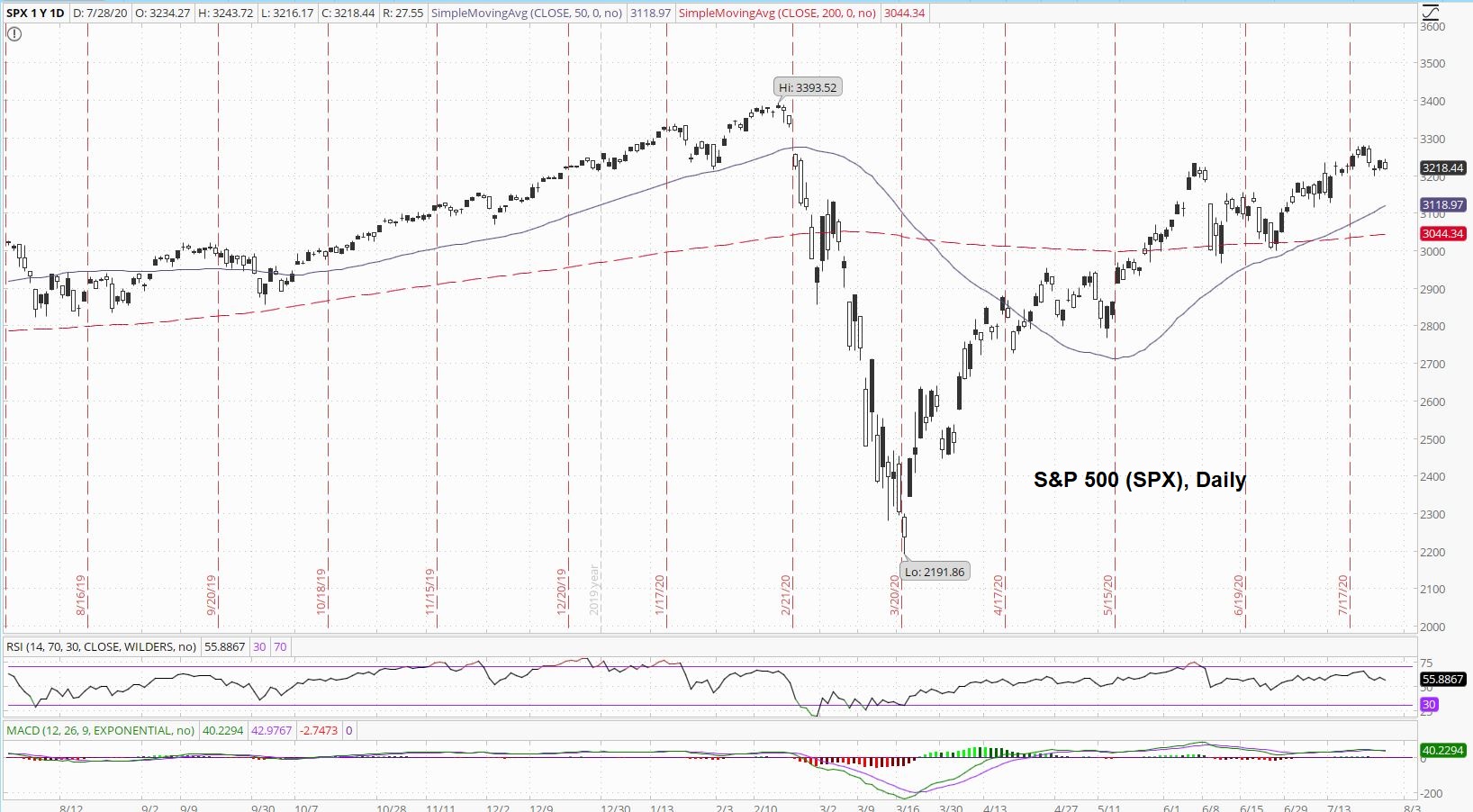 A lot of technicians are watching that double-top closely, and there is no doubt the fate of the stock market seems to be hanging by a thread right now, so we can be assured that every word from the Fed, written or spoken, will be scrutinized with a fine-tooth comb.

For now, however, stock market participants assume the Fed has their backs: 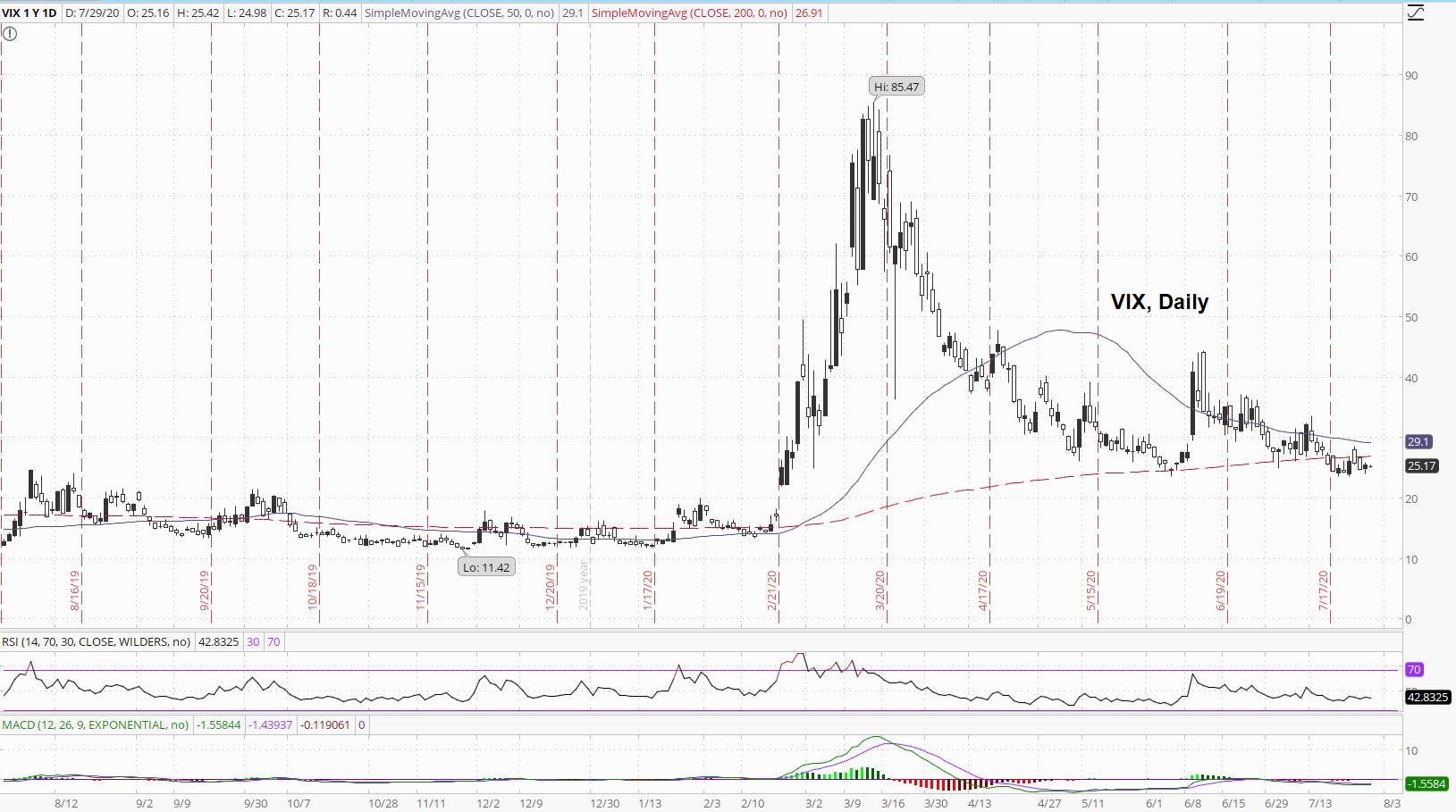 Even if that's possible in theory, is it also possible that the law of diminishing returns kicks in, and at one point, no matter what the Fed does, the Fed simply can't prop-up the markets? 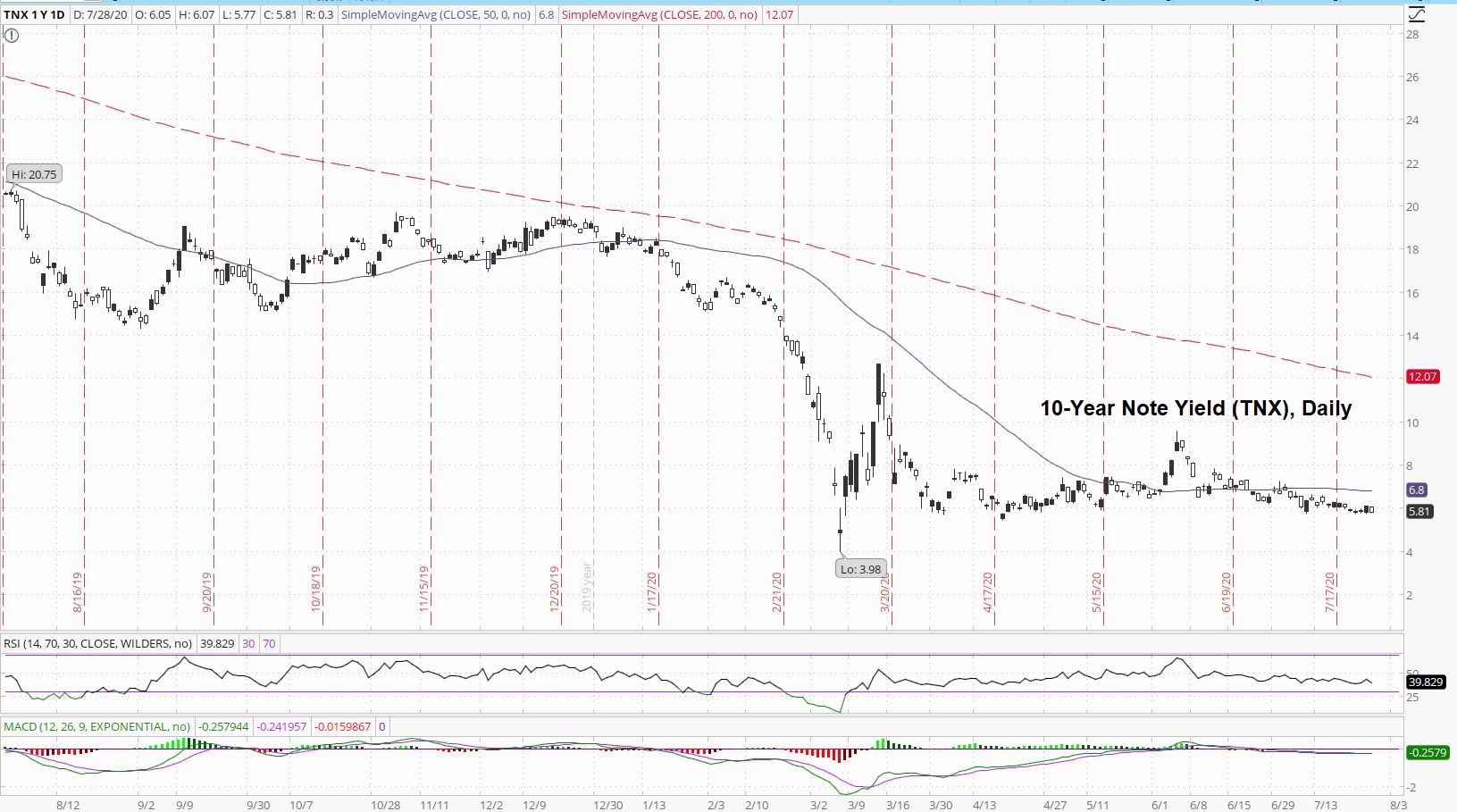 With the Fed being the buyer of first resort, and with market participants front-running the fed, the pressure will continue to be to the downside on yield.

The downside on the US Dollar index, however, will be rather painful for holders and users of US dollars: 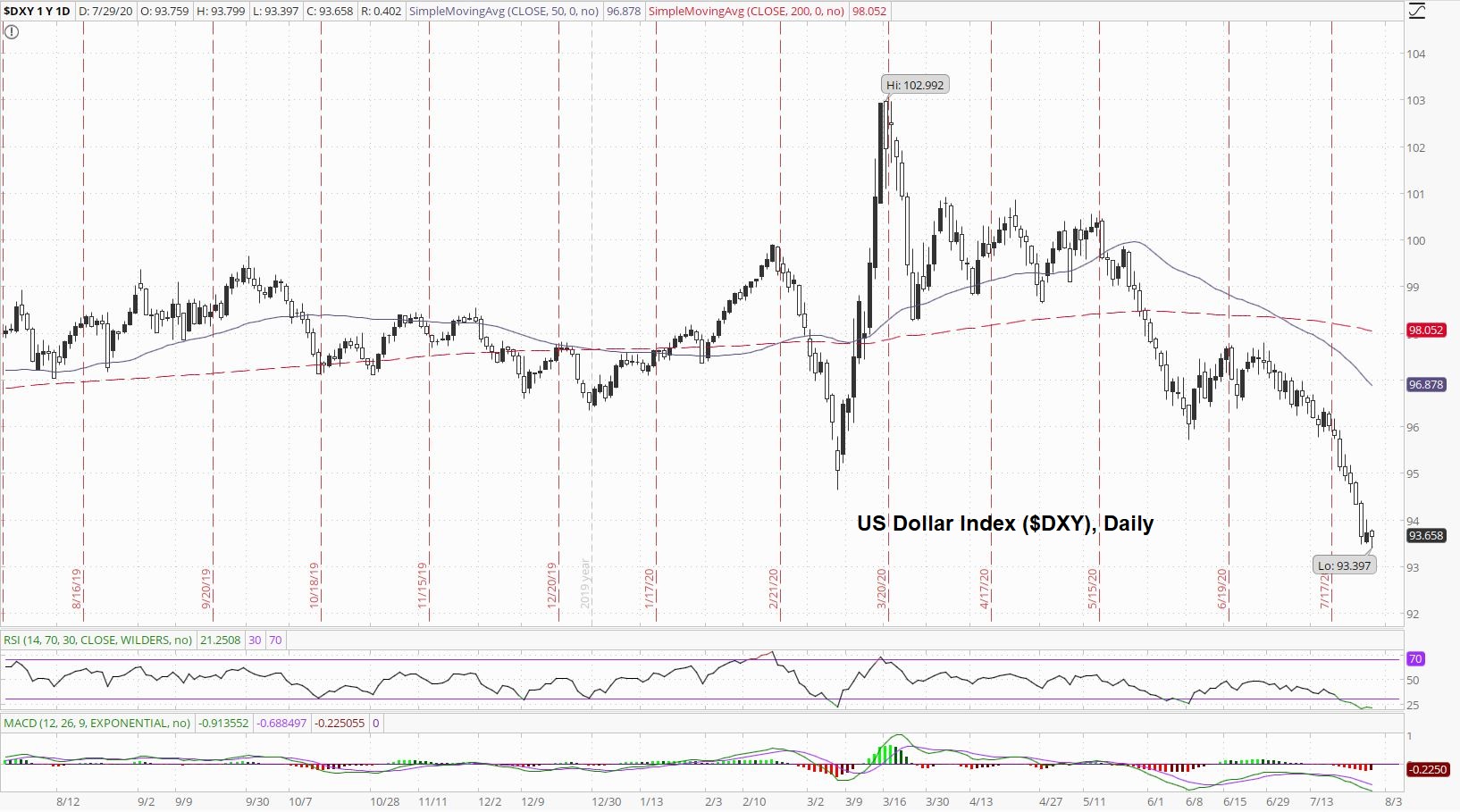 And even if the US Dollar index bounces here, or possibly even strengthens as some sort of 'flight to safety' bid if, for example, the US stock market begins plunging, it's still as the race to the bottom in a world where every government currency is of the unbacked, debt-based fiat variety.