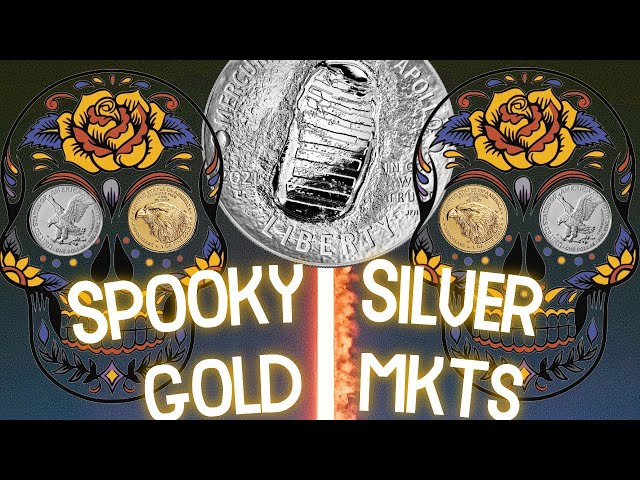 Are NFTs Worthless? This $530 Million Non-Fungible Token Shows They Could Be

As we await the eventual manic moon phase for our prudent bullion, high tech precious, and monetary metals bets to pay off handsomely in escalating real value terms.

Quick update on how poised silver is at the moment, with pile-on momentum COMEX longs likely to use WallStreetSilver as cover for the manic mania ahead.

The COMEX bully longs are momentum pile on coming, just precisely when and what sets that off still unknown. All the conditions are there though for a manic rise to begin building thoughhttps://t.co/iBqOU8fExg

Let’s start this week’s video by having a bit of fun clowning on this week's ghoulish and frightening moments that I came across. Hope you have as much fun watching this as I will have in making it.

First off, how do you like my Jack'oLantern NFT in the video embedded above?

I'm thinking about putting it online for the price of let's say... $530 million fiat Fed Notes. Now, give me one minute, and walla it sold... to myself in a tape painting wash trade.

Now if that sounds strange or fraudulent, well it is.

That is precisely what is reported to have happened this week in the digital Non-Fungible Token or NFT digital art world.

Apparently, this cyberpunk owner bought his own nonsense, to give off the illusion that anyone in the world would be so delusional as to pay any semblance of purchasing power for this thing.

The reporter of this article described the stunt as an "elaborate publicity stunt."

Whereas I would describe it more so as a wash trade and paint tape designed to give off the illusion that NFTs like this have any value whatsoever.

The issue here is how blasé and indifferent people are acting towards this unregulated Wild West market. Literally, change a pixel on your favorite NFT, then copy and paste as many as you want.

This doesn't matter for Reuters reporters though. They report that people are supposedly getting fabulously rich citing (ahem, many wash trading) bloated NFT sales figures. They fail to mention that only a small handful of insiders are getting wealthy tricking delusional marks who are transferring their wealth for most items of near next to no value.

Janet Yellen had a fun quote today... saying something akin to that we can spend spend spend, and extra likely mal-investments won't raise price inflation of goods, services, and overpriced bubble asset classes.

Facebook's Mark Zuckerburg introduced Meta with a creepy video illustrating how cool living in an artificial reality could be. And I'm not going to make your skin crawl by showing you how terrible the disingenuous advertisement was. Rather I am just showing you how cool his Halloween costume is gonna be.

More serious subject, we have not yet tackled on this channel the fact that the IRS is soon to have a backend to all US bank accounts so they can track purchases above $600 fiat fed notes while Yellen and her cronies spend massive trillions on their pet projects. But here is some gallows humor on the freak show they are creating.

Oh, and Janet Yellen had more to say while the Tic Tok Island Boys scare us with their cool teeth, tats, and hairdos.

The first chart gives off the impression that inflation is going away when we have around $200 trillion in debt and unfunded liabilities to debase this decade into the next without technically illegally defaulting. Not gonna happen, bigger inflation is ahead.

Next chart, some spooky unnamed analyst at UBS said real yield expectations are going up. I'll take the opposite of that trade long term.

Chart 3 shows the momentum of unsecured derivative bets mostly leaving $SLV after silver fell back from the Q1 Silver Squeeze kickoff. Remember, as Goldman Sachs' own head of commodities Jeff Curry stated at the start of this year in 2021, many of the largest shorts in the silver market are the ETFs. All retail and most institutional investors who buy unsecured derivatives like $SLV, $GLD, $IAU, and $SIVR have no ownership or title to any supposed silver bullion, further underperformance versus bullion to come.

This outflow means very little as London has already admitted publicly that in early 2021 they almost ran out of silver bullion within their opaque silver slush fund system.

The final of these supposed spooky silver charts give the insinuation that silver won't bounce from this support. Again I'll take the remainder of this trade well beyond the suppressed nominal record high of fifty as triple digits are my longer-term target for silver bullion.

And so that silliness is out of the way. Let's get an intro and then down to business.

The silver spot price and gold spot price markets were mostly up for the week but had a typical end-of-the-month sell-off for the shorts to keep appearances less bullish.

The gold-silver ratio still hovers at 74.

Ireland added a half metric tonne or just over 16,000 thousand ounces of gold to their reserves which is not much if taken merely on its face, but it signals something that may be building in the EU.

They are the first government and central bank to have added to their Gold Bullion Reserves since signing the 1999 Central bank Gold Agreement with 10 other nations and the European Union agreeing that gold is bedrock money in global monetary reserves and that they would not sell off more than 400 metric tonnes per year at the time. Since 2008 gov't central banks have been net buyers of gold bullion and that trend is not changing anytime soon.

For those keeping tally on the aggregated net positive gold bullion buying by governments thus far in 2021, here is where we are.

There was a rumor based on a website data input error that no gold reserve above holding Canada bought 100 metric tonnes but has since been denied by market sources. So be careful of misinformation and supposed experts you listen to.

The CME Group lowered the margin requirements required to go long or short COMEX silver futures derivative contracts this past week. That is often a bullish sign given that many longs are small-pocketed compared to the deeper-pocketed megabanks and large institutional players often on the short side. I am still waiting to see when the bully momentum longs that Paul Tudor Jones recently described on CNBC come inbound into these commodity markets to help set off silver's run beyond $30 an ounce, and running.

Comex registered and eligible piles keep falling, and the supposed kingpin of the silver market has had its silver pile rolling downhill now for some time now.

Today, precious metal trading customers received a message from Bank of https://t.co/dCGe5NHU6S said since October 31, the Bank sets the limite to the position of precious metal accounts.Customers can not buy beyond the position limit, but can sell existing positions. (1) pic.twitter.com/7YCrp6knBB

Now for context, I tell you in our intro every week, I have been in this bullion industry for over a dozen years now. And back in 2011, I literally helped set up segregated storage accounts for a client base in Asia based out of Brink's Hong Kong.

I spent nearly a week there, and I actually called the Bank of China's supposed bullion trading desk wanting to know how robust their silver bullion coin market was for walking in and buying off the street for instance. It was underwhelming, likely due to the extra tax added on silver bullion china, which is an additional 17% added to the spot and bullion premium.

In China and in Asia in general, there is a massive culture of owning physical gold and in India silver too, while also day trading derivatives in the silver and gold markets.

likely are short like hell on long $Au $Ag bets

Well, my hunch is the Chinese megabanks are short and not positioned for if and when the silver and gold prices start climbing walls. In other words, they are trying to get out of the massive losses they would have to take.

probably to deleverage the massively popular paper gold silver derivative mkts, the banks are likely staring at big losses if when gold silver go parabolic and then their unsecured paper trader base wants to take profit$

China bucket shops don't have the funds nor the bets long

The silver institute published a few insights today, first reminding everyone that the more digital we go, the more silver we are going to be needing for industrial inputs.

Secondly, there is also potential that gold, silver, and copper are going to also be involved in the keeping of hydrogen atom production safer and more stable in its final output. Platinum also has a massive next few decades if hydrogen becomes highly used in 18 wheelers and automobiles, especially in China and Asia.

Now to close out this week, we are going to visit the excellent charts of Tavi Costa who if you are on Twitter give him a follow, or check out his many interviews on this website as well.

Here we see a chart showing that precious metals vs commodities (mainly energies) are at their lowest level since 2008 and 2018. Precious metals have underperformed and disappointed so far this year but the snap back to come should be violent in my opinion.

More charts from Tavi next.

Here we see eight central banks blowing out their balance sheets to try and keep this fiat financialized system from imploding, not gonna work in my opinion, we're headed for the biggest financial crisis of all time. One which the very values of the underlying currency units get freaked out of increasingly.

Here we have the over 50-year silver spot price cup and handle. Once the $50 per troy ounce price gets broken through, the upside energy release should be one of rocket propulsion. The first step is to get through $30 sooner than later.

Next silver spot prices versus negative real rates, we have some making up to do.

Moving on now to the silver versus fiat M2 supply, again we see a coil and likely direction upward to account for all these reckless fiat currency creationism running amok.

Record US government debts will continue to grow but just look at much further we go if we just get back towards 2011 levels, if we added the year 1980 to this chart it would likely be three to four times the size of that 1985 bounce spike. We have a long way to run.

Gold bulls are likely tired of waiting on this post-August 2020 record price high consolidation, but the longer this stretches the longer and higher it all will go once we get into the mid, higher $2000s and beyond. Prudently, position and patience with next to no time decay dependence are required on gold bets.

With price inflation running higher and longer, certainly not transitory by any means of the definition of that word, here is a look at performances over times when the government's rigged CPI data said inflation was beyond 2% as in right now. Gold has not even begun to outperform. Data says other commodities and intelligent bets in select emerging markets may also be good ideas.

We wish you and yours a most excellent Halloween, Day of the Dead, and All Saint's Day.

And as always to you, take great care of yourself and those you love.