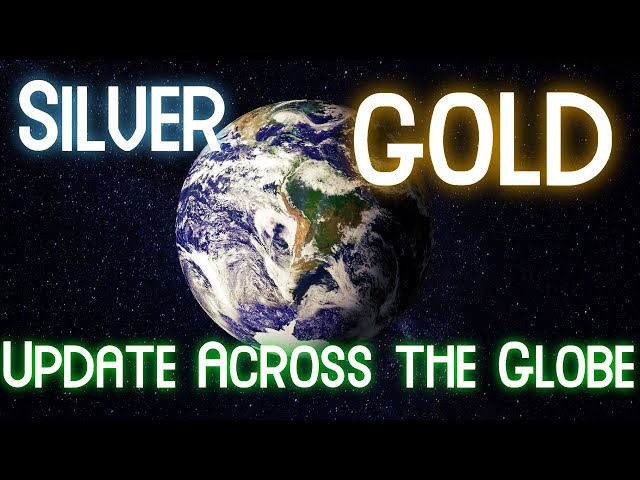 We will get deeper into some of the chicaneries later in this video.

The fact that silver has held up so strong of late says a lot about the tightening and panic under the surface.

The spot gold-silver ratio claims a mid-65 figure to close this week's trading.

But the physical bullion wholesale and retail reality is saying otherwise. To the tune of a Gold Eagle / Silver Eagle coin price ratios currently at just under 58.

We're going to now blast through 12 long-term full-fiat currency price charts for gold and silver to see where in the world we currently are.

Late last week, we briefly highlighted some of the nonsense that Goldman Sachs' head of global commodities research Jeff Currie spewed on CNBC February 4th in a video clip they uploaded on Youtube entitled, "Why it's impossible to short squeeze silver: Commodities expert.”

That full interview's link is in the following video's show notes on youtube. When I saw its 10 minute discussion for the first time, my mind reeled at just how many inaccuracies he stated in such a short time.

In last week's London Silver is Running Out video, we merely focused on the fact that Jeff Currie himself alleges that China, more or less, short squeezed the global crude oil markets in the 2007/2008 run toward $150 a barrel.

Here is more Jeff Currie from that interview courtesy of CNBC saying some other inaccuracies and then a bit about how supposedly the largest silver ETF $SLV is perhaps one of the significant COMEX silver shorts.

You might have to replay Currie's blabbermouth sections a few times to understand what he was implicating.

The idea that the BlackRock iShares SLV Trust is somehow directionally involved short on the COMEX is a new one. One would think they simply would buy silver bullion with their unsecured customer inflows and be done with it; no hedging required.

Then again, Goldman Sachs is an Authorized Participant of the Blackrock iShares SLV trust fund able to redeem the supposed silver bullion underlying the silver ETF. Perhaps Jeff said something he should not have in public.

Those were the two SD Bullion video updates on youtube this past week.

Oh, and to close, we have some breaking news!

Based on this global debt pile explosion alone, we should expect bullion values to benefit over time.

As the BIS’s former head researcher William White once quipped that, “some of these debts will not be serviced, and have to be written off, and maybe financial institutions recapitalized in the process.”

That which can't get paid in real value terms; won't.

That is all for now.

Thank you for coming by our SD Bullion blog.