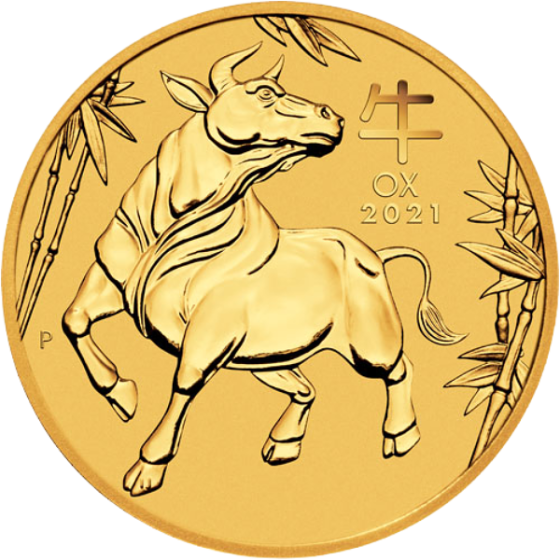 The reverse of each coin depicts a strapping ox among bamboo, a symbol of virtue. The logo consists of the inscription OX 2021, the Chinese character for 'ox', and the mintmark 'P' of The Perth Mint.

The Perth Mint makes several different gold coins, which all have unique designs. Most feature exotic animals, including the widely sought-after Gold Kangaroo. The Perth Mint was established in 1899 originally as a branch of the British Royal Mint. It wasn’t until 1970 that ownership of the mint was turned over to Western Australia’s government. Since then, the Perth Mint has been the source of many coin series popular among collectors and investors alike.

Every one of the Australian Gold Lunar Ox Coins will be shipped to you enclosed independent plastic capsules.

This one-ounce version of the 2021 Gold Lunar Ox Coin will have a strict limit of just 30,000 coins to be minted. With the Lunar Series continued popularity, it is not expected that these coins will stay in stock very long so pick up yours today very lowest premium over the gold spot price online from SD Bullion today!