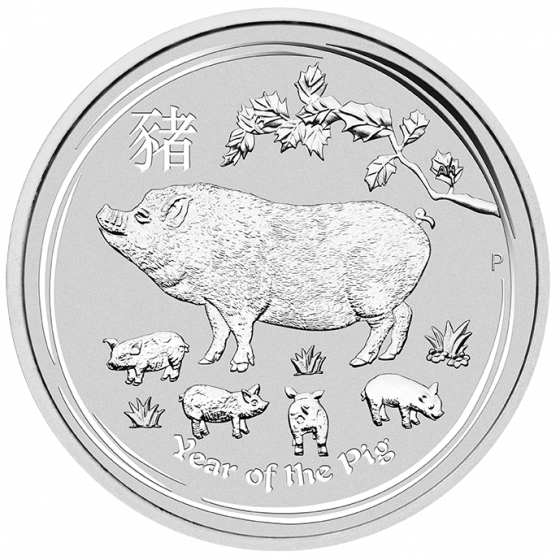 The penultimate fractional silver coin release in the Lunar Series II coin program from the Perth Mint, the 2019 1/2 oz Australian Lunar Year of the Pig Silver Coin, is now available at SD Bullion. These coins are ideal for collectors and investors who have been following the success of Perth Mint's long-running Lunar Series II.

According to the Chinese Lunar Calendar, 2019 is the Year of the Pig. Those born under this sign are said to be honest, loyal, sincere, and generous, in addition to having a calm temperament. Pigs are considered easy-going and composed, even in the face of danger and this sign is said to represent good fortune and wealth.

Each of these coins contains 1/2 troy ounces of 0.9999 fine silver. Moreover, every coin is considered legal tender in Australia with a face value of $0.50 (AUD).

Ian Rank-Broadley's portrayal of Her Majesty Queen Elizabeth II makes its customary appearance on the obverse sides. This design doesn't change with every annual release and is in line with all other legal tender coinage in the country.

On the other hand, the reverses bear the annually-changing designs that make every Lunar Series II releasse unique. This year, the adorable pig is featured on this side, celebrating the Chinese Year of the Pig -- 2019.

These 2019 1/2 oz Australian Lunar Year of the Pig Silver Coins are essential pieces of a long-running coin program from Perth Mint that has fascinated investors and collectors across the globe.