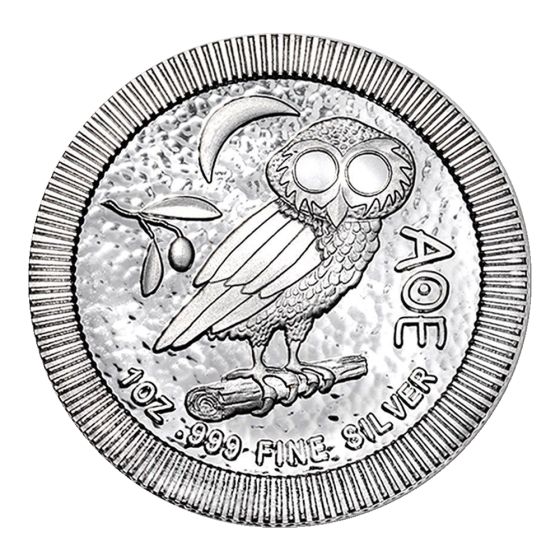 Another set of beautiful silver coins from the New Zealand Mint, these 2017 1 oz Niue Silver Athena Owl Coins are now available to purchase at SD Bullion. The minuscule island nation of Niue is gaining global recognition due to its growing portfolio of gold and silver coins, featuring the ‘Niue’ name.

These Silver Athena Owl coins are also stackable by design, with raised ridges around the edge of each one – making them easy to handle, transport, and store. Each of the coins, due to their acknowledgment as legal tender in New Zealand, bears a face value of $2 (NZD). Moreover, they are struck using 1 troy ounce of 0.999 pure silver.
The familiar side-profile portrayal of Her Majesty Queen Elizabeth II graces the obverse of this coin, as is common with all legal tender in Commonwealth countries such as New Zealand. Although Ian Rank-Broadley designed this portrait in 1998, it is still used on several Commonwealth coins.
On the other hand, the elegant Athenian Owl rendition on the coins’ reverses imparts the current Athena Owl Silver Coin name to them. In Greek mythology, this Owl accompanied the Goddess of Wisdom, Athena. Hence, the Owl’s close association with the Goddess has made the majestic bird a universal symbol of wisdom and knowledge.
Not only do these silver coins contain 0.999 pure silver, but they also feature elegant designs, making them collectible, investible, and displayable products at the same time. Since they are easy to stack due to their raised outer ridges, storing a stack of these coins will be a cinch.