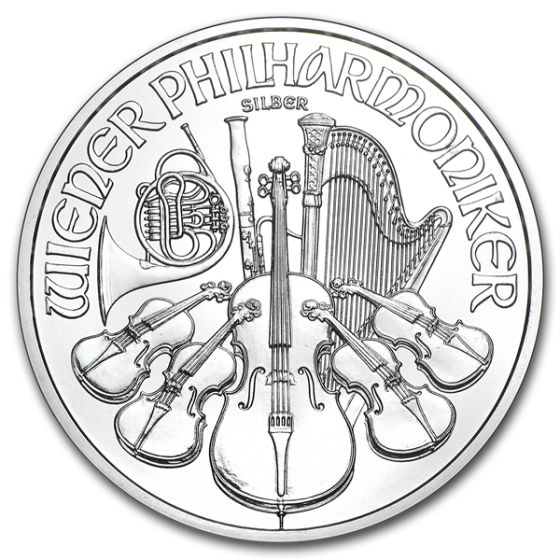 The Philharmonic series of coins was introduced in 1989 by the Austrian Mint, known all over the world for its quality. The series began with only gold coins, later adding a silver coin release in 2008. This 2017 issue of the 1 Troy Ounce Austrian Silver Philharmonic Coin, like the previous coins, is made from fine silver with a .999 purity level.

With a face value of 1.50 Euro, this coin, like the gold variant, also features an aura of elegant craftsmanship. Moreover, these silver coins are among the top selling precious metals products in the world.

Known all over the world for manufacturing the finest of coins and bars, the Austrian Mint was the only mint present in the Republic of Austria and was established in 1919. In addition to commemorative and bullion coins, the Mint produces circulation coins and blanks for many other countries.

The obverse side of this coin showcases an exquisite set of musical instruments with the cello in the middle, a set of violins on either side, a harp on the right and a bassoon and the Vienna horn featured on the left. Above the set of instruments, the words 'Wiener Philharmoniker' and 'Silber' are inscribed.

On the other hand, the reverse face of the coin features the image of the Great Pipe Organ of the Vienna Musikverein Golden Hall. Also inscribed are the weight of the coin, year of the issue along with the face value and the words 'Republik Osterreich.'

Since these silver coins are eligible for use in precious metals IRAs, they make an excellent avenue for investment. Moreover, since the Philharmonic collection of coins is highly sought after by collectors, this 2017 release remains an essential purchase for anyone who wants to keep their collections up to date.