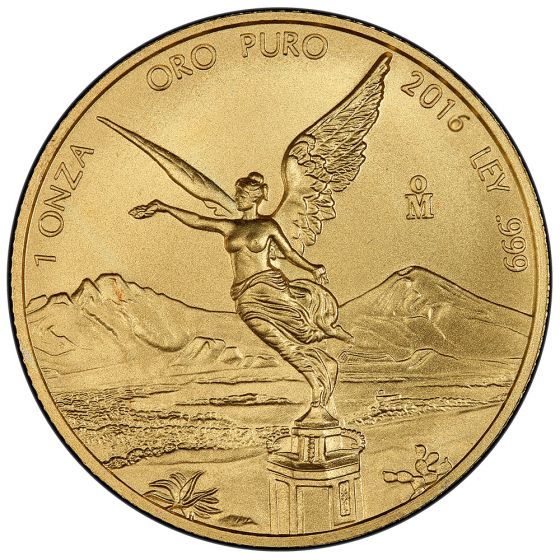 Each of these 2016 Mexican Libertad Gold Coins contains 1 troy ounce of 0.999 pure gold. Even though the Mexican Mint strikes them, these gold coins do not bear a face value – similar to previous releases. Moreover, every one of these coins is in BU (Brilliant Uncirculated) condition.

Available in both gold and silver variants, the coins struck under the Mexican Libertad coin program are considered among the most desirable coins in the world. Struck by the Mexican Mint, every Mexican Gold Libertad Coin portrays the distinct quality and finish that makes the mint’s products extremely desirable and interesting.

The Mexican Mint, or the La Casa de Moneda de México, is the national mint of Mexico. In fact, this mint is the oldest mint in the American continent. The Spanish viceroy at the time, Antonio de Mendoza facilitated the creation of the mint by a decree from the Spanish Crown. Its rich history makes it one of the most popular mints in the world.

Obverses of the 2016 Mexican Libertad Gold Coins highlight the image of Winged Victory. Furthermore, the famous Mexican volcanoes, Popocatépetl and Iztaccíhuatl, can be seen in the background. These images are iconic Mexican symbols. While the volcanoes represent the rich history and geography of the country, Winged Victory is a symbol of freedom and liberty.

On the other hand, reverses of these coins feature the Mexican coat of arms. In addition to this, portrayals of 10 coats of arms used throughout history (since 1821) surround the present one.

Fashioned from 0.999 fine gold, these 2016 Mexican Libertad Gold Coins will make a popular investment choice. They make perfect additions to investment portfolios to hedge against inflation. Moreover, the Mexican Libertad series is a popular coin program, with collectors and investors awaiting each annual release anxiously.