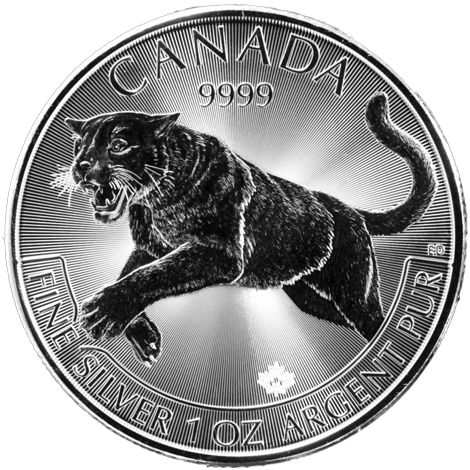 The Royal Canadian Mint 1 oz Silver Cougar is the first release in the RCM's new Predator Series Collection, released at the 2016 World Money Fair in Berlin.

Found in remote areas from southern Canada to Patagonia, the elusive Puma concolor enjoys the greatest range of any large wild animal in the entire Western hemisphere.
This massive leopard sized cat stalks the wilderness from the coast to the Rockies.

The cougar is one of Canada’s most powerful, elusive, and beautiful predators, and is depicted on this stunning new bullion coin leaping in attack on its prey.

A stunning new semi-numismatic release from the Royal Canadian Mint, the first coin in the Predator Series is likely to become a highly sought after collectible, as the first release in the Wildlife Series (The Wolf) carries a premium several multiples of the silver price today.

Specifications:
1 troy oz .9999 fine silver
38 mm
Limited Mintage: 1,000,000 coins
This coin is silver it is not colorized black on any part of the coin. If any area on the coin appears black in the image, it is a reflection.