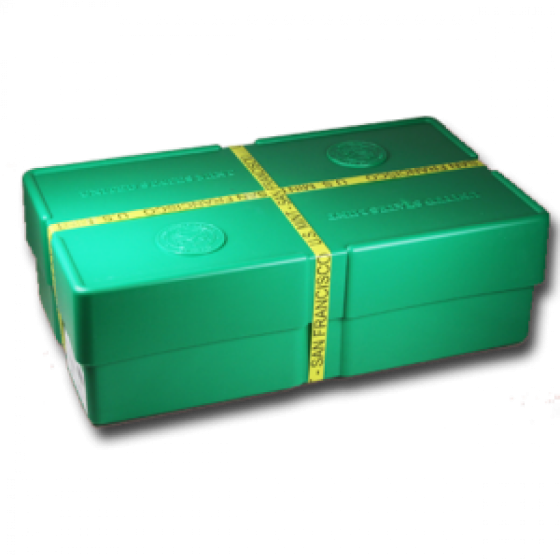 The San Francisco Mint stopped production of Silver Eagles in 1992, resumed 2011-2014 and has once again ceased production on Silver American Eagles.

They are widely considered the premium US Mint for artisan coins and striking design.

In 1986 the United States Mint began striking the modern American Silver Eagle coin. The coin's obverse design is patterned after Adolph A. Weinman's (1870-1952) design of the Walking Liberty Half Dollar, used between 1916-1947. The reverse depicts the classic bald eagle- America's classic symbol for liberty and freedom.

The American Silver Eagle is the only official investment grade US coin by the US Mint, and contains one troy ounce of .999 pure silver. They have a face value of one US dollar.

As an official US Mint product, Silver Eagles are eligible for IRA accounts, making them perfectly suited for your retirement account.

Individual coins are NOT struck with an "S" mint mark by the US Mint.

Secure One of Last Monster Boxes of American Silver Eagles Produced by the San Francisco Mint Today at SDBullion!

*Unfortunately we are only able to ship Sealed Monster Boxes to the Continental US, and unable to ship boxes to PO Boxes*
Details
Shipping & FAQs