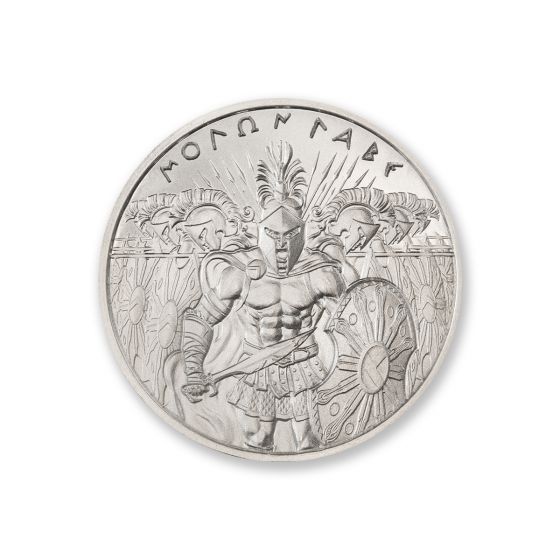 The 1 oz Molon Labe Type II Silver Round was inspired by the famous battle of Thermopylae and hence, features a stunning depiction of Spartan soldiers in combat. At the Battle of Thermopylae, the Spartans, led by their King Leonidas, fought against the Persian Empire ruled by Emperor Xerxes.

Once King Leonidas learned that his force was outnumbered, he sent back a bulk of his army and guarded the narrow pass against the Persians himself with just 300 Spartans. Although they eventually succumbed to the sheer number of the Persian forces, the Spartans became legends and became the rallying point for the rest of Greece to fight against the Persian invasion.

Each of these silver rounds contains 1 troy ounce of 0.999 pure silver. They're struck by Intaglio Mint, a privately-owned premier minting institution based in the United States.

Available in a distinctive Type II design, these silver rounds have a detailed image of Spartan soldiers on its obverse, lined up in a defensive position in full battle attire. We can also see the clear rendition of King Leonidas, shield in one hand and a sword in the other, his fierce look completed with a headgear, ready to strike down his foes. "MOLON LABE," which means "come and take it" were the words of defiance uttered by the Spartan King when asked to surrender.

On the other hand, the reverse sides feature the Intaglio Mint logo -- a Romanesque pillar in the shape of "I" on a textured background with the purity and weight of the coin imprinted around the edges.

Grab these 1 oz Molon Labe Type II Silver Rounds from SD Bullion and add pure silver to your precious metals portfolio while adding images that celebrate a legendary last stand by fierce warriors -- just 300 skilled fighters who stopped an army of 10,000 in their tracks for seven days.