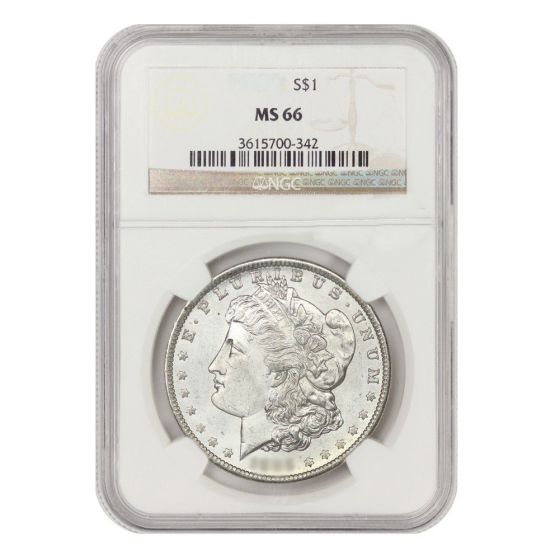 Struck by the United States Mint between 1878 and 1904, before briefly returning for a year in 1921, these Random Year NGC MS-66 Morgan Silver Dollars are nothing short of a piece of US history. Dubbed the 'Morgan Dollar' after its designer, the US Mint Assistant Engraver at the time George T. Morgan, these coins were the first standard silver dollars minted after the passing of the Coinage Act of 1873.

Not only are these coins certified to be authentic Morgan Dollars by the Numismatic Guaranty Corporation (NGC), but these coins are also graded MS-66. Considering the age of these coins (over a century old), this is quite a remarkable grade indeed.

Each of these coins contains 0.7734 troy ounces of silver.

While the obverses feature a left-facing portrayal of Lady Liberty, the reverse sides of the coins bear the image of a Bald Eagle with wings spread as it clutches an olive branch and arrows in its talons. Safely housed in an NGC plastic slab along with an NGC label, these coins are safe from harm and ready to go on your display case.

Grab these Random Year graded NGC MS-66 Morgan Silver Dollars from SD Bullion to ensure that you own an important piece of American history. Enrich your silver coin collection with these century-old American coins and diversify your precious metals assets at the same time.