Last Wednesday, the price of silver had a closing price of approximately $15.75, and this morning, in the pre-opening bell hours, silver is poking its head above $18.

What has happened over the course of the week that's giving us an impressive move in the price of silver?

It comes down to many factors, and here are two that are noteworthy: The increased uncertainty regarding the markets and the economy, and the ongoing US Treasury Secretary Steve Mnuchin & Fed Chair Jerome Powell reassurances to the public and to Congress. 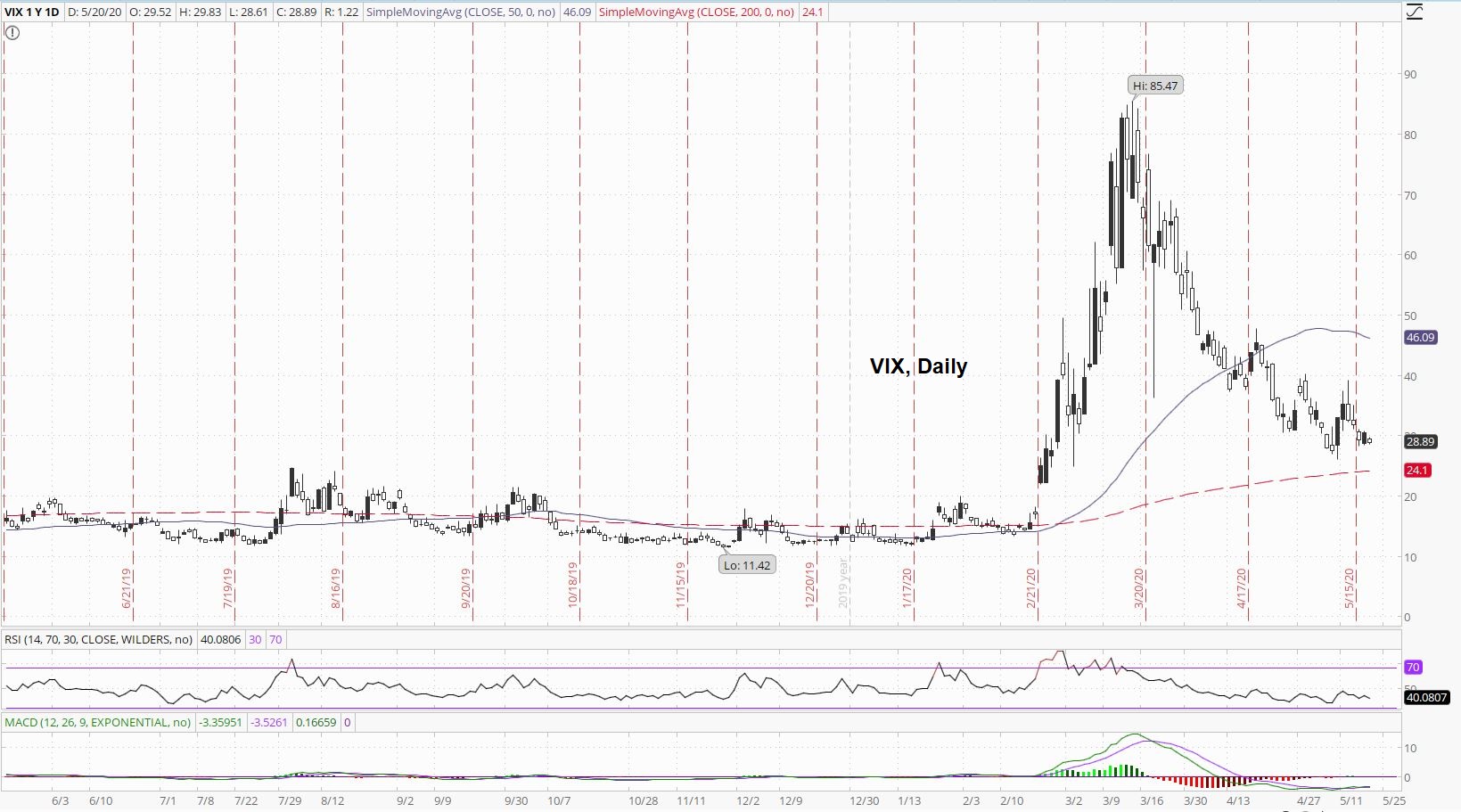 If the stock market cracks, however, and the ferocious rally turns into another crash in the stock market, we could see the relentless decline in the VIX not only abruptly halted, but followed by massive spikes again.

The VIX may not be expressing the increased uncertainty for a specific reason: The increasing uncertainty is in the fundamentals, not in the technicals.

For example, it is generally accepted that on Monday, traders and investors were optimistic about the data in a phase-1 trial for a Covid-19 vaccine, and the stock market rallied 1,000 points that day, in part because of that optimism.

By Tuesday afternoon, however, that optimism seems to have turned into uncertainty as traders and investors possibly began to realize their optimism might have been a little too overdone, and as such, the Dow dropped nearly 400 points in the last hour of trading alone: 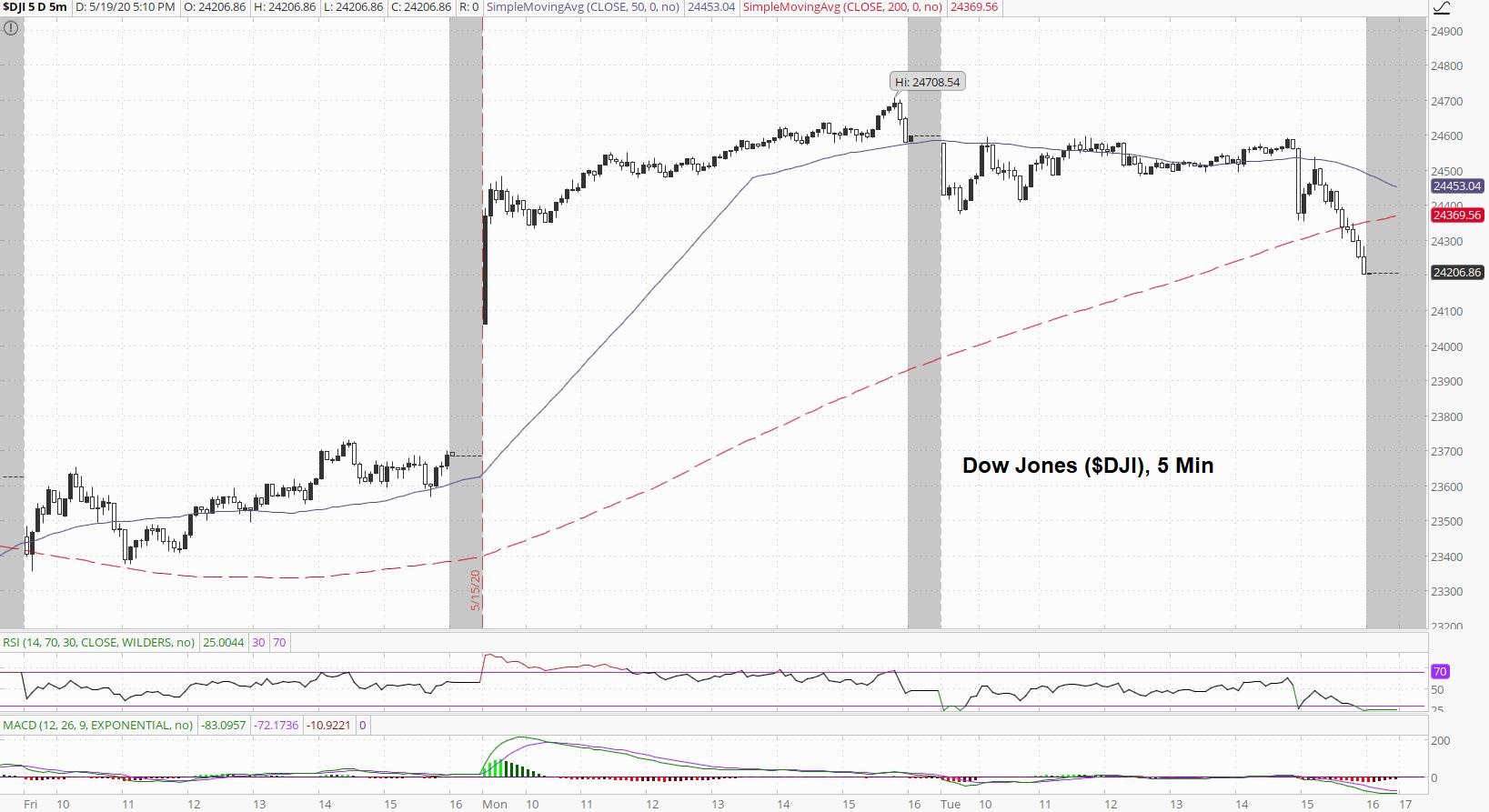 We'll have to see how the rest of the week pans out going into a holiday week (Memorial Day).

Regardless, Monday's high wasn't a higher-high to the one on April 28th: 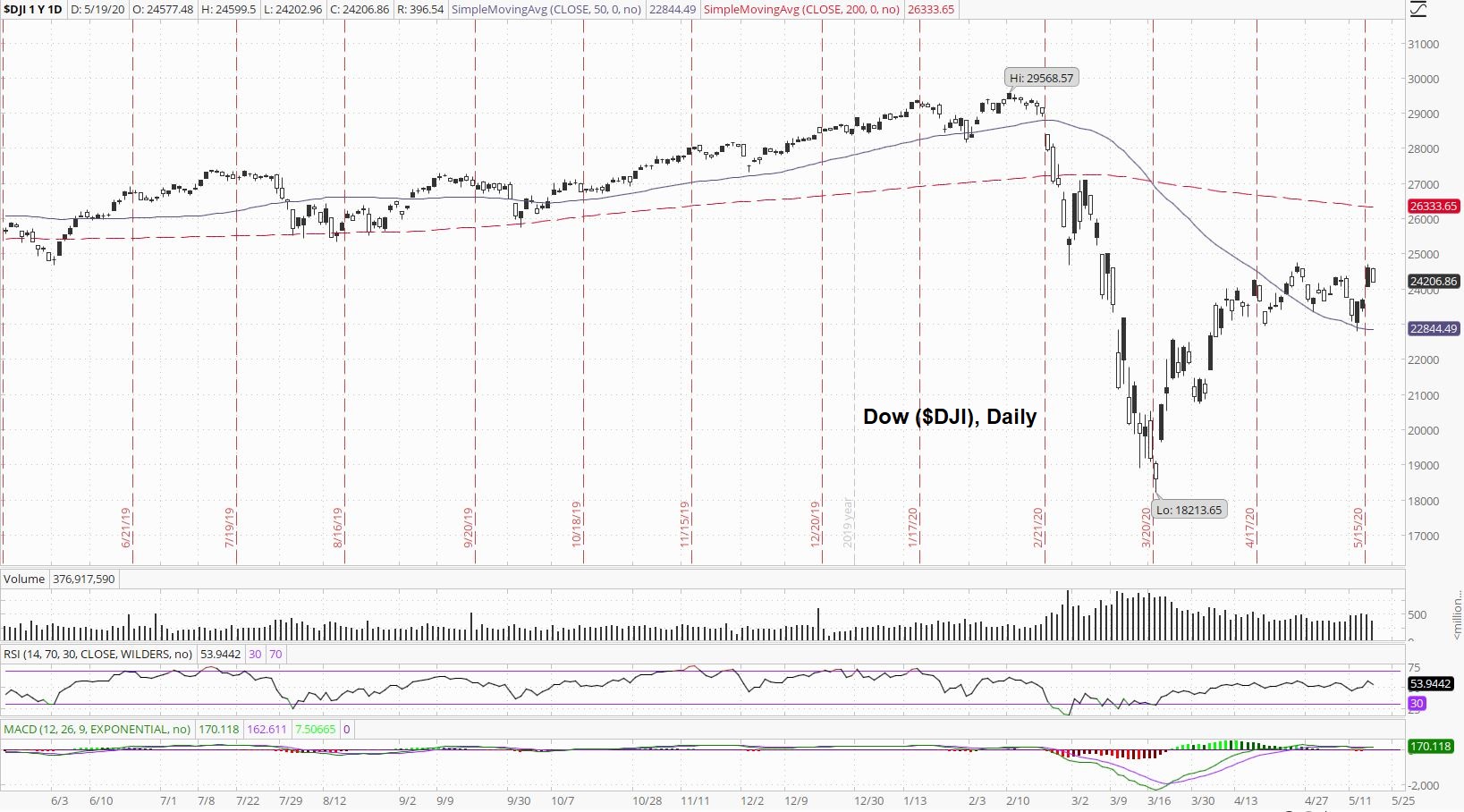 And if there's follow through momentum to the downside in the stock market, plus a refilling of the gap from Monday, suffice to say the stock market bulls must be very nervous right now.

Interestingly, there is a lot of lively discussion about whether we're witnessing the start of a new bull market in stocks, or whether we've been in one of the most epic stock market bear market rallies of all time?

Bull-bear tug-of-war aside, what else could be causing increased uncertainty in the markets on a fundamental level?

The reopening of the economy could be causing uncertainty. 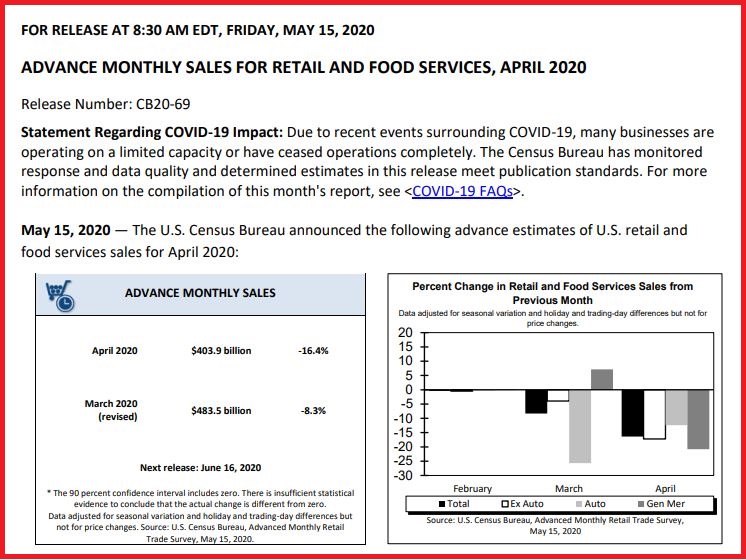 States are now beginning to re-open, and we could see a pick-up in retail sales in May from April, but in general, many people argue the economy isn't done contracting just yet.

Here's the point, and I'll ask it as a question: Has the US stock market gotten "ahead of itself" with regards to how fast Main Street can recover?

On Sunday, Fed Chair Jerome Powell was on the CBS television show 60 Minutes to discuss, among other things, the Fed's monetary policy of late. Many think of the 60 Minutes apperance as a "whatever it takes" moment for Powell and the Fed to keep the markets liquid, solvent, and functioning smoothly, which many interpret as to keep the stock market "going up".

The reassurances continued Tuesday, May 19th, and included Treasury Secretary Steve Mnuchin joining Powell for a virtual testimony before the Senate Banking Committee.

If the testimony, questions, and answers could be summed up in one sentence, it would be this: The Fed & the Treasury are generally doing as good of a job as they can, and they're prepared to do more.

The timing is critical and cannot be understated as Congress is currently looking at what will now be the 4th or 5th round of fiscal stimulus, depending on how one does the count. 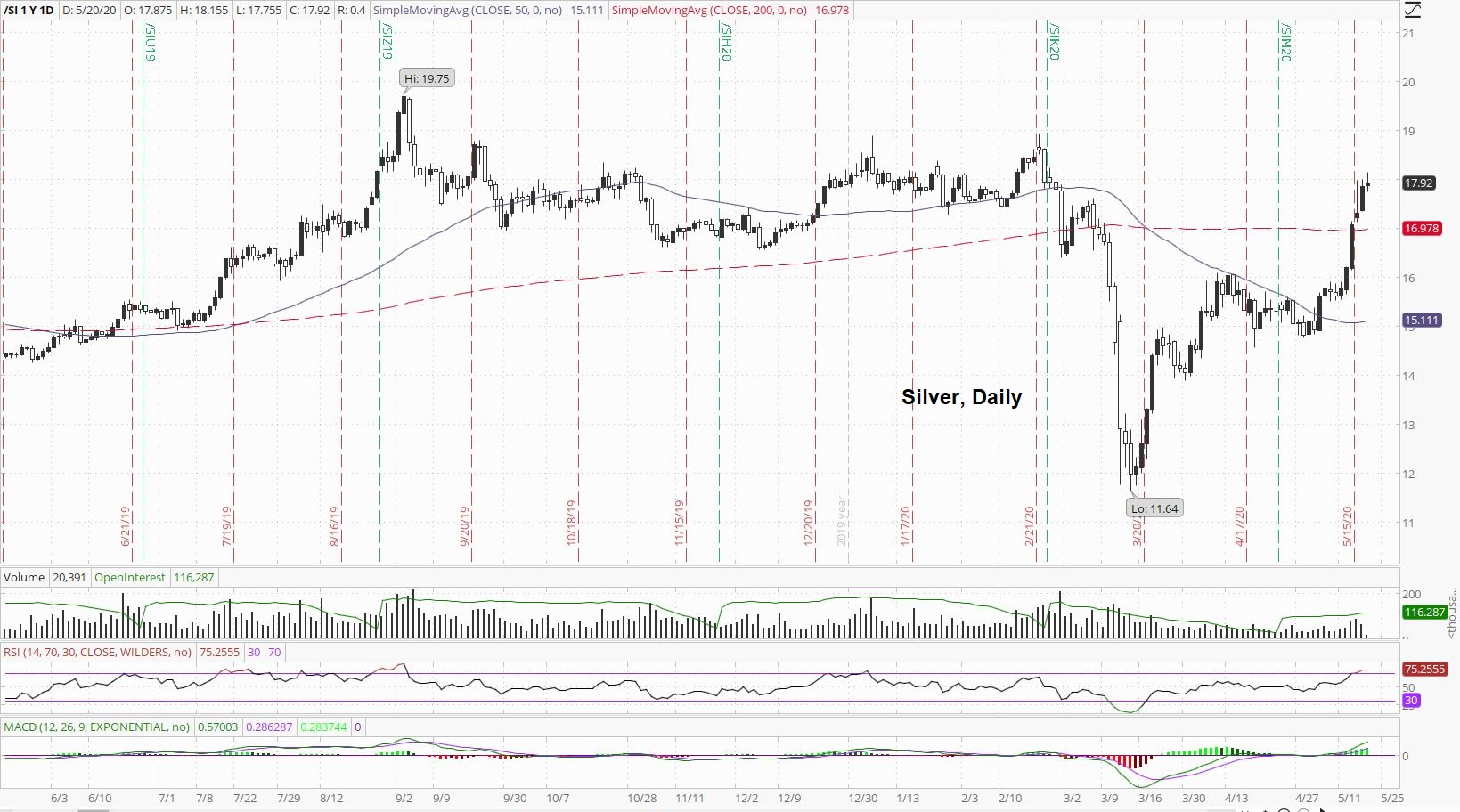 Silver has really punched through its major moving averages with authority, although many traders will be getting nervous about that 75-handle on the Relative Strength Index.

Possibly off-setting what some would consider silver being technically "overbought" is the fact that the gold-to-silver ratio was at a cyclical, historic extreme: 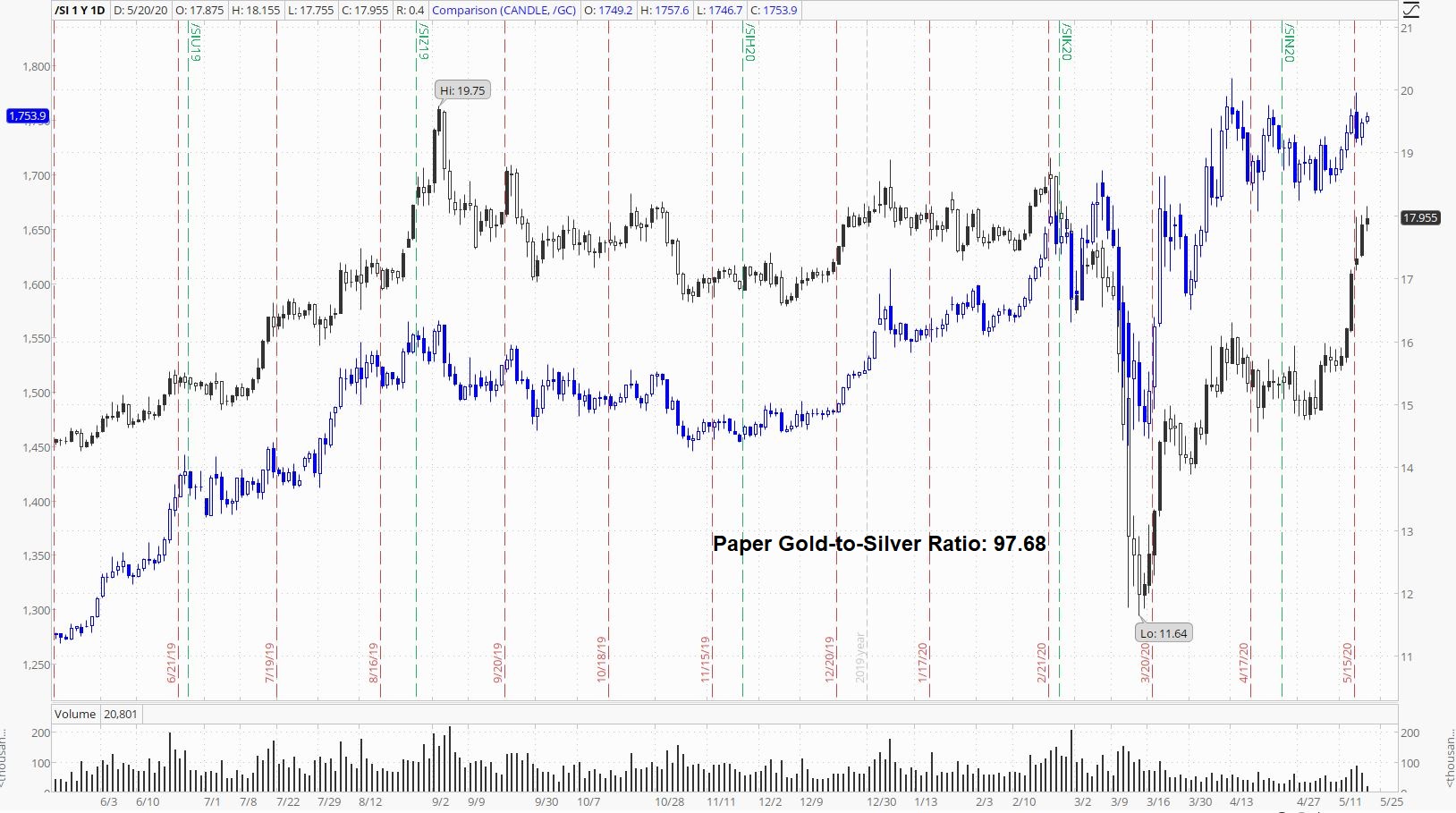 Said differently, silver was extremely underperforming gold, and even though the ratio is now under 100, many would still consider that reading extreme in regards to the historical mean. 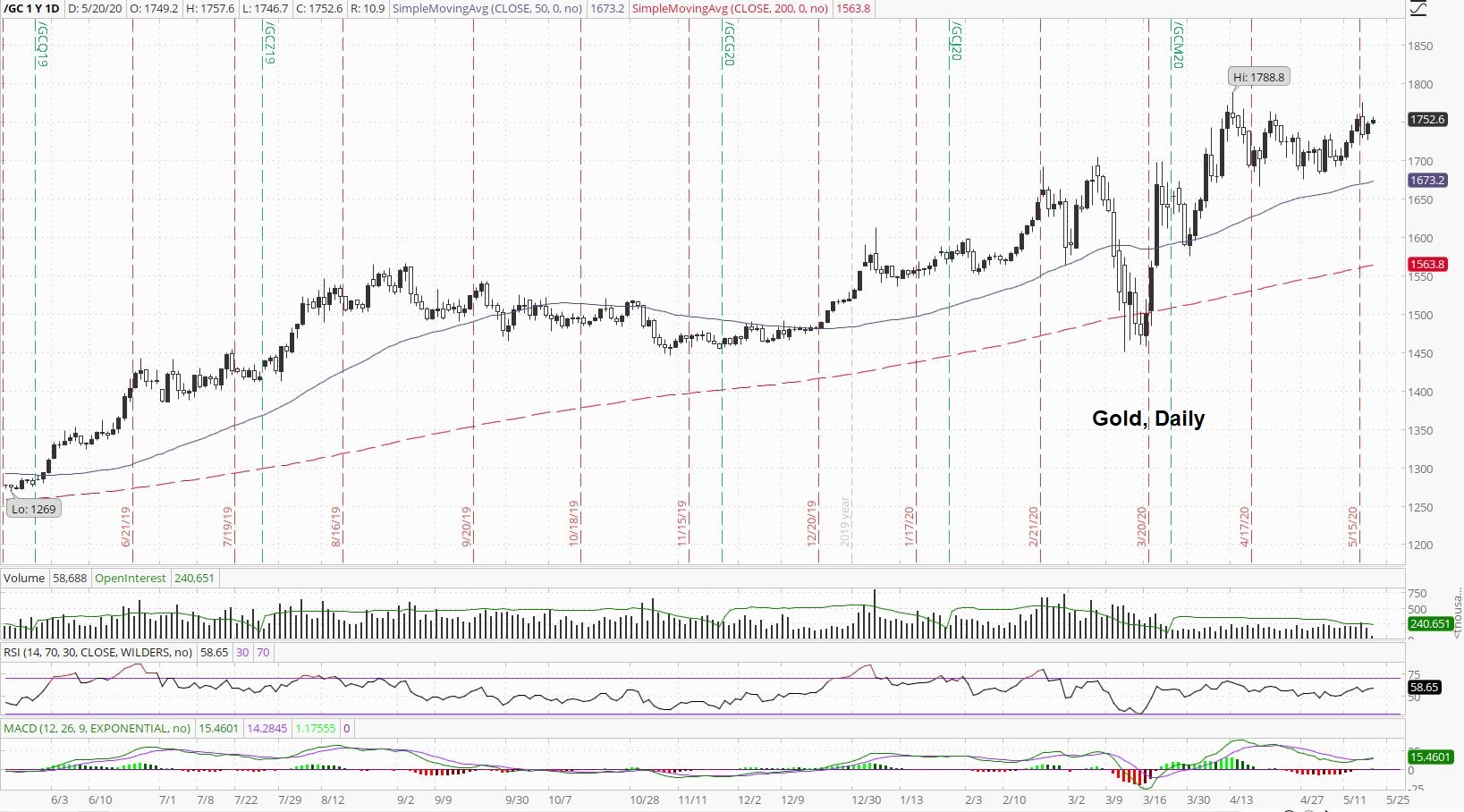 Once $1800 is taken out, it will likely be all eyes on the yellow metal as we approach all time nominal highs in US dollars.

Palladium has been on a tear: 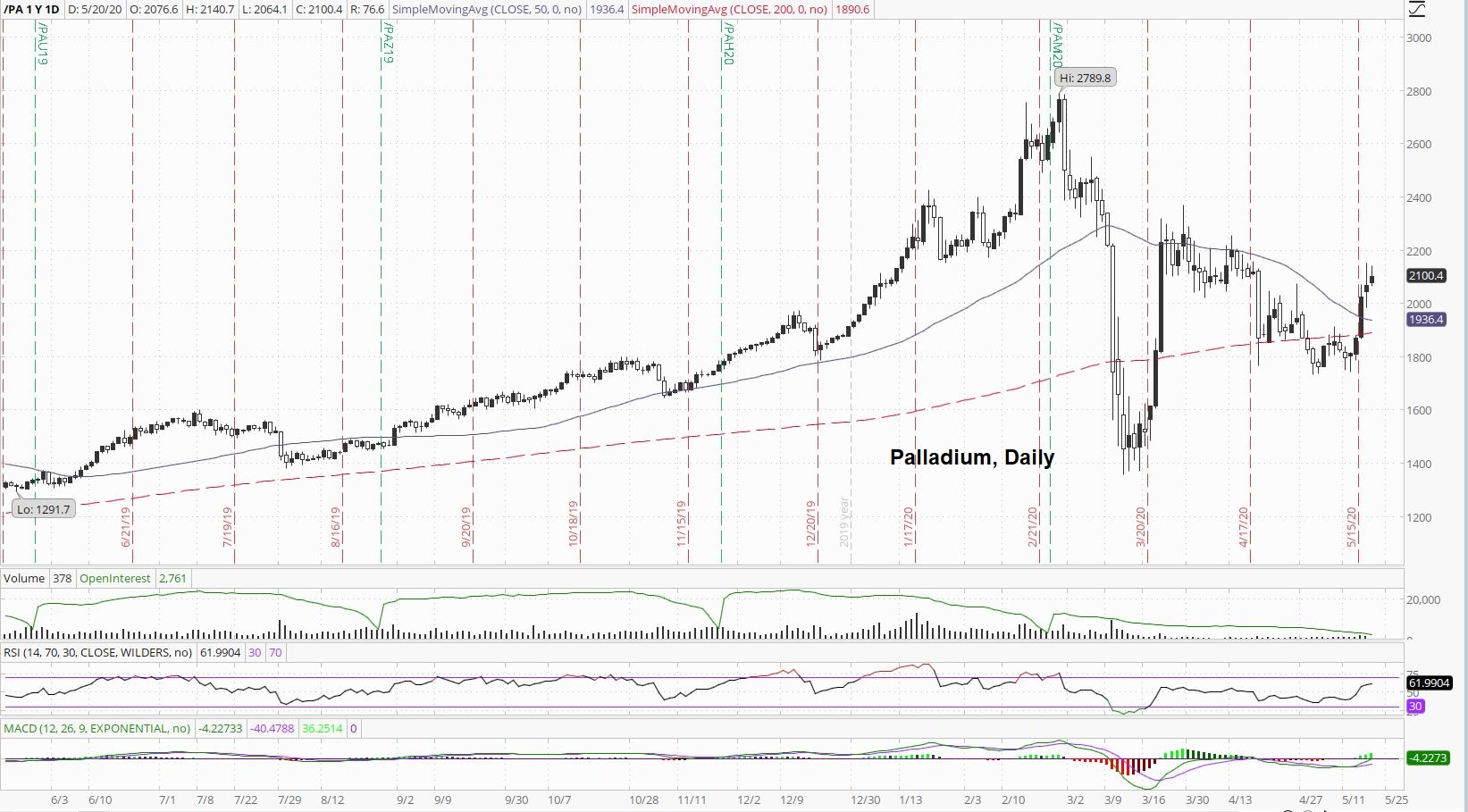 Price is back above $2100, and it's safe to say the techicals are supportive of a continued run, although it would be nice to see some more trading volume.

On a percentage basis, platinum is up even more than silver since last Wednesday's high: 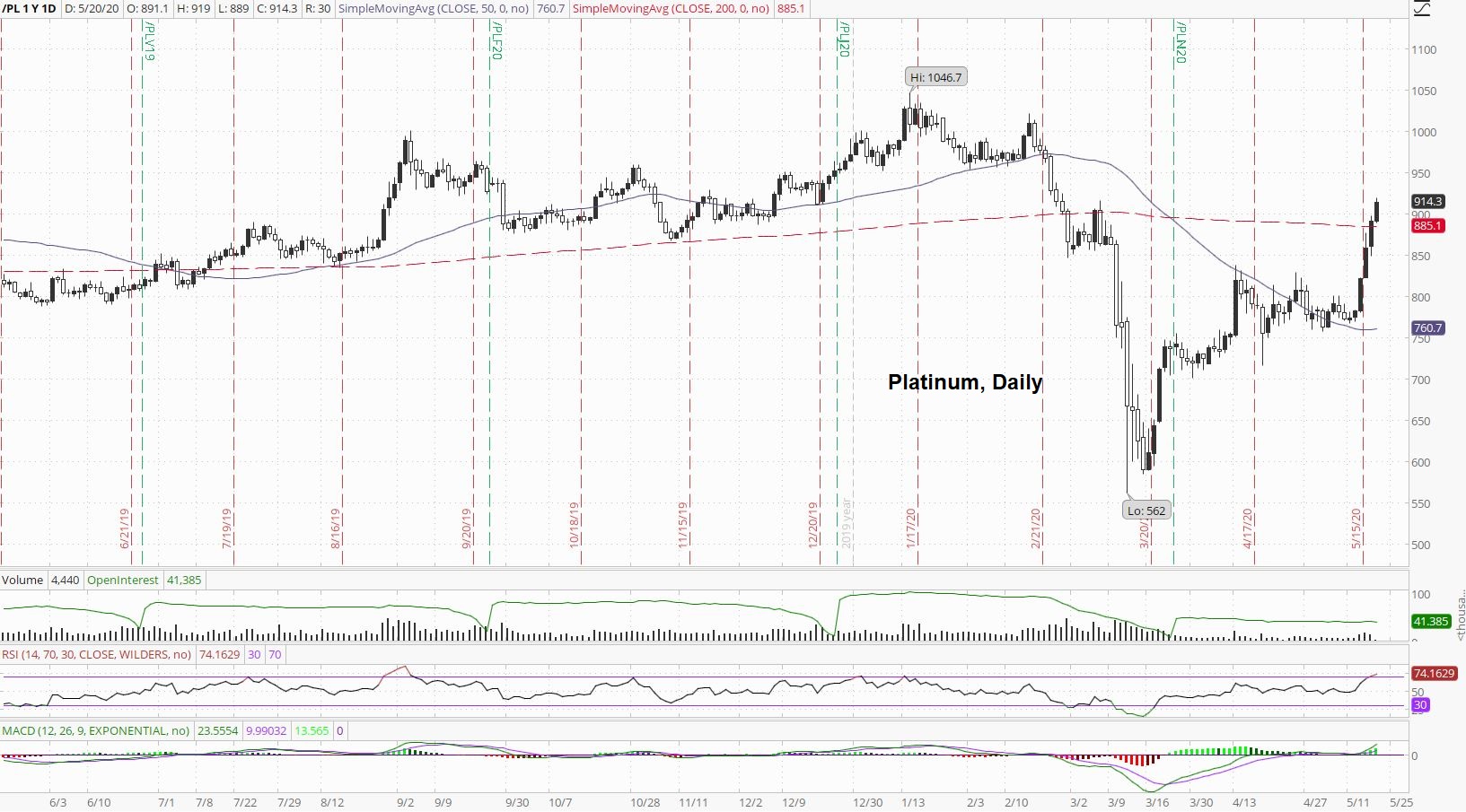 All in all, the precious metals are really looking good here, especially silver and platinum.

Copper continues to climb one epic wall of worry: 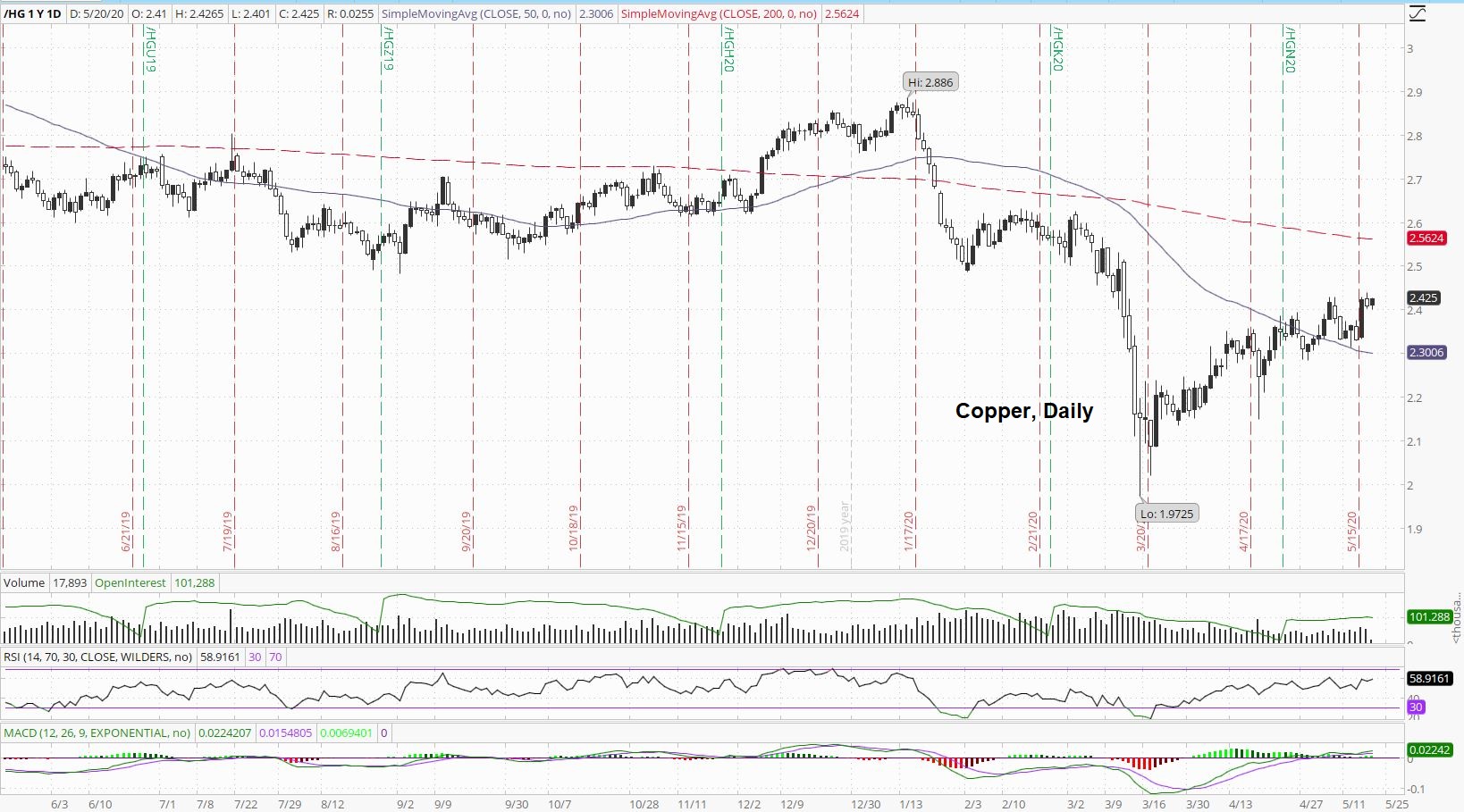 I would not be surprised to see a quick re-testing of the 50-day, or perhaps support at $2.20.

I say that about copper, in part, because we're still in a battle between crude oil consumption and crude oil storage: 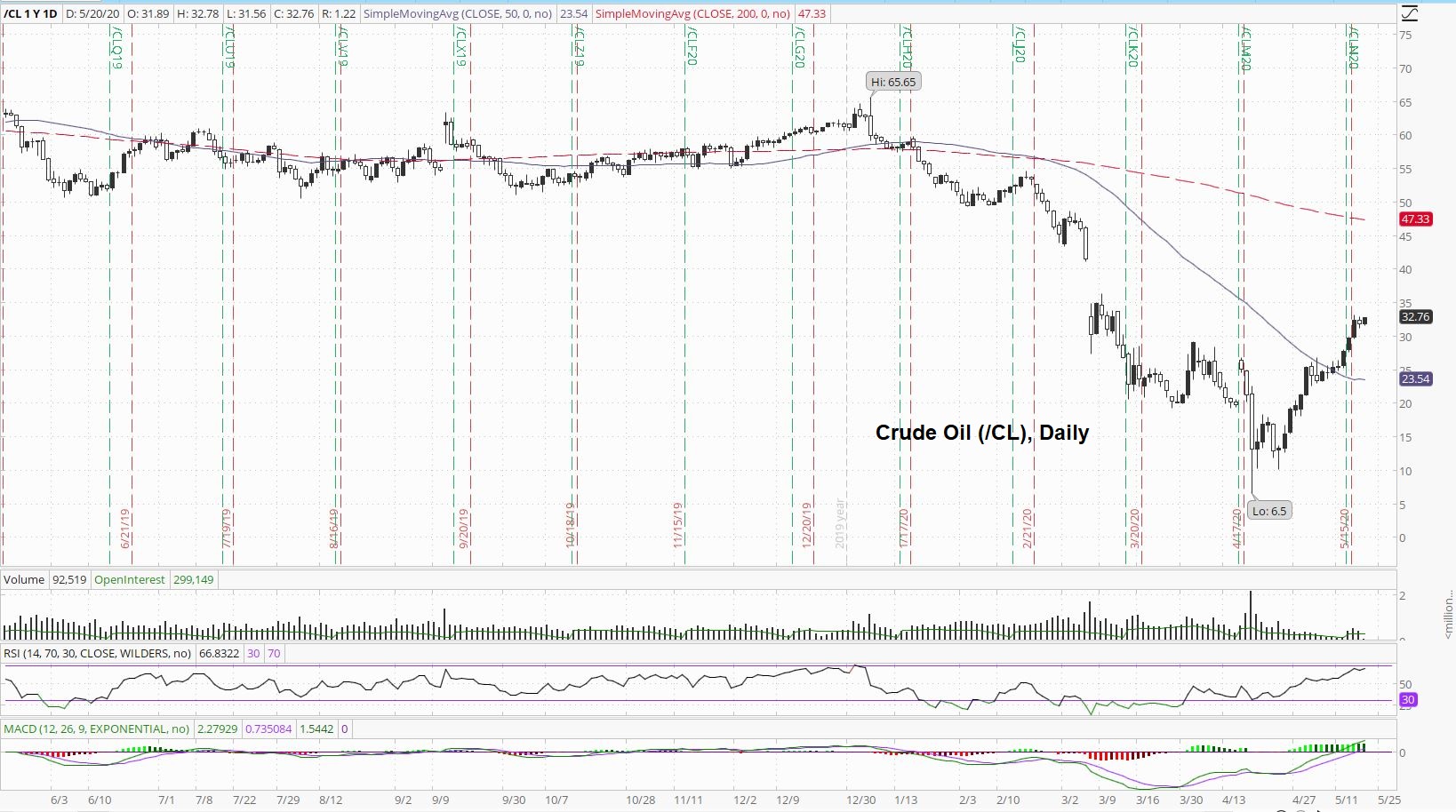 Will it be a double bottom, or have we seen the bottom?

It was risk-on in the stock market on Monday, and as such, we saw one of the biggest moves in yield on the 10-Year Note in a while: 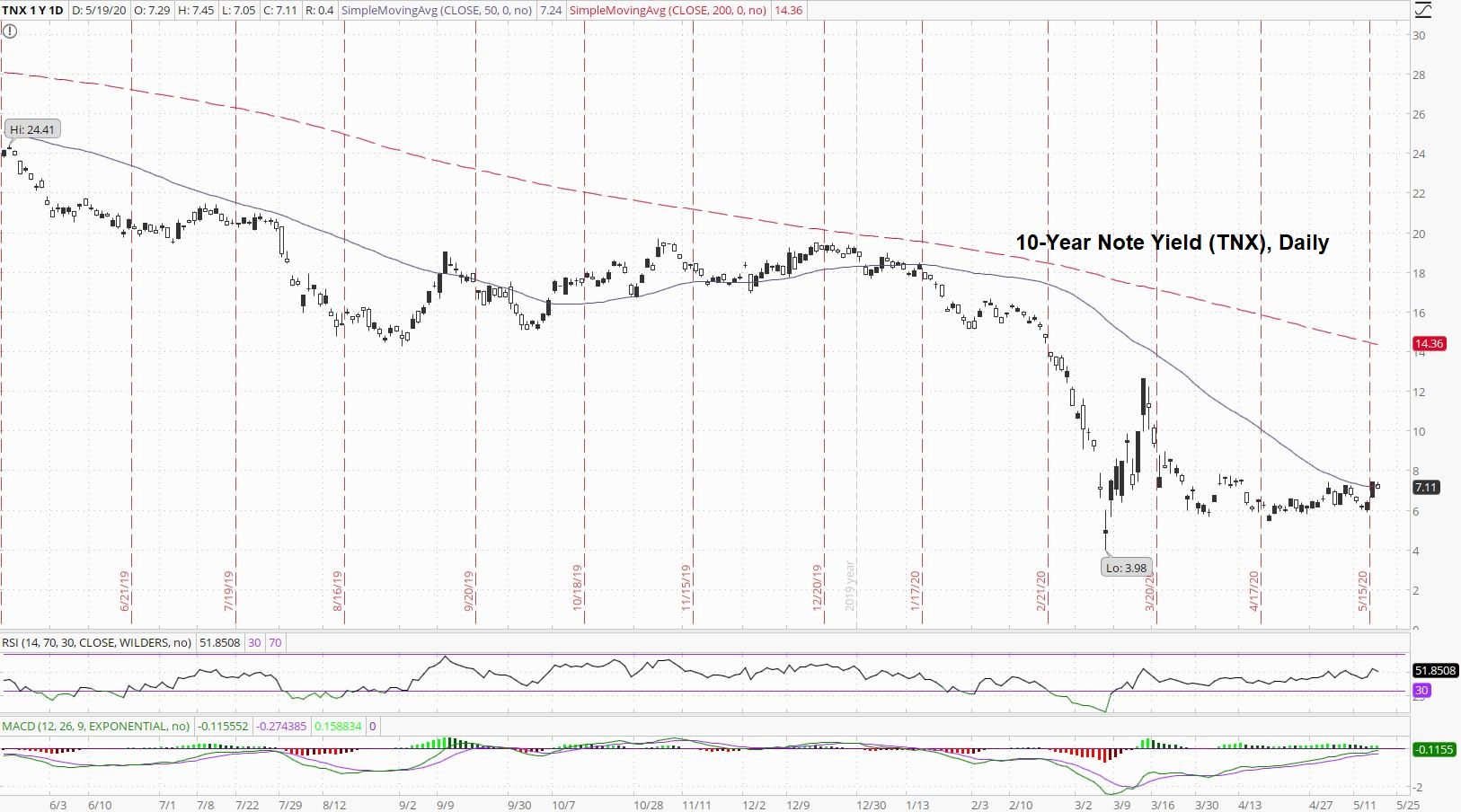 Finally, the US dollar index is making a trip down to the support line of its sideways choppy channel: 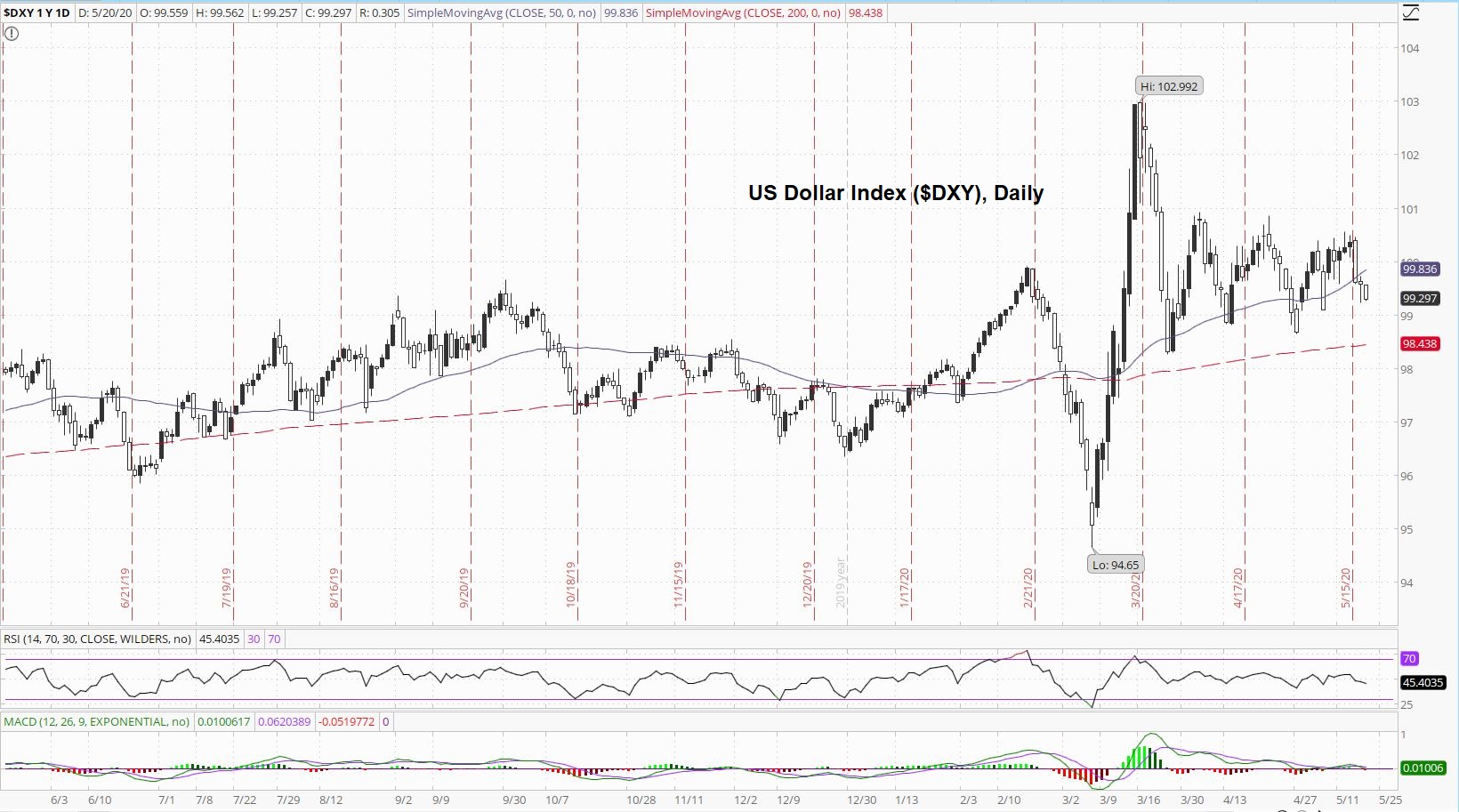 If the dollar breaks-down here, a US dollar that's weaking relative to other currencies would mean diminished purchasing power for those who hold and use dollars, just at a time when the cost of basic necessities, such as food, is rising not insignificantly.