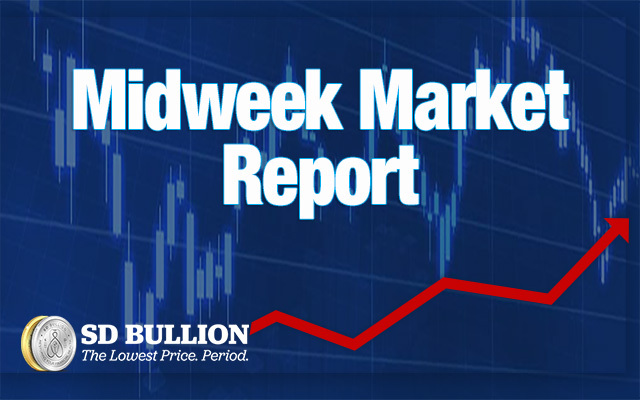 The Fed concludes its most recent two-day FOMC Meeting today at 2:00 p.m. EST, and Fed Chair Jerome Powell gives a press conference at 2:30. Since the Fed’s statement is meticulously crafted and written so as to induce, or not, text parsing HFT algorithmic Robo-trading of the markets, the press conference will be the important event of the day, especially considering recent developments in the markets and in the economy. That is to say, while the expectations of Fed actions have been pretty clear with regards to Fed policy, such as interest rate policy, as in, the Fed will not begin to "hike" interest rates for a long time, there have been some brand new inflationary developments over the past three days which can quickly become very problematic for the Fed.

Sure, some of the developments are “transitory”, such as the USDA Summer food assistance program in which direct deposits (to EBT Cards/Debit Cards) will be made for food assistance in the amount of $375 per month, per eligible child, over the Summer months (an estimated 30 million children will get these benefits), so that particular brand new program will in fact start and end, but in all likelihood, another program will take that program’s place. Perhaps it will be the USDA’s Fall Food Assistance Program?

Regardless, there have been other developments that shout, “this inflation is not transitory at all”. For example, on Tuesday, April 27, 2021, President Biden raised the minimum wage for all Federal government contract workers to $15 per hour. There are a couple of interesting things to note about that Executive Order.

First, notice the total non-transitory nature of the order itself with just the following tiny excerpt (bold added for emphasis and commentary)

In fact, this inflation, the price of labor, or wage inflation, doesn’t even begin until next year! Furthermore, the minimum wage will be adjusted annually. I asked this question last week, but I guess I have to ask it again: Just how many years can inflation be raging while still retaining its "transitory" label?

Now here’s the real kicker, however, which actually immediately follows the excerpt above (again bold added for emphasis and commentary)

“...and shall be: (A) not less than the amount in effect on the date of such determination; (B) increased from such amount by the annual percentage increase in the Consumer Price Index for Urban Wage Earners and Clerical Workers (United States city average, all items, not seasonally adjusted), or its successor publication, as determined by the Bureau of Labor Statistics; and (C) rounded to the nearest multiple of $0.05...”

The “not less than the amount in effect” means that once the minimum wage is raised, it can not go back down. So much for the “transitory” nature of inflation there! Additionally, the minimum wage will be directly linked to the CPI, and that is also problematic for the Fed. It is problematic in part because the Fed uses Personal Consumption Expenditures, PCE, when measuring and implementing Fed policy, but in the real world, hourly workers will be getting wage growth not based on PCE but CPI. Furthermore, the problem here is that this inflation will feed on itself. In other words, the Federal government, anytime it raises the minimum wage, establishes a new price floor for the cost of labor, meaning wages can only go up. Said differently, higher CPI begets a higher minimum wage, which begets higher CPI, which begets a higher minimum wage, and so on, and so forth.

Here’s some food for thought: What happens when a contractor, who has a multi-year Federal government contract, is estimating spending a certain amount per year on labor, yet inflationary pressures build or even surprise to the upside, and therefore, so do potentially large annual increases to the minimum wage, with just 90 days of notice given to the contractor, making the cost of labor unaffordable to the contractor?

Here’s the rhetorical question: What is going to happen to prices, or store shelves, or whatever, when in addition to all of the other arguably cushy Federal government benefits that a person might be currently receiving, such as the one’s base monthly food stamp allotment or one’s extended and/or supplemented pandemic unemployment insurance benefits, in July, August and September, a family with four eligible children directly receives an additional $3,500 per month as the combined result of only two programs, the USDA’s Summer food assistance program and the American Rescue Plan’s child tax credit payments, which begin in July and continue through December?

And here’s the overall point: The Fed and Fed Chair Jerome Powell can pretend all they want that the inflation is “transitory”, but really, just looking at the numerous facts all around us in the real world, not only will all of this inflation be persistent, but this inflation will also be a positive feedback loop, and that’s not a good thing. Unless, of course, you’re the Fed, and you’re welcoming this higher cost of living and declining US dollar purchasing power. Either way, in my opinion, we’re way past the point of coming up with a plan to deal with this highly inflationary environment because this highly inflationary environment is already here, and higher inflation is in the chute in already pre-programmed stages for months and years to come.

Now is not the time to formulate a plan for inflation. Now is the time to be actively executing one’s plan.

And now, let’s go over the charts.