Gold's broken-out over the last week, silver's had some interesting volatility, platinum put in a massive 1-day move the the upside, and more...

The precious metals are on the move!

Some of the highlights include:

Silver moving from the $14s just last week to battling $16 this week.

The question is, what’s going on that could be causing the metals to be making these moves?

While there are a number of technical and fundamental reasons for the metals to be moving like they are, I’d like to discuss three of them:

When it comes to uncertainty about Main Street, this could be putting a bid in the precious metals as a hedge against this uncertainty. The uncertainty comes form the debates taking place across the nation about how to re-open the country.

On the most hopeful side of the debate, everybody will get back to work come May 1st, including those tens of millions of people who’ve lost their jobs over the last few weeks, and the real economy on Main Street will get a “V”-Shaped recovery.

On the most dreadful side of the debate we have, well, another year-and-a-half of lockdown, massive unemployment and basically economic collapse.

Surely, somewhere in the middle lies the solution, but it’s all up-in-the-air right now, and therein lies the uncertainty.

Further placing a bid under the precious metals could be the monetary inflation and debt creation undertaken by governments and central banks around the world.

Gold & silver, which are first and foremost money, are not debt-instruments, but real, hard savings. In other words, gold and silver coins cannot be simply printed or double clicked into existence as unbacked, debt-based fiat currency can, which happens to be all of the sovereign paper currencies at this particular point in history. All of this debt creation, or, quite frankly, assuming the debt will be inflated away, this direct, plain-old money printing is inflationary, and gold & silver are hedges against inflation as an infinite amount of fiat currency chases a finite amount of things, including gold & silver.

Finally, there can also be increased savings in the form of precious metals.

Please excuse the overuse of the word safe.

It can’t be stressed enough that gold & silver are safety in these challenging times.

Here’s something that’s quite challenging, pun intended, in and of itself: 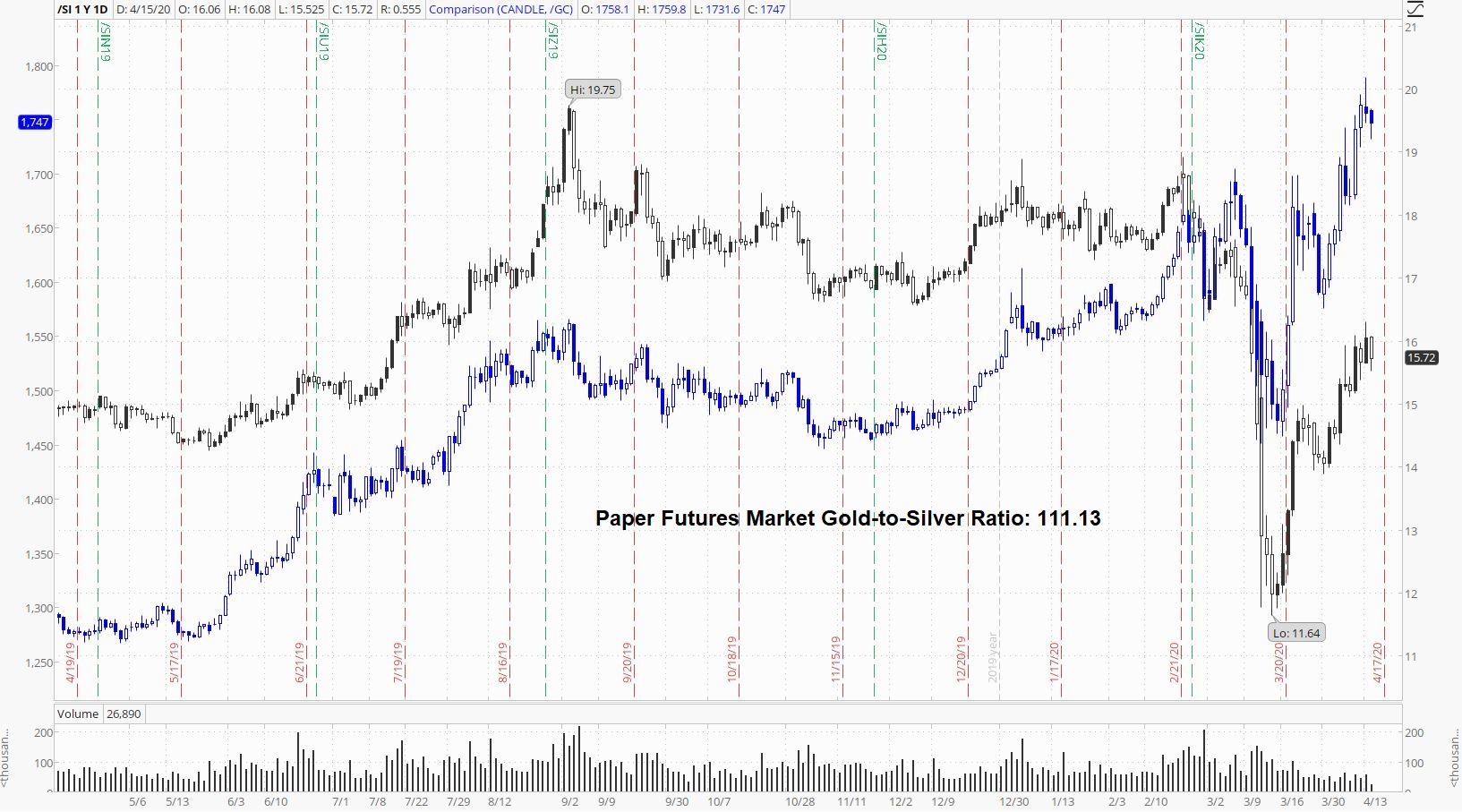 In fact, if we’re talking about real, physical metal “in-hand”, it may be more than just challenging if not downright impossible for a person to buy over 111 ounces of silver for one single ounce of gold.

Silver has had some interesting volatility over the last week: 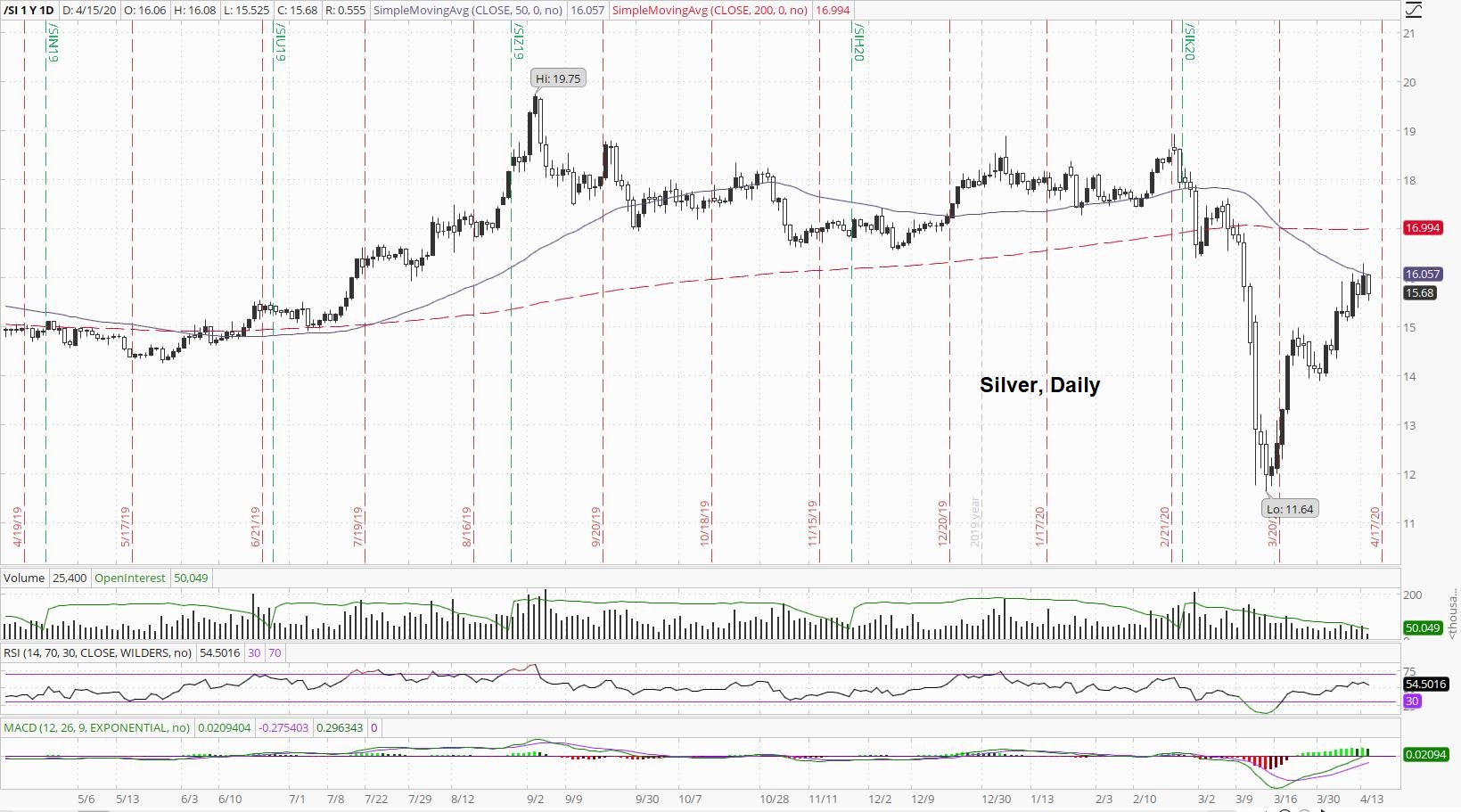 Silver’s paper futures market price was under $14 per ounce on April 6th, and price breached $16 per ounce yesterday.

After testing $1700 once, gold broke-out decisively through the level late last week: 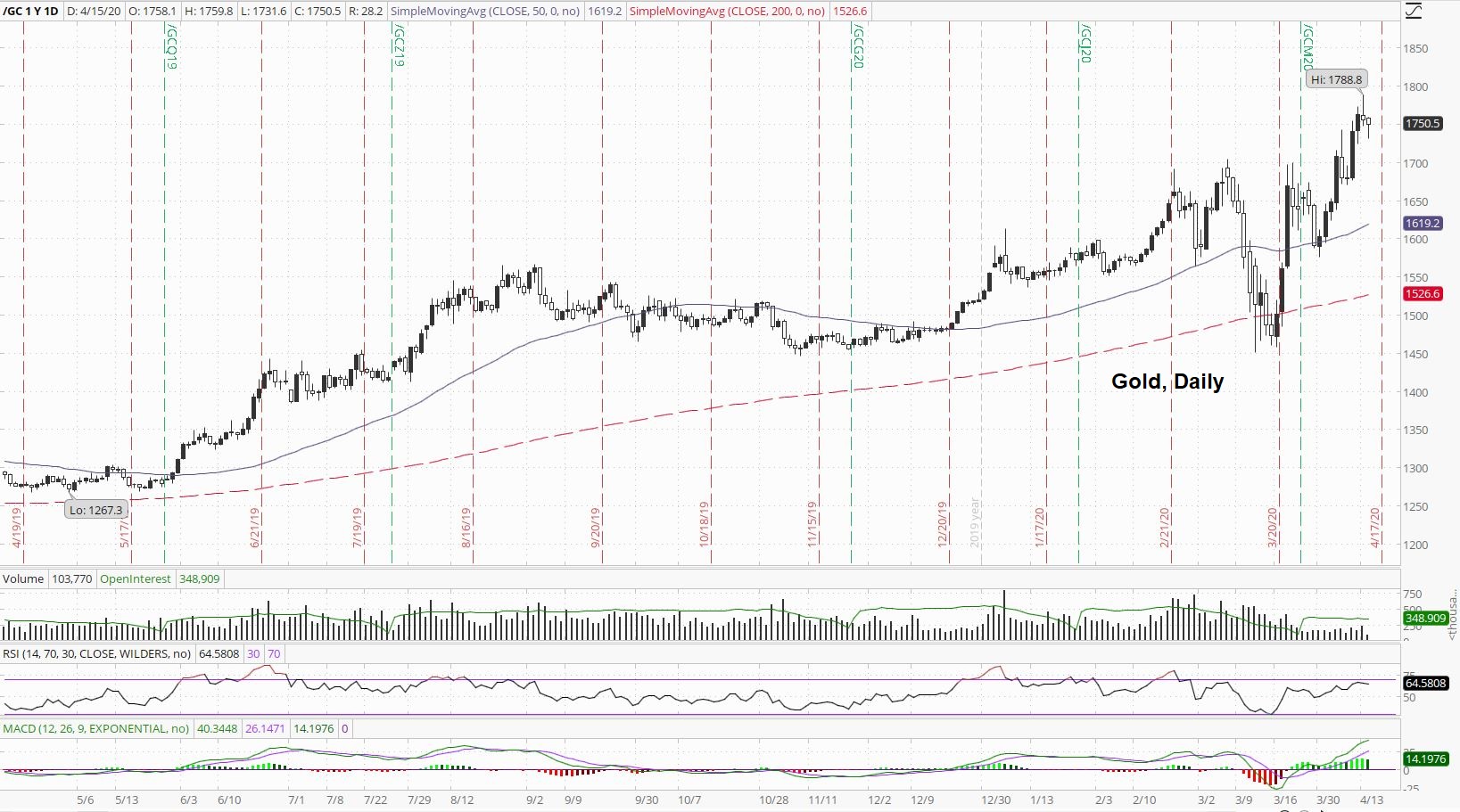 Palladium’s been more or less straddling its 50-day moving average: 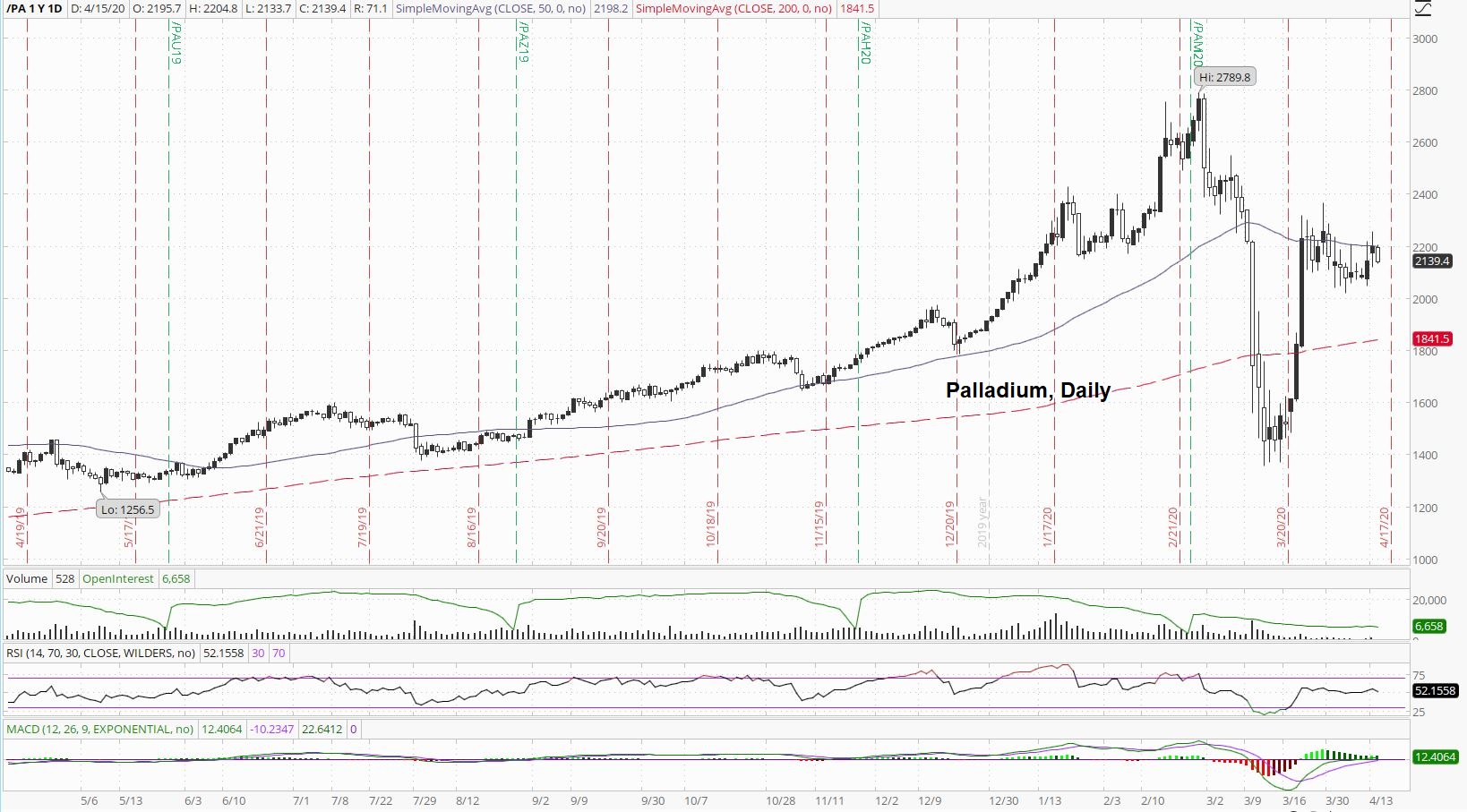 That’s what palladium has done on a regular basis for years now, albeit with a ton of volatility this time around including an epic crash and a massive “V”-shaped recovery!

Platinum had an absolutely massive move which included punching through its 50-day moving average: 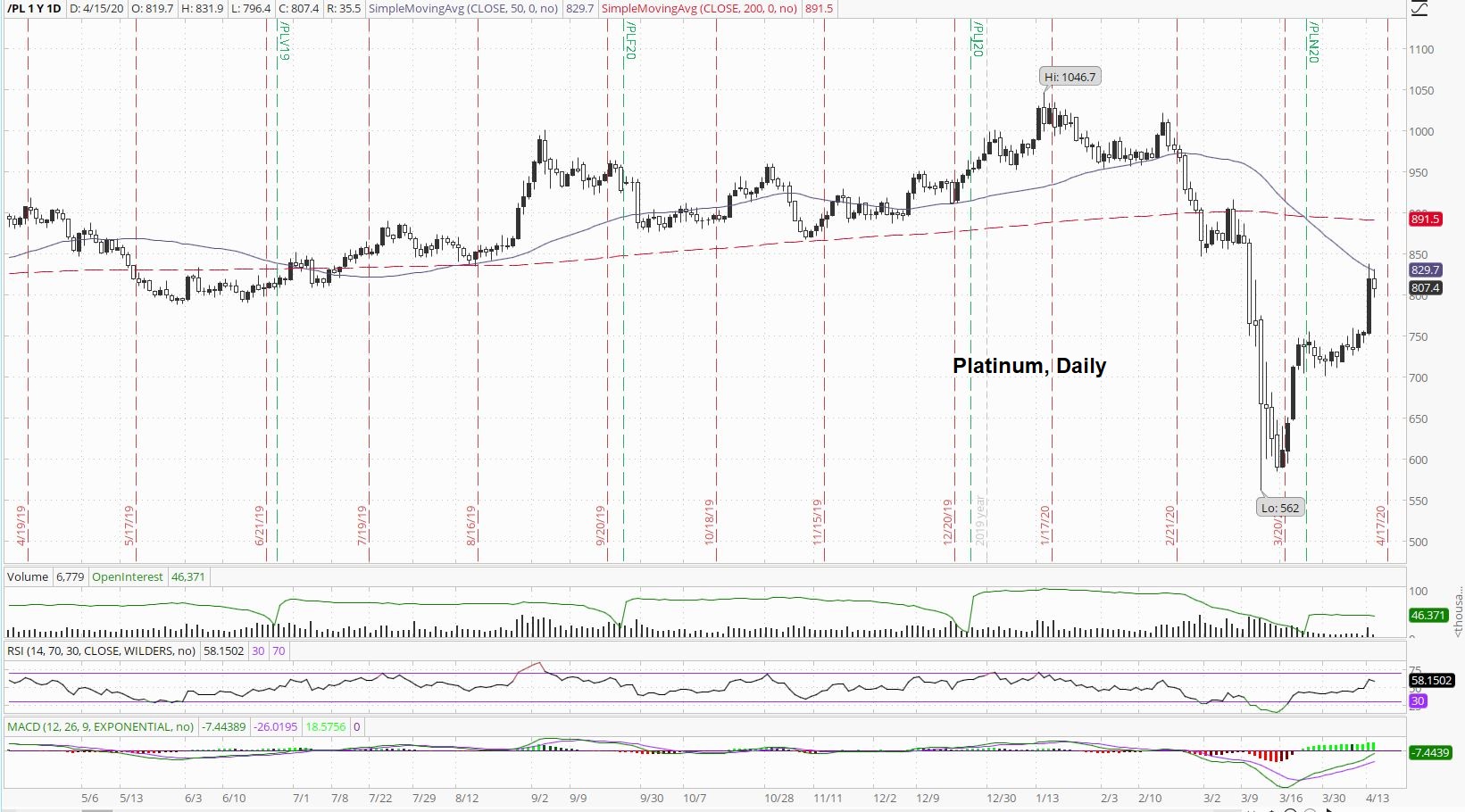 Yesterday’s move was about an $88 move from the low of the day to the high of the day, or nearly 12%!

It may not seem like it, but copper’s price is up over 15% from its spike low: 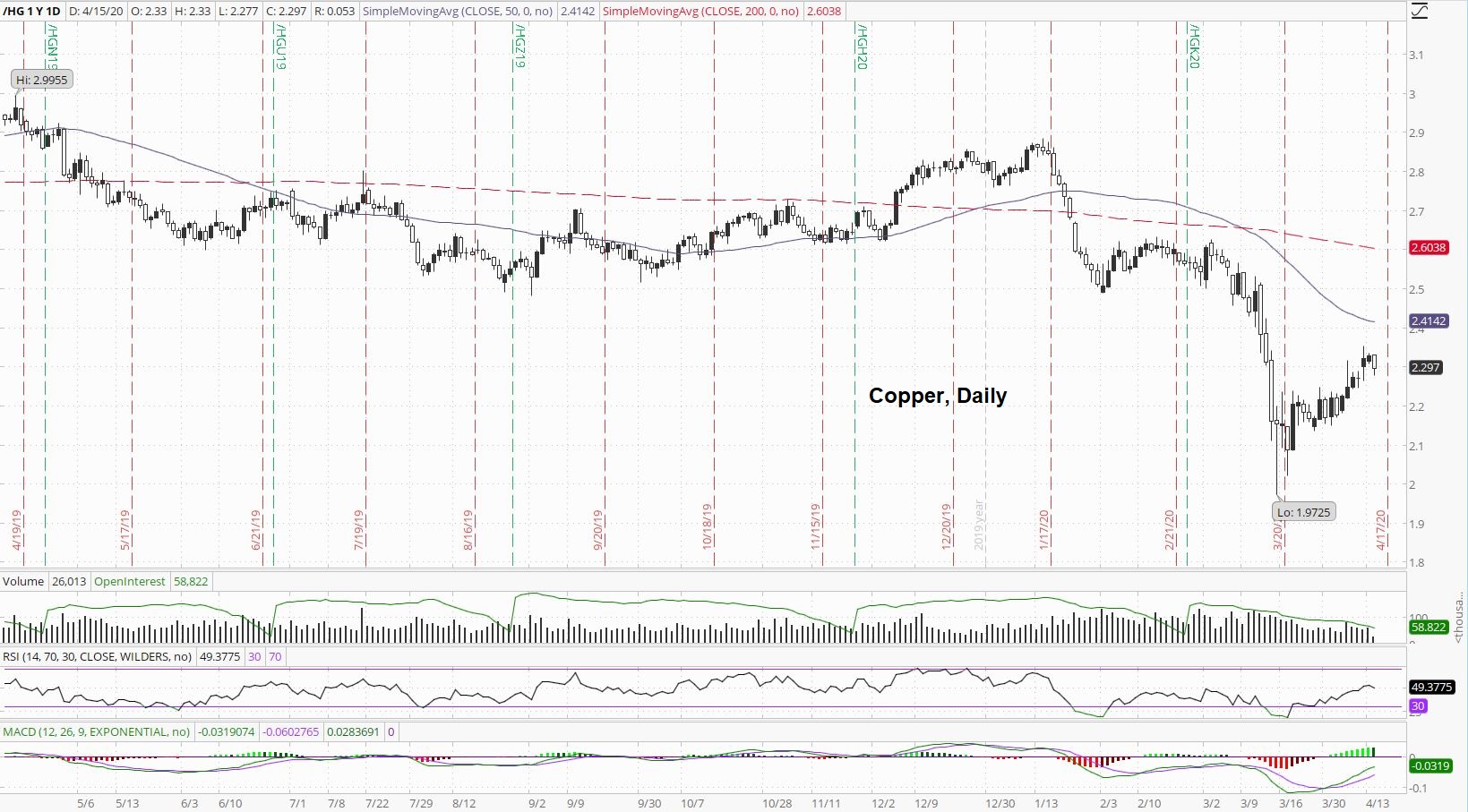 Is copper signaling the bottom is in for the commodities sector, or perhaps people are anticipating increased demand due to coming fiscal, public infrastructure projects in the United States and around the world?

Is crude oil double-bottoming in the short-term, has crude oil put-in a new lower-low on the way to fresh new lows, or is something else more fundamental going on, such as global storage filling up due to the drop in demand? 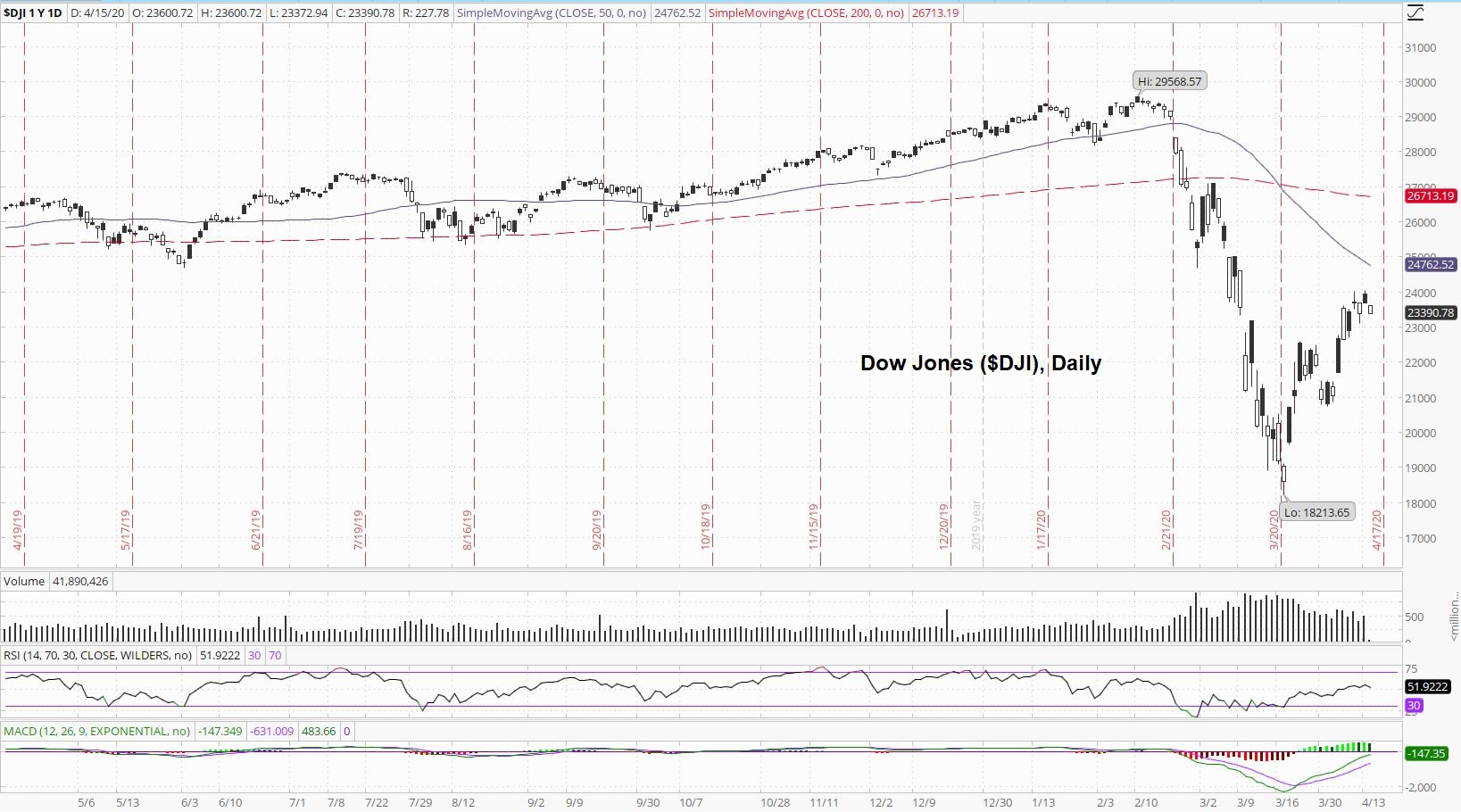 The Dow has been attempting to make a “V”-shaped recovery, but will it, and is it possible for the economy on Main Street to do the same?

The VIX is at a very interesting spot on the chart: 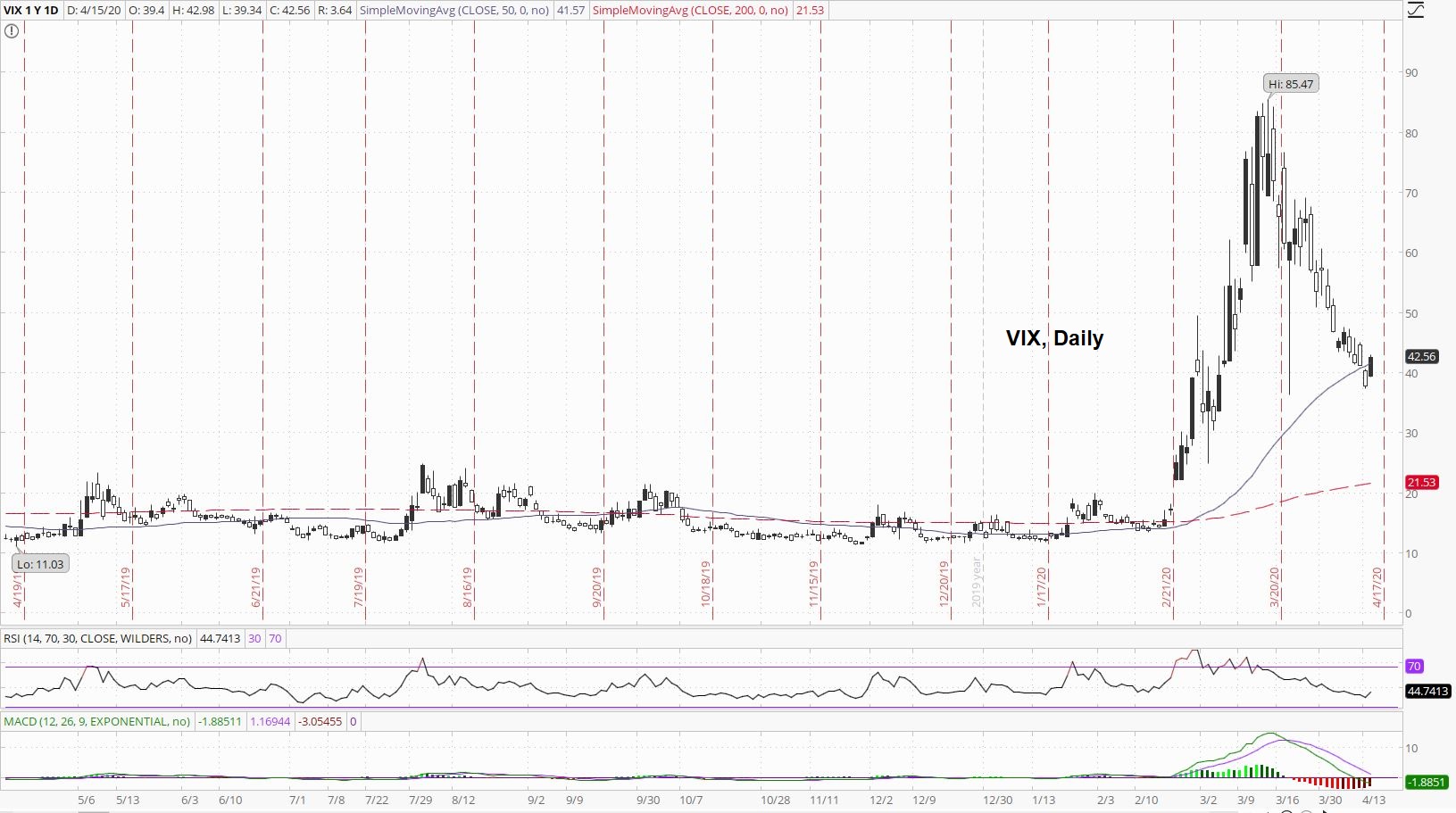 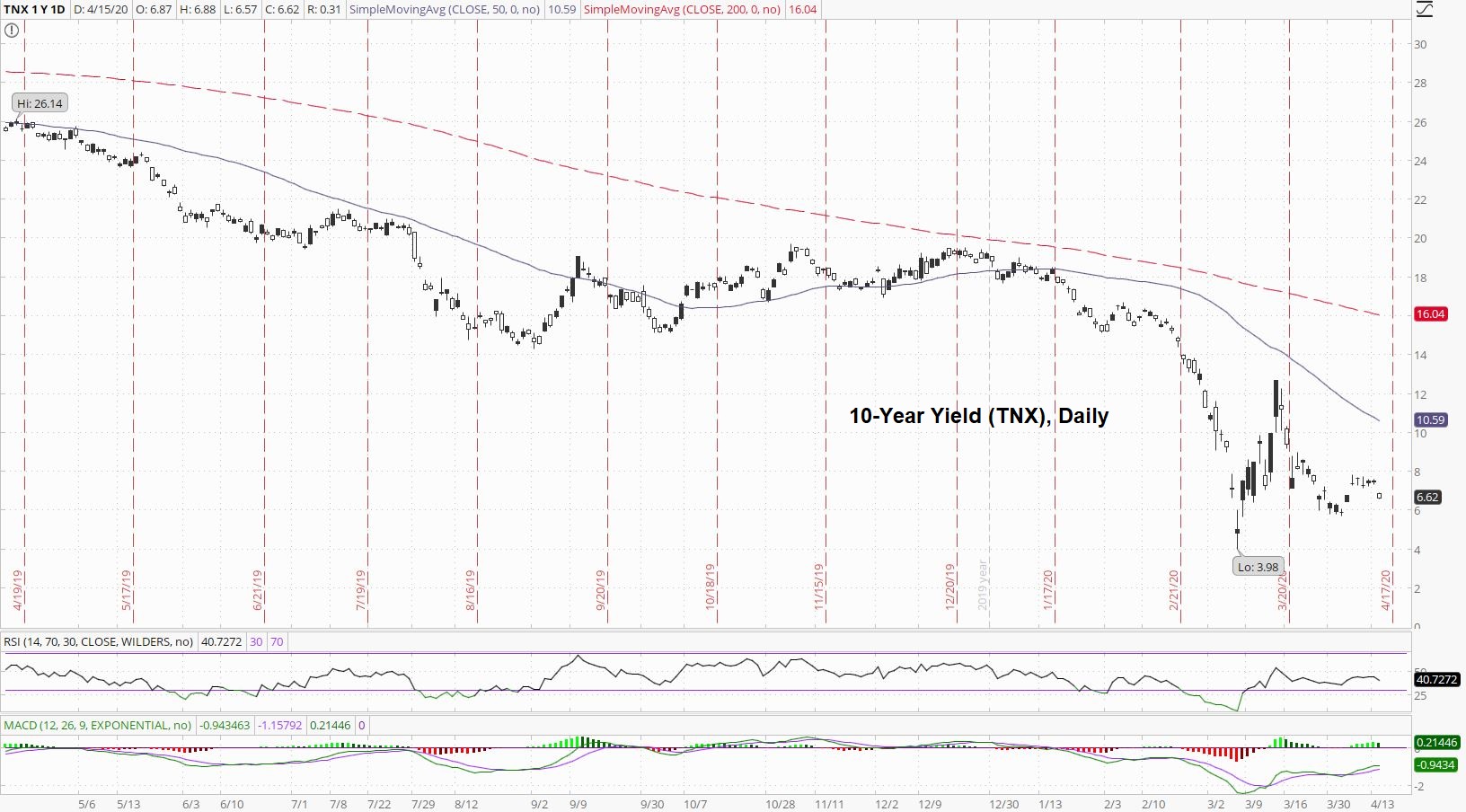 Is yield bottom-bouncing here, or does yield still have more room to move to the downside?

The US Dollar Index continues to have some major swings: 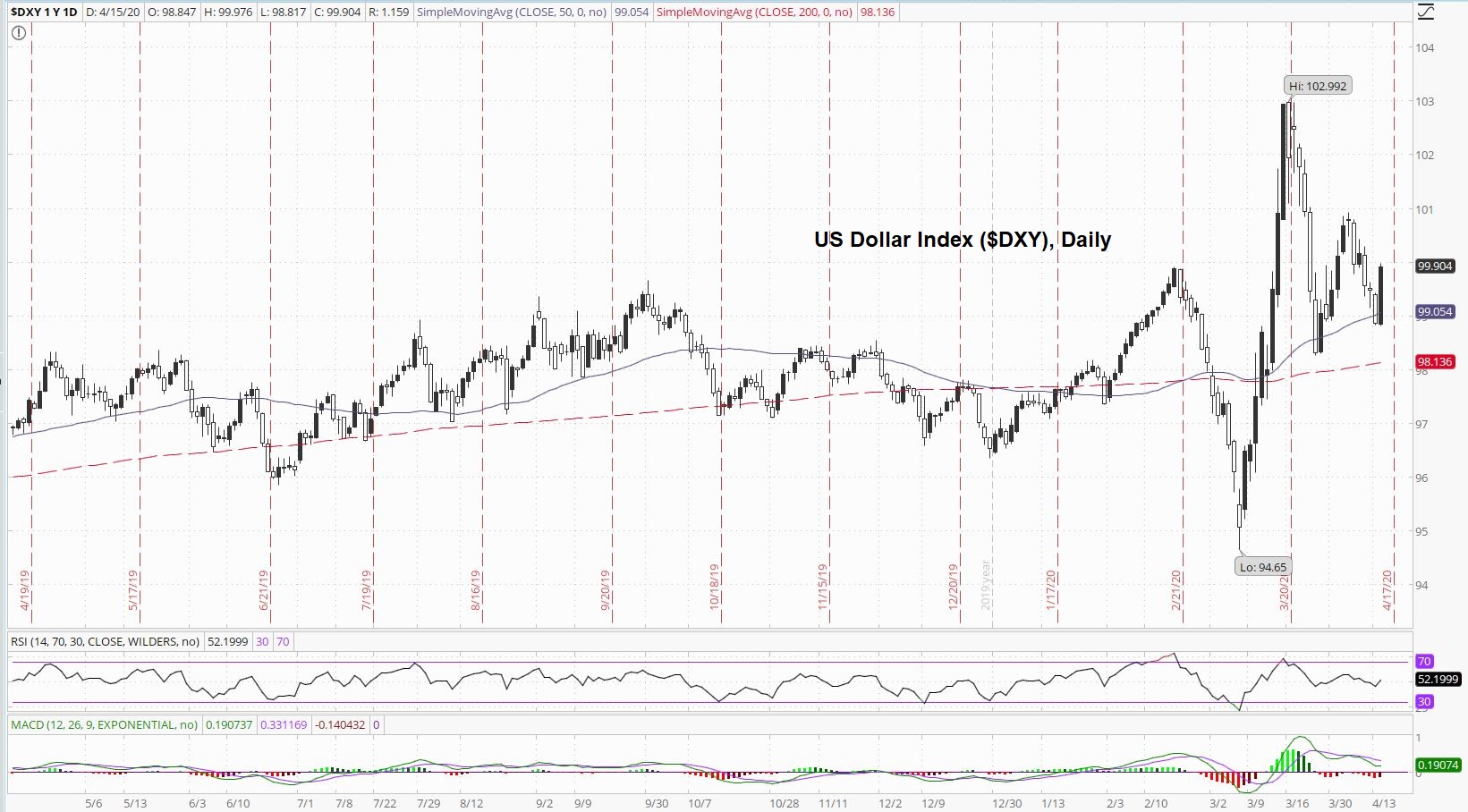 Barring central bank or government intervention into the currencies, it looks like amidst the volatility, 99 is trying to act as support.