Believe it or not, there is a proper term for marching in place. It’s called, “marking time”. I suppose what we’re also experiencing is akin to running in a hamster wheel, but I’ve never really liked hamsters and I did serve in the Army, so I’m biased like that. But no matter what we call it, gold & silver are simply churning.

Let’s review the fundamental backdrop to get an understanding as to why.

Here’s the question: Is any of this “bad” for gold & silver?

The short answer is “no”.

Specifically, gold & silver are hedging against uncertainty, so if anything, theoretically speaking, gold & silver should be bid for the “fear trade”. Of course, that is exactly what we see when it comes to physical gold and physical silver, although sadly, the price of gold & silver is determined by a proven-fraudulent paper derivatives market. Regardless, the outcome of the election doesn’t really matter, but rather, it’s all to what degree will either Trump or Biden be “good for gold”. Conventional wisdom has Biden being “better for gold” than Trump because, all things considered, a Biden Administration would borrow and spend more than a Trump Administration, and while every single currency on the planet checks itself to the US dollar, the only thing that provides a check for the US dollar is Gold & Silver itself.

LIGHT AT THE END OF THE RAGING PANDEMIC’S TUNNEL

More and more states going back down into lockdown mode. On the other hand, there is much hope in the rapid deployment and mass administration of the coronavirus vaccine. Still, the damage done on Main Street has been massively devastating, and with each week that passes without another round of fiscal stimulus making its way through the Federal government, regardless of what one thinks of the Welfare State, that is one week closer to another helicopter money drop for We the People, or at least those eligible US taxpayers of modest means. The bottom line is that there is indeed pent-up everything, including pent-up demand for many things, not only because of supply chain disruptions but also because of simply getting back to living life. Moreover, the next helicopter drop of free money from Uncle Sam will be highly consumer price inflationary, as saw already back in the Spring. Gold & silver are the best hedges against inflation.

The stock market is on fire, and so is Bitcoin and pretty much all other US dollar derived, financial market products. Granted, this is not a rising tide that lifts all boats, but rather, one or two Titanics floating around the ocean, en route to the port, or an iceberg, or whatever, and so, needless to say, there is a whole lot of risk that goes along with being in the paper, financial market products. From market holidays to internet kill switches to stock market glitches to outright government seizure, suffice to say, what I’m talking about here is something called “counterparty risk”, and a gold or silver coin, in hand, has none of that.

Those are just a few of the fundamental factors that are putting a floor under gold & silver prices. The point is that there is bullish pressure from all around, from the “fear trade” to the “inflation hedge trade” to the “risk-off trade”, and I didn’t even get into the “love trade” or myriad bullish factors also putting a floor under gold & silver prices. This is not to say they cannot go down more in price, and for the new Silver Bugs, stackers, and other smart investors out there, I hope they do go down in price rather deeply, just one more time, so that a few more people arriving just at the last possible moment for a spot on this train, which is now standing room only, have a fighting chance at surviving the mathematically certain US dollar hyperinflation.

In other words, higher prices are coming, any weakness is a gift horse, and further downside from here means “premium creep” will become a very real thing yet again, as it was at the end of March. 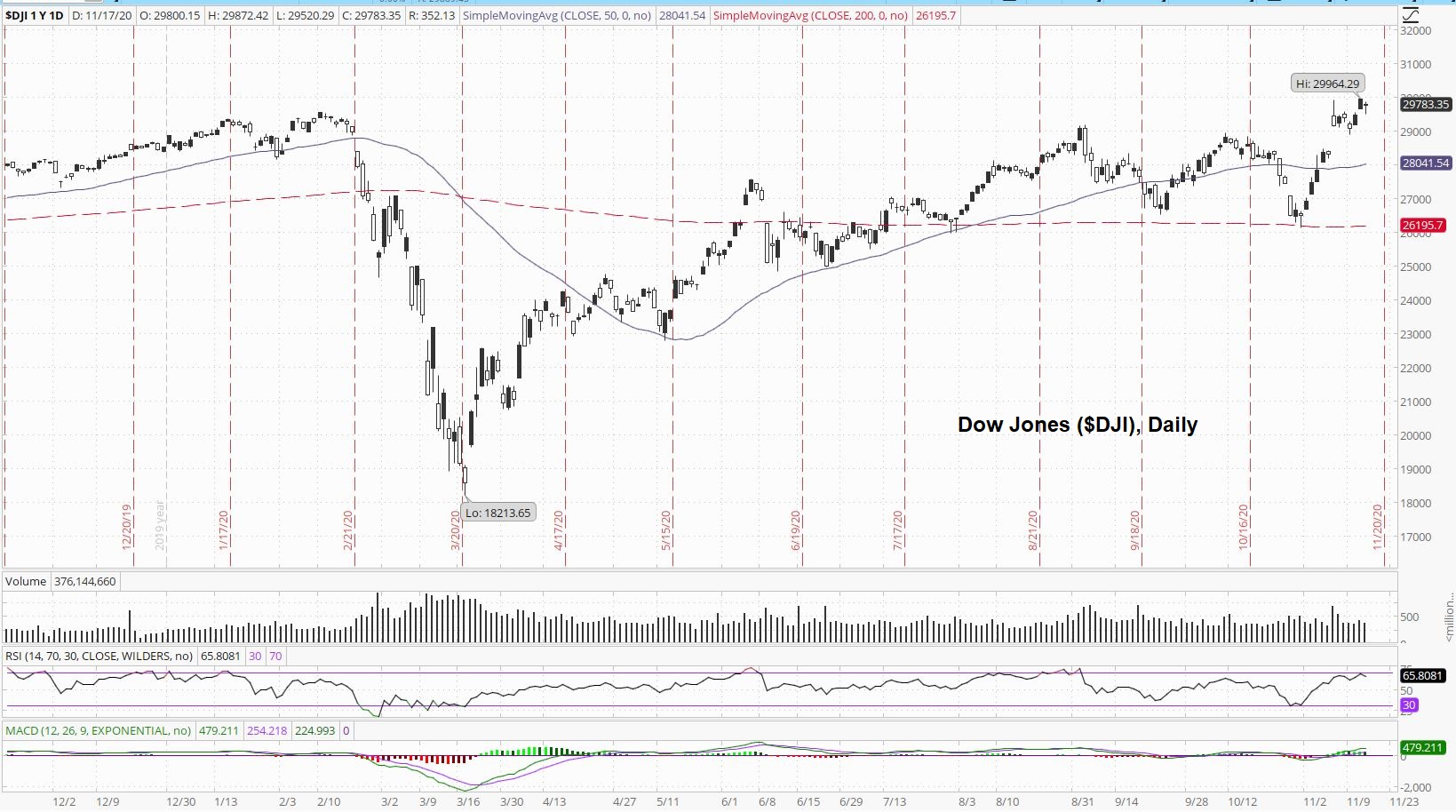 If the fear gauge is any indicator, it could be a breakout: 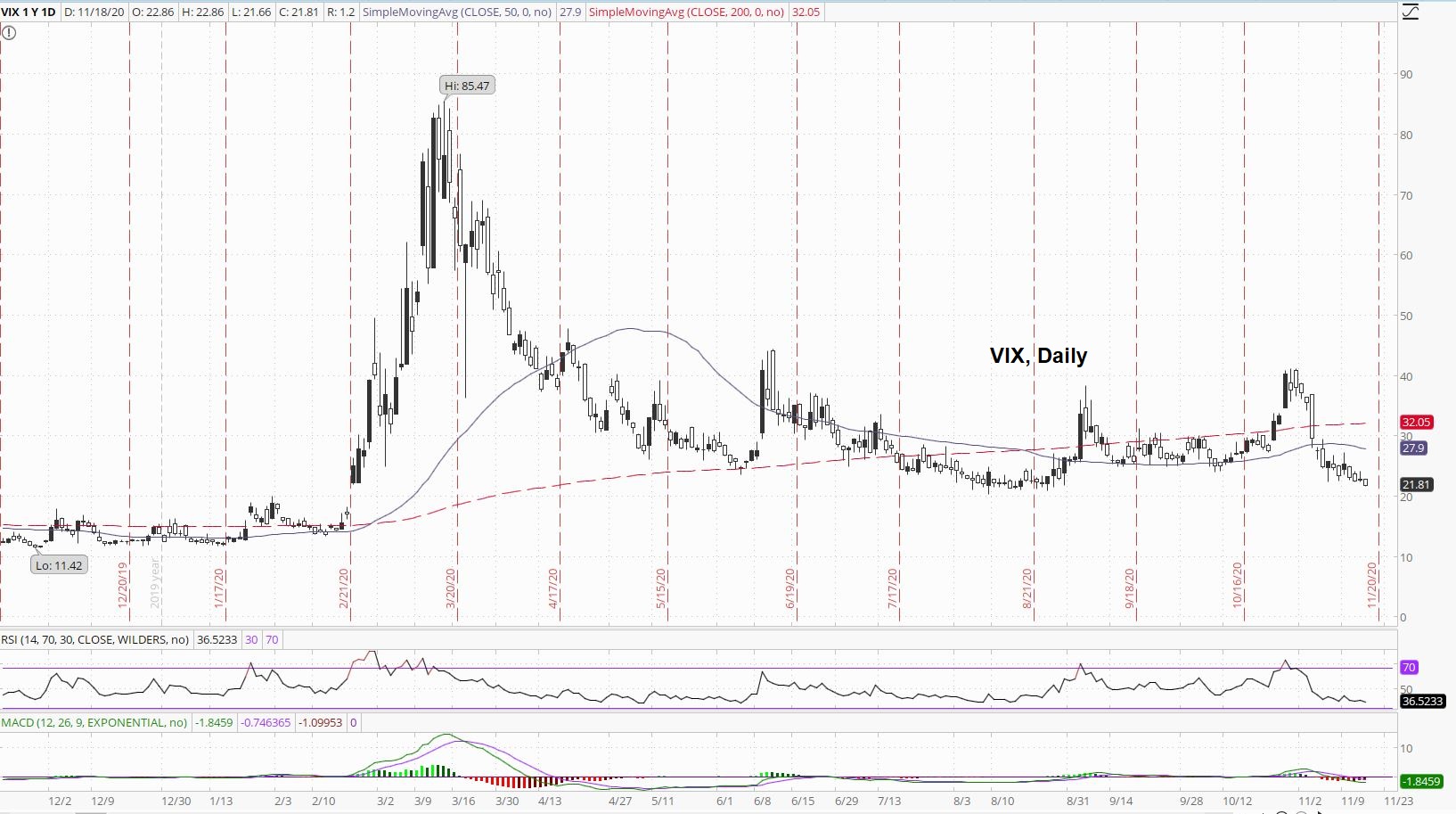 Of the three fundamental factors I mentioned above, if one of them turns out to be "bad for stocks", we could see a spiking VIX with little to no warning.

The yield on the 10-Year Note has come down somewhat: 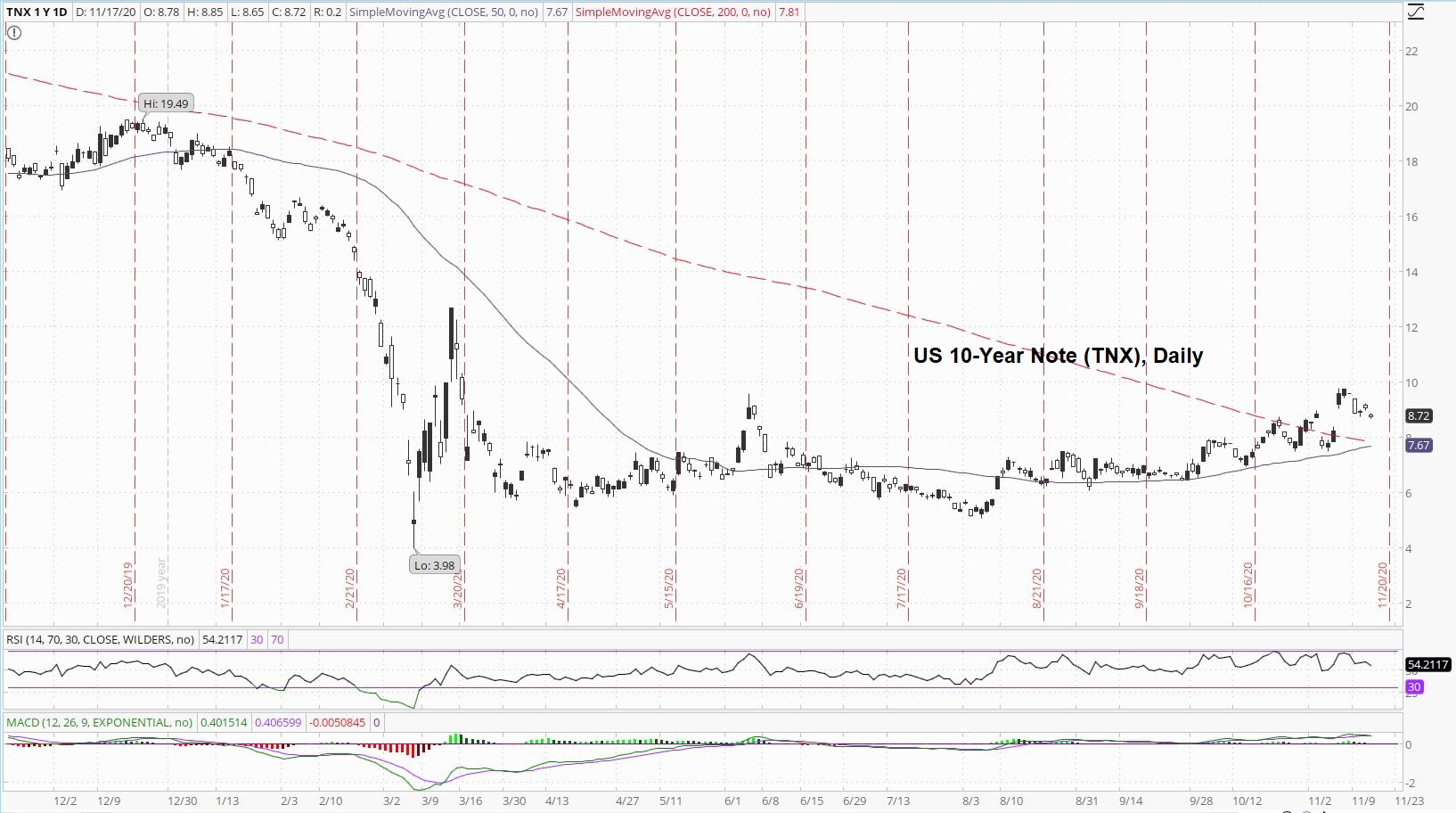 In my opinion, the Fed will not let interest rates rise in any meaningful way, and the pressure will continue to be to the downside on yield.

Of course, this comes at a cost to the US dollar: 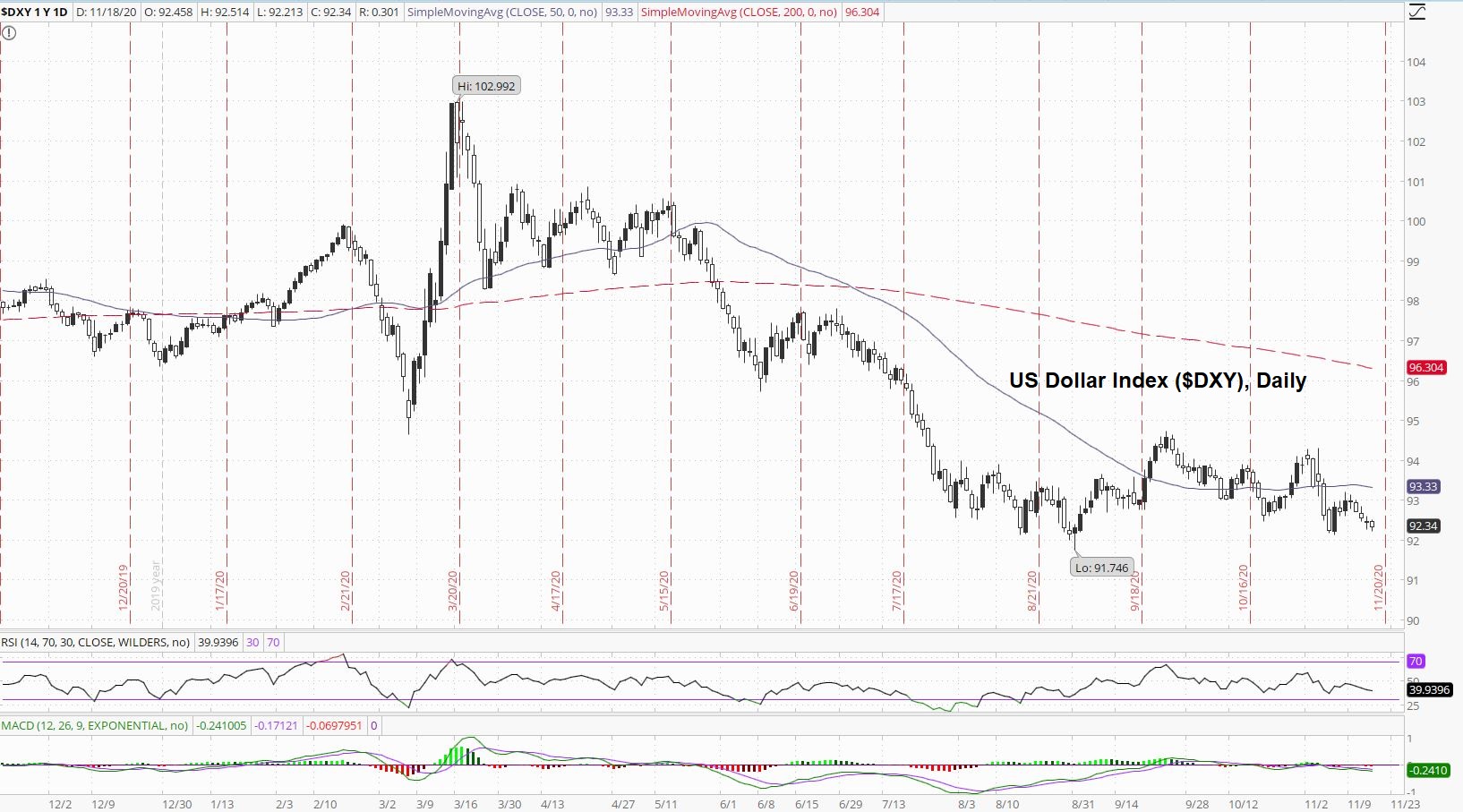 And to think, prices have begun rising at the consumer level, and the US dollar hasn't even plummeted, yet.

Copper is showing us that not only are consumer prices rising, but prices are rising in general: 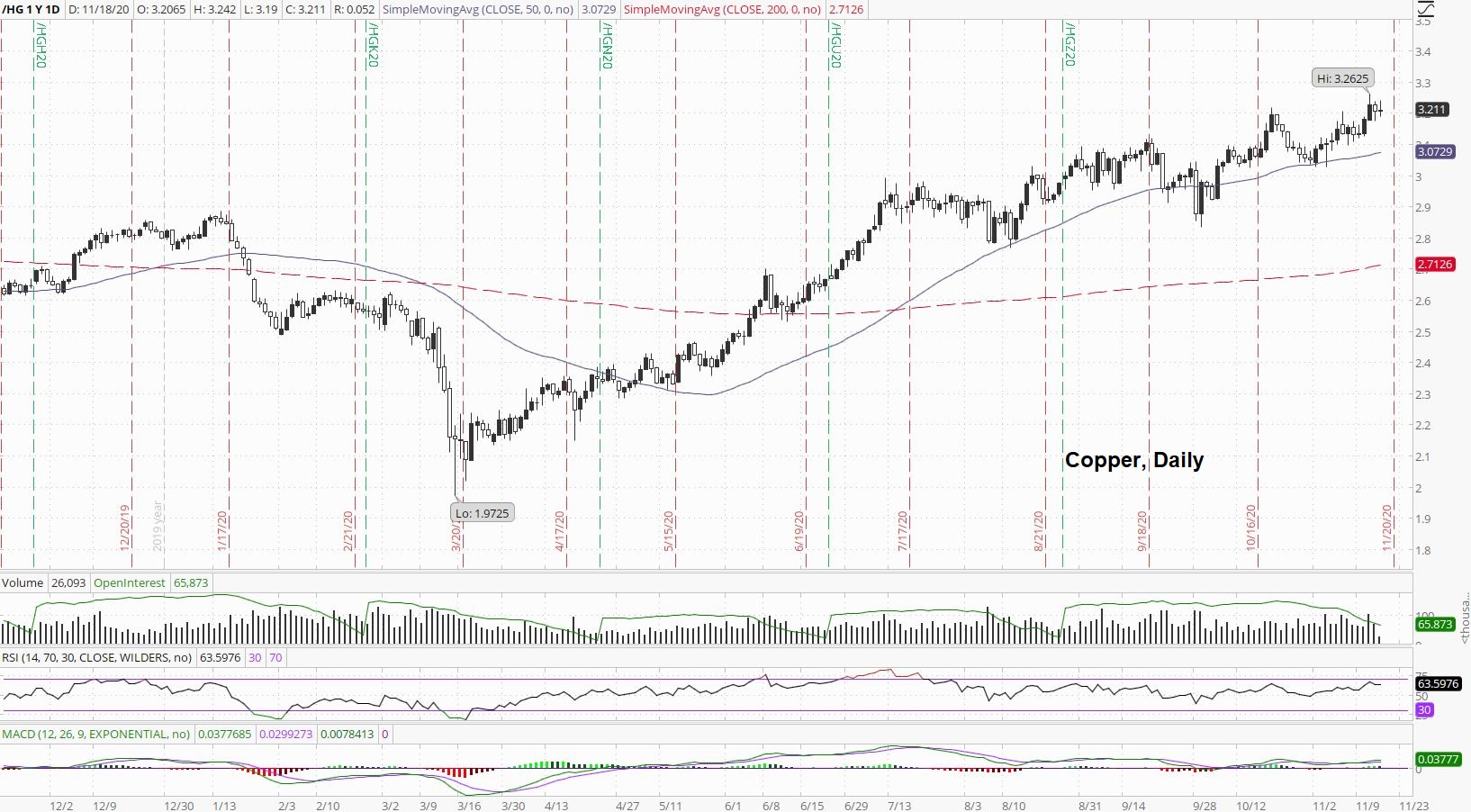 I'm not really sure the people are prepared for the inflationary fires that are already burning and now dreaming of Californication?

Even crude oil is rising in price: 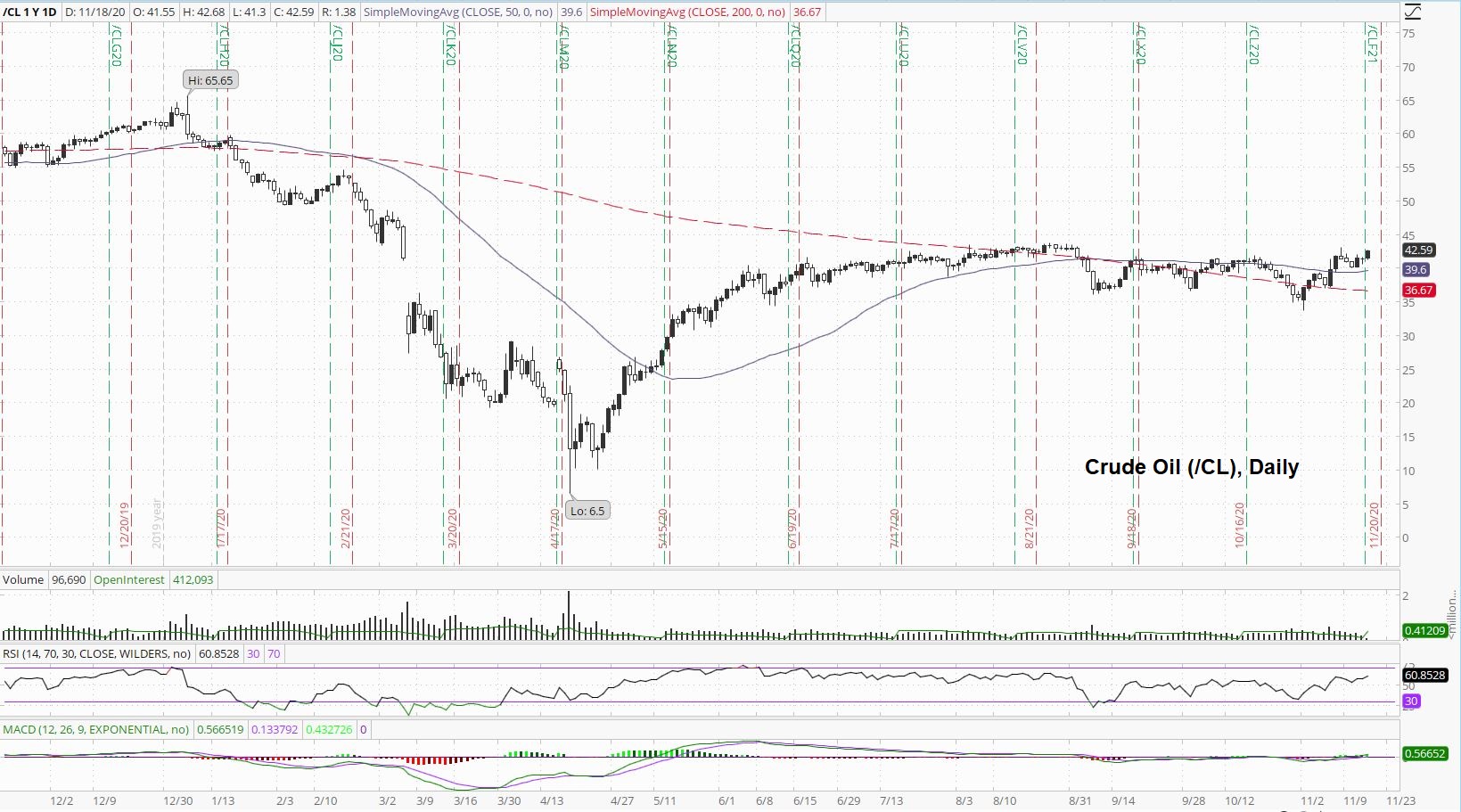 Since there is a finite amount of crude oil that can be stored above ground, is the price of crude oil telling us we've reached the point where all printing up all of this funny money, this unbacked, debt-based fiat currency dependent on exponential, unsustainable growth, matters?

That said, I really don't think platinum stays in the red, year-to-date, for much longer: 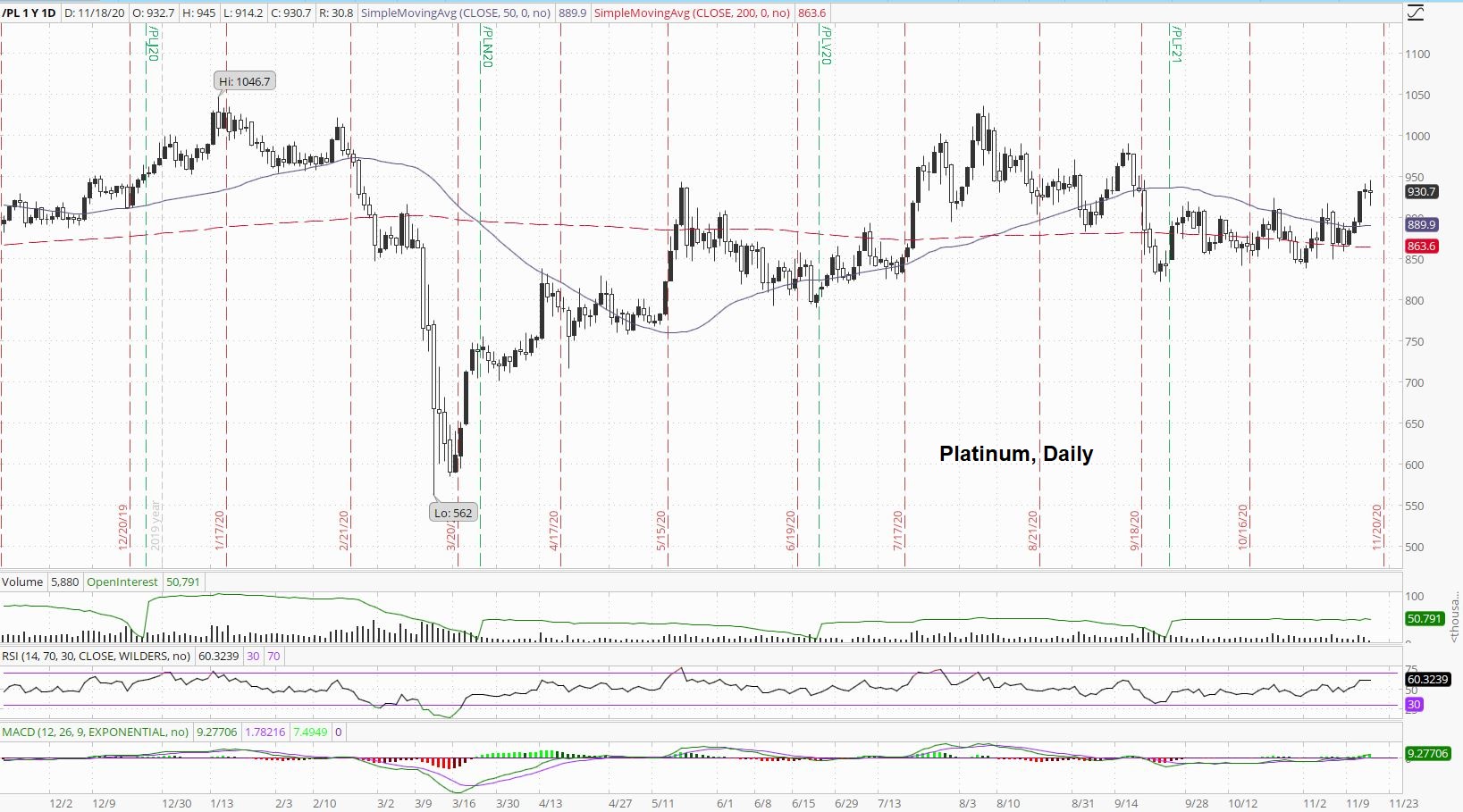 Yes, all things considered, the year 2020 most of all, I've been saying that about platinum for quite some time now, but in my opinion, the longer we stay in the red, amidst all of the other things going on in the markets and the economy, the faster and more explosive the upside move will be.

Of all the markets out there, I would expect palladium to mark time the longest: 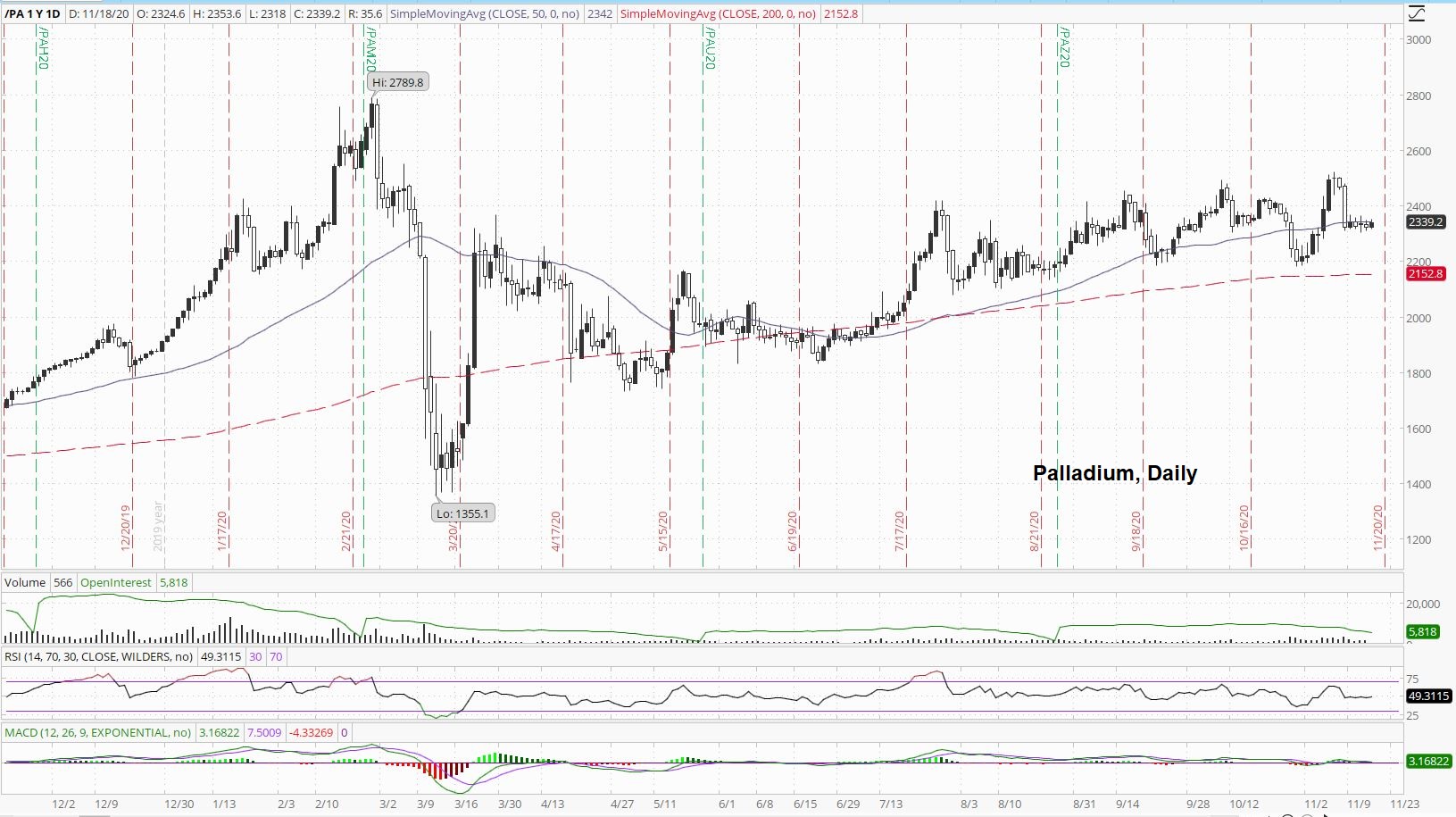 Of course, palladium meets all the requirements to be money too, so as gold, platinum, and silver move closer to parity with palladium, palladium will catch that flight to quality bid just the same.

The gold-to-silver ratio is still in the mid-upper 70s: 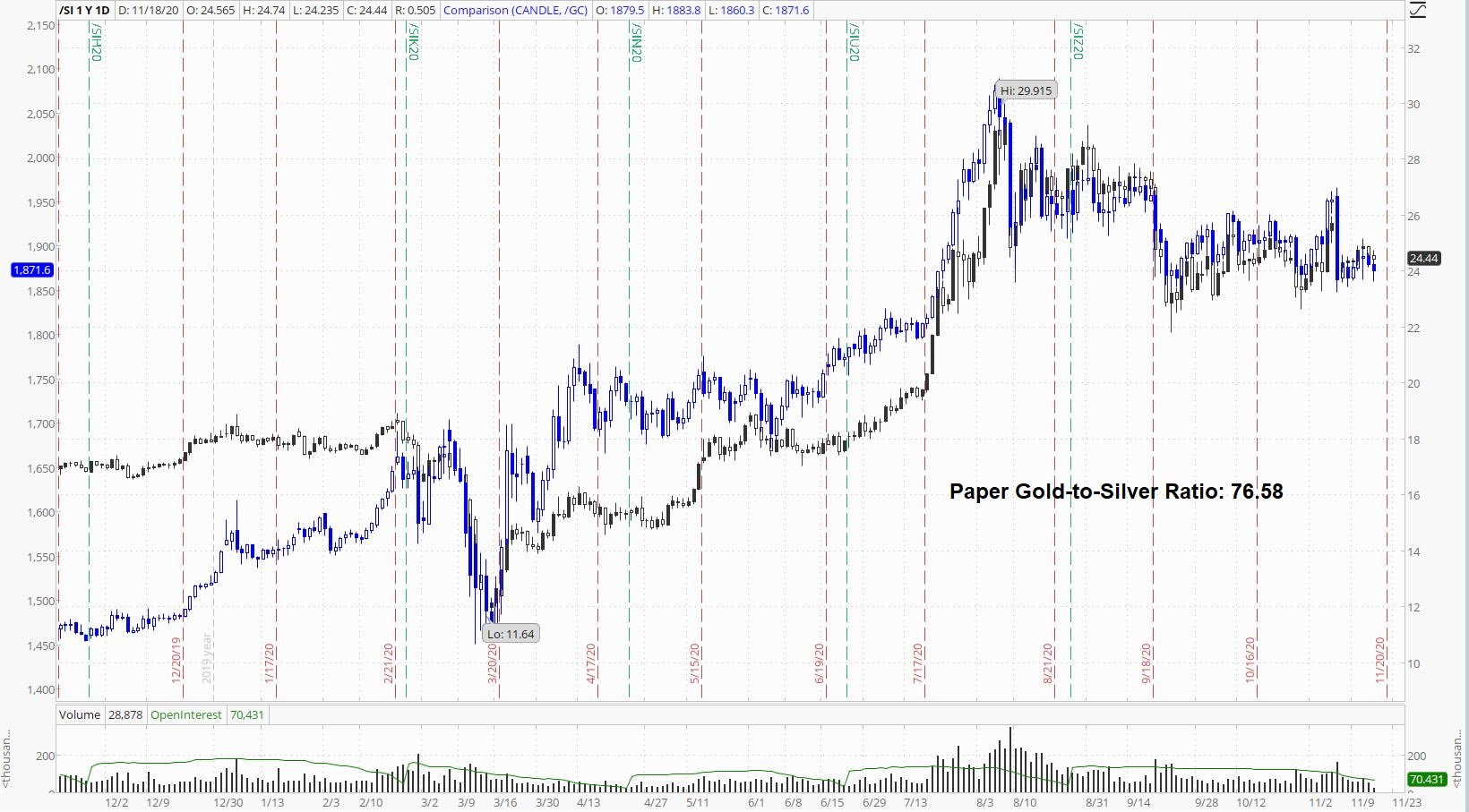 We have been marching in place for quite some time now, haven't we?

The permabears point to the (albeit inconsistent) series of lower-highs and lower lows on gold's daily chart: 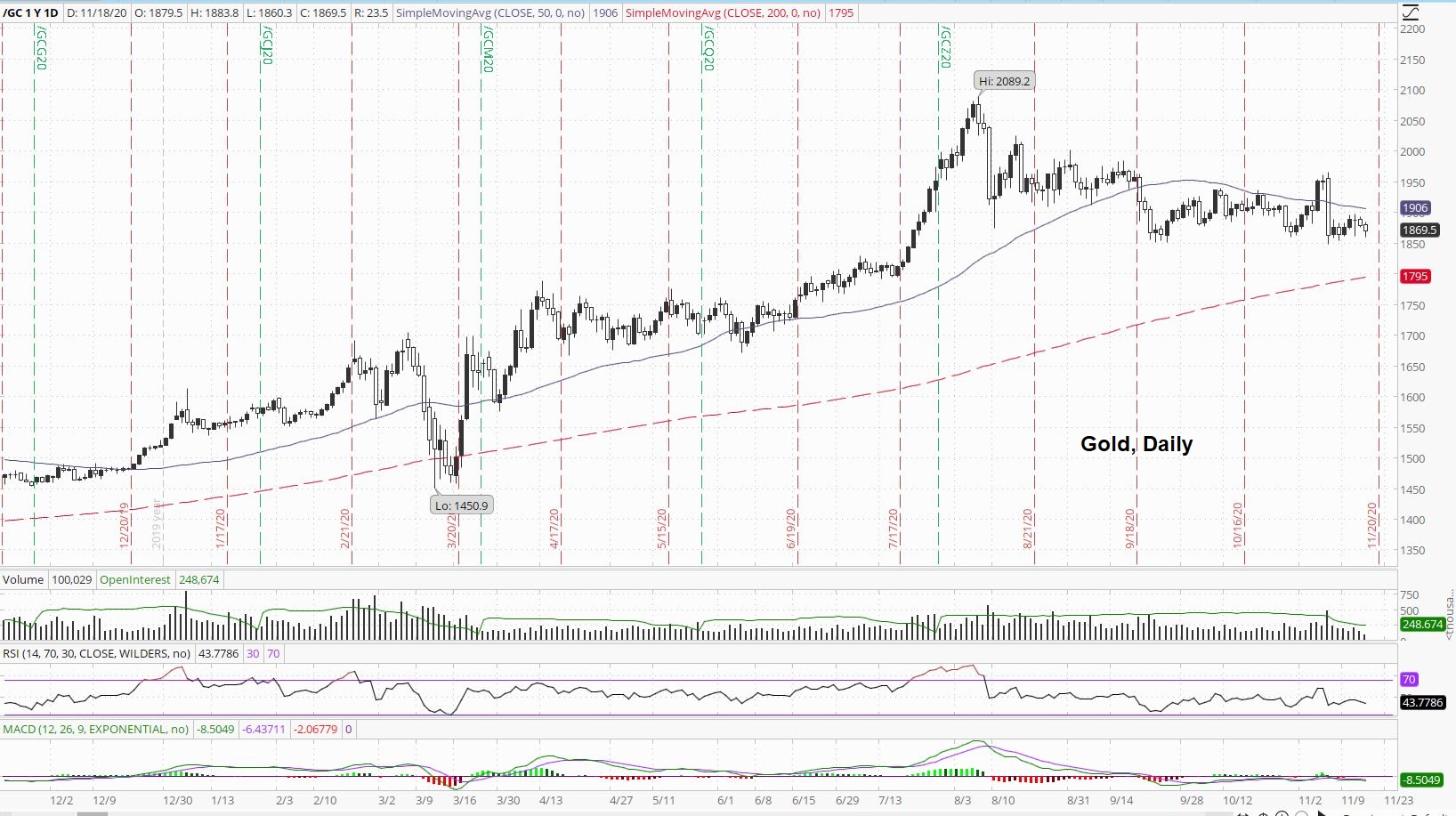 Short-term tendencies can change in the blink of an eye, however, and I think that is exactly what we're going to see. 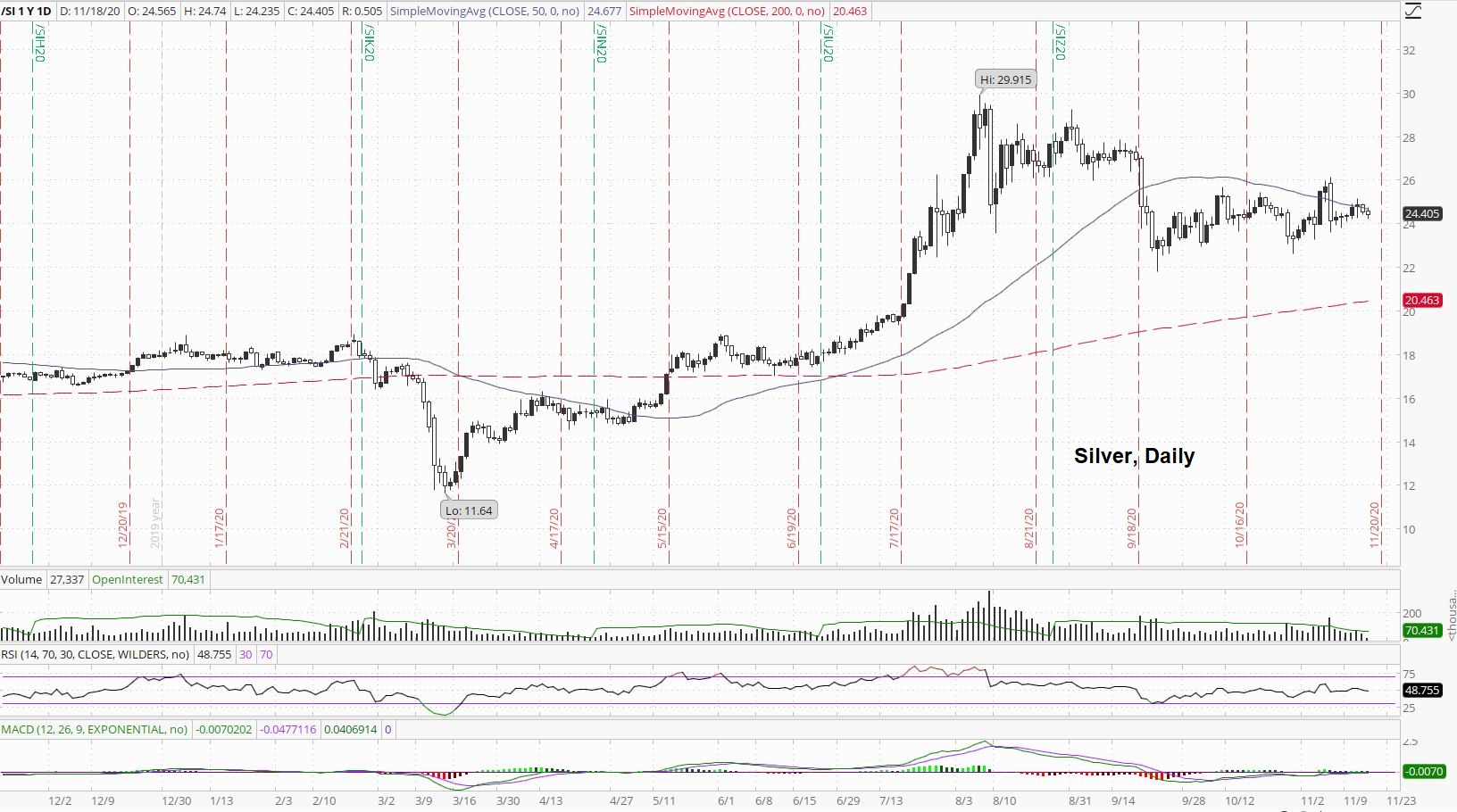 In my opinion, silver is not breaking down much below where it already has broken down because the fundamentals are simply too strong.