Political uncertainty and allegations of election fraud have now hit the still contested 2020 US Presidential election.

While there are claims that we may know the winner by the end of this week, judging by the way things have played out this week.

It looks like election results will be contested in the courts and decisions could drag on for weeks to come before the American people and the world know the final confirmed results of this presidential election.

The spot prices for silver and gold rallied to end this week. The gold-silver ratio has dipped back into the high 70s.

The Fed began their statement by highlighting the viral crisis still ongoing, and by the looks of the latest data, increasing to record new case volumes as we head into the North American winter season.

The Fed mentioned they are aiming to achieve inflation moderately above 2 percent for some time to come to make up for the supposed disinflation we have had in recent years. 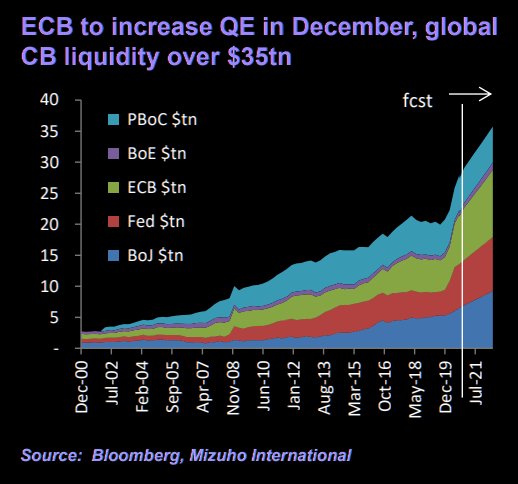 Central banks around the world are buying assets by simply drawing trillions in fiat currency out of thin air, not only will that not stop anytime soon. It is likely to accelerate in the years upcoming.

Of course, the financial powers are going to continue nominally propping up asset values. Today bond billionaire trader and silver bullion bull, Scott Minerd had the following reaction to the Federal Reserve's begging of Congress for more fiscal stimulus.

This past week on Twitter, the US Mint celebrated the 55th anniversary of when the Republic of United States of America began violating Article I, Section 10 of the United States Constitution, by making clad cuprous nickel coins tender in payment of debts.

Next year will be the 50th anniversary of the Unconstitutional full fiat Federal Reserve note currency.

We can have a brief look back at the collapse of the Roman Empire, knowing there is a direct correlation between debased currencies and fading empires.

We're simply doing this at a faster rate with enhanced technology helping to mask the destructive results to our collective culture and citizenry.

Of course, infinite QE and further stimulus will come regardless of who wins ultimately. But we end this week, looking as silver under the assumption that the Democratic Party is able to win the Executive branch starting in 2021.

The Biden camp has infrastructure spending plans under what they call their New Green Deal. The potential of some 500 million solar panels being manufactured and built in the USA alone in the coming years. That amounts to over 300 million ounces of silver for potential US solar panel demand alone.

Regardless of whichever candidate wins, a coming monetary crisis and fiat Federal Reserve note devaluation remain on our collective path, where a simultaneous vastly increased store of value demand for silver is going to cause industrial silver users to have to scramble for shrinking supplies.

All we collectively bid the silver spot prices and gold spot prices higher in the next four years upcoming.

That's it for this week, stay safe out there. Take great of yourselves and those you love.