Gold & silver continue to maintain while turmoil appears to be coming back into the markets...

The price of crude oil has crashed.

Earlier this week, the price for many different types of crude oil turned deeply negative.

This headline from a popular financial news website captures the mayhem in the markets:

Here’s a look at the price of crude oil today, showing the June contract: 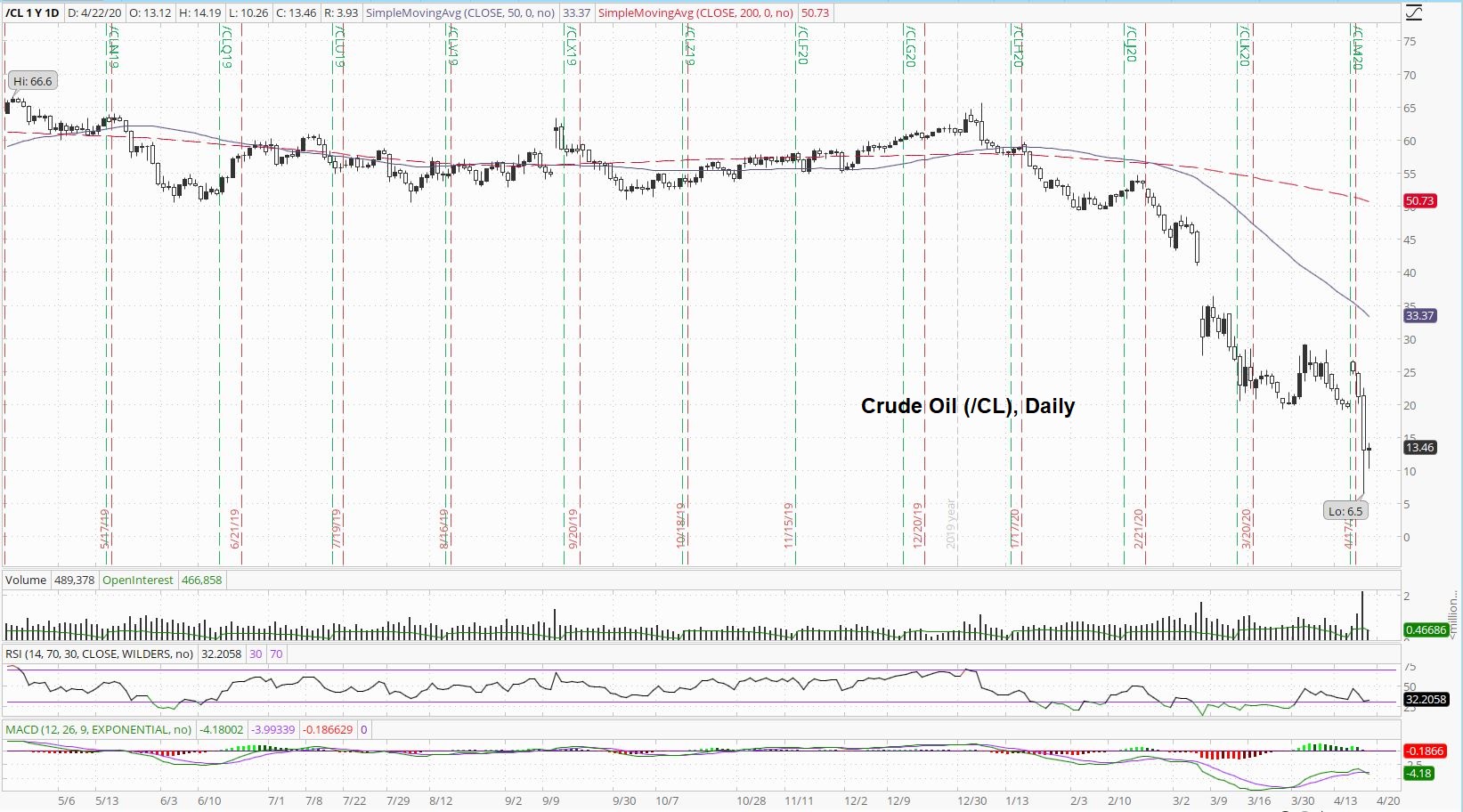 Price has plunged deep into the single digits.

Several years ago, the world was introduced to negative interest rates for the first time, but now, we have negative prices for commodities?

Here's a summary of what may be the main problem in the crude oil markets right now: We have markets that are highly financialized and very complex at the same time we have the basic fundamentals of the physical markets undergoing two abrupt shocks.

What are those two shocks?

The collapse in demand for crude oil and the over-supply of crude oil, which has has nearly filled global storage to the brim.

As such, in the same sense that the coronavirus pandemic has been an absolute shock to the global economy, the global crude oil markets have felt the sheer brute force of the pandemic head on.

The price of copper has dropped, but not necessarily crashed: 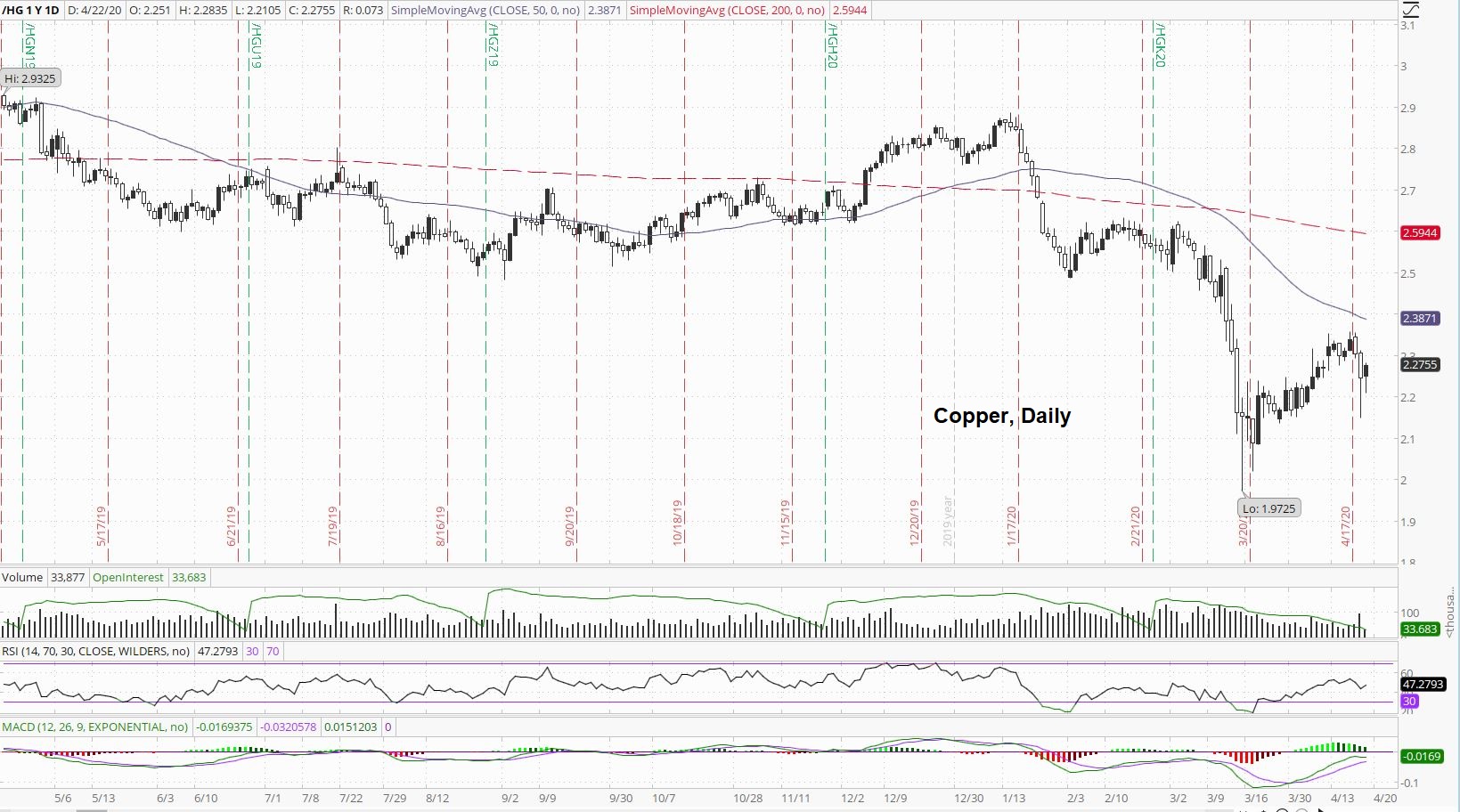 Of course, it is possible to store as much copper as one so desires above ground, whereas one can only store so much crude oil, so could we say there may be a price floor somewhere in other physical commodities?

Palladium has fallen from its 50-day moving average and dropped to its 200: 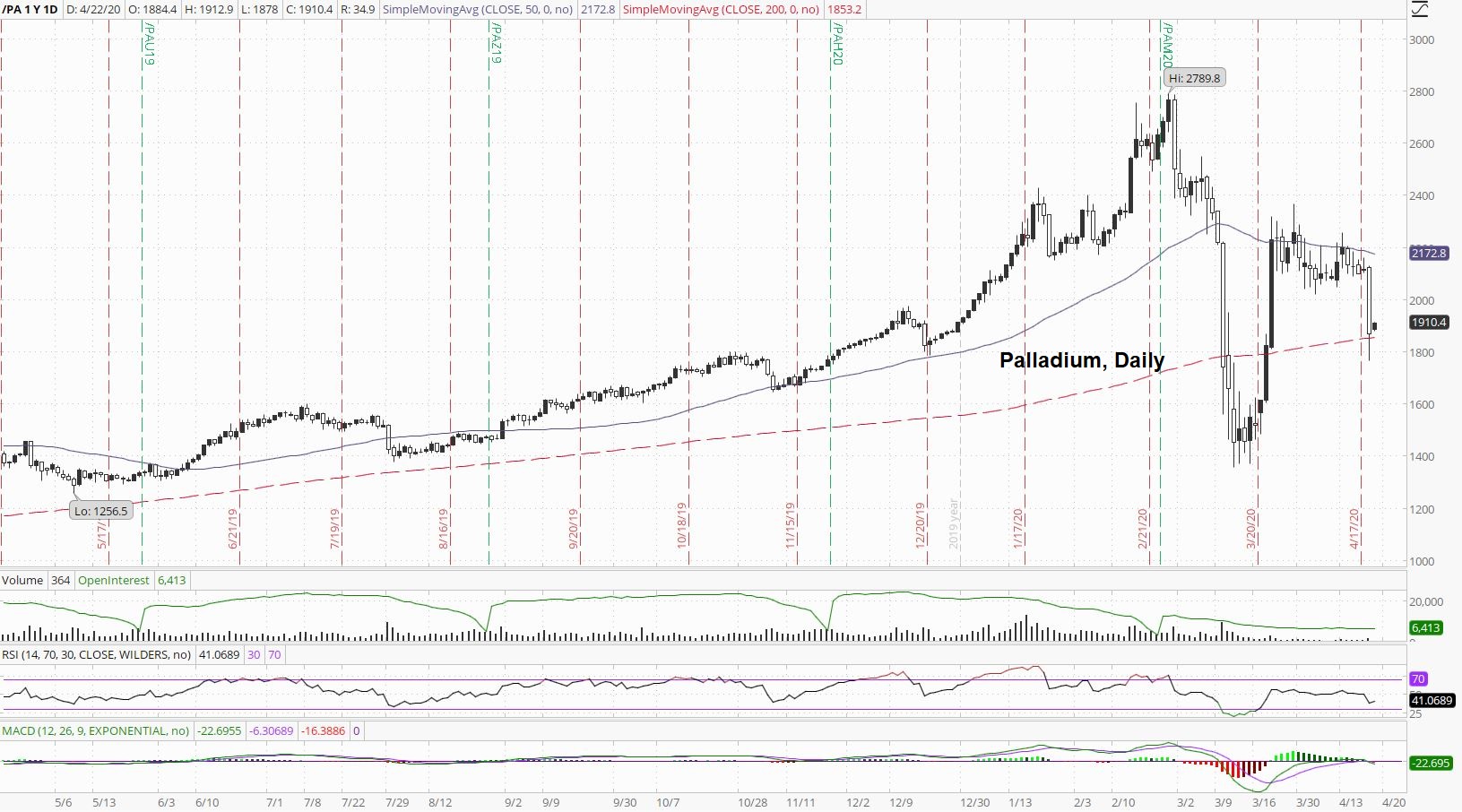 Palladium is down about 10% from just a couple of days ago.

The platinum price is fading further from its 50-day moving average, but has not crashed: 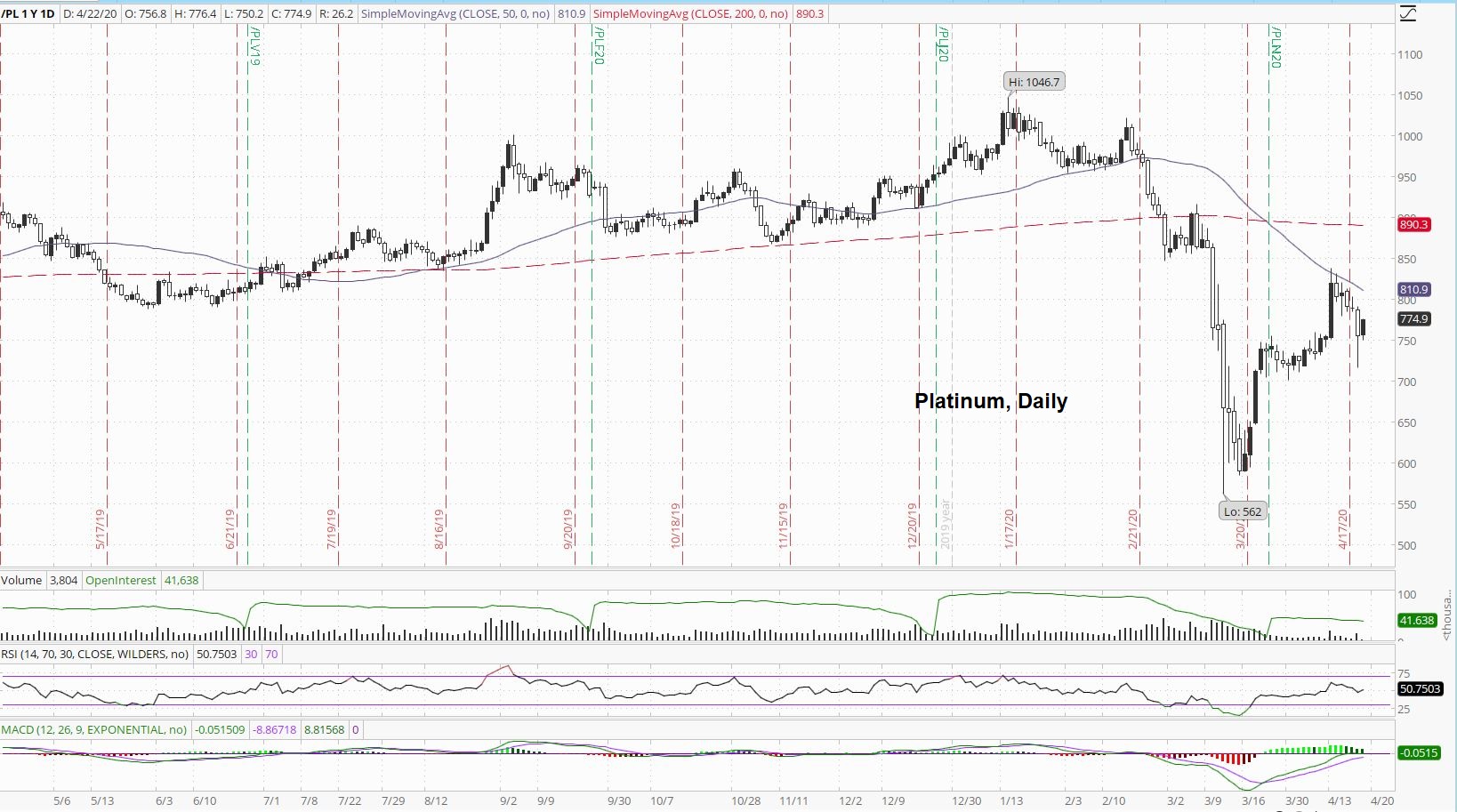 One could even make the case for support at $750.

The paper gold-to-silver ratio has crept back-up to above 113: 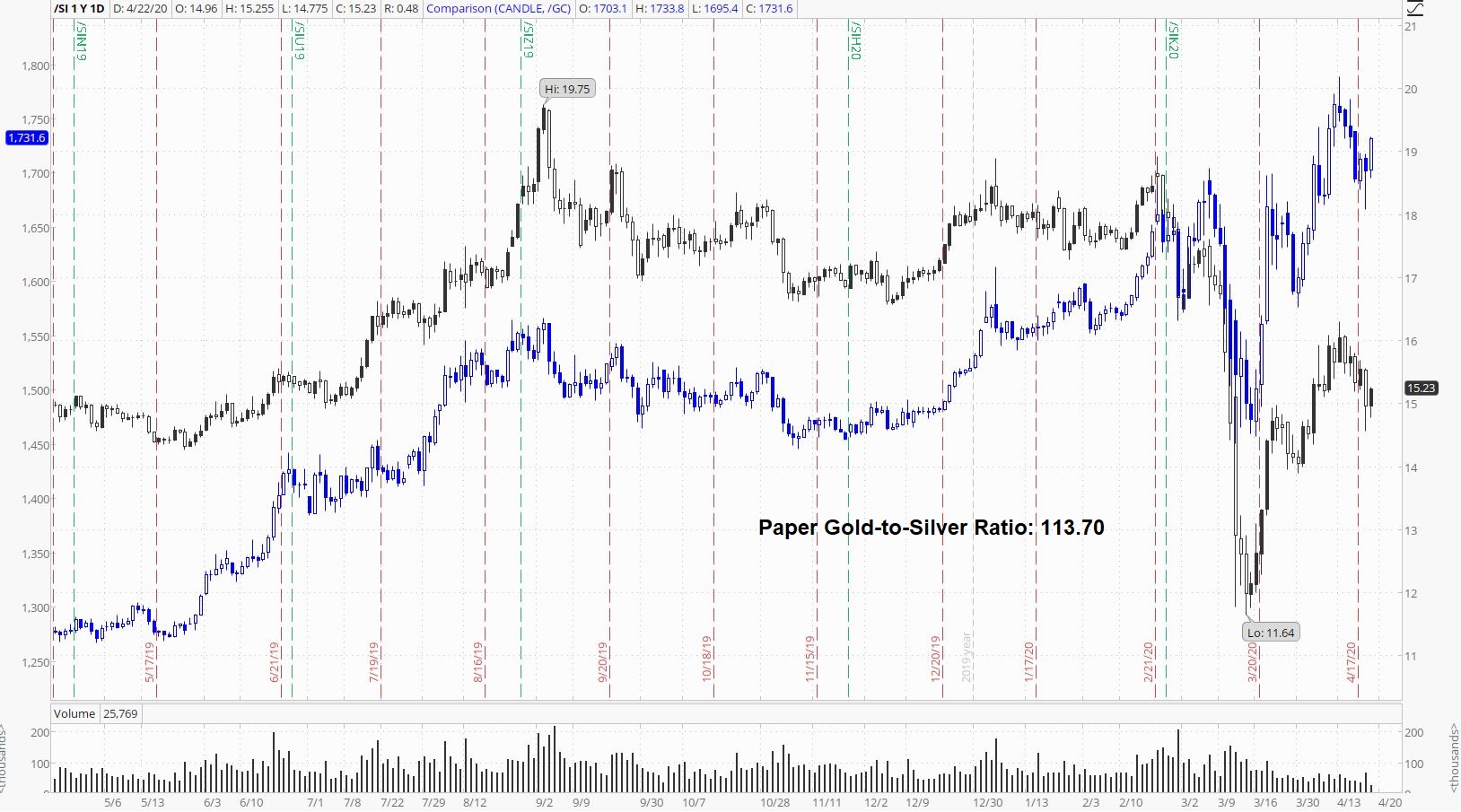 Recall that we've been watching the GSR basically rangebound in a sideways choppy channel between, call it 110 to 115, for for quite some time.

Like platinum, the price of silver is fading further from its 50-day moving average: 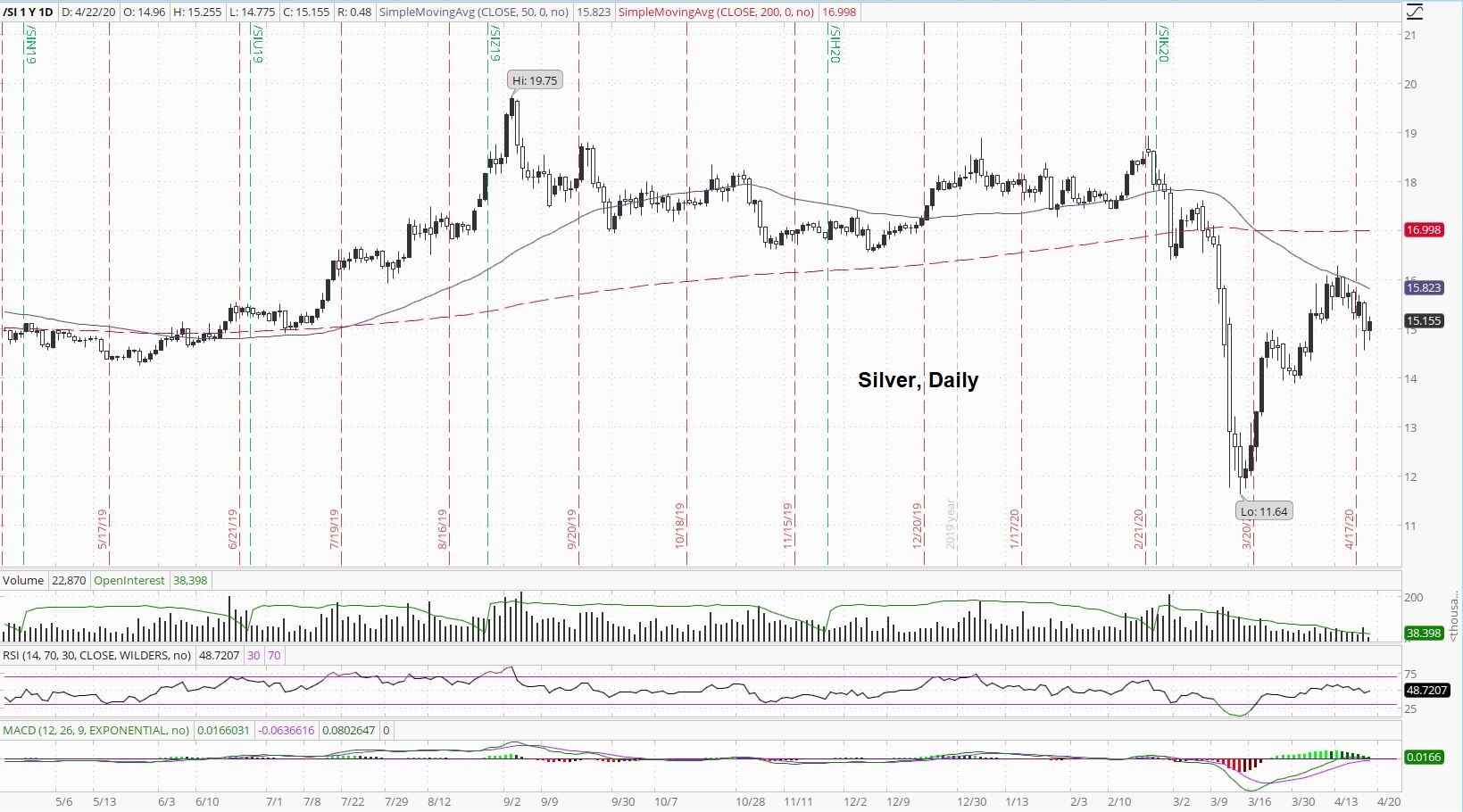 Is silver looking for some good old-fashioned whole number support?

Gold prices seem to have found whole number support at $1700: 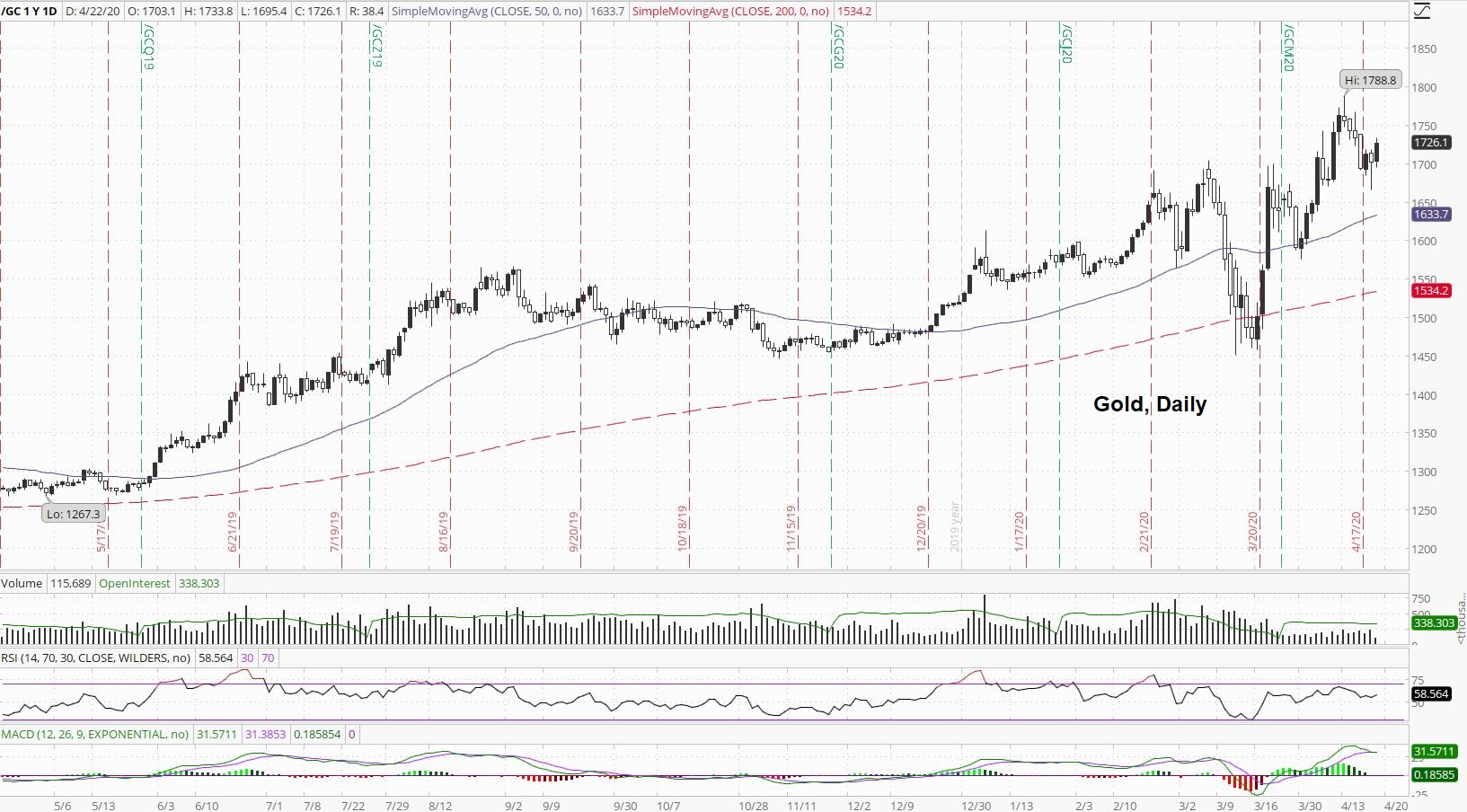 Gold has been bid througout, and in my opinion, gold will continue to remain bid as the economic numbers on Main Street continue to deteriorate.

As it pertains to the stock market, the VIX hasn't gone bonkers: 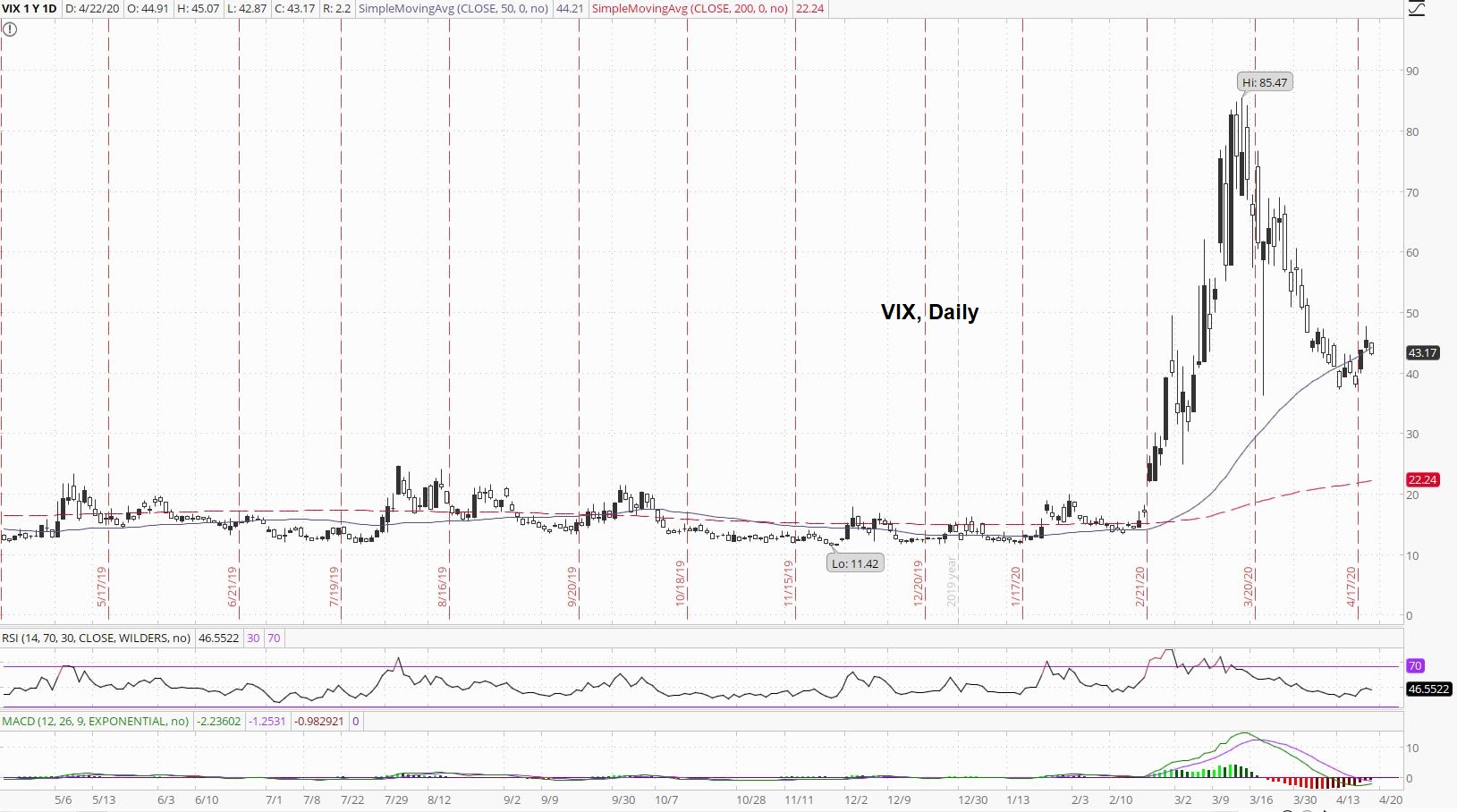 Of course, it's not yet understood what kind of market contagion the deeply negative crude oil prices will have in other areas.

Speaking of the stock market, in this instance the Dow, we're down about 1000 points in the last couple of days: 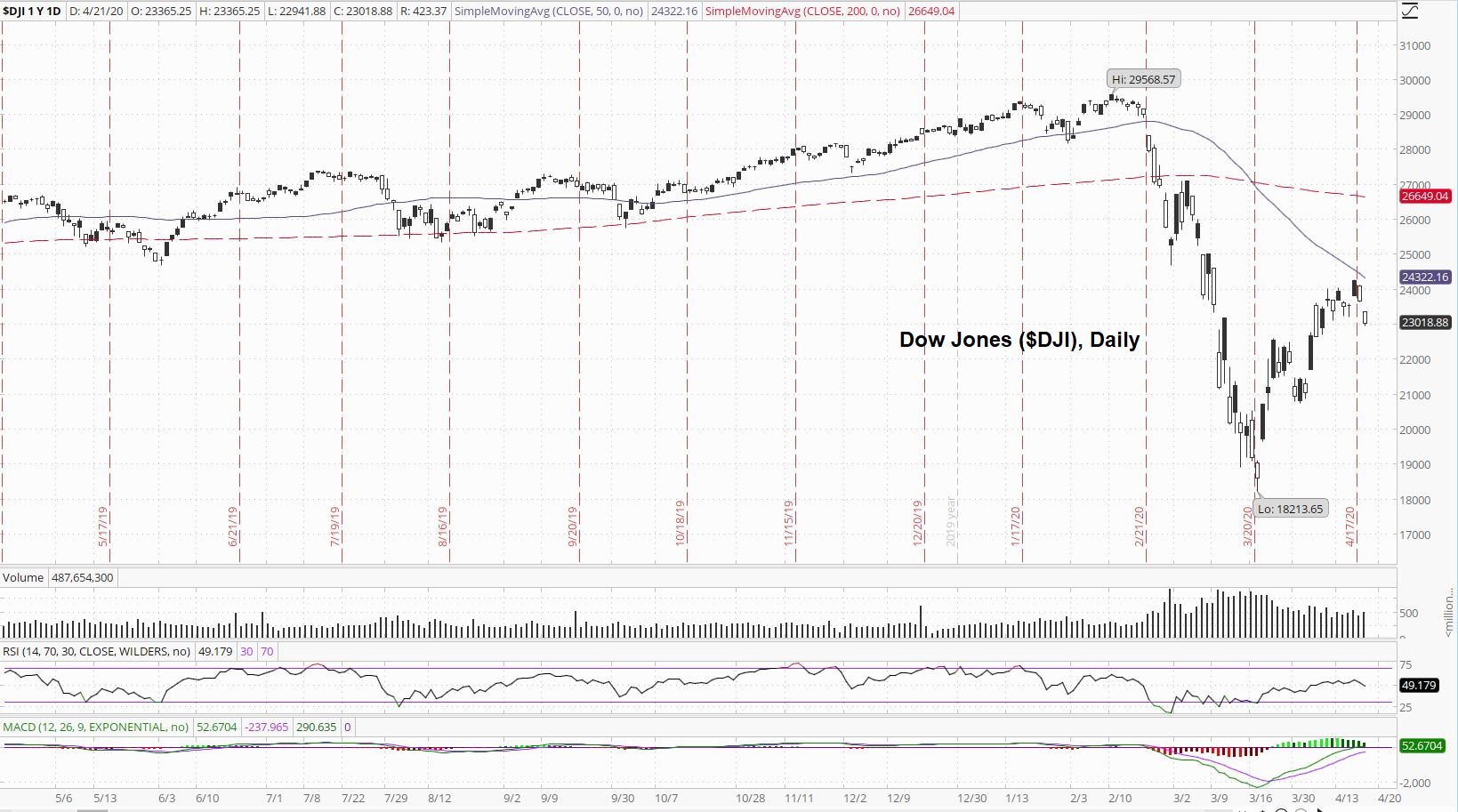 The bulls and the bears alike are both probably equally nervous as to where the market heads next.

One thing that hasn't really been moving is yield on the 10-Year Note: 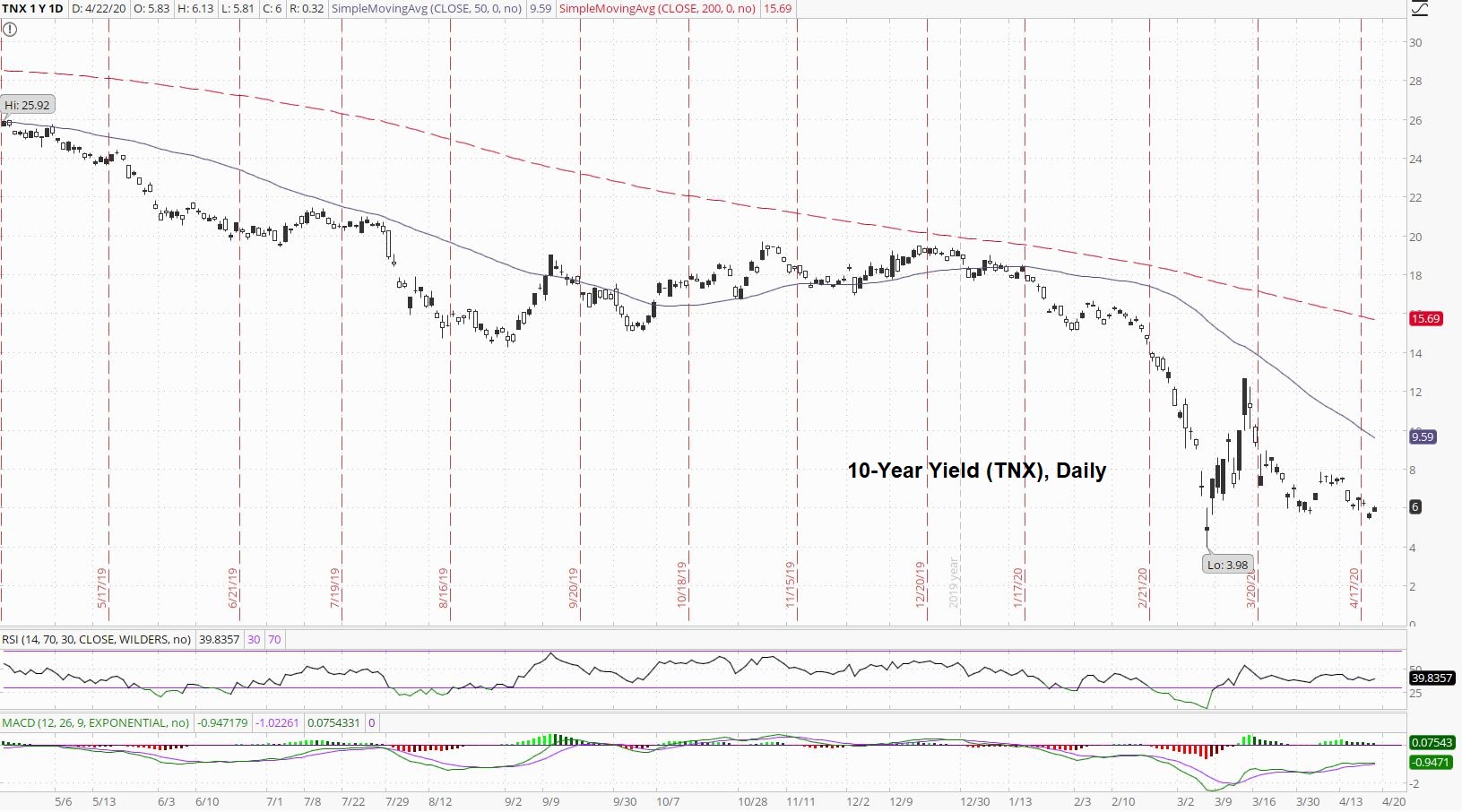 Yield for 10-Year US Government paper is currently perched at 0.6%.

Although volatile and with big swings, the US Dollar Index is still basically sitting at 100: 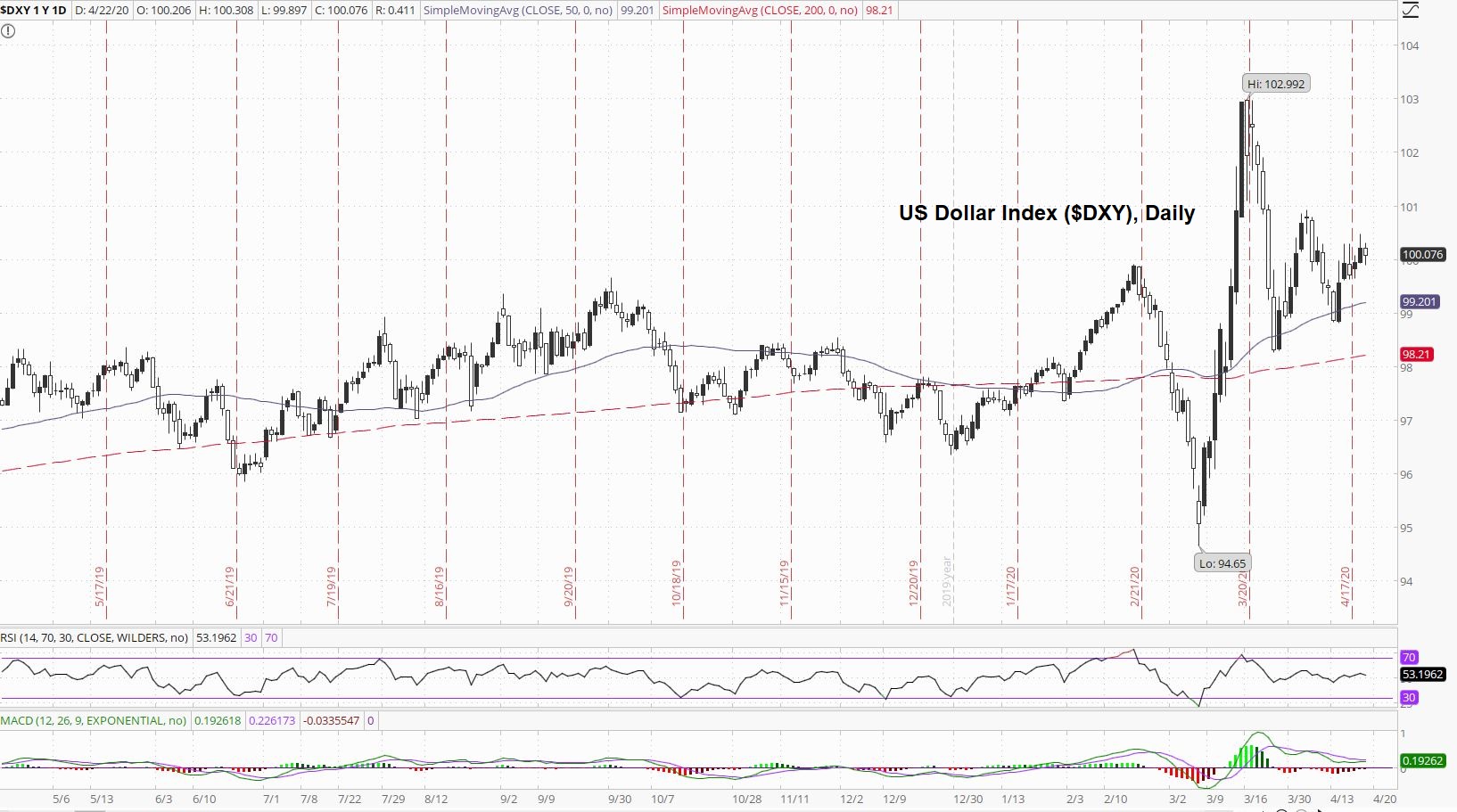 Is 100 about as good as it gets for the US dollar?