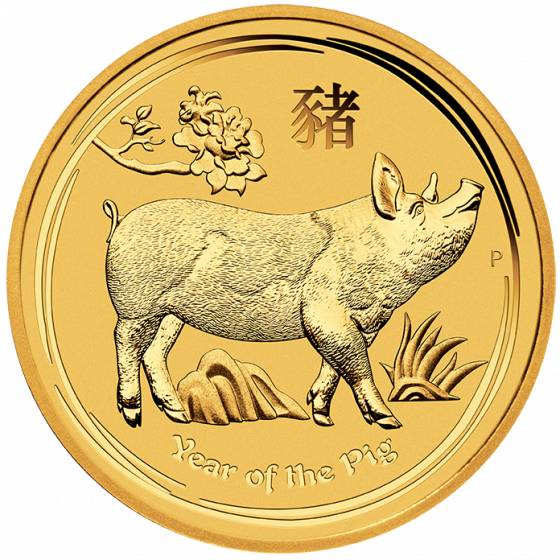 NOW SOLD OUT AT THE MINT!

Perth Mint launches the final set of coins under the 12-coin Lunar Series II Gold Coin Program, which started as a tribute to the famed Chinese Lunar Calendar and zodiac. These 2019 1 oz Australian Lunar Year of the Pig Gold Coins feature the image of an adorable pig as a way to usher in the Year of the Pig, or as we know it, 2019.

Although Perth Mint was originally established as a branch of the Royal Mint in London, it is one of the most trusted sources of Australian-backed bullion coins in the world. Today, the mint is counted among an elite group of mints throughout the globe whose products’ purity, quality, and artistry are beyond reproach.

Each of these coins contains 1 troy ounce of 0.9999 pure gold. Moreover, they are backed by the Australian Government, which has assigned them legal tender status with face values of $100 (AUD) each.

Those born in the Year of the Pig are believed to have an easy-going and calm, yet sincere and loyal personality that makes them unique. The animal ruling the year 2019 in the Chinese Zodiac is rendered on the reverses of these gold coins -- making them an elegant way of celebrating the Chinese Lunar Calendar while completing your Perth Mint Lunar Series sets.

On the other hand, the obverses feature Ian Rank-Broadley's version of Queen Elizabeth II's portrait -- as is common on a lot of circulating currency in Australia. This not only reinforces the fact that these coins are backed by the Australian government, but it also makes the product look more official and elegant.

Add these 2019 1 oz Australian Lunar Year of the Pig Gold Coins to your coin collections and complete your sets of the 12-year Lunar Series II Coin Program. As always, they add a healthy weight of 0.9999 pure gold to your precious metals portfolio while expanding your collection with gold coins struck by Perth Mint.