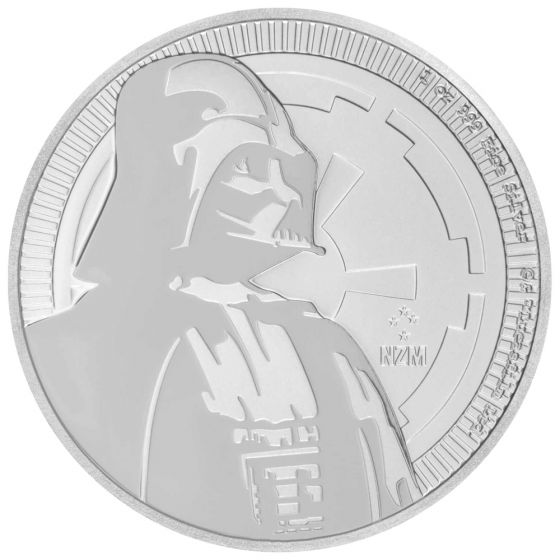 Featuring one of the most iconic characters from the popular Star Wars franchise, this 2017 1 oz Niue Darth Vader Silver Coin is another quality product from the New Zealand Mint. This coin is among the several Star Wars themed coins struck by the Mint.

Each of these 2017 Niue Darth Vader Silver Coins contains 1 troy ounce of 0.999 pure silver. Moreover, it bears a face value of $2 (NZD) guaranteed by the government of Niue.

The New Zealand Mint strikes these silver coins on behalf of Niue, a small island nation in the South Pacific Ocean. Although the Mint is a privately owned company in Auckland, it regularly strikes official silver bullion and gold bullion coins for sovereign governments, including Niue, Fiji, and many more.

Queen Elizabeth II’s famous portrait, rendered by artist Ian Rank-Broadley in 1998, graces the obverses of these coins. The artist successfully captures her regal pose in this right-profile image of the Queen. Furthermore, the issuing nation’s name ‘Niue,’ year of issue ‘2017,’ ‘the Queen’s name ‘Elizabeth II,’ and the face value ‘Two Dollars’ are imprinted around Her Majesty’s portrayal.

One of the most recognizable characters in the Star Wars series, Darth Vader, is featured on the reverses of these coins. He is depicted standing upright, looking forward intently with that all too familiar piercing glare from behind his mask.

This is the chance to expand your silver coin collection while collecting priceless Star Wars memorabilia. Moreover, the 0.999 pure silver content in these 1 oz 2017 Niue Darth Vader Silver Coins make them an excellent asset for bolstering your precious metals investments as well.