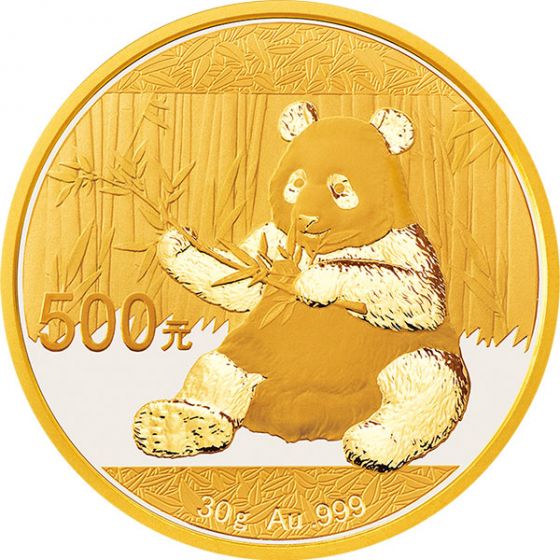 One of the few bullion Gold coins in the world that feature annually changing designs, the 2017 30 gram version of the Chinese Gold Panda coin is as exquisite to behold as its predecessors. Minted with the highest quality of Gold, all these coins have proven to be worthy purchases, not just in China, but all over the world.

Unlike mints in other countries, Chinese mints do not portray distinguishing marks on their products that allow people to ascertain the source of the coins.

Each of these particular Gold Panda coins contains 30g of pure Gold with a purity of 0.999. Moreover, they have the full backing of the Chinese government and are assigned a face value of 500 Yuan. In addition to this, every coin is in Brilliant Uncirculated (BU) condition.

The reverse of this coin features this year’s fresh design, a solitary Panda, holding and admiring a Bamboo shoot. It captures one of China’s iconic animals and the yearly changing designs make every one of these Panda designs as unique as the last.

Below this image, the purity and weight of the Gold is shown ‘30g Au .999’ and the coin’s face value is seen etched to the left of the image.

On the other hand, the obverse showcases the Hall of Prayer for Abundant Harvests in the Beijing Temple of Heaven. Above it, Chinese characters that mean – People’s Republic of China are seen imprinted, while the bottom of this side has the year of issue ‘2017.’

Annual design changes and multiple weight variants ensure that every version of this coin remains a highly attractive commodity in the precious metal market. Chinese Gold Panda coins have been around for over 2 decades and this release is sure to pique the interest of both Gold coin collectors who want to maintain a complete series of these coins and non-collectors who want to obtain a quality bullion product.