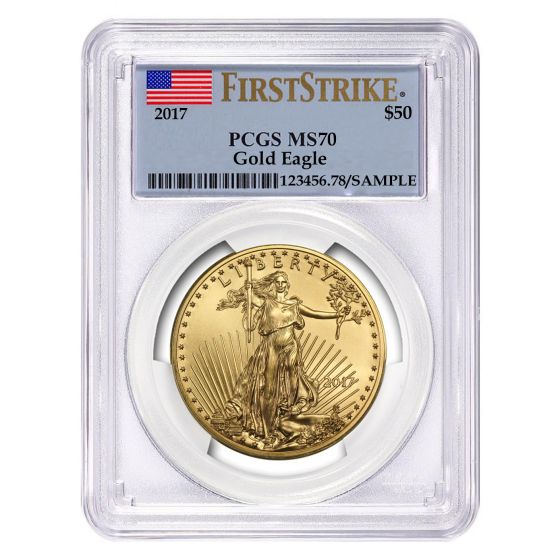 SD Bullion offers these 2017 PCGS MS-70 First Strike Silver Eagle coins at the lowest price in the industry, guaranteed. The American Gold eagle coin is the official gold bullion coin of the United States and this particular one has a perfect MS-70 certification from the Professional Coin Grading Service (PCGS). Additionally, it is assigned a First Strike designation as well, indicating these coins were one of the first to be minted that year.

The coins contain 1 troy oz. of actual gold content and have a face value of $50, fully backed by the United States government.

The United States Mint also produces proof and uncirculated versions for coin collectors. All Gold Eagles are produced at the West Point Mint in West Point, New York. The proof and uncirculated versions carry the mint's mark ("W") beneath the date. The facility, erected in 1937, primarily mints commemorative coins and gained official status as a branch of the United States Mint on March 31, 1988.

Founded in 1985, the PCGS has graded over 33 million coins valued at over $29 billion. The original PCGS grading system is still in use and widely accepted across the globe. Coins graded by the PCGS are placed in a PCGS holder that is made of clear inert plastic, which protects the coin and ensures the product stays intact.

The obverse of all 2017 1 oz. American Gold Eagle coins bears the image of Lady Liberty marching forth from Washington DC, with the US Capitol Building visible at her feet and the rays of the sun outlining her body from the background, as created by Augustus Saint-Gaudens.

On the reverse is a family of bald eagles in its nest. Created by Miley Busiek exclusively for use on the American Gold Eagle, it depicts a male eagle returning to the nest, which holds a group of hatchlings under the cautious eye of a female eagle. This is one of the most highly prized coins in the world, ideal for both collectors and non-collectors.