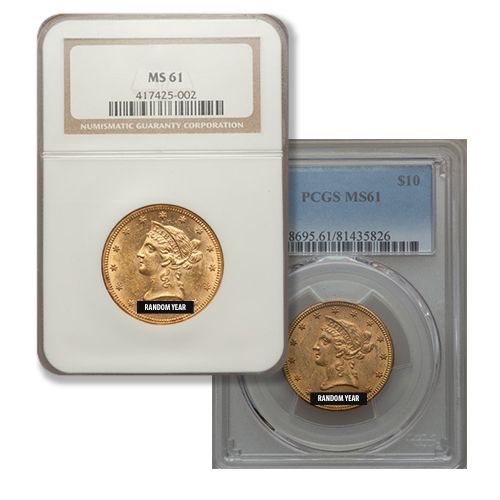 Bearing an MS-61 grade from either PCGS or NGC, these Random Year $10 Liberty Gold Eagle Coins are among the most famous gold coins struck by the United States Mint over a century ago.

PCGS is one of the oldest coin-grading agencies in the United States and was established in 1985. It is headquartered in Santa Ana, California. The sole aim of the seven dealers, including the current president of PCGS, David Hall, while setting up the agency was – providing more information about coins to the public, before they dip into their wallets.

Similarly, NGC, or the Numismatic Guaranty Corporation, was established in 1987. It began as a relatively small third-party coin-grading agency in Parsippany, New Jersey. However, over the past three decades, NGC has become one of the most respected and trusted coin-grading authorities in the world.

Each of these coins contains 0.48375 troy ounces of pure gold and bear a grade of MS-61 from either PCGS or NGC. Moreover, they're still official United States Coins with face values of $10.

Although an MS-61 grade is by no means the best out there, considering the age of these coins (over a century old), these particular Liberty Gold Eagle specimens are an ideal choice for those who want to strike a balance between its grade and price.

A classic rendition of Lady Liberty is imprinted on the obverses of these coins. Modeled after portrayals usually found on coins from the Greco-Roman era, this design features the left-profile of Lady Liberty with a crown atop her head. On the other hand, the reverse sides of these gold coins display the famed bald eagle clutching arrows and olive branches in its talons.

These Random Year MS-61 Liberty Gold Eagle Coins shipped to you could be struck in any year between 1838 to 1907 -- depending on our stocks at the time. Grab them for your collections and diversify your precious metals portfolios today.