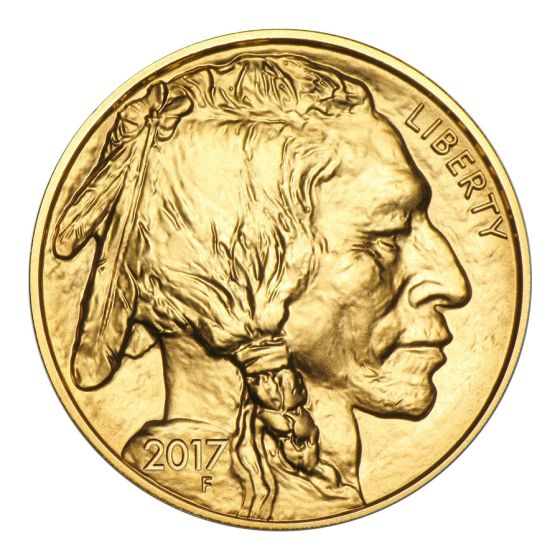 SD Bullion offers these 2017 American Buffalo gold coins at the lowest price in the industry, guaranteed. A product of one of the most well-known and respected mints in the world, this 1 oz American Gold Buffalo coin is the 2017 release of this renowned design by the United States Mint.

The United States Mint is known for its precious metal purity, fine artwork, and pristine minting capabilities – making all their products coveted assets for investors as well as collectors. Originally, the US Mint was set up in 1972, in the state of Philadelphia. Additionally, it is the sole producer of circulating coinage in the United States.

First introduced in 2006, the one ounce American Gold Buffalo Coin was the first Gold coin produced by the US Mint to be struck in fine 0.9999 pure Gold. Moreover, the infamous design on these coins is a tribute to the original designer, James Earle Fraser, who was responsible for this design on the popular Buffalo Nickel, also called the Indian Head Nickel in 1913.

Reportedly, Fraser, while discussing his inspiration for the design of this popular coin in 1947, said that he could not come up with a design that was more American than one that honors the proud Native American people and the sturdy American Buffalo. Born and brought up in Winona, Minnesota – Fraser grew up with similar imagery all around him, which prompted his direction for the design of this coin.

Each of these Gold coins are available in BU (Brilliant Uncirculated) condition and contains 1 troy ounce of 0.9999 pure Gold. Moreover, these coins carry a face value of $50, fully backed by the U.S Government.

Featuring Fraser’s rendition of a Native American chieftain on its obverse, this coin aims to celebrate the cultural diversity and inclusiveness of this great nation. Interestingly, the imagery is said to be the amalgamation of the headgear styles of 3 major Native American tribes. Additionally, it showcases the year of issue ‘2017’ at the bottom of this side of the coin.

On the other hand, the reverse of the coin portrays America’s most identifiable animal, the American Buffalo. This design is based on ‘Black Diamond,’ a Buffalo that was housed in the Central Park Zoo in New York City in the early twentieth century.

Considering the fact that they are struck in Gold of extremely fine purity, these coins have always been a popular option among investors who wish to diversify their investment portfolio with quality precious metal products from the US Mint. Moreover, collectors who wish to collect every release of this coin cannot miss the opportunity to snag the 2017 release of the American Buffalo Gold coin.