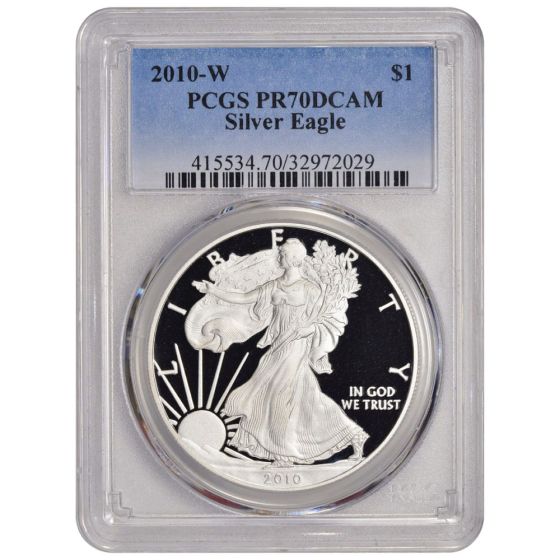 These PCGS-graded PR-70 Deep Cameo 2010-W American Silver Eagle Proof Coins are among the finest specimens released that year, bound to be highly valued by those who appreciate the intricate detail of the designs as well as the mirror-finished surface of the silver. The American Silver Eagle program was launched in 1986, and since then, the United States Mint has annually released bullion, BU, and proof variants of these coins.

Experts at PCGS assign perfect PR-70 Deep Cameo grades to only proof coins that are flawless, in the truest sense of the word. Coins certified by PCGS undergo an extensive evaluation, including inspection under 5X magnification, before being awarded the grades they deserve.

These 2010-W American Silver Eagle Proof coins display the familiar image of Lady Liberty, confidently walking towards the rising sun. In fact, this is one of the most popular designs to feature on American coinage, and is called the ‘Walking Liberty.’

Sealed in inert plastic slabs by PCGS and featuring beautiful blue labels that highlight the coin’s certifications, grades, and specifications, each of these 2010-W American Silver Eagle Proof Coins will make valuable additions to investment portfolios and coin collections.