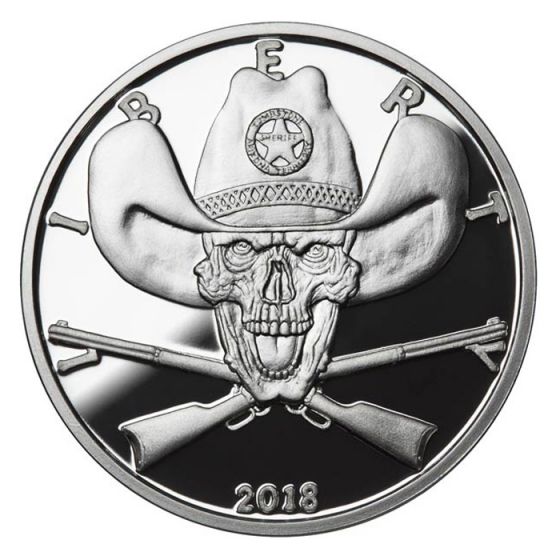 Osborne Mint is back with yet another unique coin offering, depicting a frightening take on the image of a Sheriff, with the 2018 American Western Skulls 1 oz Sheriff Silver Proof Rounds. Only the second release in this relatively new series, these rounds have a very limited mintage of just 2000.

The American Western Skulls Series was launched in 2017 to honor the Old West. This region's pistol-slinging times are all too well-known, not only in the USA, but also all over the world.

Each silver round is struck using 1 troy ounce of 0.999 pure silver.

Obverse sides of these rounds feature the startling image of a skull sporting a Sheriff's hat. Two guns are depicted crossed over one another -- completing the image with a very Jolly Roger-esque flourish.

On the other hand, the reverses imitate USA's circulating coinage. But for one eerie change. The familiar bald eagle is replaced by the skeleton of a bird, unfurling its wings behind a shield while clutching arrows and an olive branch in its talons.

Join the Osborne Mint and commemorate the Old West with 2018 American Western Skulls 1 oz Sheriff Silver Proofs. They will make fascinating additions to your silver collection - drawing the gaze of onlookers, while their pure silver content expands your precious metals holdings. Grab a frightening Sheriff before stocks run dry -- bound to happen soon due to its limited mintage of only 2000!

Specifications:
Diameter: 39mm
Mint: Osborne Mint
1 troy oz .999 fine silver
Total Mintage only 2,000
Each Coin is shipped in a plastic capsule and featuring a Number rimmed with a matching numbered Certificate of Authenticity