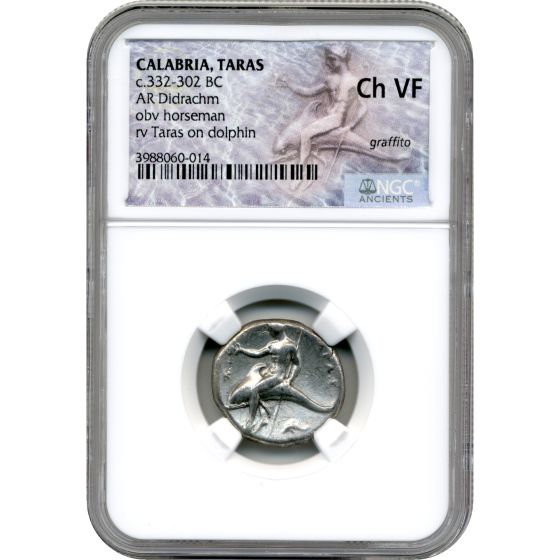 1 oz Silver Coins - Random Design
$31.90
Description
Ancient Coinage from the Ancient Roman and Greek era is extremely collectible. Hence, both collectors and investors actively seek graded specimens from that period due to their reliability, authenticity, and assessments by experts at grading agencies. These Calabria Taras AR Didrachm 332-302 BC silver coins are graded 'Ch VF' by NGC (Sheldon Scale: 30-35).

NGC (Numismatic Guaranty Corporation) is one of the most trusted coin grading authorities in the world. It was established in 1987 and has graded over 35 million coins to date. Over the past three decades, NGC has built a solid foundation of being a reliable and accurate grading agency - ensuring that buyers around the globe value their grades and certifications.

Calabria was the Roman name given to the district the Greeks knew as Messapia and Iapygia. A steady stream of coins from this district have been discovered over the years. Their age, their pure silver content, and the history attached to them makes them popular silver products in the precious metals market.

Each of these coins hold the value of 2 drachma, hence the name given to the coins - Didrachm. They are crafted using pure silver, and the imprinted images are still visible after all this time.

The obverses bear the image of a horseman riding into battle with spears in hand. Although the coins are old, these designs haven't lost their elegance. In fact, the aged silver gives them a rather regal and mysterious quality.

Taras was the Son of Poseidon according to Greek mythology. He is said to have formed the town called Tarentum, located in the Calabria district. The image of Taras on a dolphin is imprinted on the reverses of these coins.