As the overall markets continue to experience massive volatility, gold & silver prices are quietly consolidating, readying for their next moves...

Several fundamental factors are weighing on economies and markets all around the world.

A plunge in global travel and global trade has added recessionary pressures to what was an already slowing global economy, and there has been a clear return of fear in the markets, brought on by the uncertainties surrounding the coronavirus. If the markets weren't having a hard enough time of dealing with those two fundamental forces on their own, on Sunday evening, we saw a massive plunge in the price of crude oil, which analysts attribute to price and production wars between oil producing nations in general, and Saudi Arabia and Russia specifically.

With all of those factors weighing on the economy right now, market participants have looked to governments to begin announcing and implementing fiscal stimulus programs. Recall that last week, the Fed made one of its rare intra-meeting interest rate cuts, and since the Fed does not conclude its next 2-day FOMC meeting until next week, the markets find themselves stuck in the middle of Fed action, which could even be in the form of the so-called "forward guidance", where even if the Fed doesn't do anything with interest rates one way or another next Wednesday, the Fed clearly "communicates" its next moves so that market participants understand the direction the Fed is moving. Post-emergency Fed rate cut, there is still massive volatility in the markets, and it has market participants on edge, looking for more relief as it seems the Fed's emergency rate cut caused more harm and created more uncertainty than it did cause a positive market reaction.

Hopeful for some relief for the pressure that's bearing down on the markets, market participants are looking to see what can be done on the fiscal side of things to stimulate the economy and support the markets. President Trump has been in talks with various Washington politicians, exploring the US government's options for a fiscal stimulus program which would make it through Congress without too many hold-ups or set-backs. President Trump discussed what he was exploring during a Monday evening Corona Task Force press conference, and the President also made some comments about fiscal stimulus progress being made on Tuesday afternoon at the White House.

Let's take a look at the charts to further explore what's been going on in the markets this week.

Trading was halted for 15 minutes shortly after the markets opened on Monday because of falling 7.0%: 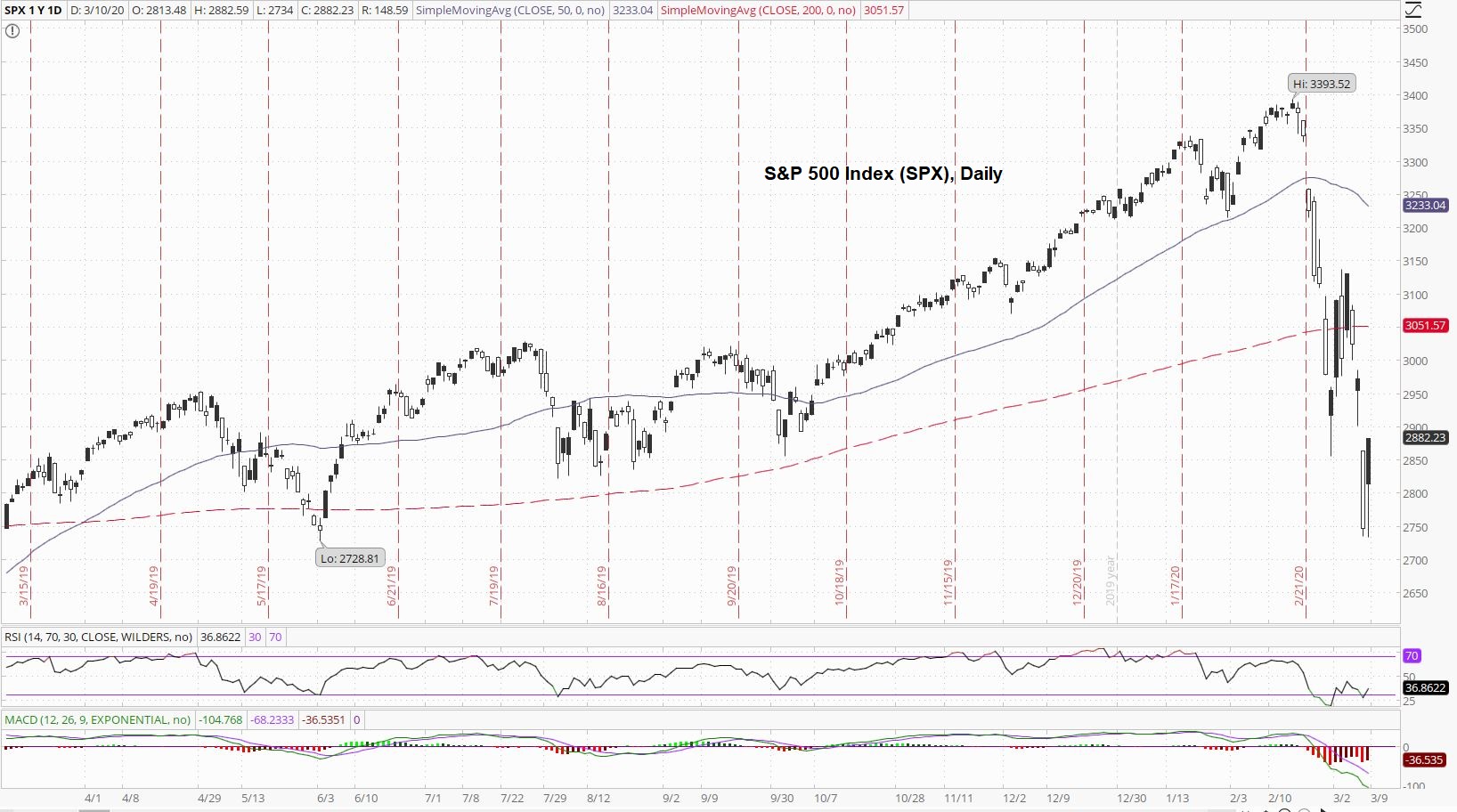 The VIX has stayed above 40 amidst the ongoing market turmoil: 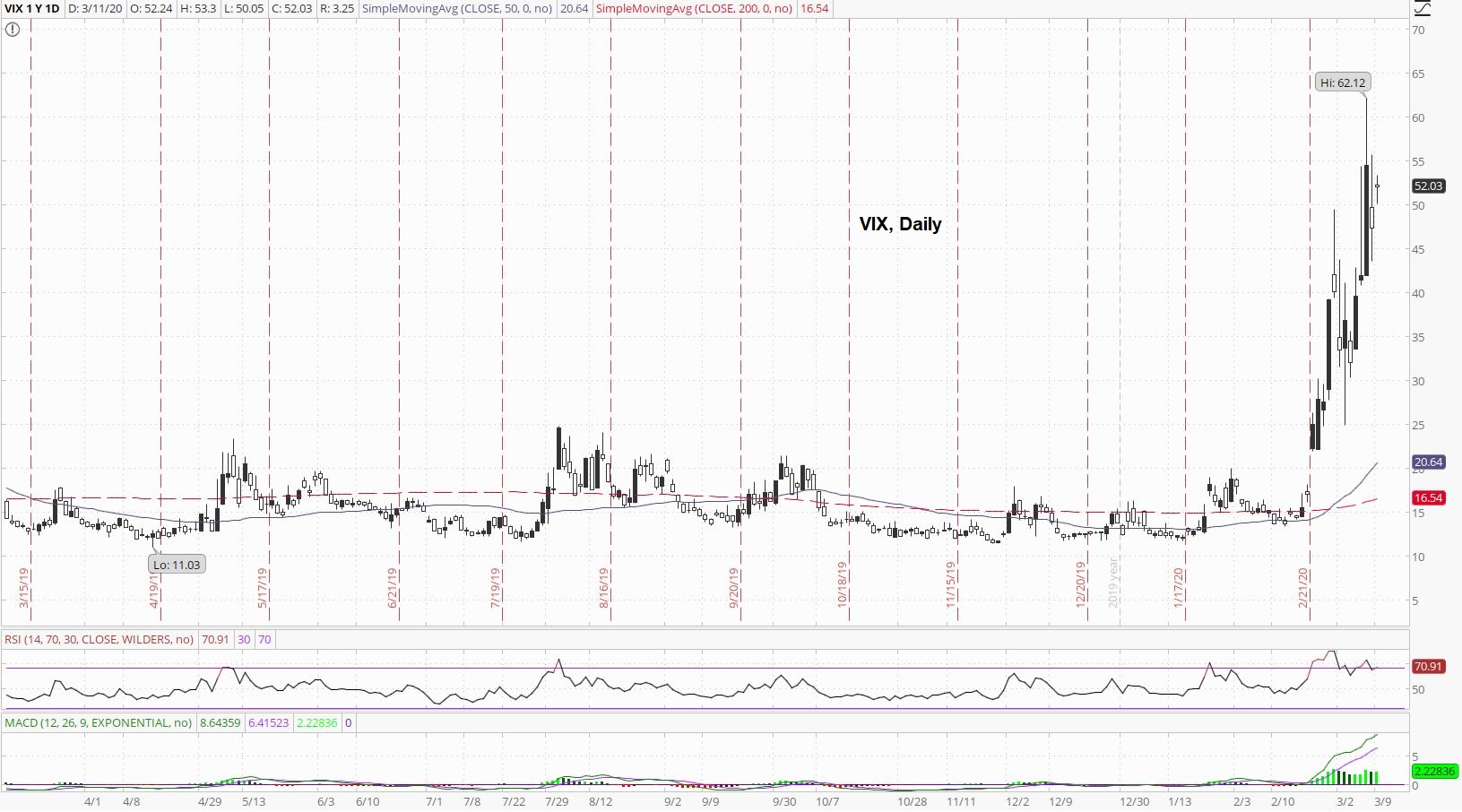 The more the VIX spikes, the more market participants are going to look to want emergency government or Fed intervention. 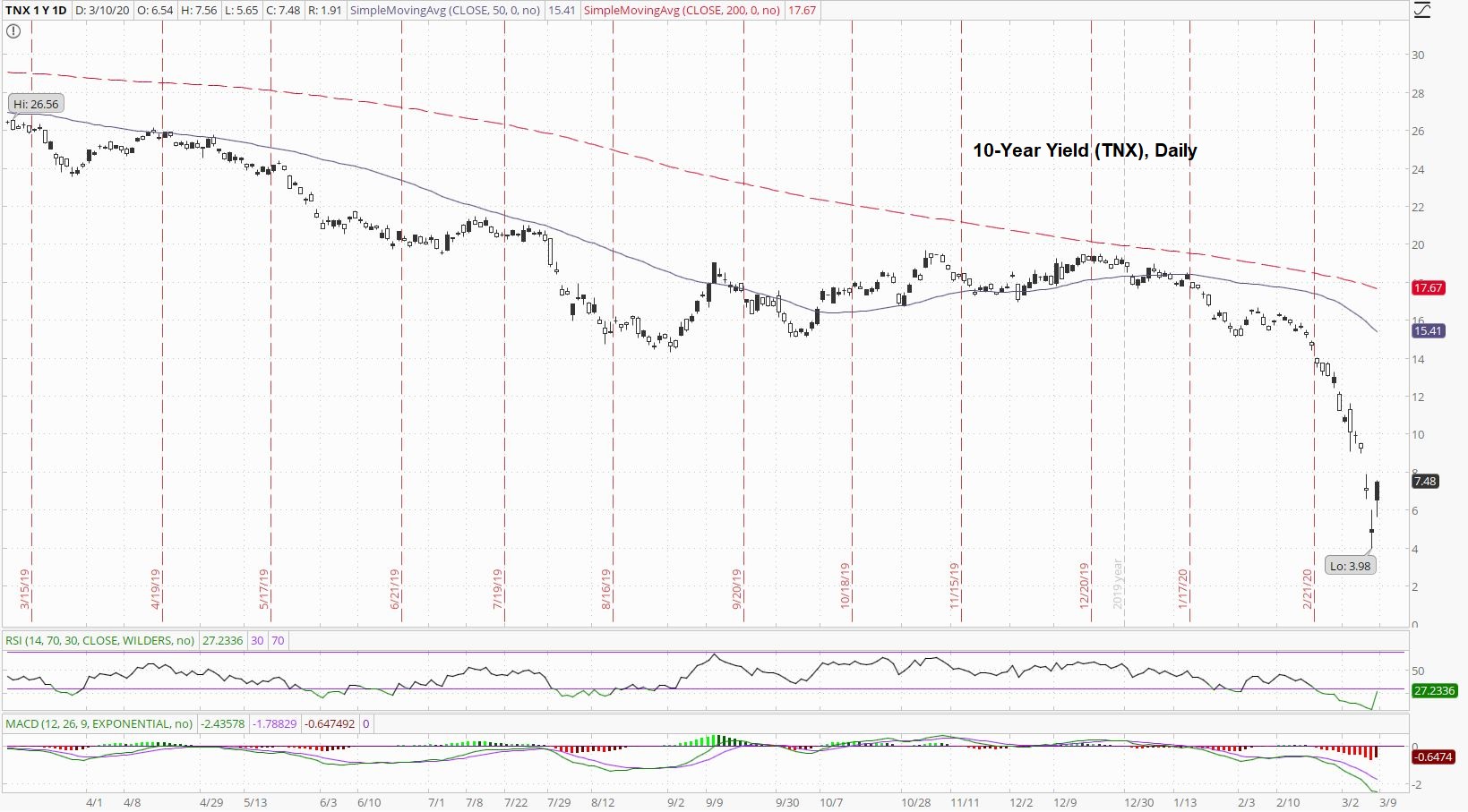 Not shown is the yield on the 30-Year Treasury, the “long bond”, which fell below 1.0% on Monday.

The dollar index bounced yesterday after falling 10 of the last 12 days: 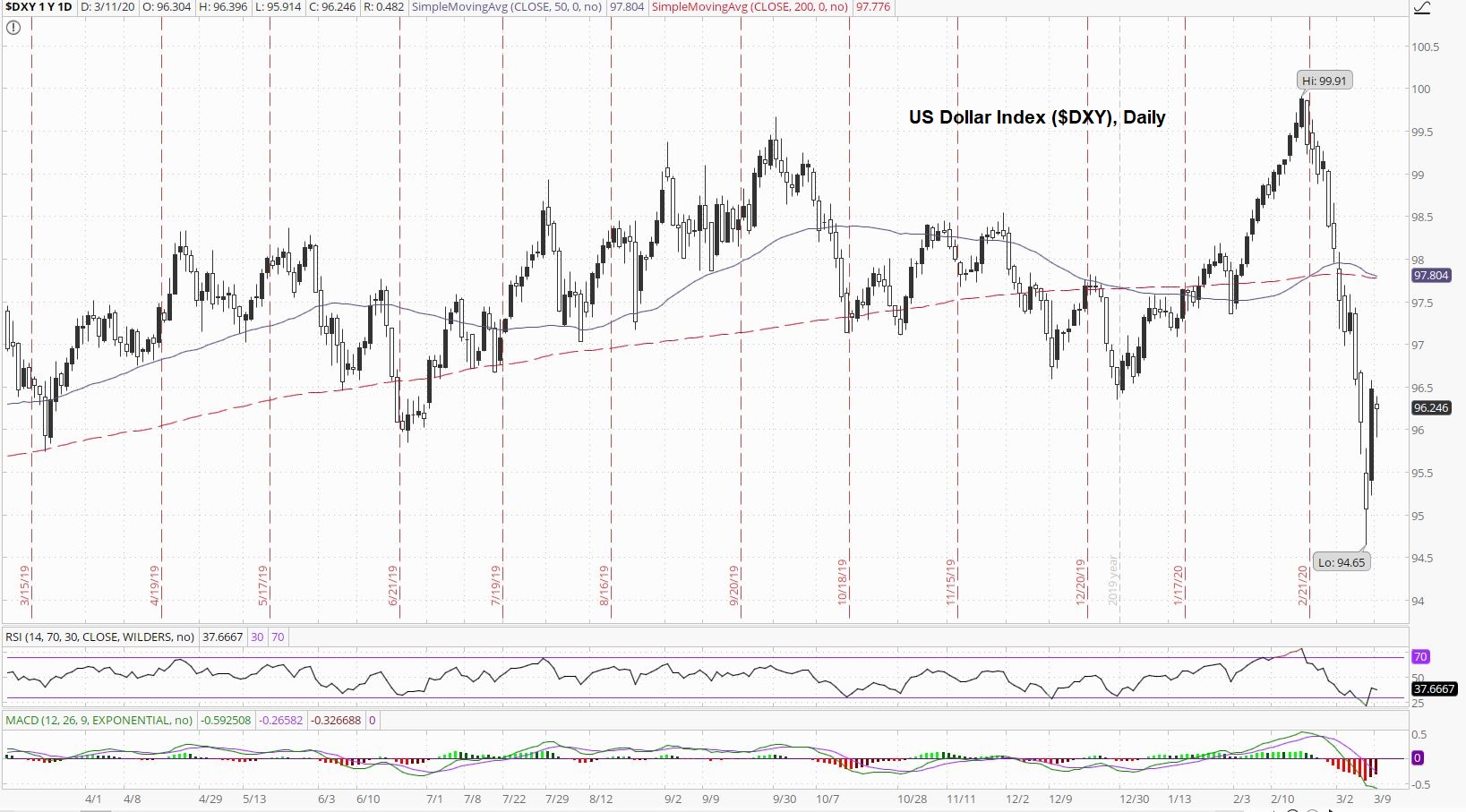 Upcoming fiscal stimulus and monetary stimulus are not just inflationary, but US dollar inflation in and of itself, so the question becomes whether that inflation finds its way into financial assets or makes its way into consumer prices on Main Street?

Here’s a look at the massive plunge in the price of crude oil: 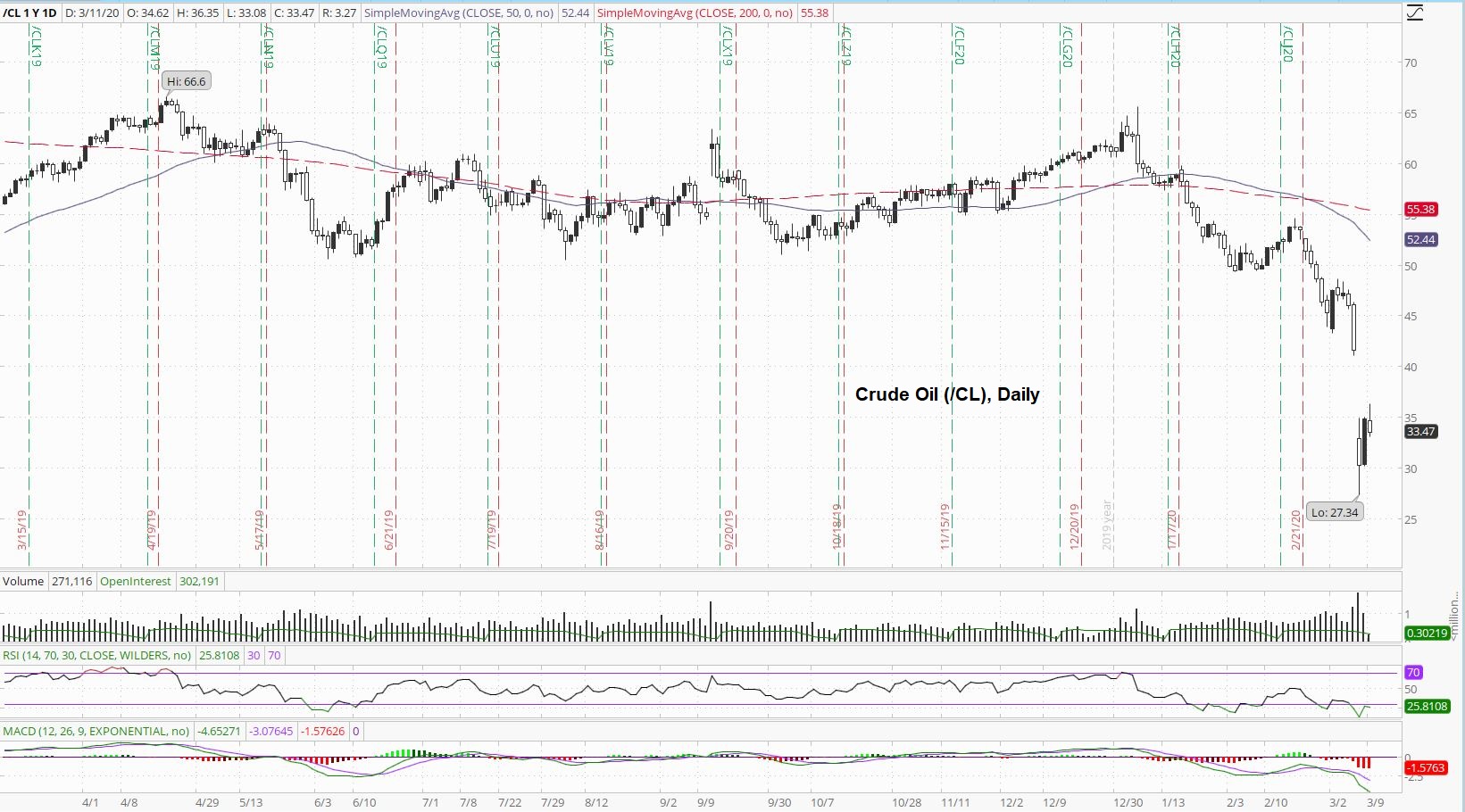 Crude oil closed on Friday at $41.57 and opened on Monday at $32.87, which is a more than 20% plunge, a threshold many analysts consider a “bear market” if crossed to the downside.

If we use 20% as a barometer for bear market territory, crude oil entered a bear market in one day.

Copper, however, didn’t plunge quite like crude oil did: 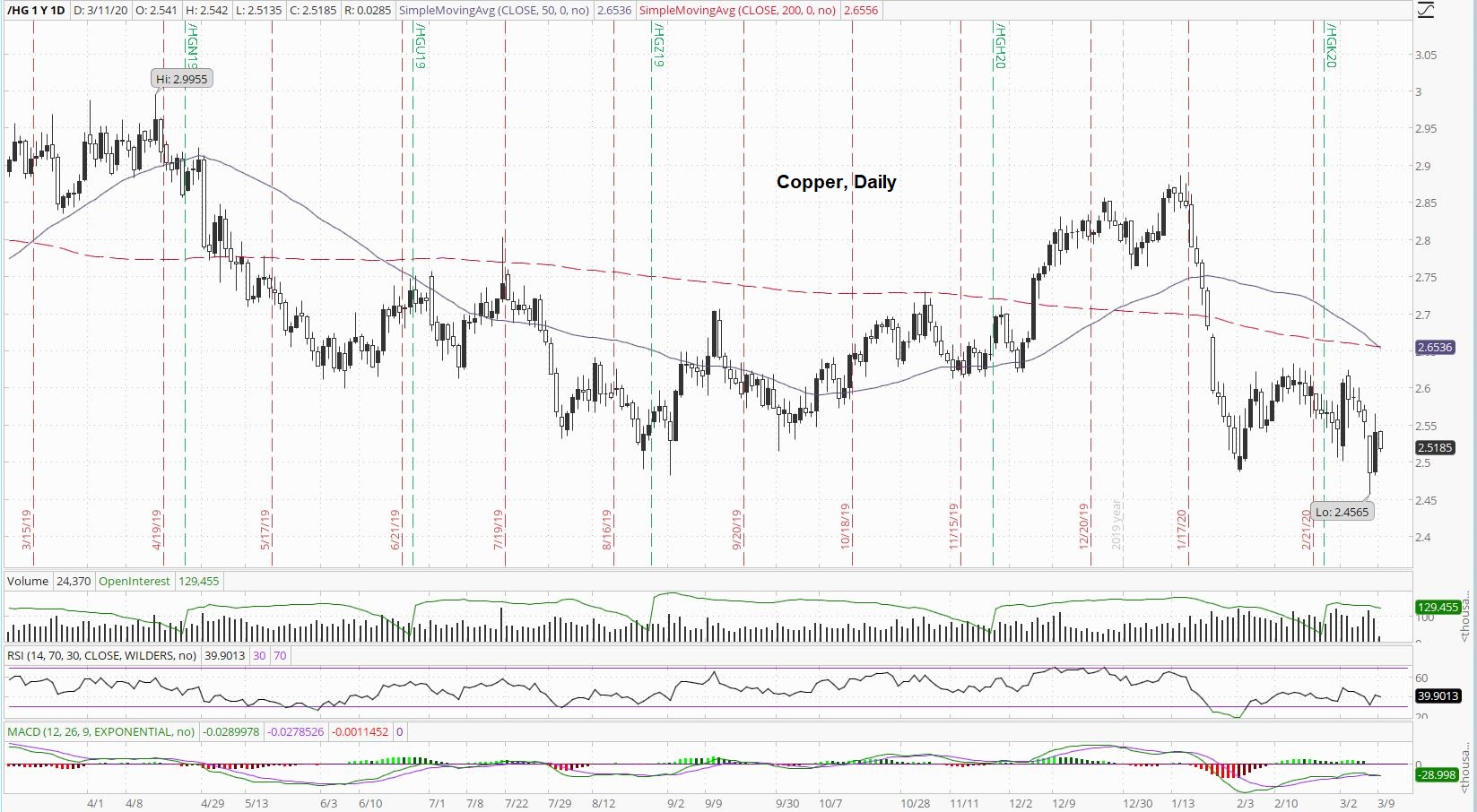 Copper has been in a sideways channel between $2.50 and $2.60, and the red metal looks to be testing the support line of the channel now.

Platinum is banging around in its own sideways channel between $860 and $880: 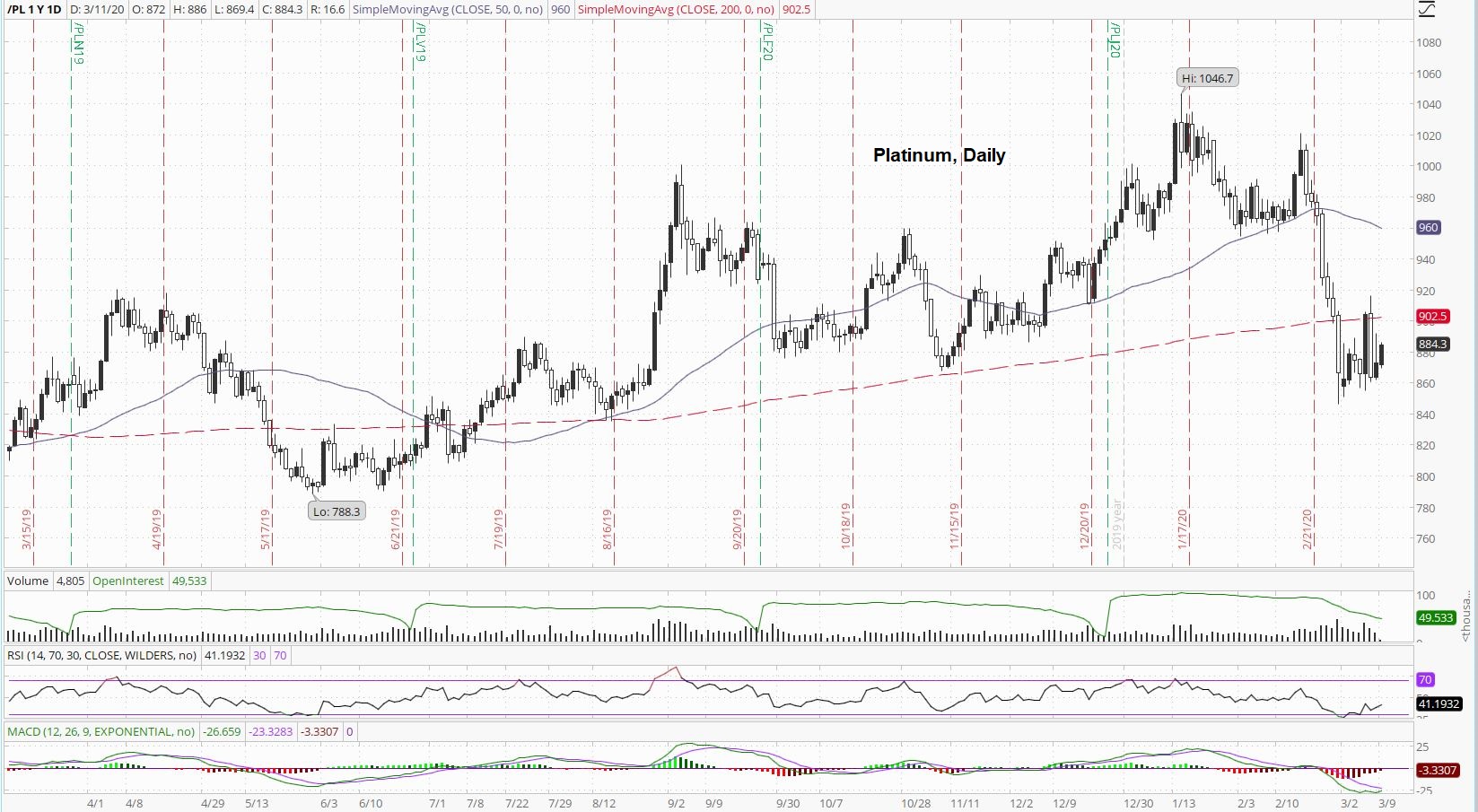 On the one hand, there can be reduced industrial demand for platinum, in tune with a global recession or global depression, but on the other hand, platinum can be the beneficiary of “flight to safety” and “wealth preservation” bids.

Palladium’s pullback is in excess of 18%: 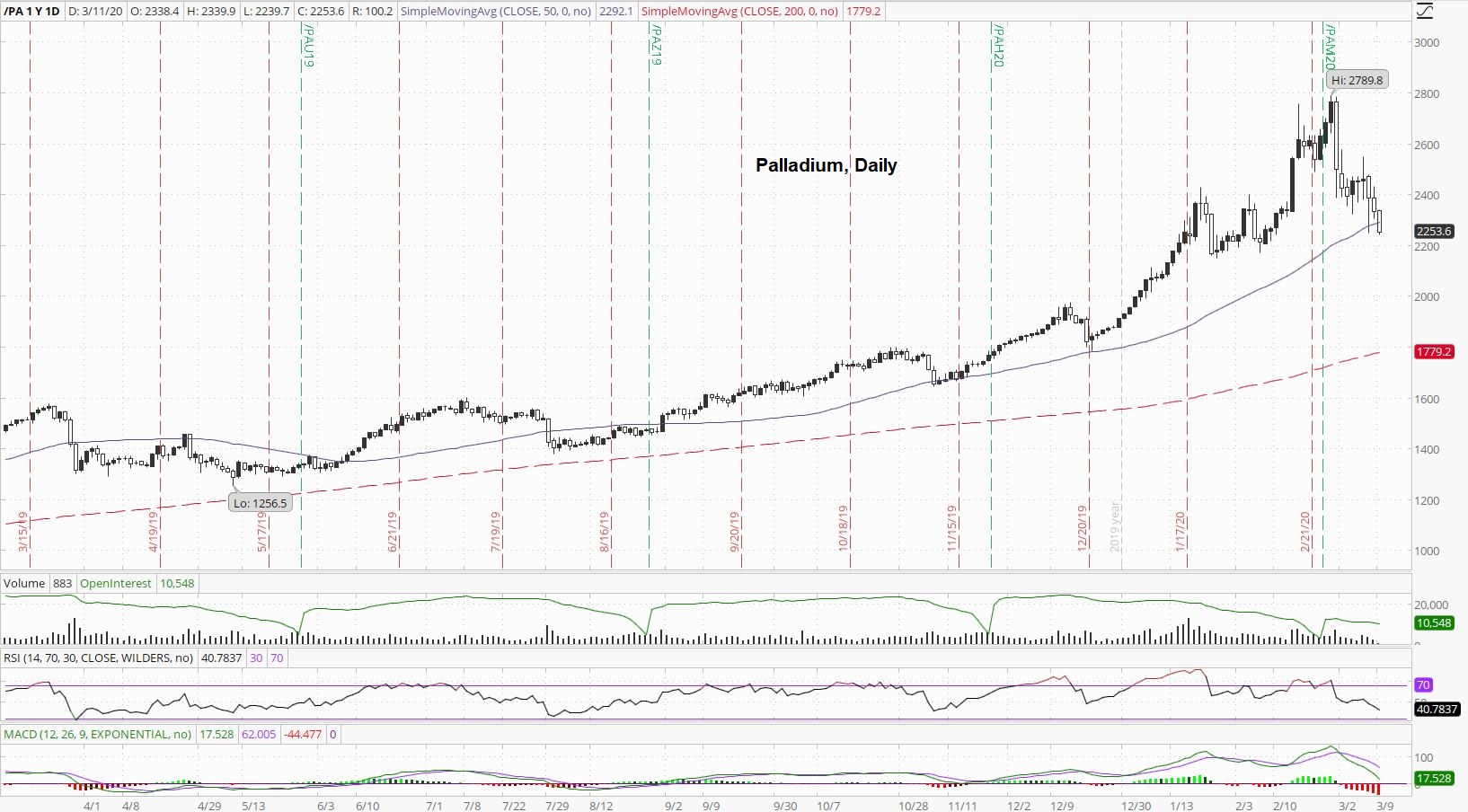 Palladium has periodically tested the support of its 50-day moving average for years, only this time the test is more dramatic since palladium surged so strongly in the middle of February.

The gold-to-silver ratio currently around 98: 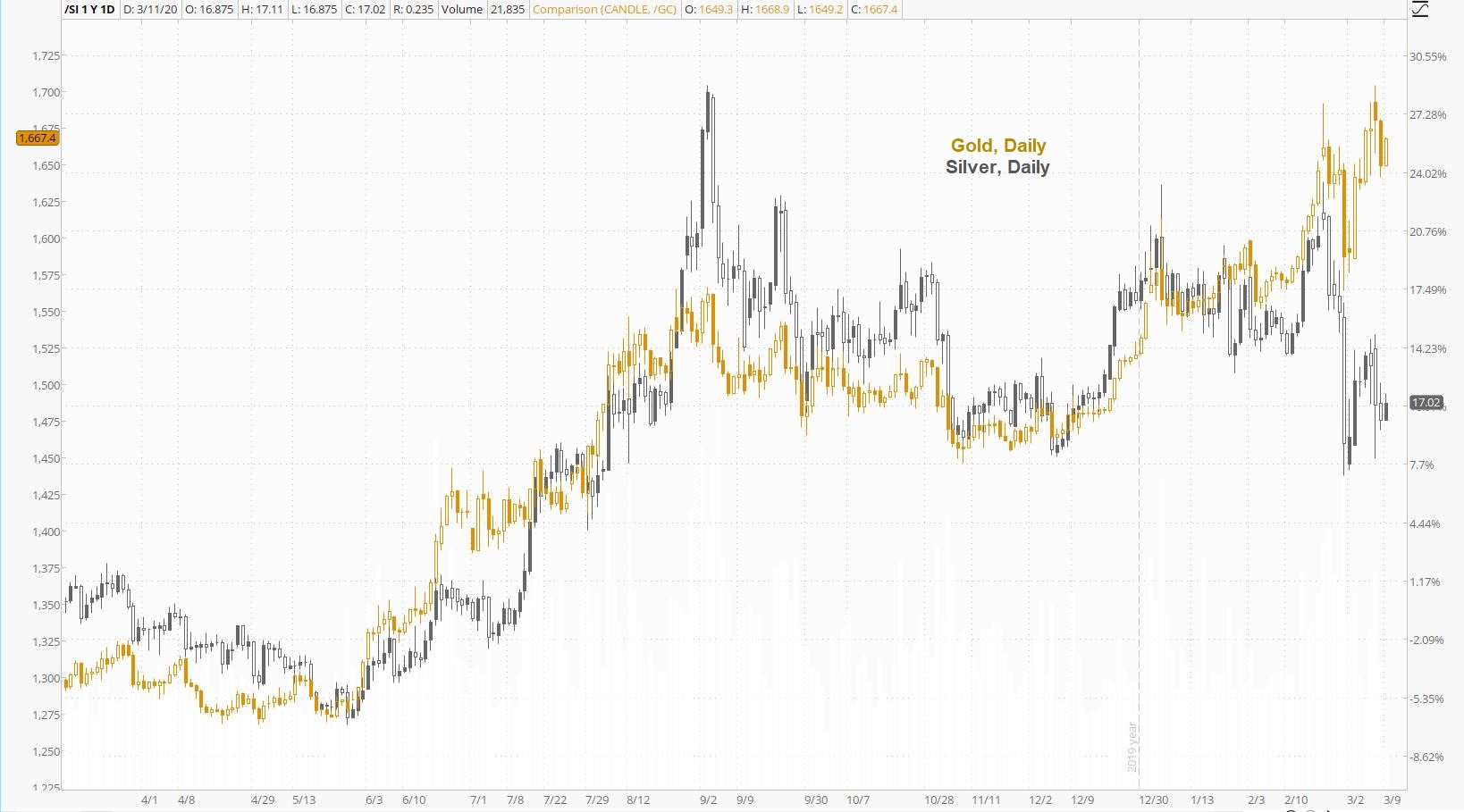 This level is historically very high, and the graph above shows just how much silver has under-performed gold, especially since the end of February.

Gold is consolidating nicely around $1650: 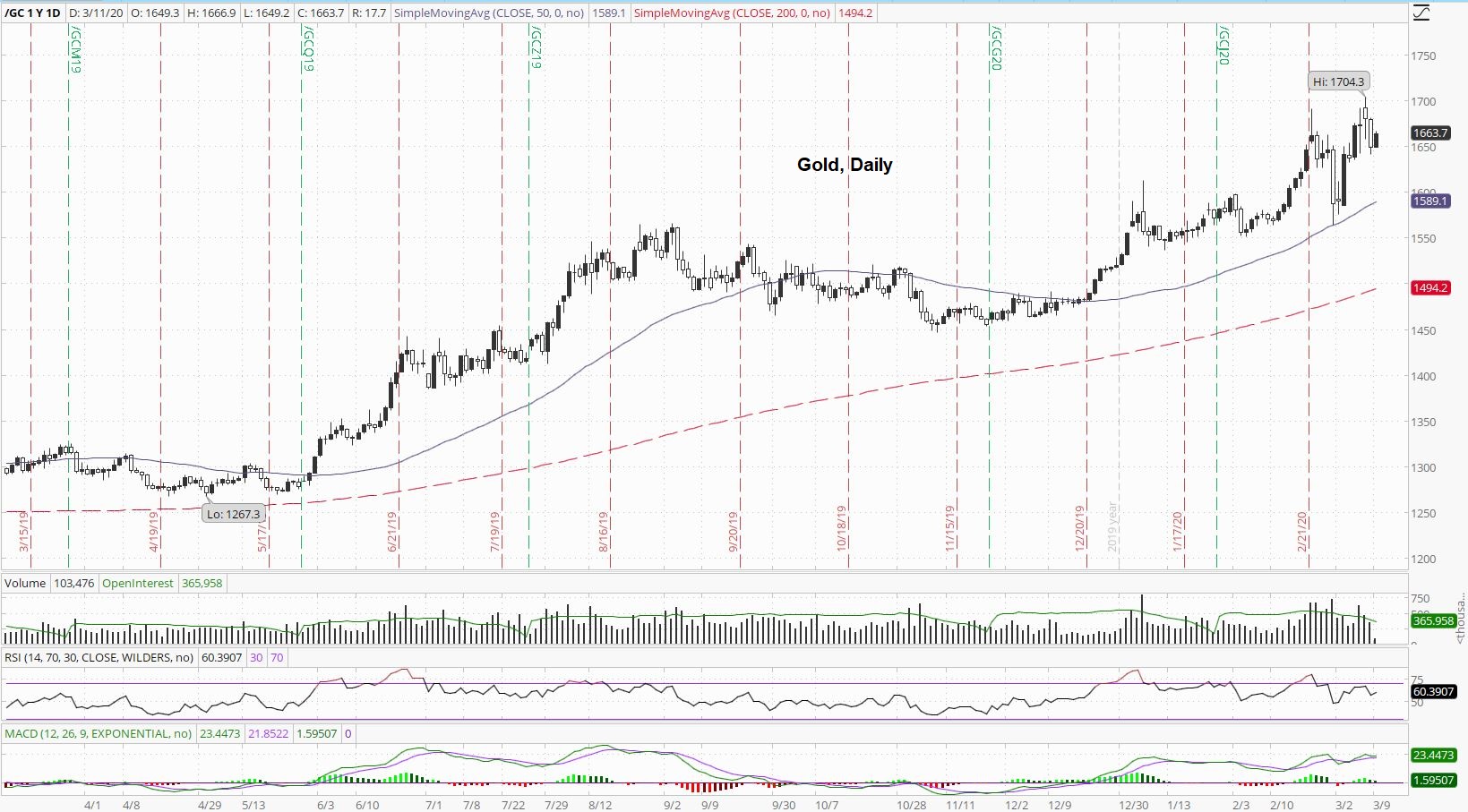 Gold seems poised to remain bid for some time, and consolidations or pullbacks such as the one we’re experiencing now make great entry points for the purchase of physical metal.

Silver is currently consolidating around $17: 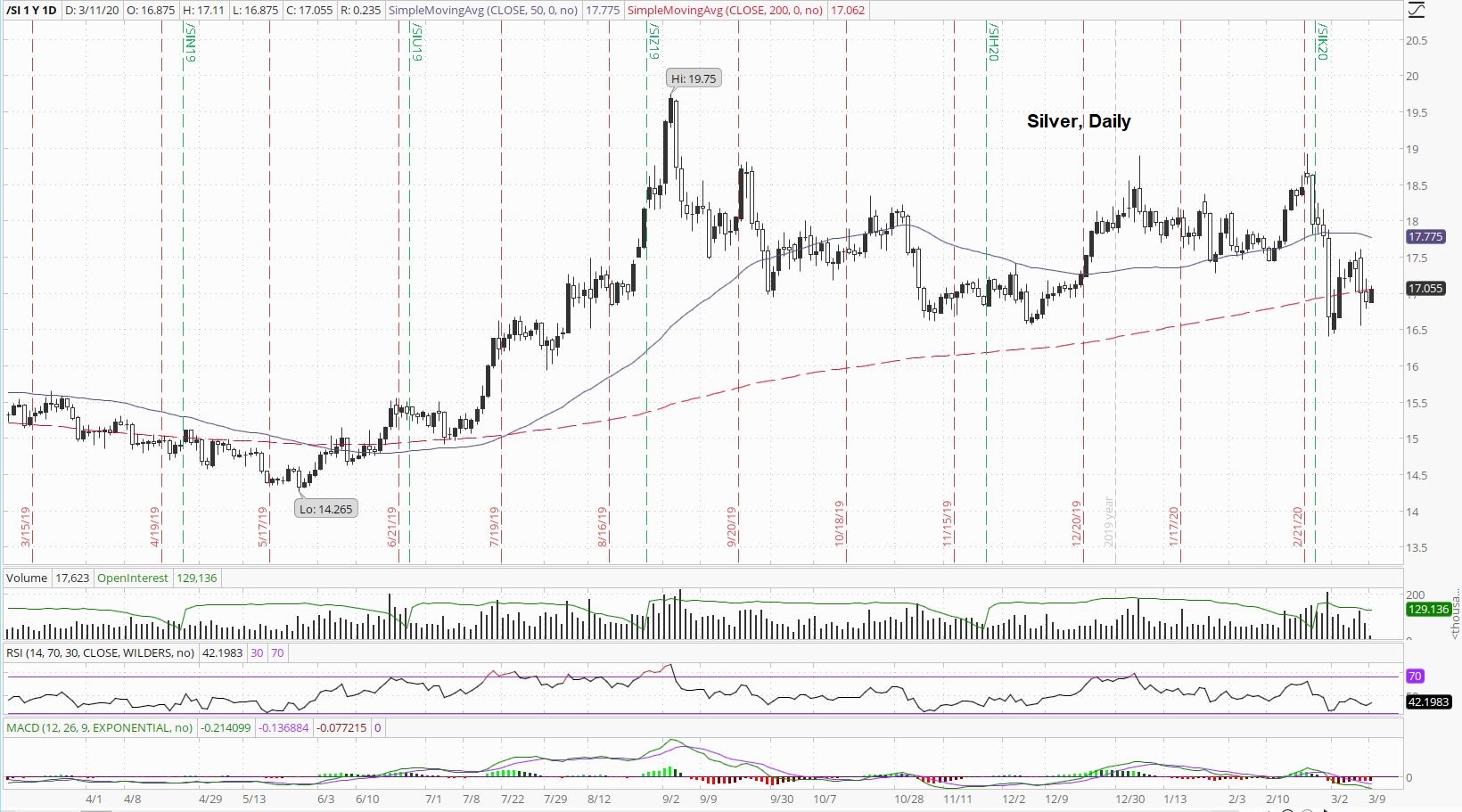 The whole number has shown to be pretty decent support going back to early August of 2019.

It will be interesting to see how this week plays out in the markets.