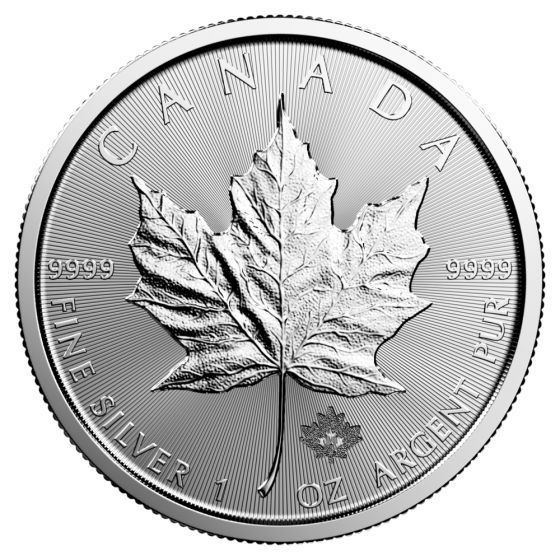 The latest releases under the Canadian Maple Leaf Silver Coin Program will be available at SD Bullion in the coming months! Featuring the gorgeous depiction of a maple leaf on one side and Queen Elizabeth II on the other, these 2019 Canadian Silver Maple Leaf Coins expand this long-running coin program.

The obverse of these Canadian coins feature Queen Elizabeth II, some portraying a younger Queen, some with her as a middle-aged Queen, and some featuring the present-day Queen.This is in line with all other circulating coinage in the country. The obverse also displays the year of issue and the value ($5 CAD).

On the reverse side of the Silver Maple Leaf is a depiction of its namesake, an elegant maple leaf. This design has been the focus of the Canadian silver dollar during its entire lifespan. It is a distinctive design, with sharp detail that gives this coin its status as a treasured collector’s item.

White spots, also called milk spots, are imperfections that compromise the aesthetic quality of silver bullion coins. They appear unpredictably, making them challenging to prevent. After years of intensive research and development, the Royal Canadian Mint developed MINTSHIELD™, a unique manufacturing process breakthrough that reduces the appearance of white spots on Silver Maple Leaf bullion coins. Invisible to the eye and having no effect on the coins’ purity or composition, MINTSHIELD™ reduces the appearance of white spots for years.

BULLION DNA™ Anti-Counterfeiting Technology is an industry first that goes above and beyond other approaches to coin authentication. Every die used to produce SML coins is laser micro-engraved with an anti-counterfeiting security mark. Our registration process—digital non-destructive activation (DNA) technology—captures images encrypted with an algorithm signature and then stores these in our secure database.

Although the Royal Canadian Mint first issued a silver dollar in 1935 (the Silver Jubilee), the Canadian Maple Leaf coins only first came along in 1988. The coin has changed in appearance slightly over the years, with several commemorative designs being released for various occasions, such as the 2010 Winter Olympics, and the 20-year coin anniversary.

The Royal Canadian Mint was founded in 1908 and has produced all of Canada’s circulation coinage since then. In fact, its enormous minting capacity allows it to strike coins for other nations as well. It also mints precious and base metals coins for collectors and investors, medals, tokens, and medallions. Furthermore, it offers gold and silver refinery and assay services as well. Although the Mint serves the public’s interest, it also bears the mandate to ‘operate in anticipation of profit.’ This simply means that it should be able to function commercially without relying on taxpayer funds to continue its operations.

Grab these 2019 Canadian Silver Maple Leaf Coins to complete your sets today! They offer a blend of magnificent designs and pure silver unlike any other.