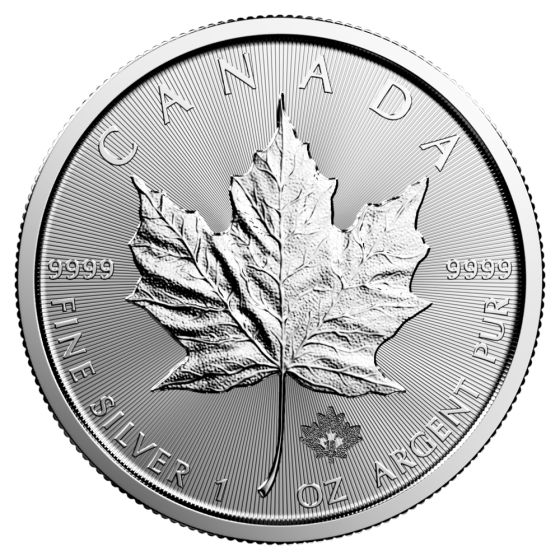 The brilliant 2018 1 oz Canadian Silver Maple Leaf Coins, another illustrious release by the Royal Canadian Mint under the Silver Maple Leaf Series, are now available at SD Bullion. These coins are an annual feature in the precious metals market, and both collectors and investors await its yearly launch anxiously.

This year's coin releases from the Royal Canadian Mint have another incredible surprise baked into them -- RCM's proprietary MintShield™ technology. It is the world's first solution that reduces the white spots commonly found on newly minted silver products. We expect to see this technology used on all subsequent RCM releases from here on out -- raising the Mint's already high standards to yet another level.

Each of these particular Canadian Silver Maple Leafs contains 1 troy ounce of 0.9999 pure silver. As the Canadian Government recognizes them as legal tender, they carry $5 (CAD) face values as well. However, the coin’s face value is merely symbolic because it is much lower in value compared to the value of the pure silver used to strike this coin.

Queen Elizabeth II’s magnificent effigy graces the obverses of these coins. Designed by Susanna Blunt in 2005, this portrayal has remained an integral part of Canadian coinage (circulation and bullion) since then. Furthermore, this portrait is encircled by the Queen’s name, the coin’s face value, and its year of issue.

The reverses of these coins display the incredibly detailed maple leaf design that gives these coins their name. Under the big maple leaf, a tiny textured maple leaf is barely visible. This is a security measure from the Royal Canadian Mint. In fact, when you magnify this tiny leaf, you can see two digits denoting the coin’s year of issue – ‘18’ in this case.

Get the 2018 1 oz Canadian Silver Maple Leaf Coins from SD Bullion and complete your Silver Maple Leaf sets today. These coins offer a perfect blend of magnificent, elegant designs and extremely pure 0.9999 silver content. Hence, they are great investment assets for investors who want to diversify their portfolio with a popular silver coins from one of the top mints in the world.