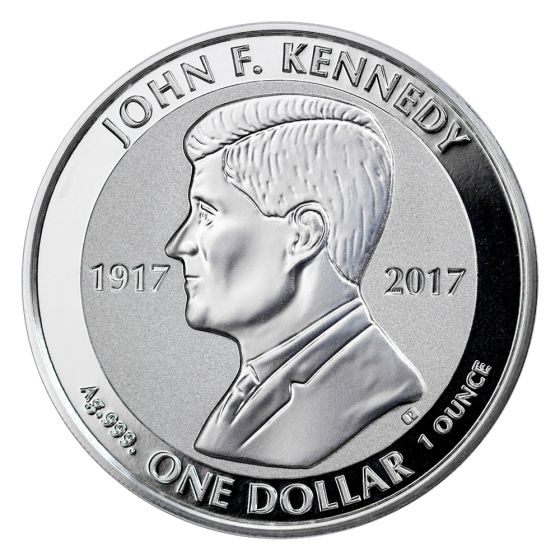 Kennedy was the 35th President of the United States of America. Interestingly, he edged out the incumbent Vice President, Richard Nixon, to grab the most powerful position in the world in 1960. However, he remained in office for less than three years as he fell victim to a tragic assassination that shook the country. He was born in the year 1917 – marking 2017 the hundredth year after his birth.

Each of these coins contains 1 troy ounce of 0.999 pure silver. Moreover, they carry a face value of $1 (USD), as the British Virgin Islands’ currency is the United States Dollar.

Paul Vincze’s depiction of John F. Kennedy is highlighted on the reverse sides of these coins. His left-profile portrayal radiates power and charm, as the President looks straight ahead into the distance.

Celebrate the hundredth birth anniversary of one of the most famous Presidents of the United States of America with these 2017 John F. Kennedy Reverse Proof Silver Coins. They will make a patriotic addition to your precious metals collection, and serve as excellent vehicles of silver investment at the same time. Their limited mintage of just 50,000 coins makes sure that stocks will run dry soon. Collectors and investors should hurry and snag these coins as soon as possible.