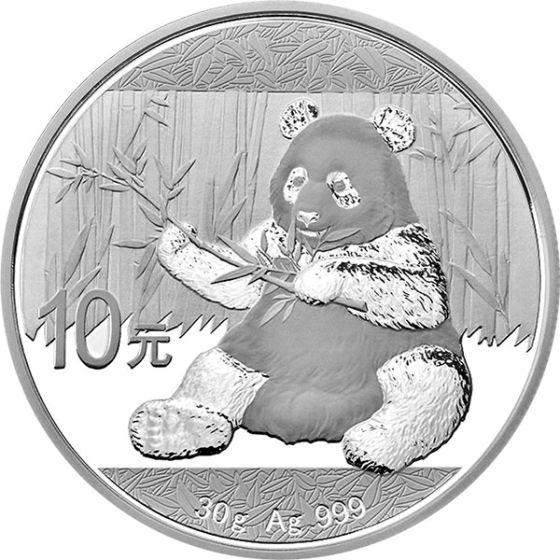 One of the most anticipated coin releases for any given year, the Chinese Silver Panda series of coins has been a popular option among collectors all around the world for decades. The 30g Silver Panda coin is the most popular coin among all variants due to the balance of weight, size, and value it offers.

First introduced in 1983, a year after the first release of their Gold coin counterparts, these Silver coins have remained a popular purchasing option for those looking to acquire quality Silver. This 2017 release marks only the second year since the Chinese mint decided to switch from the imperial scale to the metric scale for greater global penetration.

Each of these coins contains 30 grams of pure 0.999 Silver and are fine products, with its designs showcasing the expertise and attention paid in minting and designing it. Moreover, they are assigned a face value of 10 Yuan by the Chinese Government and are considered money in China.

The reverse of this coin features a majestic Panda, holding a shoot of Bamboo, about to bite into it. The Panda represents one of the most unique animals that are native to China and these coins were aimed at raising awareness about their dwindling population.

The elegant portrayal of the Hall of Prayer for Abundant Harvests; it is one of the many temples housed in the imperial complex called the Temple of Heaven. Encircling this image are the Chinese characters denoting ‘People’s Republic of China,’ followed by the year of release of the coin ‘2017.’

Being the lightest category of Silver coins in the Silver Panda coin release, this product offers great value to those who wish to possess these elegant and annually changing designs in addition to obtaining some quality Silver in the process.