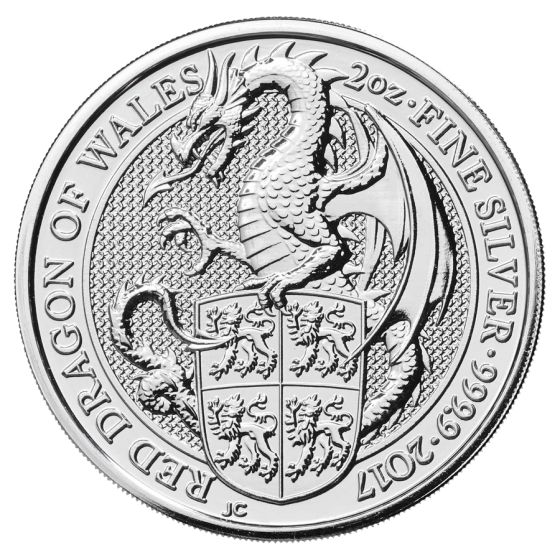 Only the 3rd release in the widely acclaimed Queen’s Beasts series of silver coins, this 2 ounce Red Dragon of Wales coin features the mighty Welsh Dragon design on its reverse. Created by the Royal Mint in remembrance of Her Majesty’s coronation ceremony, this series aims to highlight all of the ten beasts that stood guard there.

Every coin is struck using 2 troy ounces of 0.9999 silver. Additionally, they bear an official 5 Pound (GBP) face value. Orders of multiples of 10 coins are shipped in original mint tubes, while monster boxes are used to ship multiples of 200 coins.

Each of these designs is attributed to the young and talented Royal Mint Coin Designer, Jody Clark. Completely capturing the soul and ideals behind each of the beasts, this Red Dragon of Wales design is as remarkable as his previous work.

The image of the Red Dragon of Wales is seen on the reverse, towering over a shield and clutching it with its powerful talons. Moreover, the coin’s outer rim bears the name of the beast ‘Red Dragon of Wales’ and the year of issue ‘2017,’ followed by the weight and purity of the metal used to strike this coin ‘2 oz Fine Silver 0.9999.’

These coins make excellent additions to precious metals assets, diversifying tangible assets while expanding them with a hefty amount of pure silver. In addition to their investment value, collectors who want to keep their Queen Beast collections up-to-date will snag these 2017 releases soon.