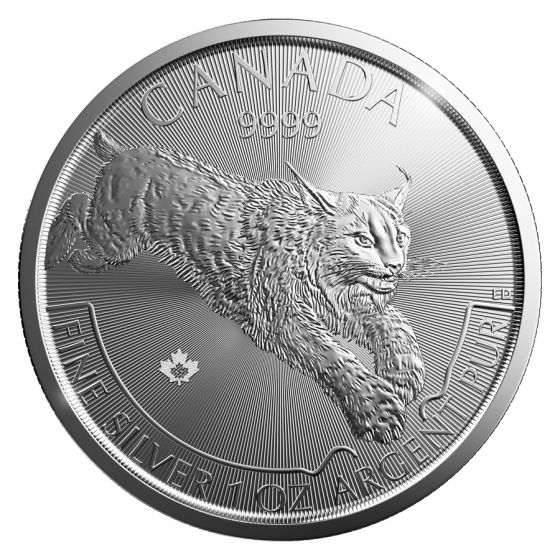 Featuring an image of the elusive Lynx, the 2017 1 ounce Canadian Lynx Silver coin is now available for purchase at SD Bullion. This is only the 2nd coin in the recently started 4-coin Predator series by the Royal Canadian Mint, and many more annual releases are expected to come!

Just like its predecessor, it also contains 1 troy ounce of the finest 0.9999 Silver. Moreover, it bears a face value of $5 (Canadian), fully backed by the Canadian Government.

The Royal Canadian Mint kicked off the Predator series in the year 2016 with the release of the 1 oz. Canadian Cougar Silver Coin.

Since these coins are being released in extremely limited mintage numbers, they have garnered instant popularity amongst collectors and investors alike.

The obverse of this coin features the Susanna Blunt portrayal of Her Majesty Queen Elizabeth. Bearing a regal look, this image shows her right profile, with a kind expression on her face.

However, the design on the reverse of this coin is what gives it its name - the imagery of the majestic Canadian Lynx. Wildlife enthusiasts throughout the world admire its graceful and silent stride. Moreover, since it is one of the most elusive predators prowling the Canadian forests, it is not easy to catch a glimpse of this majestic animal.

Containing a fair amount of Silver of the highest purity, these one ounce Canadian Lynx Silver Coins are a healthy investment opportunity for investors considering the long-term potential for higher returns. Additionally, the beautiful imagery on its reverse will enthuse both wildlife lovers and Canadian coin collectors.