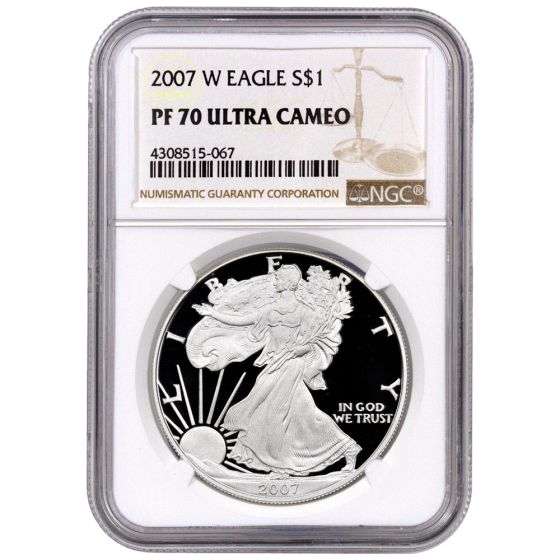 Total Graded Population Of Only 8,401!

Each of these coins contains 1 troy ounce of 0.999 pure silver, and carries a face value of $1 (USD). Moreover, their PF-70 grades indicate that every one of these coins is in pristine condition, while the Ultra Cameo designation guarantees superior contrast between the mirror-finished silver surface and the raised frosted designs.

The American Silver Eagle program is one of the most successful annual coin programs, run by the US Mint. Each of its releases, encompassing three variants – bullion, uncirculated, and proof, is anxiously awaited by scores of collectors and investors. Ever since it launched in 1986, the popularity of this coin program has only grown.

Products from the United States Mint bear mint marks indicating their source, and this particular coin bears a ‘W’ mint mark belonging to the West Point facility. In addition to this mint mark on the reverse, John Mercanti’s Heraldic Eagle rendition also makes an appearance, below 13 stars that commemorate the original colonies of the United States.

These 2007-W American Silver Eagle Proof coins will make valuable additions to coin collections, investment portfolios, as well as gifting items. Moreover, the fact that they have been graded and certified by NGC only increases their demand and value.