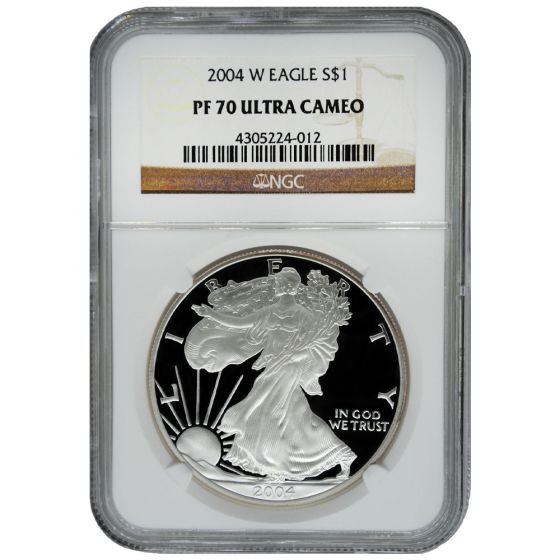 Housed in a clear plastic slab by NGC (Numismatic Guaranty Corporation), these 2004-W American Silver Eagle Proof coins are perfect PF-70 Ultra Cameo specimens. Since they are graded by NGC, people around the world trust and value them.

Ultra Cameo-designated coins have frosted designs that contrast perfectly with the mirror-finished silver surface of the proof coins. Each of these 2004-W American Silver Eagle Proof coins contains 1 troy ounce of 0.999 pure silver, while carrying a face value of $1 (USD).

Ever since NGC was established in 1987, in Parsippany, New Jersey, it has gone on to become one of the largest coin-grading agencies in the world. NGC experts inspect and grade coins on the Sheldon Scale, which is an industrial standard. Coin grades begin at 70 and depending on the severity of imperfections on the coin, a grade of 70 or below is given to it.

Featuring the famed Walking Liberty portrayal by Adolph A. Weinman, the obverses of these proof coins display one of the most beautiful images to be imprinted on American coinage. On the reverse of these coins, John Mercanti’s Heraldic Eagle design is featured, inspired by the National Seal of the United States of America.