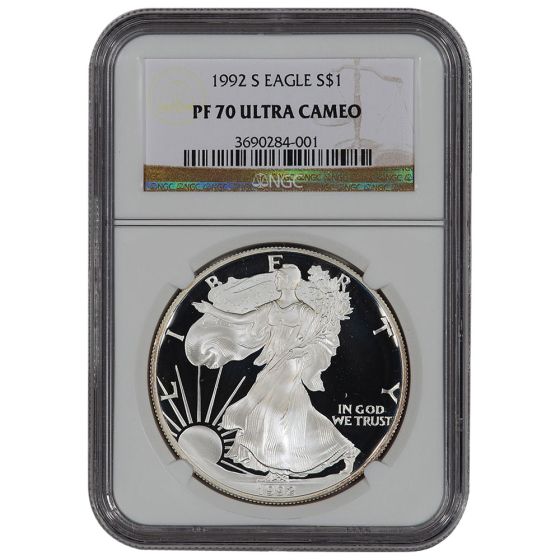 Total Graded Population Of Only 1,089!

These US Mint 1992-S American Silver Eagle Proof Coins are a collector’s delight as their grade of PF-70 Ultra Cameo by Numismatic Guaranty Corporation, guarantees a perfect specimen of the coin with beautiful, contrasting designs.

Proof coins are struck using a special, more precise method of minting, usually due to collector demand for perfect specimens of these coins with impressive designs. A 70 (out of 70) grade on the Sheldon grading scale is assigned by NGC to only those coins that have proven to be free of even imperceptible imperfections.

Numismatic Guaranty Corporation (NGC) is the world’s third largest coin certification service by volume. Having certified more than 35 million coins, Numismatic Guaranty Corporation’s services include authentication, grading, attribution, and encapsulation of coins in clear plastic holders to keep the products safe. Each of these coins contains 1 troy ounce of 0.999 pure silver and carries a face value of $1 (USD).

These 1992-S American Silver Eagle Proof coins were minted at the San Francisco Mint, as the ‘S’ mint mark on their reverses highlight. Established in 1854, the San Francisco Mint is a branch of the United States Mint, which has an interesting history and has steadily grown in size since its inception.

The obverse of the coin displays Adolph A. Weinman’s elegant design – Lady Liberty draped in an American Flag, walking gracefully towards the rising sun. On the other hand, the reverse displays John Mercanti’s Heraldic Eagle portrayal, with 13 small stars that represent the original colonies of the United States.