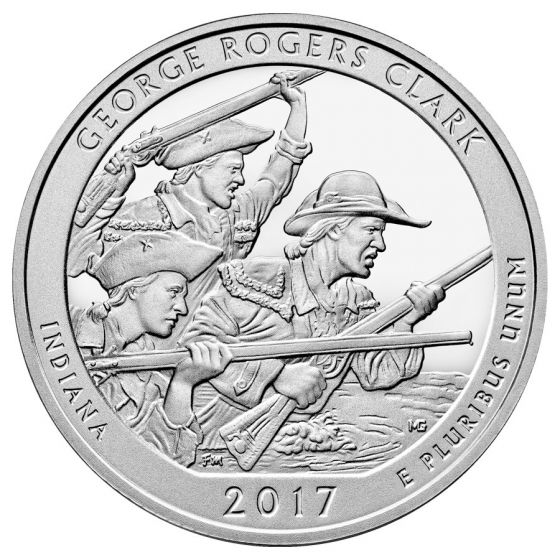 The last America the Beautiful release for the year, i.e. the 5th coin of 2017 and the 40th coin of the series, this Five Ounce George Rogers Clark National Historical Park Silver Coin honors the great state of Indiana.

Each of these silver coins is minted using 5 troy ounces of Silver, with a purity of 0.999. Moreover, since they are shipped in BU (Brilliant Uncirculated) condition, we guarantee a product fresh from the mint.

Although some of these coins may show signs of manufacturing imperfections, such as slight breaks or cracks, these surface defects do not negatively influence the intrinsic value of the pure Silver used to mint them.

The obverse of this coin portrays the side profile of George Washington, the First US President. Debuting in 1932, this design has remained constant on all quarter dollar coinage since John Flanagan created it in the same year.

On the other hand, the reverse of this coin features a group of frontiersmen as they charge toward a British stronghold, following the orders of the famous Lt. Col. Rogers Clark. The defeat of the British at Fort Sackville, at the hands of Lt. Col. Rogers Clark and his battalion, remains one of the greatest military achievements during the American Revolutionary War.

The Fort mentioned above is now named the George Rogers Clark National Historical Park, after the brave Lt. Colonel who led the heroic assault against that British stronghold.

Featuring historically significant imagery and honoring a great state of the United States, Indiana, this Silver Coin is an essential purchase for collectors, who want to keep their America the Beautiful collections up-to-date.