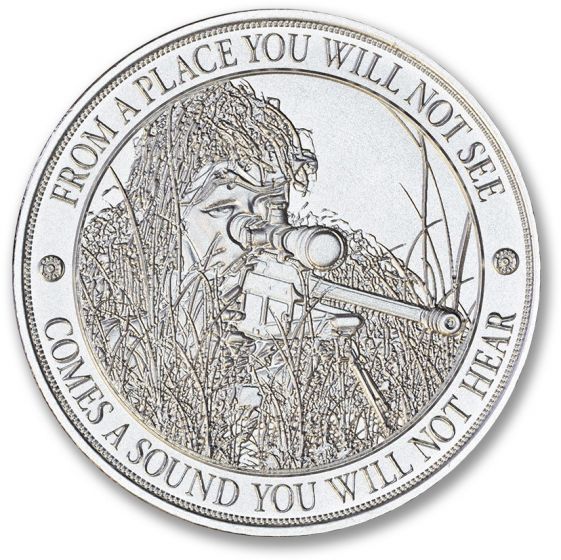 1 oz Trump Promises Made Promises Kept Silver Round
As low as $21.74
Description

This Sniper Silver Round boasts one ounce of .999 fine silver bullion and is made by the Intaglio Mint, based out of Denver, CO.The most deadly sniper of all time is Finnish Army Second Lieutenant Simo Häyhä. He finished his army career with an astonishing 505 confirmed kills. All of which came within a span of fewer than 100 days. His lower left jaw was blown off by an explosive bullet towards the end of the war, however he still lived until he was 96 years old, passing away at a veterans home in 2002. He was once asked towards the end of his life if he regretted killing as many people as he did to which he replied, “I only did my duty, and what I was told to do, as well as I could."

Arguably the most famous sniper in US history is Navy Chief Petty Officer Chris Kyle. He served four tours in the Iraq War, ending his career with over 160 confirmed kills, making him the most deadly sniper in US history. Kyle’s life was tragically cut short on February 3, 2013 when he and his friend were murdered at a gun range near Chalk Mountain, TX.

The obverse of this silver round features a sniper dressed in a ghillie suit using some brush as cover while lining up a shot. Around the rim of the silver rounds are the words “FROM A PLACE YOU WILL NOT SEE COMES A SOUND YOU WILL NOT HEAR”.

The reverse of the Sniper round will feature an intricately designed scope-view with the words “THE SNIPER” above it and “ONE TROY OUNCE .999 FINE SILVER” below. These phrases are separated on either side by bullets along the rim of the round.

Add these Sniper rounds to your silver collection at a comparably low premium over the silver spot price from SD Bullion!