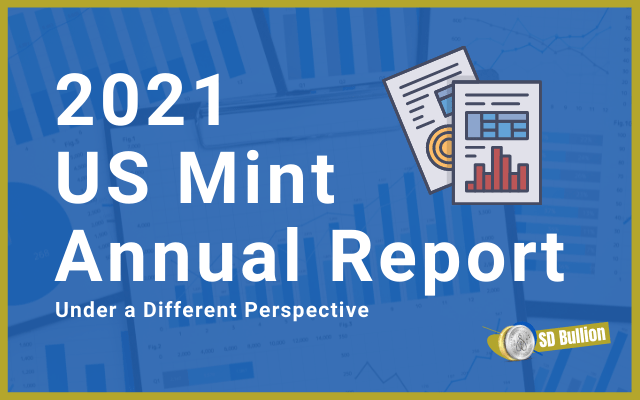 US Mint annual report under a different perspective

Every year the US Mint releases its annual report. Along with a vehement letter from the US Mint Acting Director, Ventris C. Gibson, the Mint disclosed its performance numbers for the Fiscal Year 2021. Those include the revenue from bullion and numismatic products sales and the production and seigniorage of circulating coins.

In short terms, seigniorage is the difference between the cost of producing a circulating coin and its face value. The Treasury General Fund receives the seigniorage to help finance the national debt.

Needless to say, 2021 was an impressive year in terms of bullion production and investment. In the last couple of years, we saw the Federal Government cut interest rates and print high numbers of paper money in an effort to contain a pandemic-driven economic downturn. As a consequence, investors turn their focus to the old reliable precious metals market. Gold and silver bullion have always been considered a safe haven against inflation and fiat currency devaluation.

As a result, the revenue for the US Mint’s bullion program was $3.8 billion, the highest in 20 years. In addition, the numismatic program earned more than $577 million in revenue. With the net earnings from the bullion and numismatic programs, along with the seigniorage from the production of circulating coins, the Mint transferred $120 million to the United States Treasury General Fund.

We can see that US Mint revenue was steadily declining since 2017. The biggest change that occurred to drastically revert this scenario was the increase in bullion sales in 2020. And the climb continued in 2021 when bullion sales increased an incredible 79.9% compared to 2020. The Mint sold a total of 37.5 million ounces of gold, silver, and platinum. Numismatic sales also increased 5.9% in FY 2021. 3.6 million units were sold.

Due to the high speculation and volatility of the cryptocurrency market, Bitcoin, the reigning e-coin, had a huge drop in January of 2022 and is currently fluctuating around $36,000 a unit (as of the time of the writing of this article). Sales revenue of the American Eagle Gold Coins alone were $2,119.1 million in 2021, or, in other words, around 58 units of Bitcoin;

NFTs, or non fungible tokens, are another hot topic of the moment. NFTs, in simple terms, are any form of digital files, such as videos, paintings, audio files, or even texts, that are attached to an encrypted token and recorded on a blockchain, making it unique. The highest selling NFT to this date is a collection of digital paintings by artist Mike Winkelmann, also known as Beeple. Ever since 2007, Beeple has been posting a new digital drawing online and he hasn’t missed a single day! The first 5,000 of those paintings, which took him over 13 years to make, were compiled in a collection entitled “Everydays: The First 5,000 days”. This collection was auctioned at Christie’s in March of 2021 for $69 million. That is an impressive $13,800 per day’s work. Assuming every 5,000 days of Beeple’s work from here on out was compiled in a collection and that each one of those collections was sold by the exact same price of $69 million, Beeple would have to work for 153,557 days, over 420 years, to match the sales revenue of $2,119.1 million for the American Gold Eagles in the Fiscal Year of 2021 alone;

American Silver Eagles and the US Population

The net income of both gold bullion programs (American Gold Eagle and American Gold Buffalo) in 2021 totalized the amount of $63.5 million. That is more than double the value earned in FY 2020. The purchase price for a Tesla Model X starts at $98,940, according to their website. That means the net income for just the two gold coins in 2021 would be enough for the US Mint to purchase 641 Teslas Model X;

SD Bullion and the US Mint

This post is, obviously, intended to amuse and not to be taken seriously. At the same time, to celebrate the hard work of the men and women of the US Mint who continued to deliver top industry products in service of the country, in spite of increased work restrictions and safety regulations due to the pandemic.

At SD Bullion we take pride in having served our many customers in 2021. We are proud to boast over 80,000 positive reviews and, ever since our operations started in 2012, we have executed more than $1 billion in sales.

All US Mint products mentioned above are for sale in our inventory. Make sure to contact our customer support in case you have any questions. You can reach us over the phone at 1(800)294-8732, via email at sales@sdbullion.com, or through our live web-chat feature on the bottom right of your screen.