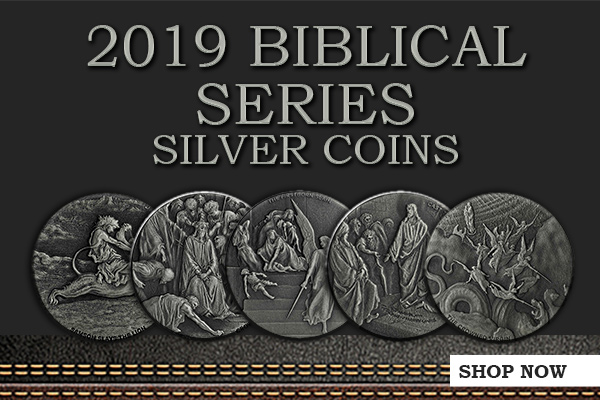 2019 Biblical Series Coins - One of the Most Unique Series Online

About the Biblical Series

The Biblical Series is minted with 5 different designs each year, with the series starting in 2015. The Scottsdale Mint intends on continuing the series until 2024, totaling 50 coins in the series.

The five designs for the 2019 coins are the ‘Crown of Thorns’, ‘Firstborn Slain’, ‘Cast the First Stone’, ‘Crowned Virgin’, & ‘Samson Slays the Lion’.

Each of these coins has a limited mintage of just 1,499 pieces, and this limited availability has contributed significantly to the high demand and collectibility of these silver coins. Additionally, each coin has an individual serial number both on the outside of the box and minted on the reed of the coin.

Also, the coin comes with its own individual certificate of authenticity from Scottsdale that will be inside the Bible box along with the silver coin.

Each coin comes in a gorgeous Bible-like box that is sealed in plastic directly from the Scottsdale Mint. This sealed plastic ensures you are the first person to touch the coin since they left the mint.

While every coin in the Biblical series has a different obverse, but they all have the same reverse. This reverse features Queen Elizabeth II’s young profile in the center. There are words surrounding her on every side, “QUEEN ELIZABETH II” at the top, “2OZ 999 FINE SILVER” to the right, “NIUE TWO DOLLARS” to the left, and the year of mintage at the bottom, in this case it is “2019”.

The Crown of Thorns is a powerful image that is still present in modern-day Christianity. It is said that the crown was placed on the head of Jesus during his crucifixion as a way to cause him pain and mock his claimed authority.

The thorns have been kept in multiple cathedrals in Paris since 1238, and they even survived the Notre-Dame Cathedral fire of April 2019.

The “Firstborn Slain” is in reference to the tenth plague of the Bible. In this plague, God commanded his angels of death to kill the firstborn son of each family in Egypt. The reasoning for God doing this is due to the Pharaoh’s refusal to free the Israelite slaves of Egypt.

God commanded each family that each family who wanted to save their child must kill a lamb and put its blood on their door. This signified that the Christian God was their one true God, and He would spare their child.

”Cast the First Stone” represents a quote from John 8:7 that says “He that is without sin among you, let him first cast a stone at her.” The translation of this quote is essentially only those completely free of sin can judge others. This implies that no one can pass judgement on another, as no one is completely free of sin.

The Crowned Virgin represents the coronation of Mary in heaven. It is said that once Mary reached Heaven, she was crowned by Jesus for her service to the Lord. Most depictions feature Jesus placing the crown on her head with God and the Holy Spirit watching from above.

Samson is known for his supernatural strength and impressive feats that were granted by an Angel of the Lord. It was said by the Angel that Samson could maintain his strength as long as he did not cut or shave his hair.

One of the most famous displays of Samson’s unnatural strength was when he was attacked by a lion. The strength given to him by the Lord allowed him to fight off and kill the lion with his bare hands.

About the Scottsdale Mint

Scottsdale silver products are renowned for their high-quality minting processes. On these Biblical Series, Scottsdale does a wonderful job of antiquing the coins to make them look like they are older coins, when in reality, they were minted this year.

Order these gorgeous Biblical Series as a great gift from SD Bullion before the stock of this series inevitably runs out!