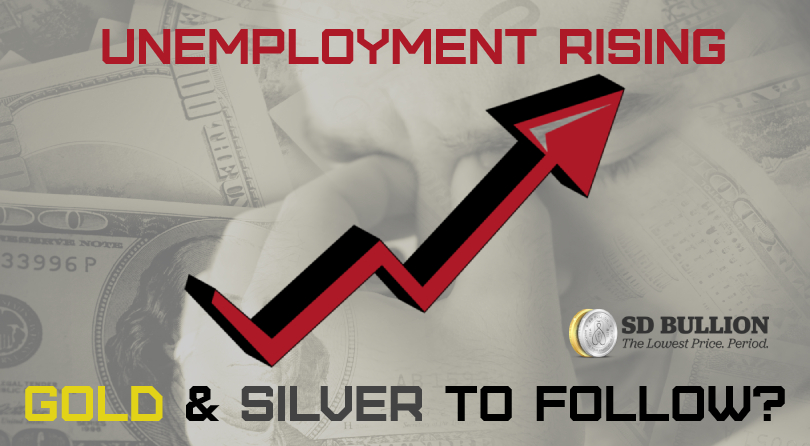 Even with the re-openings of a large number of states and businesses, the job losses caused by COVID-19 continue to add up. With a correlation between unemployment numbers and the precious metals prices, we look ahead to see how the unemployment increase will affect gold and silver.

For the 13th straight week in the U.S., over 1 million people filed for unemployment benefits, with 1.5 million filings last week. Before the COVID-19 pandemic, the record was just 695,000 in a week all the way back in 1982.

Below is a graph for Weekly New Unemployment Claims in the US from March 13th to this past week.

As you can see, the numbers per week have dropped off significantly since the peak at around 6.2 million weekly claims in mid-March. However, the US is still averaging around 1.75 million new claims every week since mid-May.

Effect of Unemployment on Gold Price During the 2008 Recession

During the 2008 economic downturn, for every 1 percent that the unemployment rate increased, the gold spot price increased by 4.7 percent, according to a study done by Stetson University.

Below is a graph showing the comparison between the unemployment percent (blue) and the gold spot price (red) from November 2008 to April 2009:

Effect of Unemployment on Silver

Silver is not as strongly correlated to the unemployment rate as the gold spot price seems to be.

Looking at the same small sample size of January 2020 to May 2020, silver seems to be weakly correlated to the unemployment rate, with silver rising as the unemployment numbers do. This could however just have been a normal market correction after silver dropped all the way to $12 per ounce in March. See chart:

If history holds true, the spot price of gold could be going up in the near future due to the increasing unemployment numbers, so now might be a good time to lock in your purchase of gold bullion at the lowest prices online at SD Bullion.