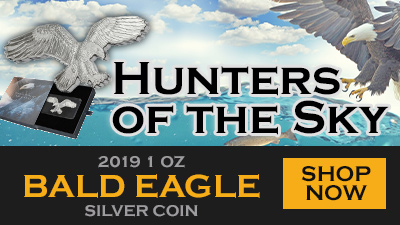 FIRST EVER Eagle-Shaped Silver Coin Minted in the World

SD Bullion is proud to have the first-ever eagle shaped coin ever made in the world available for purchase while supplies last!

This Hunters of the Sky Bald Eagle Silver Coin is minted by the PAMP Suisse Mint using one troy ounce of .9999 fine silver. Whether PAMP is minting using silver, gold, or even platinum, they pride themselves on their items being at least .9995 in purity.

The obverse design is very intricately minted by PAMP, with each individual feather being distinct from the next. The Each eagle coin has its own individual serial number minted into it in the middle of the reverse design.

This eagle-shaped coin would make a wonderful gift for a loved one, as evident by the coin being included in our Doc’s Holiday Collection.

The Hunters of the Sky Silver Coin Series was started by the PAMP Suisse Mint in 2019 with this Bald Eagle coin. They plan to continue the series with the Red-tailed Hawk coin in late 2019 and the Great Horned Owl coin in early 2020. They also plan on continuing their Hunters of the Deep series as well with the Hammerhead Shark and the Tiger Shark.

Every coin minted in the series will come with its own beautiful display box, along with an individual certificate of authenticity, and a sealed capsule to ensure the coins stay beautiful for many years to come.

About the Pamp Suisse Mint

PAMP Suisse was founded as a small refinery in Ticino, Switzerland. Since then, it has grown into a major global supplier of a variety of precious metals. Anyone involved in the precious metals markets are sure to instantly recognize their name and associate it with excellently crafted bullion products.

PAMP is most famous for their line of gold bars, which are some of the most popular gold items on SDBullion.com. They mint gold bars in sizes ranging from one gram all the way up to one kilo and everything in between.

Secure your piece of the inaugural coin in the Hunters of the Sky from the famed PAMP Suisse before they’re gone! These coins would make a great collectible gift that lasts a lifetime for someone in your life this holiday season!