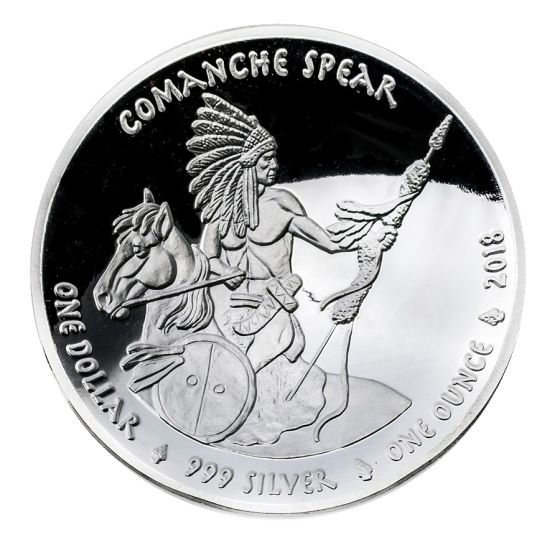 SD Bullion is pleased to announce a spectacular release in the 8-coin Curved Weapon series from the Native American Mint. These 2018 1 oz Comanche Spear Silver Proof Coins will allow you to add a token of Native American culture, pure silver, and gorgeous designs to your collections.

The Comanche is a federally-recognized Native American nation within the United States. Many such Tribal Nations are authorized to strike and sell legal tender commemorative bullion coins such as these to further their culture and heritage within the United States.So, every coin released under the Curved Weapon Series commemorates the weapons that were used by Native American tribes.

This particular coin is focused on the Comanche tribe and their weapons of choice, the deadly spear. Comanche spears or lances were feared on the battlefield because they were crafted using obsidian and were quite well-constructed. A single, well-positioned jab was often enough to bring down the strongest of horses and enemies on the battlefield.

Each of these coins contains 1 troy ounce of 0.999 pure silver. Moreover, they're backed by the Native American Comanche Nation and carry face values of $1 (USD) each.

This coin's reverse features the awe-inspiring depiction of a Comanche warrior on horseback, brandishing their tribe's weapon of choice, the Comanche Spear.

On the other hand, the obverses display a gorgeous, hand-crafted portrayal of a Native American war shield. The colorized nature of this design adds to the beautiful rendition of the shield, making it seem quite real and intimidating. It's very possible that this feeling might've been shared by a few enemies of the Comanche when they saw these fearsome shields on the battlefield.

These 2018 1 oz Comanche Spear Silver Proof Coins are perfect gifts for those who are interested in the rich history of the North American continent and great additions to precious metals portfolios for diversification. Proudly display them, stack them and add to your investments, or gift them to someone -- with these silver coins, you can't go wrong.