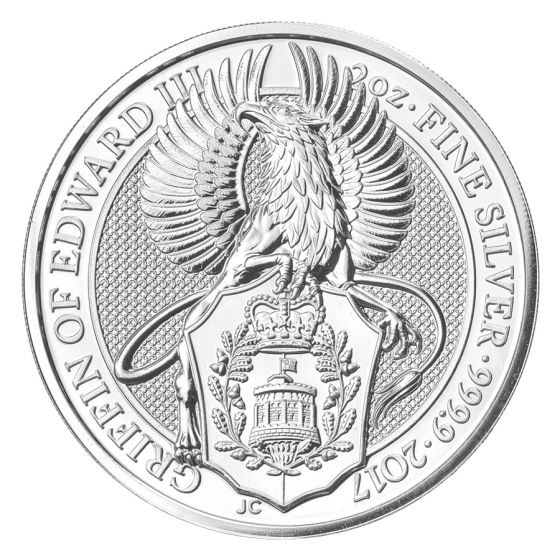 The much-awaited second Silver coin in the Queen’s beast collection of bullion coins, made by the British Royal Mint, is now available to purchase on SD Bullion. Designed by a renowned coin designer, Jody Clark, this 2017 release features the proud Griffin on its reverse.

Moreover, this coin is an essential purchase for those who wish to collect all the designs in this collection; this Silver variant offers a cost effective method of acquiring these beautiful designs while obtaining a healthy amount of pure Silver at the same time.

Each of these coins contains two ounces of pure 0.9999 Silver. In fact, these coins minted by the Royal Mint are one of the purest Silver bullion coins on the precious metal market today.

On the reverse of this coin, the portrayal of the mythical Griffin can be seen, with outstretched wings over its head. Ancient myths describe The Griffin as the most powerful of all beasts, with the wings, talons, and head of an eagle coupled with the strong body and hind legs of a Lion. Furthermore, its talons are seen gripping the front of a shield while the image is encircled by engravings of the weight, metal, purity, and year of issue of the coin.

The obverse of the coin features the fifth portrait of Her Majesty Queen Elizabeth II, created in 2015 by Jody Clark, the youngest artist ever to capture the image of the Queen that is imprinted on legal tender in the United Kingdom.

Additionally, these coins bear a face value of 5 GBP and are considered legal currency in the United Kingdom. Hence, the pure Silver and backing of a sovereign government coupled with the fact that it bears breath-taking design work ensures that this coin will remain a hit among collectors and investors alike.