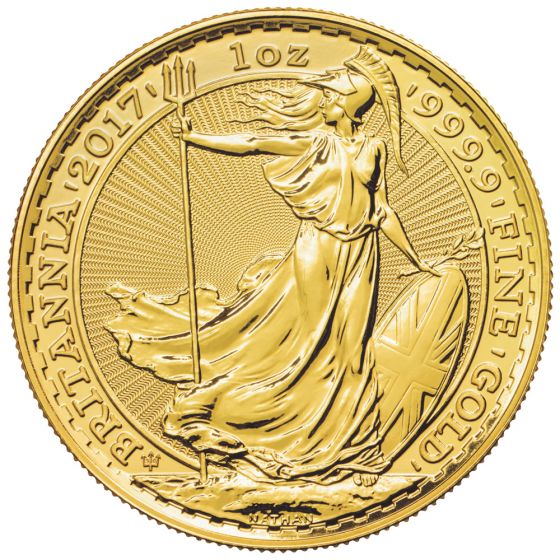 Celebrating the 30th anniversary of the famous series of gold coins, the Royal Mint has released the 2017 issue of the Gold Britannia Coin. With a limited mintage of only 7,030 coins, collectors and investors will absolutely love adding these coins to their precious metals collections and portfolios.

Each of these Gold Britannia coins contains 1 troy ounce of 0.9999 pure gold, bearing a face value of 100 GBP. Moreover, these coins are accepted as legal tender in the United Kingdom, indicating the official backing of the Crown of Britain.

The first Gold Britannia Coin was released in 1987, exactly three decades ago, making it one of the longest-running as well as popular coin series in the world. Ten years later, in 1997, the Royal Mint introduced the first Silver Britannia Coin and added it to the annual release schedule under this program.

Holding a trident firmly with one hand, while the other clutches a shield an olive branch, Lady Britannia makes her familiar appearance on the reverses of these coins. This design, created by Philip Nathan, portrays the mythical Goddess who is said to defend the shores of Britain with her shield, which is emblazoned with the Union Jack. The bottom-left side also displays a special mint mark (the head of a trident with a “3” and “0” between the spikes) that honors the 30th anniversary of these gold coins.

On the other hand, the obverses of these gold coins feature Jody Clark’s rendition of Her Majesty Queen Elizabeth II’s portrait. It is the fifth depiction of the Queen, ever since she ascended the throne in 1952.